Laurie and Allison were two friends from Santa Fe, NM, and Long Island, NY, respectively, and while Laurie was a fairly new birder, Allison was really new, so we figured a general jaunt around Hidalgo County would do the job.  What dampered the experience somewhat was a major cold front that came in the day before (in fact, they had gotten caught in the middle of it while visiting Hugh Ramsey in Harlingen), so things were very quiet when we arrived at Estero Llano Grande.  A Long-billed Thrasher was giving its dulcet tones in the parking lot, but thankfully they had seen that bird well at Ramsey!  Heading into the Tropical Zone we heard a Couch’s Kingbird (even working up his sneezy dawn song), but we never could find him; however, a tittering Tropical Kingbird near the new blind put on a great show!  We sat in the blind for a while, and while a Ladder-backed Woodpecker and Clay-colored Thrush showed up in some trees, visibility was awkward, so we headed towards the drip where after a long wait the Orange-crowned Warbler finally came in.  A little more action was at the next door feeders with a couple of White-tipped Doves and a Green Jay, but we eventually headed out and towards the VC. 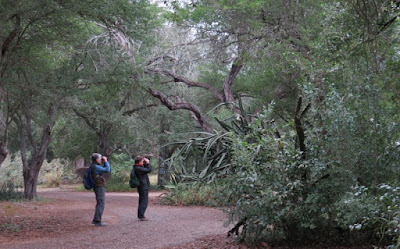 Checking out the feeders in the Tropical Zone

With the overcast skies, visibility was great looking into Ibis Pond!  Javier DeLeon (the park super) greeted us on the inside and showed my charges how they could peek at the blackbirds through the windows there (the Common Grackle apparently was elsewhere)!  We had marvelous scope views of all three teal, Least Grebe, and Shovelers, as did Mike from Salineño and the group from Wimberly that was staying with us at the Inn that we just happened to run into!  As we were enjoying the ducks a young Cooper’s Hawk came tearing in and dove into the bushes while a Fox Squirrel jumped up onto the platform feeder to watch the proceedings!  The hawk flopped in and out and eventually stood on the feeder while sparrows and blackbirds went every which way! 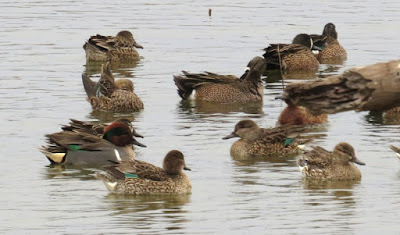 All three teals - can you find them? 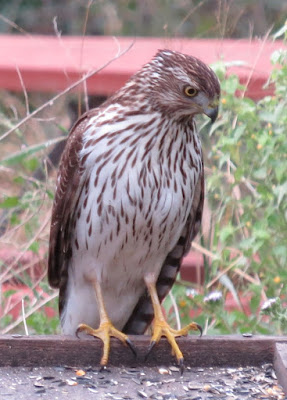 The group camped out at the hummingbird feeders, so we took that opportunity to squeeze by and get going on the trail to Alligator Lake.  Halfway to Dowitcher Pond I heard a Swamp Sparrow peeping from the reeds and sardonically commented that we’d never see him, when suddenly a little dark dot caught my eye (that in itself was a miracle), and it was the Swampie!  Even more of a miracle was the fact that he stayed put long enough to get the scope on him, and by that time even the Wimberly group caught up and were able to get on him!  We hurried on but didn’t get far as the little sparrow group from several visits ago that consisted of several Lincoln’s and a Grasshopper hopped up again, and the Grasshopper was practically within touching distance!  What a looker! 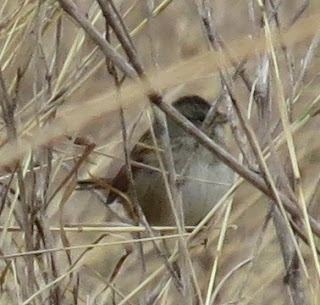 Swamp Sparrow hiding in the reeds 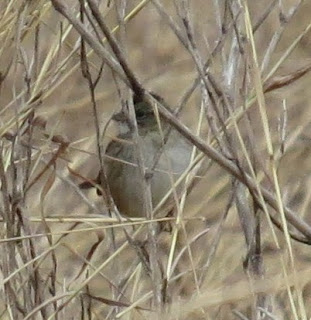 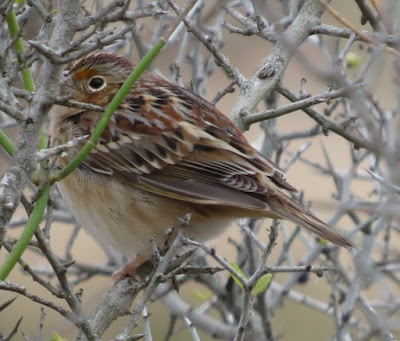 Nothing much was at the pond, so we headed for the bridge when I heard the Green Kingfisher ticking!  Unfortunately I couldn’t find him from the bridge (and he was in the off-limits area anyway), and we never could kick him up again.  Thankfully the night herons were impressive, and we had two Neotropic Cormorants, three Tricolored Herons, Cave Swallows swooping low (affording great looks at their plumage), and “Pancake” the Pauraque (that got to be the running joke the rest of the day as that’s what Allison was calling it J)!  Unfortunately the Screech Owl was a no-show, but the Anhinga pair was at the overlook as a consolation prize.  The Wimberly group was catching up with us (and there was another group to boot), so we took the long way back to cross Dowitcher Pond to give them their space; a skein of Snow Geese flew by in the distance at one point, and our end of the pond had Least Sandpipers but nothing else.  Back at the feeders a nice Buffbelly came in, to the delight of a couple of photographers standing there! 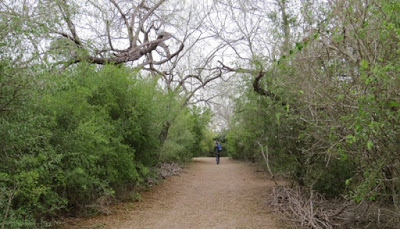 Laurie along the "Pauraque Path" 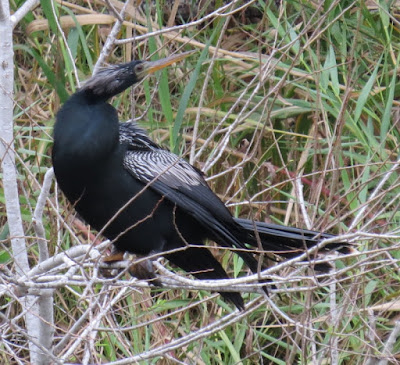 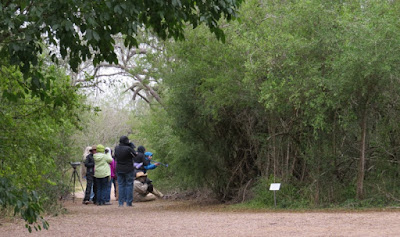 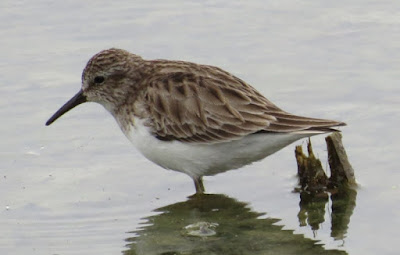 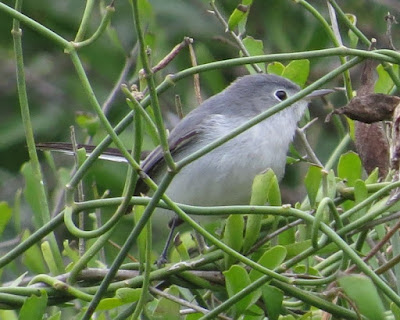 Blue-gray Gnatcatcher at the feeder area 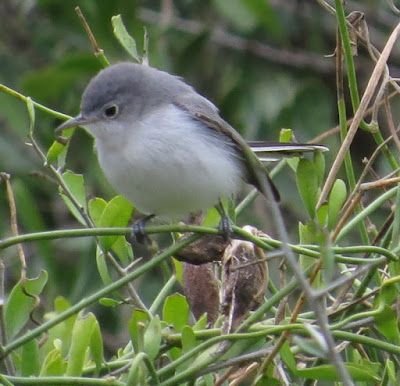 Quinta Mazatlan was next, where a group of Chachalacas met us at the entrance!  We got to the feeder area before the kidlets (there were two busloads of school trips there) where my friend Tamie Bulow and company had just seen the bunting!  (She mentioned that the bird was banded, and later I found out the story from John Brush, the resident naturalist:  they hadn't purposely sought to band the bunting, but while they were doing a banding demonstration the previous weekend, the thing just happened to fly into one of the nets, so he got his own band!)  So we gave it about 15 minutes before the girls were ready to move on, enjoying Green Jays and Kiskadees while an Olive Sparrow serenaded us from behind.  It was quieting down by that point, so there wasn't much birdlife on the trails, but thankfully things picked up back behind the buildings when a mob of Clay-colored Thrushes showed up in the anacua!  After walking the whole of the trails and enjoying the statuary, Laurie suggested going back to the feeders, and this time we didn’t have to wait long before the bunting came in!  So the girls got a taste of "rare bird stakeout"! 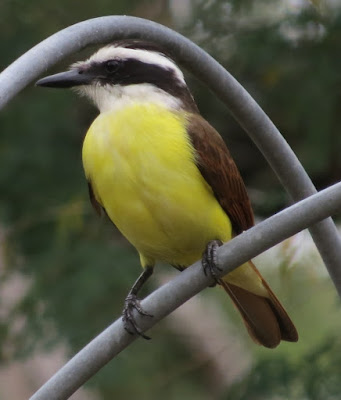 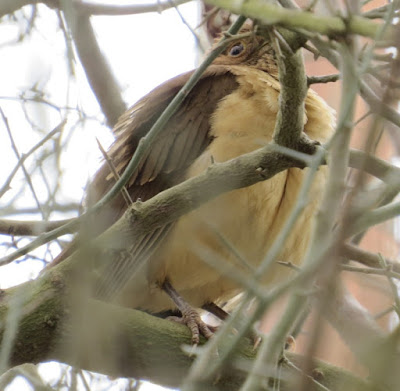 Clay-colored Thrush hiding in the bushes 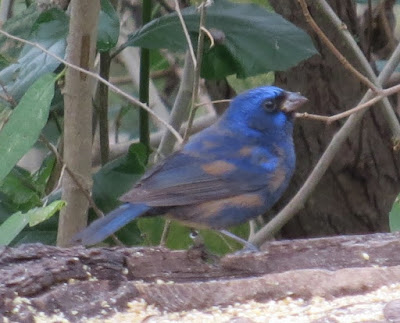 The Blue Bunting now has bling! 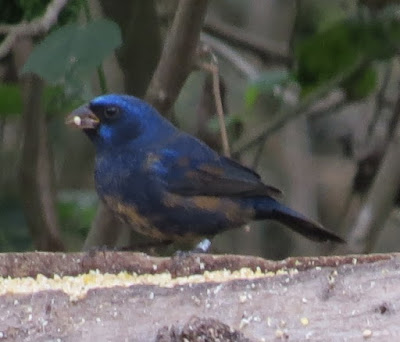 I suggested Wallace Road with what time we had, and we picked up a few things on the paved portion of the road, but I was shocked at how bad the caliche portion was; it was like driving in snow in Michigan!  The girls agreed we should turn back (Subaru or no Subaru, fishtailing down the road was not their idea of fun), so since they were curious about Edinburg Scenic Wetlands, we decided to swing by there seeing as it was on the way, but discovered the parking area roped off!!  Marisa Oliva, the director, rolled by on a golf cart and informed us that they were closed due to the Coastal Expo!!  I was disappointed as we couldn’t even access the ponds on the east side of Dolittle Park, so the mood was dark as we rolled down to Anzalduas… L  Thankfully the birding was better there:  some Western Meadowlarks perched on the wires on the way in, and we glimpsed an American Wigeon in the wetland on the way in (being careful not to stop)!  They were game for the Sprague’s Pipit Poke, so we headed out and flushed one (that was good enough J) and kicked up another on the way to the water’s edge to check out the scaup and coot flock.  We had run into birding buddy Huck Hutchins on the way in, who informed us of the Pine Siskin flock, so we kept an ear out for them as we crawled along the roads; got American Pipits along the road, and Huck also reported lots of House Finches, which we ran into close to the river.  Also got an American Goldfinch, a young male Vermilion Flycatcher, and a tyrannulet calling down the road.  A big Osprey had an even bigger fish, and Laurie spotted an Eastern Bluebird, which is always fun! 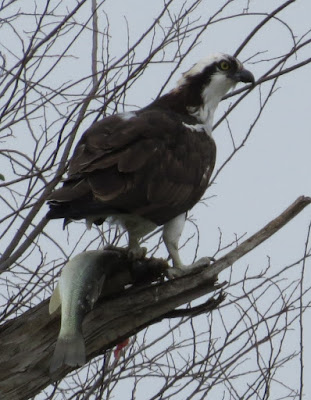 An Osprey catches a fish almost as big as he is! 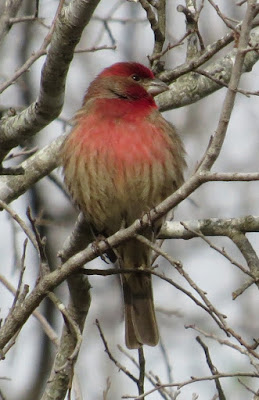 House Finch (considered "rare" in the Valley, but expected at Anzalduas)

Called it a day after that, but despite the hiccups, we wound up with an incredible 91 species!  Bird List: