Had a delightful morning with Cynthia and Boyd from Colorado, visiting the Valley for the first time when most everything was new!  Like many couples I know, they had a “rule” where they couldn’t count a bird unless both had seen it (at the same time; they related the story where individually they saw Sandhill Cranes flying over their house when the other spouse was absent, so it’s not on either’s list L), but Cynthia especially had a love and appreciation for creation that lent an air of excitement to everything we saw!  I had looked at their “wish list”, and since we were only doing a half day I presented several possibilities based on that list, and they chose Estero Llano Grande SP, a great place to spend a morning!


It started off cool, but the rain from the day before had abated (they said they got caught in that at Santa Ana).  One of the best birds was seen along International Blvd. on the way to the park: a mob of Green Parakeets on the wires (in fact, Cynthia spotted them)!  After pulling in the parking area we had a kingbird on the wire that was probably a Tropical, but since it didn’t say anything, I felt it best to leave it unidentified.  We had the same issue at the hummer feeder off the deck: two female Archilochus came in (Ruby-throated would have been new), but she just didn’t show all the field marks to help in narrowing it down to one or the other (and eBird didn’t like putting in more than one Blackchin), so we had to let that one go as well.  But I decided to take them into the main part of the park first this time, then hit the Tropical Zone, as I didn’t seem to be having much success in bagging the Hammond’s Flycatcher and Tropical Parula by hitting it first, so I reasoned that later in the morning maybe there’d be more bugs to catch!  Just before the VC several Inca Doves were feeding on the tray feeder; while most of them exploded into the bush at our approach, a couple brave souls stayed put and allowed great looks! 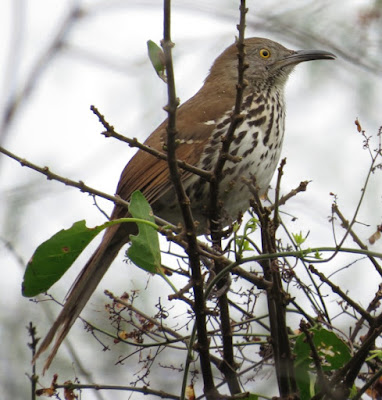 Long-billed Thrasher in the parking lot

Being overcast, we had great looks at the ducks off the deck (including several Cinnamon Teal), and Huck and company looked dutifully for the Common Grackle amongst the mob of Redwings, but he seemed to have disappeared.  The funky Least Grebe was feeding amongst the Mottled Ducks (which were new for my charges – the ducks, that is), and an Eastern Phoebe wagged his tail from a snag.  We hurried on towards Alligator Lake to give the bird walk people some space, picking up a nice male Yellowthroat at the edge of the water.  While the Swamp Sparrow didn’t even peep, I was thrilled to see the Grasshopper Sparrow pop up along with his Lincoln’s friends, who all gave very nice scope views!  Dowitcher Pond actually had a lone Long-billed Dowitcher flying around, and a couple of Snipe exploded from the shore, but the Spotted Sandpiper that’s always on the log there was actually starting to get some spots! 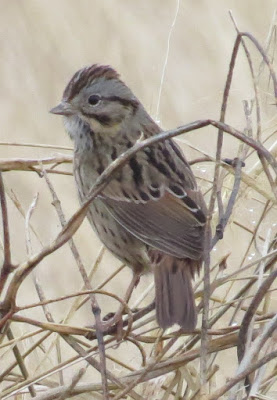 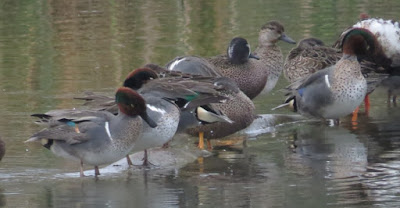 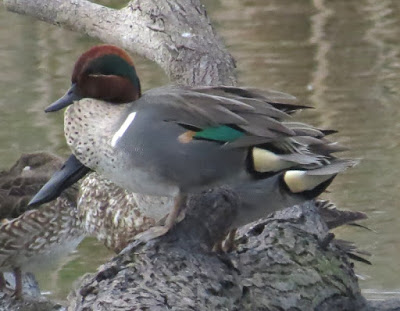 We headed over the bridge; no kingfisher, but several Snowy Egrets had taken his place along the canal!  Grebe Marsh only had a few Shovelers, but as we walked along I stopped them short – Red-crowned Parrots were calling in the distance!  (Which doesn’t help much if you want to actually see the bird…L)  We continued on to Alligator Lake, where six Black-bellied Whistling Ducks flew overhead, and Cynthia and Boyd were appropriately blown away by all the night herons (of both flavors)!  The one fearless Yellowcrown posed for IPhone shots (others weren’t as friendly), and I showed them the difference between the adult and subadult Blackcrowns.  Even a Tricolored Heron showed up.  But suddenly Cynthia spotted the Green Kingfisher across the way (I heard him ticking, but took me a while to find him in the scope)!  Great looks! 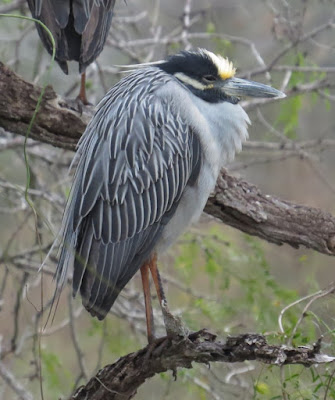 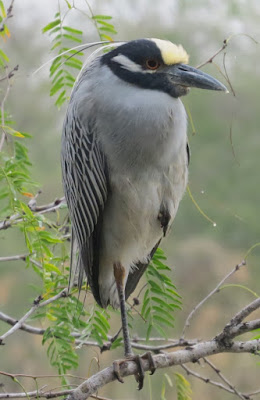 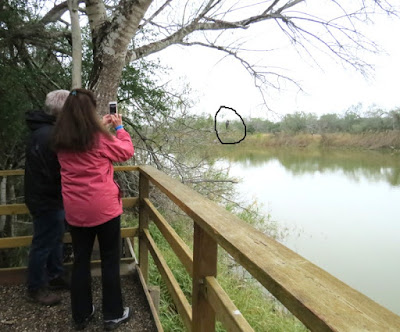 
We then quickly found “Pancake the Pauraque” (I’m not gonna let Allison live that one down J), but the Screech Owl wasn’t in his hole, so we continued to the overlook where the Anhinga pair showed nicely (another new bird).  A Neotropic Cormorant was actively drying his wings, flapping them ever so slightly to hurry up the process, while a Great Egret fed across the way (too cold yet for the Alligators, I guess).  On the way out I heard the Beardless Tyrannulet call, so since the owl was absent I didn’t feel guilty about hoofing it over there and trying to find it, and he actually showed himself (and even more miraculously, both Cynthia and Boyd got on it)!  The bird walk had caught up with us by then, so, not wanting to lose the tyrannulet, I asked if one of them would be willing to tell the group that we had the tyrannulet, so Cynthia went to fetch them, but in the process missed the Wilson’s Warbler that came in! L  (So that was another one Boyd couldn’t count…)  But the tyrannulet perched right overhead, and I’m not even sure any of the group got on it before it took off for the netherlands…  We did all get on an uncharacteristically cooperative White-eyed Vireo, however (and the gnatcatchers were being particularly cute J). 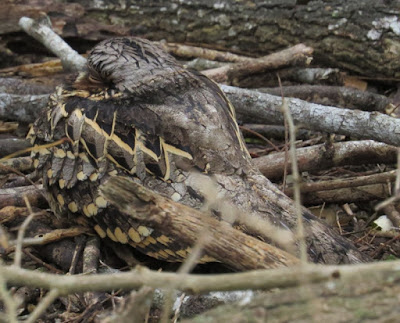 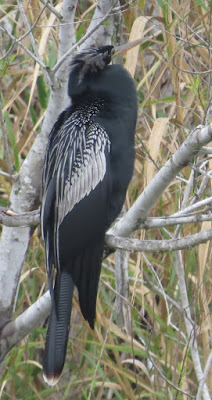 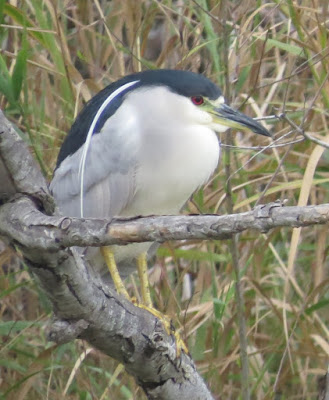 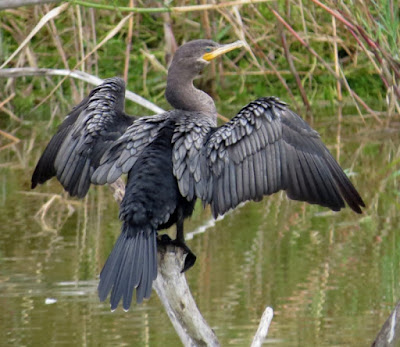 
I had heard a Bewick’s Wren while all that was going on, so seeing as that would have been new, I decided to take them back on the Camino de Aves Trail, before which we picked up a cooperative Common Ground Dove!  We had to loop around quite a bit before tracking the bugger down (and he never did pop up), but what was even better was an Indigo Bunting, also on their “want list” (although not nearly as pretty this time of year)! 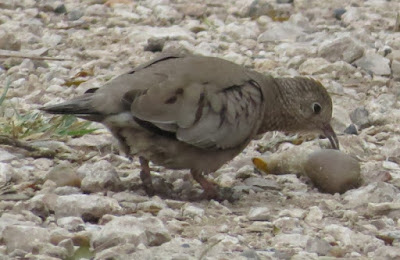 We headed back to the VC and then on to the Tropical Zone after that, greeting park host Rick Snider on the way (being from Colorado, my charges didn’t need the Broad-tailed Hummer, which prompted a story from a passing birder about a friend who would drive for hours just to add what was normally a backyard bird to another county list).  He told us where the flycatcher and parula had been seen (actually, they didn’t need the Hammond’s, either), but both birds again eluded us.  The place was lousy with Clay-colored Thrushes, however (and not surprisingly, with all the anacua berries), and lo and behold the Screech Owl I had been told about that likes to sit on the totem pole was actually there!  They had gotten their life bird the day before, but this one was a better view, they said, and I of course explained to them about the potential split of McCall’s (our Screech Owl) from the nominate race!  Cynthia spotted a thrasher thrashing, which was indeed the Long-billed, but as I circled around to hopefully get them a scope view, I noticed a Curve-billed Thrasher with him in the same binocular view!  They really didn’t need the scope at that point (I also advised them to put our Curvebill in the bank, as they had seen the bird in Arizona, and that might be split down the road as well)!  We sat at the drip for a few minutes, only getting an Orange-crowned Warbler to come in, but a Cooper’s Hawk was calling quite regularly from beyond the old shuffleboard courts, so we weren’t surprised that not much was coming in (except a bold Green Jay)… 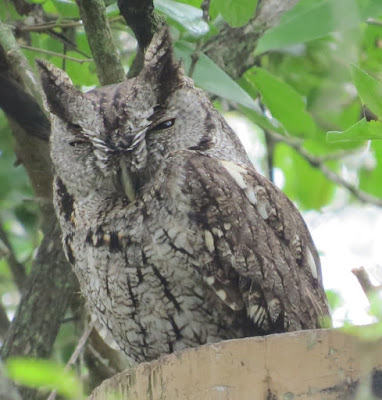 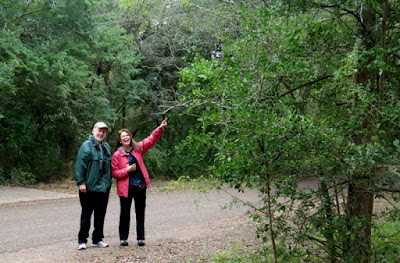 Cynthia points the owl out to a passing birder...

It was time to head back to Alamo after that, but not before running into Rick's wife May and two of our Winter Texan residents at the Inn - Cathy and Bill - who again tried to tempt us with the Broad-tailed Hummer!  We still ended up with a modest 66 species for the morning!  Bird List: