Road Birding and a Rebellious Ride

Since rain was in the forecast, I opted to take Mike on the La Sal del Rey Loop, starting at “South Brushline Road” (the stretch between FM 490 and SR 186).  The fog was pretty thick when we first left Alamo, but once it cleared along FM 493 we had a nice view of a Red-tailed Hawk on a pole (first of many).  After leaving Hargill the sun was out, and we passed a magnificent Peregrine Falcon on a wire (!) that we just had to stop and enjoy!  When we made the turn onto Brushline, there was a cacophony of birds right there on the corner:  several Kiskadees were displaying (kept missing that perfect shot when they puff up their yellow crown), a Long-billed Thrasher actually sat out in the open, and lots of “bitty birds” were around but proving hard to pin down for pictures:  Ruby-crowned Kinglets, Blue-gray Gnatcatchers, titmice, and Orange-crowned Warblers were all in the mix.  Even a Verdin chirped and gave a brief view, but he would prove to be a nemesis bird for Mike throughout the day!  As we crawled along and periodically stopped we had flyovers of both flavors of pipit, managed looks at a Pyrrhuloxia, White-tailed Hawk, and a pair of harriers, and finally three Sandhill Cranes!  The big show, however, was a mob of Caracaras feeding on a dead crane (we were hoping it hadn’t been shot and dumped…)! 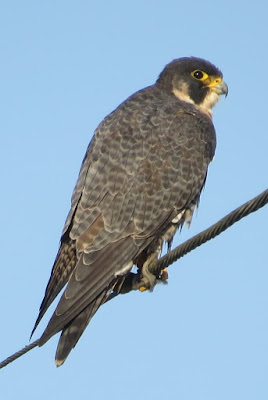 A Peregrine Falcon gives us the evil eye just out of Hargill! 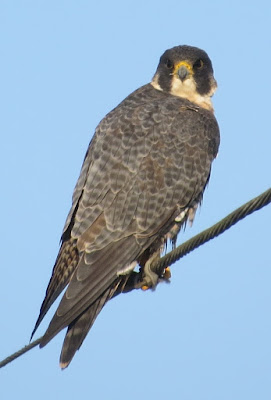 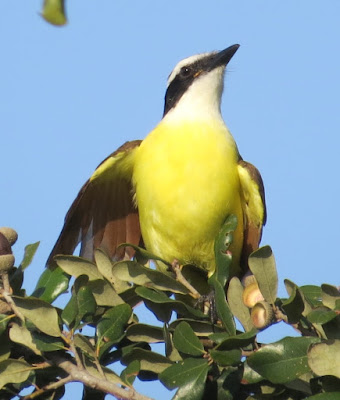 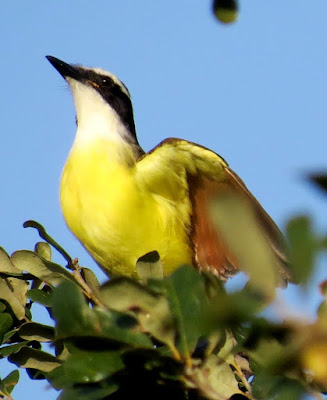 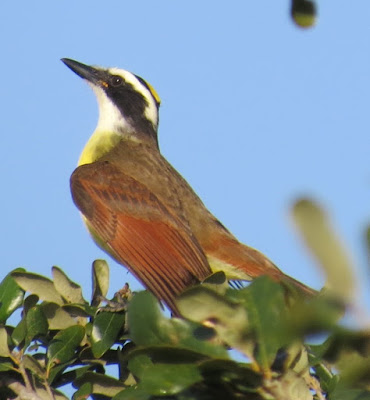 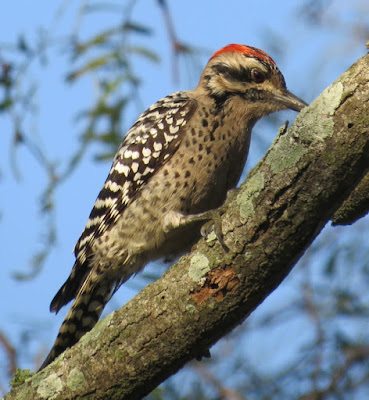 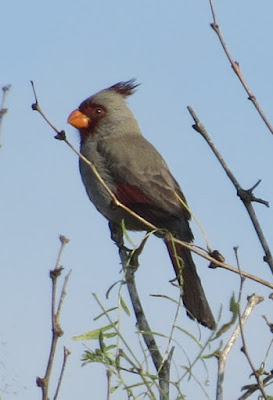 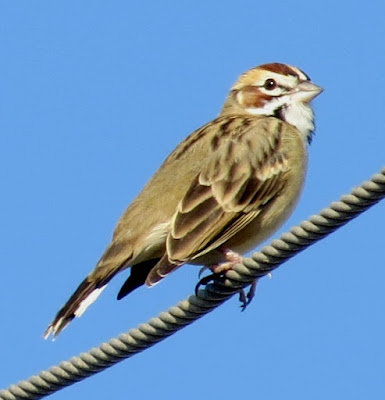 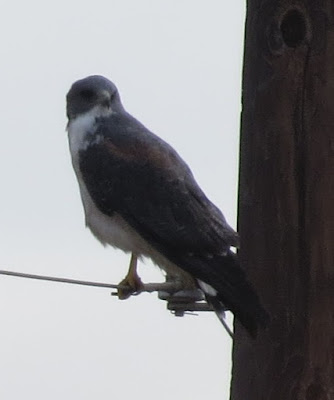 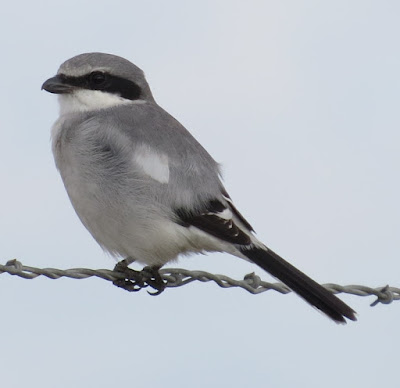 A group of Caracaras chow down on a deceased crane!

Crossing SR 186 we continued on, stopping when we heard feeding flocks or something in particular that Mike wanted to photograph, like Bewick’s Wren, Ruby-crowned Kinglet, or that dratted Verdin! J  We tried for Cactus Wren but none would respond, but at one stop Mike spotted a Cassin’s Sparrow sitting quietly in a bush!  The other home run (also spotted by Mike) was a Lark Bunting right next to the road!  At that point we only saw the one, but on the way back we would flush a flock of about 30 that briefly landed on the wires overhead before taking off again!  In a more heavily wooded area I thought I heard a whit, and sure enough, with a little encouragement a Least Flycatcher popped up!  Near the trail to the lake (Mike preferred letting the car doing the walking, and I confessed that I concurred) a Turkey was clucking in the distance, and a family of Javelina crossed the road ahead of us (with a Roadrunner in the background).  Sadly we found a dead White-tailed Hawk next to the road; it was still pretty fresh, and I didn’t see any evidence that it was shot or otherwise injured, so its demise remained a mystery. 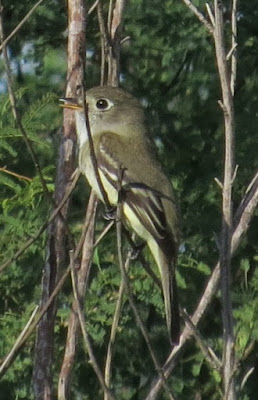 Least Flycatcher; most have migrated through, but a few overwinter 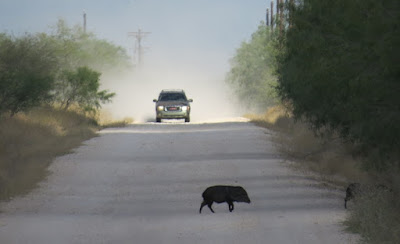 Javelina family getting out of the way... 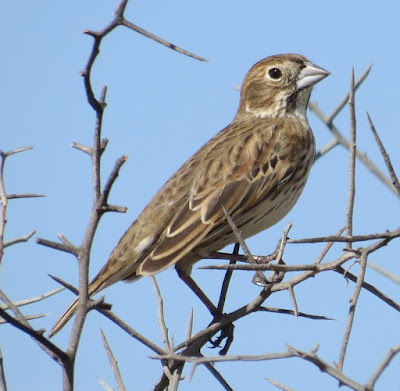 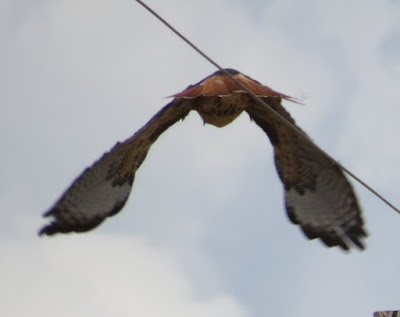 We tried for Cactus Wren again along the east/west portion of Brushline, but instead got more “bitty birds” to respond; a Verdin actually did pop out into the open, but unfortunately Mike’s camera rebelled and the only photo he got was a ball of fuzz…  He did manage decent shots of both the kinglet and the gnatcatcher, so he was pleased (as these birds are constantly on the move and trying to follow them with a heavy lens is a trick)!  A Pyrrhuloxia also kindly posed on a wire right next to the car!  Up at the pond we padded the list with a few ducks and shorebirds (Avocet and Green-winged Teal were nice), and on the way back we had a “role reversal” of the two male Vermilions that were dogfighting at Santa Ana:  here we had two presumed females chasing each other!  They seemed oblivious to the shrike they kept leapfrogging with, and while all this was going on a Curve-billed Thrasher danced for us in front of the car… 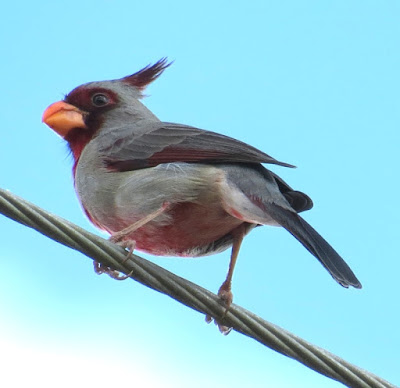 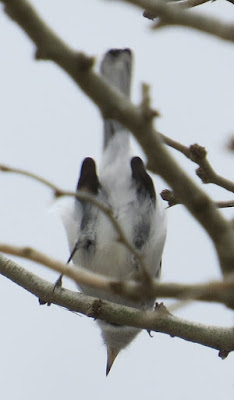 Various poses of a Blue-gray Gnatcatcher moving through the trees... 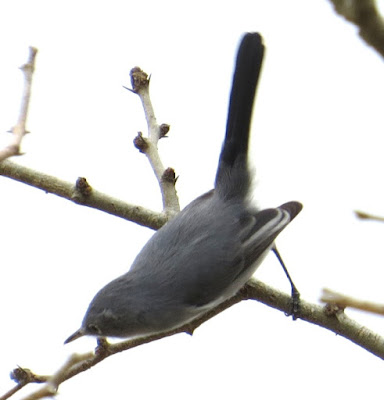 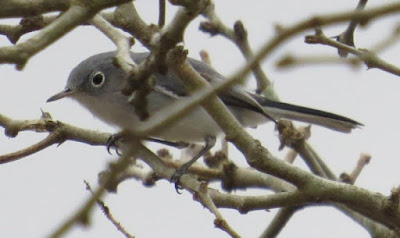 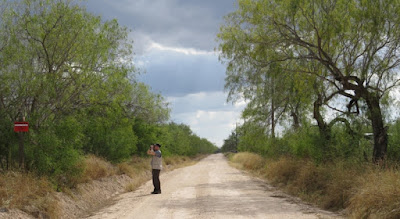 Mike checks out the farm pond along North Brushline while the threatened storms come our way... 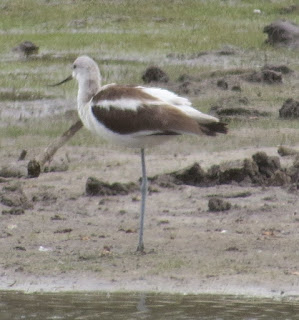 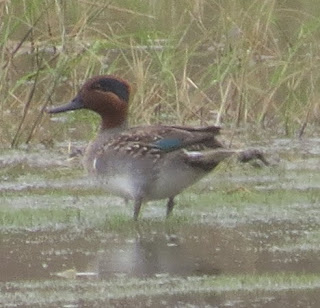 We made the turn onto Ken Baker and resumed crawling, along which the threatened rain began (we had tremendous views of the cells all round us; Mike was afraid I was going to switch to storm-chasing mode any minute J); interestingly we ran into another flock of Lark Buntings, and after finally talking Mike into at least driving to the Rio Beef Feedyard gate, we were rewarded with a Say’s Phoebe flopping around the tractors, and despite the dripping rain, they had a sprinkler going in front of the office that was attracting hundreds of Brewer’s Blackbirds!  So he was happy after all that we were rewarded with two new birds for him (and write-up ones at that)!

A mob of Brewer's Blackbirds feeds outside the Rio Beef Feedyard office! 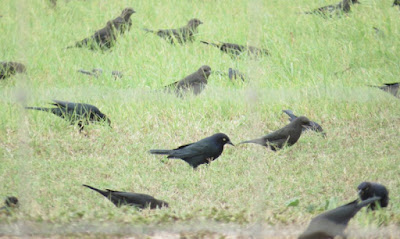 Males are black with yellow eyes, much like miniature grackles... 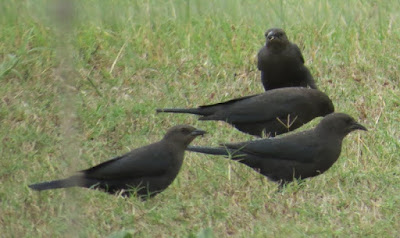 ...while females are dark brown with black eyes. 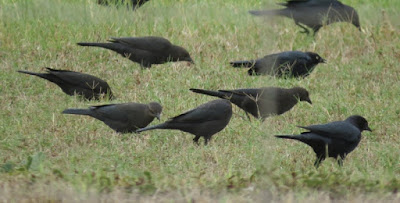 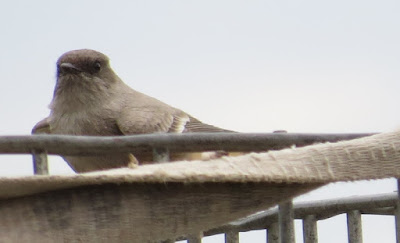 Say's Phoebe is considered a rare visitor from the west, but one or two show up most every winter. 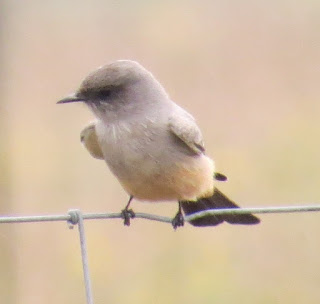 No cranes or geese were in the “barren field”, and since it was raining I opted to go down Rio Beef Road with its solid caliche and good roadside habitat (but not before sighting an Indigo Snake making haste across the road, unfortunately too fast for Mike’s camera).  Some Yellowthroats were calling in the marsh, but since it was still spitting we didn’t get out to investigate.  Just before we hit SR 186, however, a nice Krider’s Hawk was sitting on a pole along the highway! 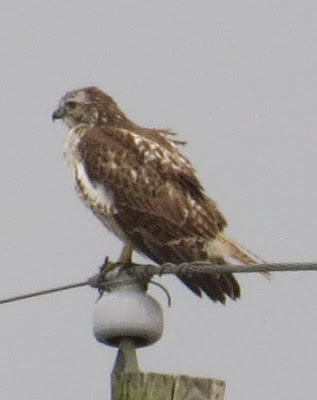 Presumed young "Krider's" Hawk, although some young "Eastern" Redtails can be pretty pale as well...

With what time we had left we opted to stop at the “1015 Pond”, seeing as we’ve had flyover geese and cranes in the past; on the way we spotted a rather bedraggled White-tailed Kite!  At the pond we had a nice selection of shorebirds and ducks, but nothing unusual (added a ffting Marsh Wren for the day).  Just as we were getting ready to head home I heard geese in the distance, and sure enough, a flock of Snows looked like they were coming right at us, then suddenly wheeled around and headed the other direction!


Unfortunately Heppy had decided he had had enough and refused to start (exactly what happened on the Boca Chica Adventure), but this time AAA came to the rescue, determined he had a bad battery, and got us going so we could head home!  The delay enabled us to be treated to a spectacular sunset, however, and we almost broke 70 species for the day!  Bird list (those in italics were heard-only):