Todd from Pennsylvania was game to go chase the Green-breasted Mango (even though he had already seen it in Costa Rica), so away we went!  We were amused by the fact that Quinta Mazatlan had a “sandwich sign” set out with one arrow pointing toward the mango, and the other pointing towards where the mimic white had been found!  The crowd was even bigger than when Heather and crew came, and it sounded as though there was at least one other guided bird tour there (someone quipped that he didn’t appreciate the Inca Doves saying, “No hope!” J)!  While we waited we poked around the greenery while still within earshot, and picked up Kiskadee, Vermilion Flycatcher (a life bird for Todd), and a pair of Tropical Kingbirds!  We moseyed back to the crowd and before long the place exploded with cries of, “There he is!”  Sheri Williamson (the Hummingbird Lady from Arizona) got a bunch of us on him (he could only be seen through a little window of the hackberry tree), and after a few pictures, he was gone!  There were a lot of happy campers after that, but unfortunately a few latecomers (including my boss Keith) just missed it! L  Thankfully I got word from him later that the bird showed again briefly, so that was a relief! J 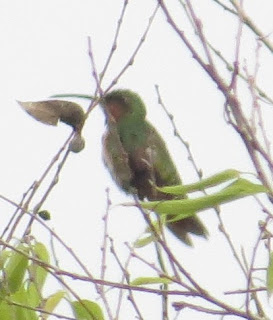 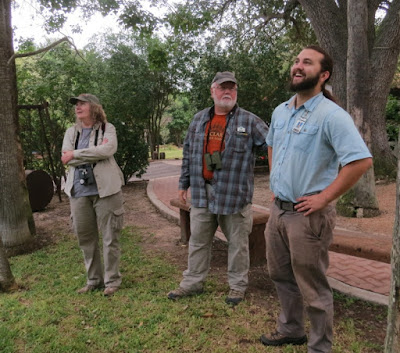 Todd (left) and Keith (who seems pretty happy despite just having missed the bird...)


In the meantime Todd and I made the trail loop, which was very productive:  right away we got great looks at Chachalacas, a Clay-colored Thrush at one of the water features, and a Long-billed Thrasher that photo-bombed my video of the thrush!  We ran across a few feeding flocks that included mostly Orange-crowned Warblers, one Black-throated Green, and a Blue-headed Vireo, and Todd was thrown by the Starlings whistling that sounded so different from his back in Pennsylvania!  A lady Ladder-backed Woodpecker posed overhead, while Olive Sparrows were all around us but refused to show…  We decided to sit at the feeders for awhile where the Kiskadees, Green Jays, Golden-fronted Woodpeckers, and White-winged Doves were more than cooperative! 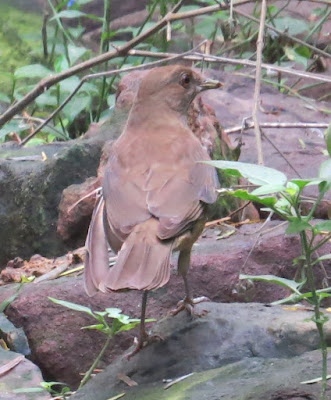 Clay-colored Thrush with a funky wing 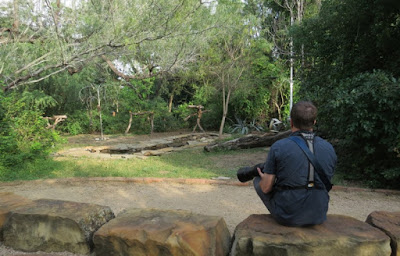 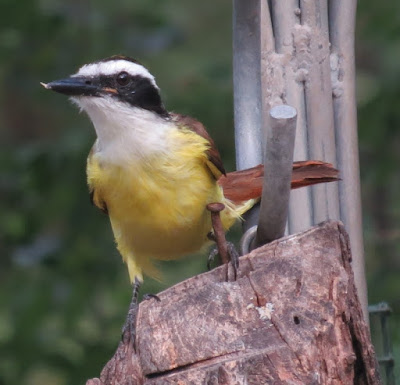 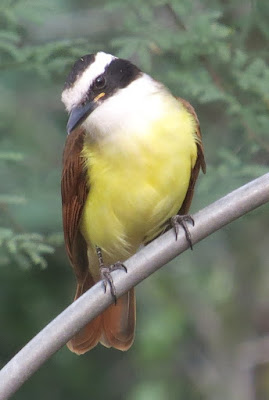 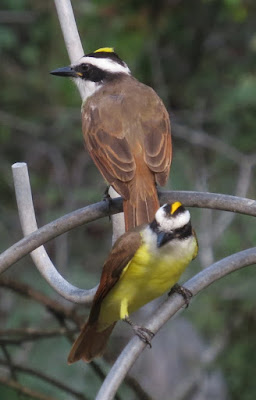 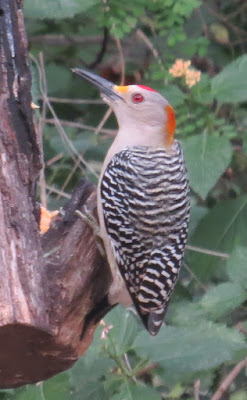 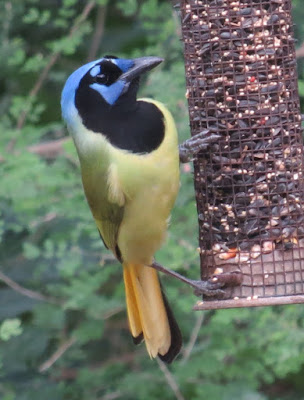 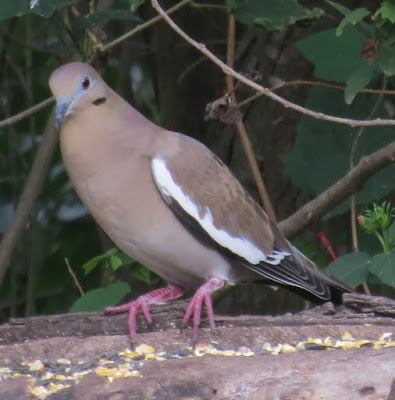 
Finally tearing ourselves away from there we headed to Anzalduas, making a brief stop at Granjeño where Todd was actually able to spot one of the Burrowing Owls after much diligent searching amongst the rocks!  The same little gang of Least and Pied-billed Grebes, Coots, and the female scaup were still in the little wetland along the spillway, but we got “spanked” by the Constable, however, as “No Parking” along there apparently also means “No Stopping For Birds!”  So we entered the park with our tails between our legs, but at least Todd got his Least Grebe! J 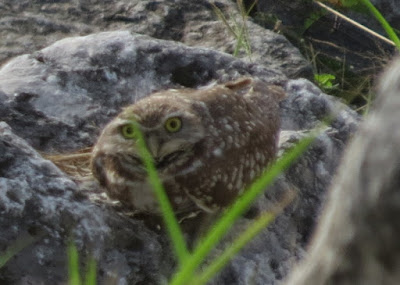 The hike across the Sprague’s Pipit field was productive (although none stood still for us, Todd at least got a great “wingless torpedo” shot of one that clearly showed the plain face); one poor lady was wandering around trying to flush one but didn’t know the flight call, so we cottoned her onto that…  The raft of scaups and coots was still in the river, along with a Snowy and Cattle Egret keeping each other company on a log!  A nice Osprey and Great Blue Heron were across the way as well, but no Ringed Kingfisher this time… L 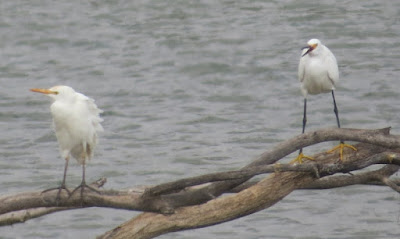 We made the circle without picking up much else (except a nice Merlin and a flock of Western Meadowlarks), so headed straight to Estero Llano Grande after a convenience store stop.  That proved very productive, as we checked out the deck first and picked up Todd’s life Cinnamon Teal from the mob of other ducks!  On the way to Alligator Lake a Snipe flushed next to us, and the Spotted Sandpiper was back on his log at Dowitcher Pond! J  The Green Kingfisher that likes to hang out along the canal near the little footbridge put on a great show, and a little Common Ground Dove posed along the canal as well!  Several Least Sandpipers were poking around Grebe Marsh, along with a White-faced Ibis that a lady asked us about (she was concerned it might be a Glossy, but immatures are virtually identical…).  Down at the turnoff to the Pauraque spot the Yellow-crowned Night Herons had returned in force, and the namesake Alligator was sprawled on the bank!  A flock of Yellow-rumped Warblers (aka Butterbutts) flew over, and Todd spotted an Anhinga hiding in the foliage.  We approached the barrier, and I breathed a great sigh of relief when I spotted the Pauraque (which appropriately wowed Todd), but the Screech Owl was a no-show.  A Soft-shelled Turtle sliding across the trail was a nice consolation prize, however! 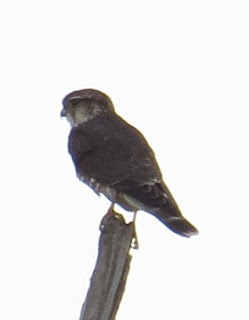 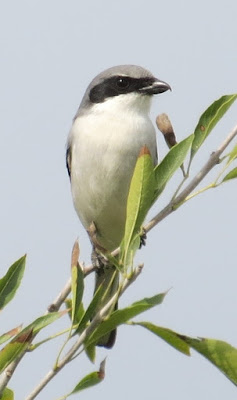 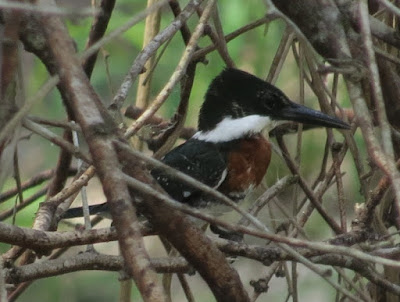 Green Kingfisher hides in the sticks... 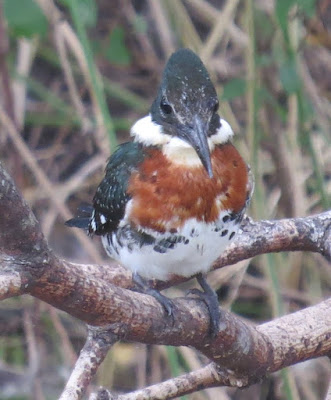 ...then comes out in the open! 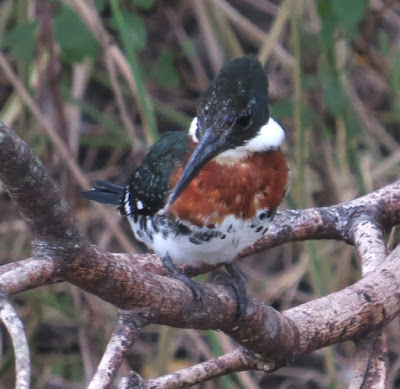 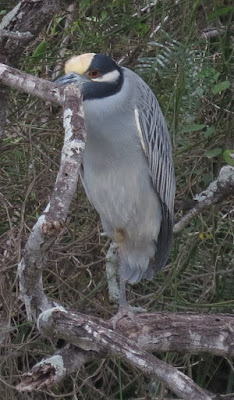 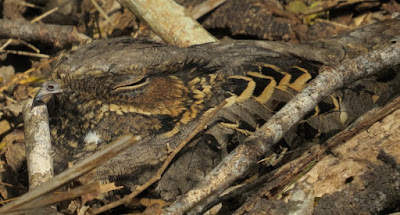 We headed to the Tropical Zone by way of the Wader’s Trail, where Todd was finally able to get a decent shot of a Vermilion Flycatcher!  I heard an Avocet yelling from the levee area, but the trail produced no sparrows, and the wetlands near the gazebo produced no American Bittern that had been reported there. L  So we headed on into the Zone and pretty much went straight to the Drip, where after 15 minutes things really started hopping!  Both Orange-crowned and Nashville Warblers came down to take a bath (and you could even see the orange crown!), and titmice came in to investigate.  Even a White-eyed Vireo finally showed himself, and the White-tipped Dove came prancing through!  But the star of the show only deigned to let Todd get a look:  the Tropical Parula!  A sapsucker also called, but he was almost anticlimactic!  During all this an Altamira Oriole and Beardless Tyrannulet called, but we couldn’t pin them down; we did, however, get less-than-stellar looks at a Buff-bellied Hummingbird that was guarding a giant Turk’s Cap bush on one of the roads!

Todd shoots a Vermilion Flycatcher (below) from the boardwalk 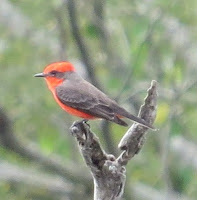 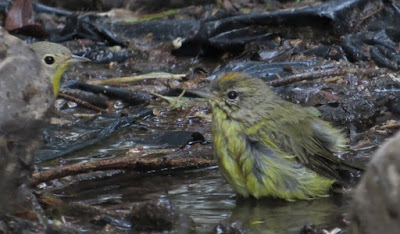 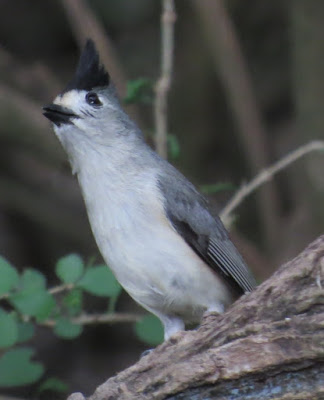 After sitting fruitlessly at the VC hummer feeders (and adding Tree Swallow to the day list) we decided to hit the Progresso Silos.  My plan was to go in via the road off US281 so that the Yellow-headed Blackbirds would be on Todd’s side of the car when we made the turn, but that plan backfired as they were on my side of the car this time, along with about five Bronzed Cowbirds!  We enjoyed watching the carpet of blackbirds across the road life off every time a vehicle went past!

Carpet of blackbirds at the Progresso Silos 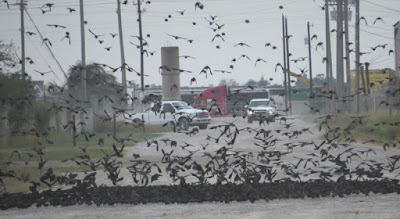 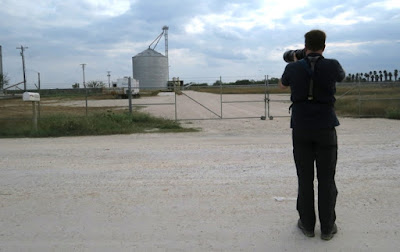 With what little time we had left I decided to take a cruise up Border Road for another crack at Sprague’s Pipit and Burrowing Owl, but they weren’t to be found (we did pick up Black-crowned Night Heron for the trip at that private lake, so it wasn’t a total loss), so we headed on home with an impressive 92 species for the day!  Bird list: