Heather, Rob, Roger, and Ruth had been birding on their own for the good part of a week, and arranged a “clean-up” day with me towards the end of their stay.  Rob (Heather’s hubby) opted to stay home, so the four of us piled in their rented Hyundai and headed out!  Heather had a handful of targets, and Roger (Ruth’s hubby) wanted another crack at photos of some of the birds they had seen earlier (she and Roger were the “hard cores” by her own admission; Ruth played the role of chauffeur J), so it looked like a good chunk could be taken care of by visiting Bentsen SP, Anzalduas, the Progresso Silos, and then a revisit to Estero Llano Grande.  On the way to Bentsen, however, was a lovely surprise:  at least 200 Green Parakeets all lined up on the wires along Business 83!


Once at Bentsen, we hadn’t gotten far when I heard a Long-billed Thrasher singing, and a nice gentleman who was beginning his exercise walk showed us right where he was!  The canal gave us Black Phoebe, and although not a target bird, he was still cute and put on a good show!  The Gatehouse Feeders were quiet (breakfast hadn’t been served yet J), so we continued on down to the Resaca, trying fruitlessly to pish up Olive Sparrows, a Hermit Thrush, Lincoln’s Sparrows, and a stubborn Beardless Tyrannulet along the way.  However, a Clay-colored Thrush did his ringing call and then was very cooperative, posing on an open branch for a long time! 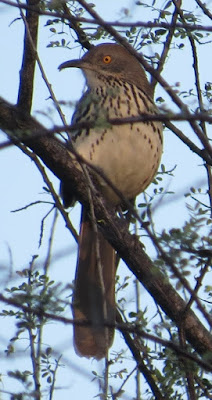 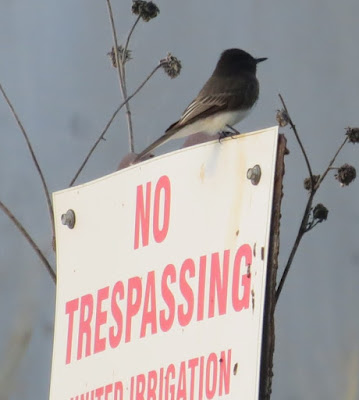 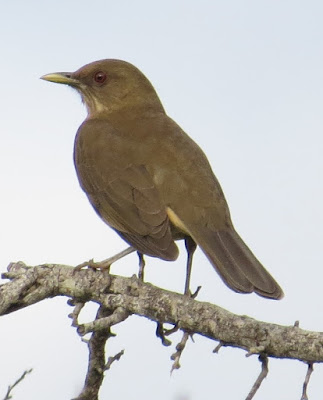 Another couple told us exactly where to look for the vagrant Red-naped Sapsucker, so after we got to the road to the boat ramp we circled the big trees near the entrance, where a lady Ladder-backed Woodpecker had us going for a minute.  My three charges wandered closer to the overlook while I continued scouring the mesquites, when suddenly they said they had it!  The bird immediately flew back into one of his “original” trees and continued to bounce around, but giving great looks (and, I think, pictures for Roger – I got a “proof shot” J)! 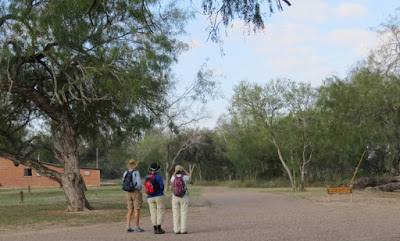 The gang finds the vagrant Red-naped Sapsucker (below)! 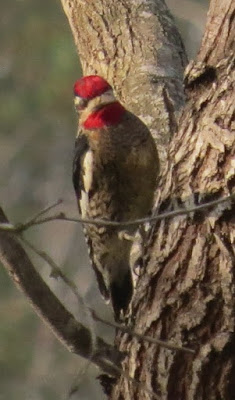 He really does have a beak...

From there we went to check out the Resaca for about 15 minutes to see if a Ringed Kingfisher would happen by; it was actually quite birdy, with White Pelicans and egrets to the south, a Great Blue Heron to the north, a Spotted Sandpiper on a log, and a female Anhinga hidden in the branches quite close to us!  The “Wall Feeders” were quite active with lots of Kiskadees and Red-winged Blackbirds, and one White-winged Dove for the day.  My friend Pat showed up about then, so we showed her where to look for the sapsucker (which she got pretty quickly – needed it for her Hidalgo County list J), then saw a very pale-breasted Red-tailed Hawk sitting on a post that she wondered if it was a Fuertes’.  From my angle it was a side view, so I really couldn’t tell, so we left it at just plain ol’ Redtail for the eBird list… 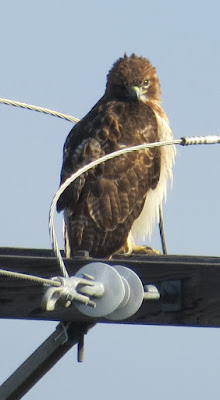 A possible "Fuertes'" Red-tailed Hawk checks us out

About that time we got the alert that a Green-breasted Mango had been discovered at Quinta Mazatlan!  So after checking in (we had gotten there before the office opened) we headed over, and the staff was already directing people to the “Bat Lawn” where the bird had been hanging out!  Staff Naturalist John Brush had found the thing on the top of a Hackberry tree, but alas he was gone by the time we got there (the mango, not John).  John actually got busy putting out some feeders in the hopes the bird would be attracted to them and hence easier for folks to see (while a vagrant in Texas, this was the dominant hummingbird at the feeders at Rancho Naturalista in Costa Rica), while the rest of us caught up – a rarity brings birders out of the woodwork, so it’s a great time to rekindle old friendships while waiting for the thing to show up! J We agreed to give it a half hour, during which a nice Black-throated Green Warbler showed up, which was a state bird for Heather!  A pair of Red-shouldered Hawks were yelling at each other, then one of them flew in and perched on an open branch, giving everyone great views!  When “time was up” we decided to head on and seek other quarry; on the way out some Inca Doves posed right over their interpretive sign! J  News would come later that the mango never did show up again, but it was on the way to another site that we got the news that a rare butterfly had shown up as well:  a Tiger Mimic White! 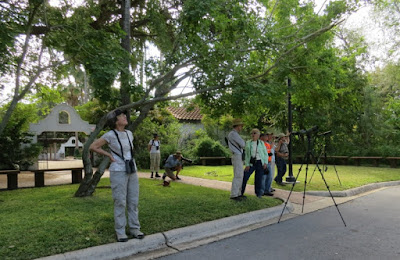 Various birders wait for the Green-breasted Mango to show while Roger shoots a butterfly in the grass! 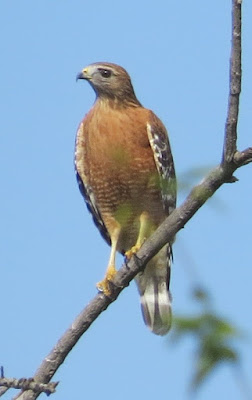 
From there we headed over to Anzalduas County Park, where Heather spotted both Least and Pied-billed Grebes in the little channel going in!  We parked to do the Sprague Pipit March, and on the way across the field (when the guys weren’t distracted by the Little Yellows and single Orange Sulphur bouncing around in the grass J) we spotted another target flycatching from a post:  a female Vermilion Flycatcher (although Roger was hoping for a male)!  A shrike was also singing during all this, and several Western Meadowlarks poked their heads up and wobbled along.  A couple of American Pipits flew over, giving their “pip-it” call notes, and we took a quick look at the mob of coots and scaup in the river before circling around.  Just as I started towards the car Heather stopped me short saying, “There’s a bird in the grass!”  I couldn’t believe it:  there was the Sprague’s Pipit right in front of us – albeit not in the best light, but at least he was standing still!!  Everyone got a scope look, and we tried to circle around him to get better lighting, but that little stinker snuck away from us and took off way down the field! 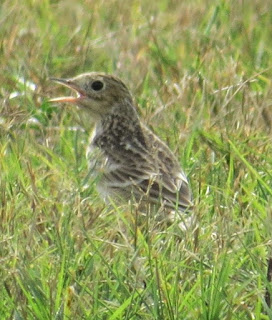 From there we started the crawling, and as we approached the first corner by the river where I like to park, a Ringed Kingfisher suddenly started its machine-gun rattle!  We parked and jumped out, and found the bird in some vegetation hidden close to shore, but then she flew over to the little “island” where we discovered she had a big fish in her beak, but just sat there with it, watching us!  Before long a Green Kingfisher settled in below her, but we all thought that was interesting that she just hung onto that fish instead of tenderizing it and eating it!  In the meantime Heather and Roger had found some feral Muscovy Ducks, so since eBird wants you to track them as well, I made a special effort to find them myself… 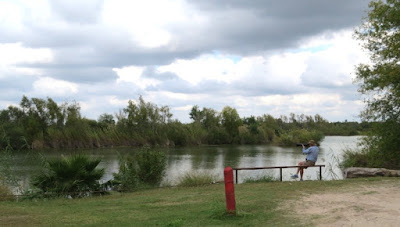 Roger finds a comfortable place to shoot a female Ringed Kingfisher (below) who seemed determine to hang onto her fish! 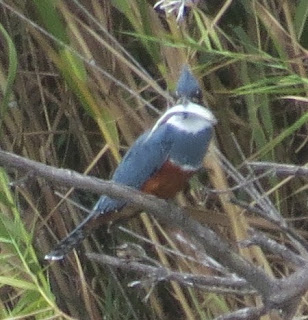 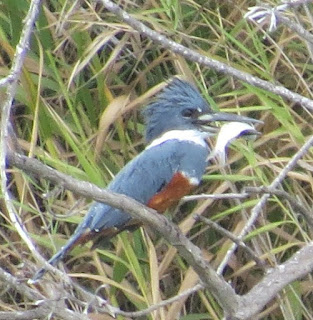 As we made the circle, we finally did find a nice male Vermilion Flycatcher that Roger could shoot, and when I saw him and Heather abandon the flycatcher to go chase something else (I was keeping Ruth company in the car), I caught up with them to discover they had found a nice little feeding flock that included American Goldfinches and Yellow-rumped and Yellow-throated Warblers!  We had also found some Eastern Bluebirds, but they fled the joint quickly…  I heard a Gray Hawk, and then we saw a small raptor making haste towards the dam area, but didn’t get a good enough look to tell if that was him or not…  On the way out both Heather and Roger wanted to stalk the grebes on the spillway, so the three of us did that while Ruth followed us in the car like a mobster’s bodyguard, and in addition to the grebes we had nice looks at a pair of Mottled Ducks and a female Lesser Scaup! [Update:  found out later that the officials do NOT want you walking along the spillway, so we were unintentional bad kids... L] 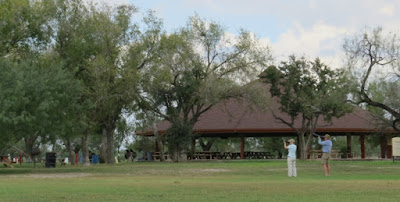 Heather and Roger check the trees for dickey birds... 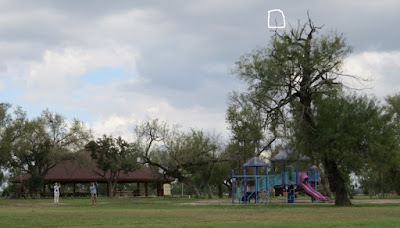 ...and find a young male Vermilion Flycatcher (below; circled above)! 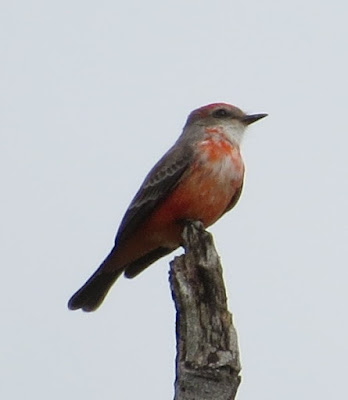 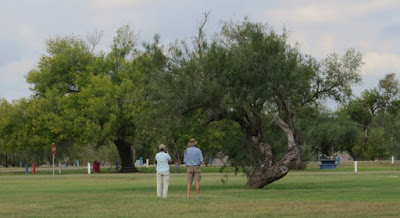 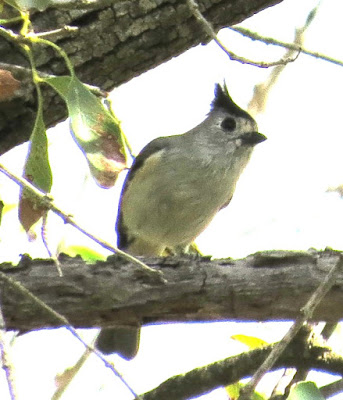 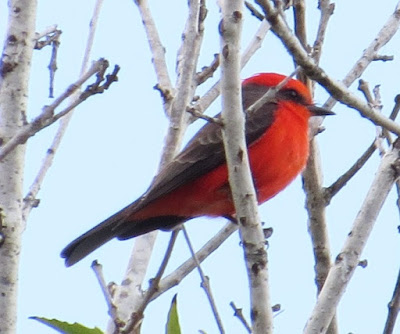 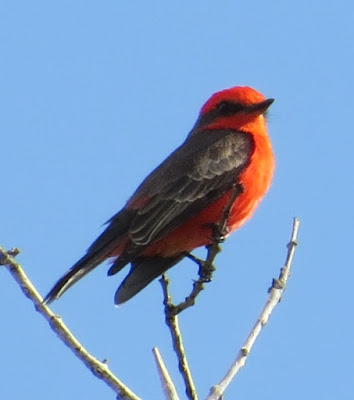 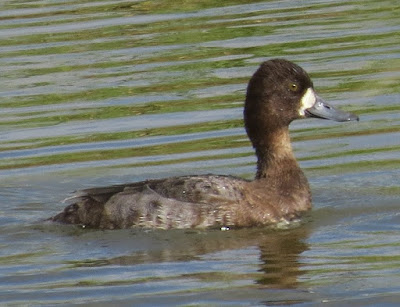 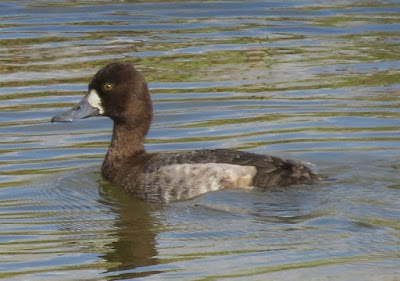 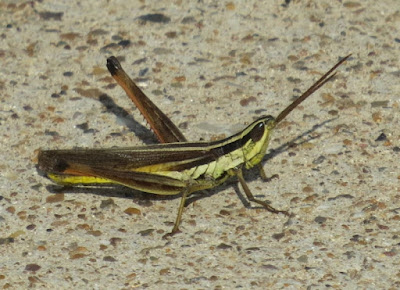 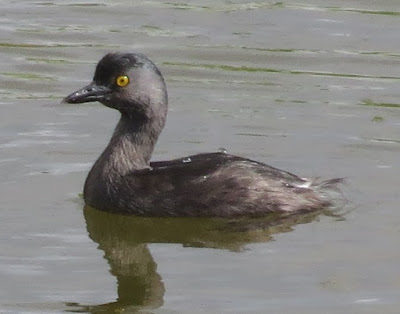 Ruth was tuckered out by then (and I needed to retrieve my phone charger), so we dropped her off at the Inn and Heather became the new chauffeur!  We headed over to the Progresso Silos as she wanted to see a Bronzed Cowbird, and were rewarded with a huge “bird-nado” of mostly Red-winged Blackbirds, but also hundreds of Brown-headed Cowbirds, and the real treat, several Yellow-headed Blackbirds!  Heather was able to pick out a female Bronzed Cowbird in the mix, but I kept hearing one singing from my side but couldn’t spot him; Heather finally did, and he was a beauty!  We were amused at how the mob would gather in the shady spots, making a “square of blackbirds”, and doing a little scanning revealed a Merlin up on one of the guy wires!  Another Red-tailed Hawk with a rather pale face posed on another post, but I wasn’t quite ready to call him a Krider’s…  A nice White-tailed Hawk circled ahead of us on the way out. 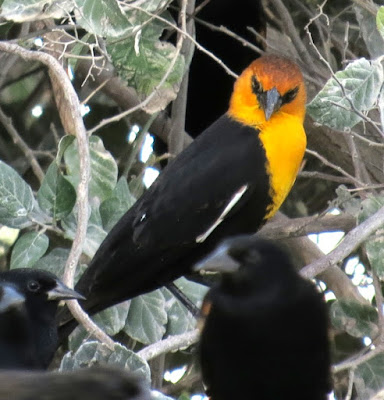 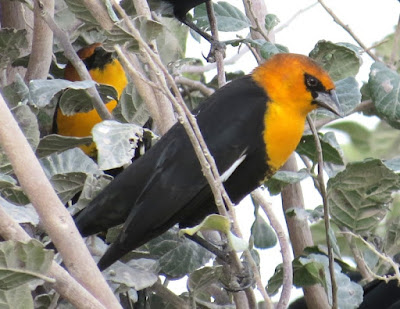 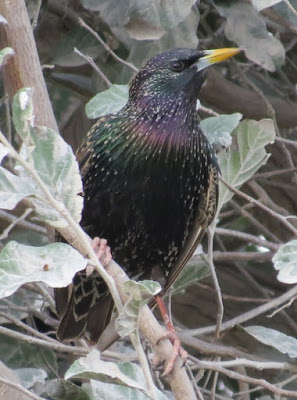 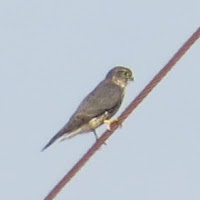 Distant Merlin on the guy wire 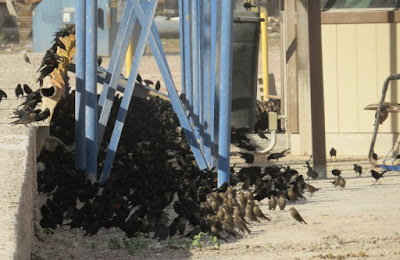 "Blackbird carpet" staying out of the sun 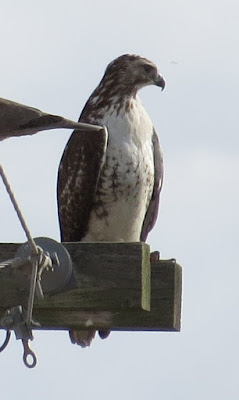 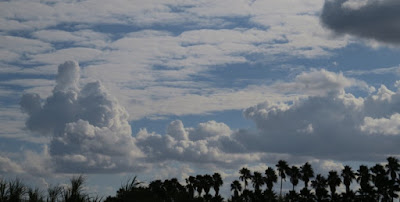 With what little time we had we decided to head to Estero, where we sent Roger to the hummer feeders while Heather and I beelined for the Tropical Zone Drip in hopes of the Tropical Parula!  We did have Tropical Kingbirds on the way that obligingly twittered!  By the time we got there it was actually time to head back already L, but we gave it five minutes and logged the Wilson’s Warbler at least, plus a mob of Black-bellied Whistling Ducks that were wheezing way in the distance!  Roger dutifully met us, revealing that instead of waiting it out at the feeders he had hoofed it all the way to Grebe Marsh and back!  That was a feat!