The Guys from Seattle


After seeing the wives safely off on Sunday, the guys had agreed to let me take them down Old Port Isabel Road (OPIR), as I convinced them that their low-slung rental was no match for that rutted dirt road!  I was pleased to hear that in the meantime, they had nailed Clay-colored Thrush at Santa Ana, and had even braved the three-hour drive to Choke Canyon SP where they bagged the juvenile Jacana, and picked up their coveted Fulvous Whistling Ducks to boot!  Today’s targets included Aplomado Falcon, American Oystercatcher, Black Skimmer, Least Bittern, and Red-crowned Parrot.


Temps were pleasant, but the wind was horrendous ahead of the advancing cold front (that had spawned massive tornadoes in the Panhandle, I found out later), and when we arrived at OPIR, I was aghast that we were being passed by numerous tractors, utility trucks, and big rigs!!  The most traffic I had ever had on that road was the occasional pickup!  At the railroad tracks what I thought were distant White Pelicans at first were actually Wood Storks, and a young Reddish Egret posed for pictures (a little more inland than normal, but at least not as inland as the Anzalduas bird)!  Before long we discovered the reason for all the vehicular activity:  apparently a big rig had been deployed to work on one of the high electrical towers, and had gotten bogged down in the muck! 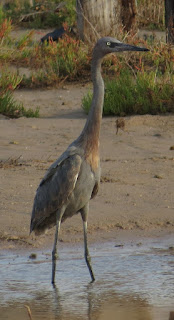 Young Reddish Egret along Old Port Isabel Road
Once we got past the workers, we picked up a few expected open country birds despite the wind, including Eastern Meadowlark, Long-billed Curlews, and Caracara.  The seasonal wetland was stuffed with birds:  mostly Coots but also Ruddy Ducks, Blue-winged Teal, and both species of grebe.  But at the three-mile mark we hit the jackpot:  in the distance we spotted a medium-sized falcon flying up and down and all around, giving great views of his black belly band – Aplomado!!  He was shortly joined by a second bird, and the guys were delighted with how they were interacting with each other!

Rather than risk running into worse conditions than we had (“Diggory,” my Subaru Outback, had already gone “swimming” twice along the road), we turned around at that point, picking up a very cooperative Scissor-tailed Flycatcher on the way out, and headed over to the Highway 48 Boat Ramp to try for the oystercatcher.  We dipped on that, but saw lots of another target bird, the Black Skimmer, resting and flying around!  Brody carefully scrutinized every bird and added several shorebirds and larids to the day list, including a couple of Gull-billed Terns. 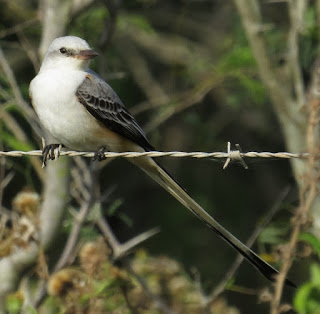 Scissor-tailed Flycatcher
Next stop was South Padre Island, and Ernest especially was struck with all the high-rises!  We headed first over to the bayside access just north of the Convention Centre, where the tide was out and the shorebirding was fabulous!  (The Germans came on the wrong weekend; see the very first blog… J)  Right away we got killer looks at many Piping Plovers, including one with several color bands and a flag!  We drove right up to Western Sandpipers, Dunlin, Sanderlings, Ruddy Turnstones, and even a single Snowy Plover for comparison!  The “big flock” included both flavors of pelicans, five species of tern (including Common, which is actually uncommon this time of year), more skimmers, and all three expected gulls.  But the highlight was a huge immature Magnificent Frigatebird that came sailing over low; we all agreed that he almost upstaged the Aplomado! J 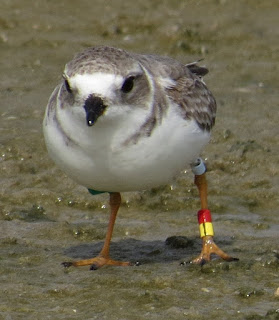 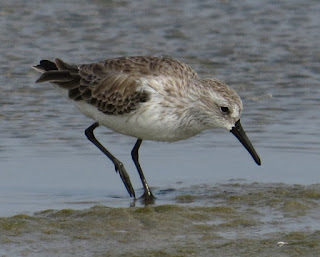 Just a small portion of the "big flock" 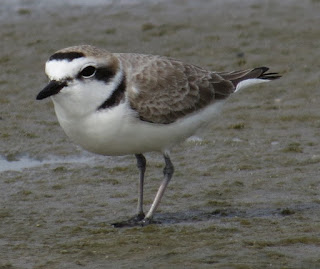 Both Brown and White Pelicans 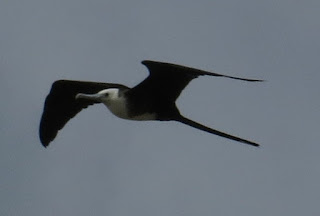 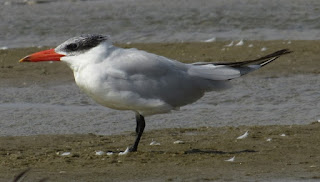 Common Tern (rather uncommon this time of year)

A recreationer stirs things up...

Next we headed to the Birding Center (they have the best restrooms J), as I often get an oystercatcher in the back area.  No go this time, but Ernest did spot a Northern Parula near the new water feature!  We decided to work the boardwalks for their Least Bittern, and on the way to Blind #5 (where they had been spotted recently), we spotted the same Alligator as the Germans enjoyed (hadn’t moved), and lots of Mottled Ducks, Common Gallinules, and calling Clapper Rails.  The distant mudflats had two Marbled Godwits, and the guys enjoyed close views of feeding Tricolored and Little Blue Herons; on the way out to one of the bay overlooks a white morph Reddish Egret stood on the railing just inches away!  The pond that can be viewed from both sets of boardwalks (the Convention Centre’s and the Birding Center’s) had a big flock of Redheads, along with some American Wigeon, Pintail, and a couple of Roseate Spoonbills! Ernest got a glimpse of a Least Bittern as it flew from one patch of reeds to the other, but Brody was the one who really needed it for his life list, so we spent some time hanging around that area.  In the meantime we had both Peregrine and Merlin zoom past, making it a four-falcon day (along with numerous Kestrels along the way)!  The guys got their prepared lunches and went back to keep watch while I took care of some business, and on the way back in to the center a strange teep drew my attention to a young Pyrrhuloxia in the little tree next to the sidewalk!  There were some serious rain cells coming our way, so I wanted to warn the guys, but thankfully Brody had finally seen his bittern! J  So we headed back to the center, but not before Ernest spotted mama Alligator and several babies on her back!  That was amazing! 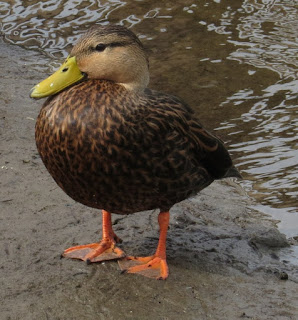 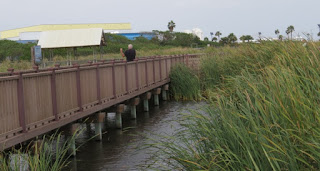 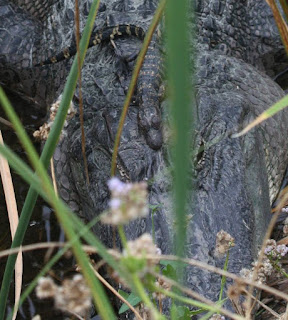 Look hard for the baby Alligator on momma's head! 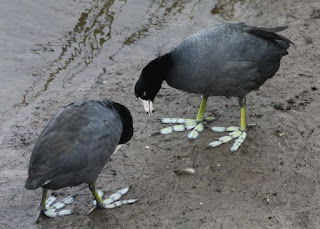 Coots greeting each other

We made one last attempt for the “out back” oystercatcher, adding a Catbird and some Indigo Buntings instead.  A quick look at the mudflats near the KOA campground yielded nothing, so we decided to give the Hwy 48 Boat Ramp one last try before heading to Brownsville.  Still no oystercatcher, but just before we were ready to call it quits, a Franklin’s Gull flew in and joined the Laughings, and with careful scrutiny we found several in the flock!  That was a nice addition!

We felt the cold front hit with a vengeance (and we could see the rain squalls all around us), so we piled in Diggory and headed down to Oliviera Park with the idea that since it was getting dark so early, the parrots might start staging early!  We actually started getting a little concerned, as when we arrived, there wasn’t a squawk to be heard for a long time, until after about 15 minutes I spotted a large flock wheeling around at the other end of the park!  We were undecided about whether to move or not because they’d first come close, then head off again, then act like they were coming back!  They finally sounded like they had landed, so we headed over to where we saw them go down (along with several other birders who wheeled in at about the same time J) and enjoyed them chowing down on some anacua berries!  The guys were ecstatic; despite the failing light they got some passable pictures, and before long the smaller White-fronted Parrots came flying in, their higher and faster chep-chep-chep calls very evident, while the Redfronts gave their distinctive cleo-chop-chop calls along with several other conversational sounds!  We couldn’t find any of the Red-lored, Lilac-crowned, or Yellow-headed Parrots that often hang around, but the guys were happy with the Redcrowns, as those were the “countable” ones! 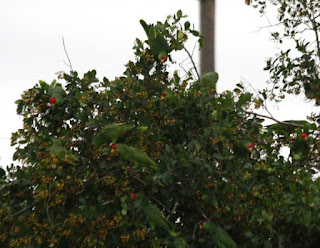 We padded the list with one of the feral Muscovies you can always find in Brownsville (they were very close to making 200 for their Texas trip), then had a celebratory dinner that night; I personally ended the day with 94 species, and we probably would have broken 100 had the wind not been so bad and we could have picked up a few more songbirds!  My personal list for the three days of guiding (theirs would be much bigger, of course) was 167!