Mom and Daughter Take a Break from the Butterfly Tour to Bird!


We had a mom and daughter team here on a butterfly tour, but they wanted to do a little birding on the side, so I was called in to be their guide!  Mom Bonnie and her husband (who didn’t come on the trip) were experienced birders and had been to the Valley before, but Tara was new, so almost everything was new for her!  So since we wanted to avoid the places they’d be going anyway on their butterfly tour, we first hit Anzalduas County Park (with a quick check at Granjeño for the Burrowing Owl – he wasn’t there, but a Cooper’s Hawk blasted by instead) where Bonnie was amazed at how blue the Rio Grande looked!  (Being able to look right into Mexico like that is always a big hit! J)  A Kestrel greeted us on the entrance road, and crossing the dike we had several shorebirds in the semi-flooded field; most were Killdeer, but we also had a few Least Sandpipers in with them.

Dike over the floodway heading into Anzalduas County Park
We had barely passed the entrance shack before Tara spotted a “red bird” at the top of a small tree, and sure enough, a lovely Vermillion Flycatcher was flycatching!  I jokingly groused that someone had taken my favorite parking spot by the river (J - the fisher people were in early; in fact, a couple pulled in right behind us asking if we were fishing or birding!  They were relieved that we weren’t taking their favorite fishing spot… J) and pulled out the scope when one of Anzalduas’ signature birds, a Black Phoebe, started flopping around on the wire fence line!  He was joined by a female Vermilion, so we got great looks at these two little aerial acrobats!  There wasn’t much of anything on the river except a Great Blue Heron, so we walked along the edge where a large flock of birds in the big field turned out to be my first Western Meadowlarks of the season!  I heard a Ringed Kingfisher, and sure enough, he rowed by over the river and gave great looks!  We heard some warblers in the trees but could only pull out a Ruby-crowned Kinglet and Orange-crowned Warbler (after which came the cracks about how you couldn’t see the orange crown…).  On the way back to the car I was commenting on how glad I was to get the Ringed Kingfisher (not a sure thing by any means) when he wheeled around and gave an encore appearance over our heads! 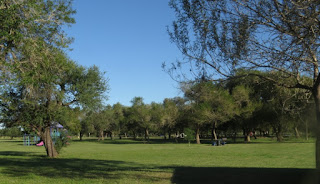 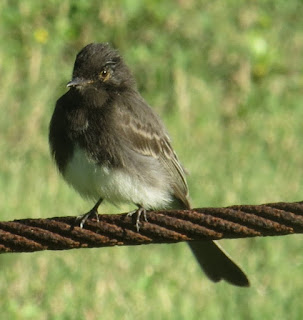 Black Phoebe, at the eastern edge of its range here!
From there we just cruised slowly around the park, making a stop at the “Secret Trail” hidden back by the dam that a friend had told me about.  You could still peek into a small window behind the dam from there; it looked like several Spotted Sandpipers were bouncing along the rocks.  We had a warbler in there that could have been a Nashville, but we just didn’t get a good enough look, but the consolation prize was a nice Couch’s Kingbird that landed over our heads and proceeded to eat a wasp! 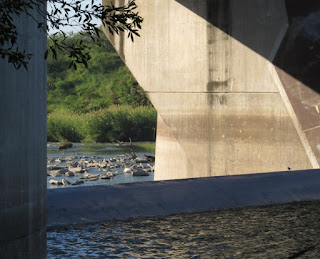 Window into the back area of the dam from the "Secret Trail" (and that's Mexico across the way...)
Continuing the loop, I pointed out a couple of Bronzed Cowbirds to them, and at one stop I heard a House Finch go over and had to explain that these birds are considered accidental in the Valley, even though they’re a “junk bird” everywhere else; Anzalduas is actually one of the more reliable spots to get this bird.  In the distance I heard a Gray Hawk; many heard-only things were just too far away to try to pin down.


No sign of the Zone-tailed Hawks, so we headed over to Quinta Mazatlan as Tara wanted to see Chachalacas, and there you have to practically kick them out of the way!  Right in the parking lot were several Clay-colored Thrushes, and at the start of the old Birding Trail we heard a Black-and-white Warbler singing!  That was another “want bird” for Tara, so we headed in, trying to pish it out (in the meantime she was asking me what this grating sound was; I said it sounded like a frog of some kind, but as we got closer we discovered it was the domestic ducks next door…).  No luck, even though we got a couple of unseen Wilson’s Warblers to respond.  Over at the new pond, several Red-bordered Pixies were nectaring, which was very exciting, seeing as that’s one of our signature butterflies!  Swinging around the back of the mansion, the Buff-bellied Hummingbirds were playing hide and seek, but one finally allowed us to get a good look at the feeders, which we hit just as a field trip was leaving.  In a little alcove a Long-billed Thrasher called and let us get a head look, while several more Clay-colored Thrushes zipped in and out, feeding on the berries that were there (I never thought I’d see the day when I’d say, “Just another [Clay-colored] Thrush!”)!  Sitting at the feeders a lady Golden-fronted Woodpecker was raiding one of the hummingbird feeders, and off to the side a Curve-billed Thrasher gave us great looks while giving his rude whistle!  Some Olive Sparrows called behind us (but wouldn’t show themselves naturally), but on the way out a nice fat Chachalaca walked out onto the trail and strutted his stuff! 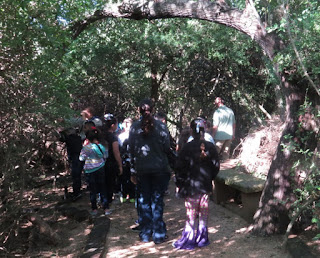 Showing a Chachalaca to a school group 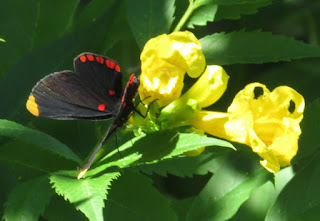 Red-bordered Pixie
Next stop was Edinburg Wetlands, which I had touted as another great butterfly stop.  We headed straight to the South Pond (on the way to which another pair of Ringed Kingfishers flew overhead), which was disappointingly empty except for some Neotropic Cormorants and some egrets.  On the way back, however, Bonnie spotted a Black-and-white Warbler crawling along one of the mesquites!  Tara was able to get a great look (well, we all did, really J), so that was fun!  House Wrens were giving us fits with their varied calls, and somewhere way back in the bushes a Bewick’s Wren gave its zhrink zhrink call. But once out in the open, we saw streams and streams of Turkey Vultures going by, then kettling as they caught a thermal!  (I had heard news from further north that thousands of vultures were headed our way, so I wasn’t too surprised…)  A pair of Ospreys circled overhead, and in the parking lot we saw another thermal with three Swainson’s Hawks in with the TVs!  We saw another Long-billed Thrasher, but again the North Pond didn’t have much except a few egrets, but one of the Ringed Kingfishers had landed along the edge giving great scope views!  Pied-billed Grebes were new for the day, and a Tricolored Heron was nice to see.  Tara spotted a Common Gallinule with its pretty red bill, but I couldn’t even find any Black-bellied Whistlers, which is usually a staple here! 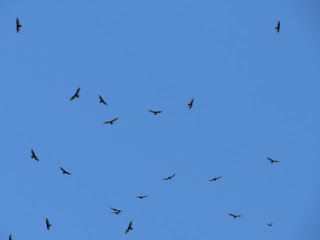 Turkey Vulture kettle
We had to get back, so we headed down to Alamo with a grand total of 61 species for the morning!
Posted by Alamo Inn BB Gear and Tours at 1:34 PM