We were wondering if we were even gonna have a Birder Patrol outing this month, as the rain threat was up to 70% at one point!  But the threat pretty much went away by Friday, but it was cold and windy (our British visitors – Ken, Sally, and Roger – thought they were back home J)!  For the uninitiated, the Birder Patrol is an organized field trip held the fourth Saturday of every month (except December), the proceeds from which go to support the educational endeavors of the Arroyo Colorado Audubon Society.  Our destinations are generally out-of-way-spots that most visiting birders (or even locals) don't explore on their own, and we also take into consideration what rarities have been reported during the month.  This month some Mountain Plovers were reported along Jara Chinas and 14 Mile Road, which is part of the "Sparrow Road Route", a route on the far western edge of Hidalgo County and is famous for (of course) sparrows, plus other "western" type birds. The Brits (who were staying at the Alamo Inn at the time) got wind of the Mountain Plover report and were very interested, so I invited them to come along!  As it turned out, they were the only takers along with a Russian gentleman named Slava and his wife Lori (now living in St. Louis), with Pat Heirs and I leading the group.
After picking the Brits and Pat up at the Alamo Inn we all headed to the Whataburger in La Joya, where Slava and Lori joined us, after which we headed up the road!  Despite the weather we did have a good selection of sparrows (Slava was thrilled to get the Black-throated as it was a life bird, but because he was the tallest of us all he was the only one to actually see it), including a single Lark Bunting that only those of us in the front car got to see (it took off the minute I ID’d it).  We had several Vesper Sparrows, and one Cassin’s sat up on the wires.  Pat stopped at a field where a probable Prairie Falcon scared up the meadowlarks, but it was gone before she could get a good look; she said it was definitely a large falcon and certainly pale enough for a Prairie, so I wouldn’t doubt it!  She also spotted a Say’s Phoebe way across the field, but thankfully another one flopped next to the car a little further up the road. 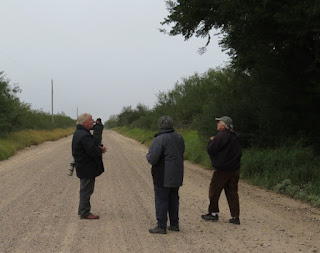 L-R:  Ken, Sally, and Pat along Jara Chinas Road (aka "Sparrow Road") with Slava shooting something in the background...
The wind kept most of the stuff down, but we had a tremendous flock of blackbirds block our path for a few minutes, and we had several young White-tailed Hawks put on a show before a nice adult took off for us.  The most numerous raptor was the Caracara, and down a side road a Black Vulture perched on one of the tankers, which was a life bird for Roger (and a new bird for the route for me)!

A moment before, this Red-winged Blackbird flock literally covered the road!
A little woody patch had a flock of Yellow-rumped Warblers, but Slava photographed a Chipping Sparrow that none of us were able to relocate, and Sally got on a Yellow-throated Warbler that was for her eyes only (what else would be black and white with a yellow throat??)!  At the Mountain Plover spot, the place was empty except for meadowlarks and Lark and Vesper Sparrows, but a huge flock of Horned Larks absolutely captivated the Brits (they also have Horned – Shore – Larks, but not in these numbers)!  We were to see more and more of them along the “square”, along with a couple of Long-billed Curlews.  We were hoping for geese in one of the fields but only had two Whitefronts fly over. 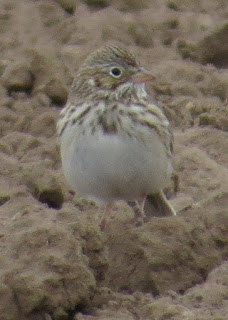 Vesper Sparrow in the "Mountain Plover Field"
Once at the north end everyone pretty much went their own way - Slava and Lori to do more photography and the rest of us to head back to Alamo!
﻿
Posted by Alamo Inn BB Gear and Tours at 8:42 AM