With the reappearance of the Yellow-faced Grassquit at Estero Llano Grande, I asked MB if that was something she’d be interested in, and it certainly was, so we changed plans and headed over to the park!  But first I was curious about this so-called “Donna Sod Farms” where a Ferruginous Hawk was reported on eBird, but the location was pinned as being south of the reservoir!  MB was certainly game for that, so we headed over, picking up lots of Bronzed Cowbirds on the fly at the Bit-O-Heaven RV Park!

Once on Valley View Road we first took a quick look at the reservoir itself, which was pretty empty except for a couple of Coots and a Double-crested Cormorant; Tricolored and Little Blue Herons flew over the road, and a Snowy Egret also made a pass, but those were the most exciting waterbirds (we were hoping for a longshot Eared Grebe).  But the real show was the lineup of swallows on the wires, and also on the road itself:  mostly Barns, but also Rough-winged, Tree, a couple of Banks, and a couple of Cliffs, but we were able to pick out one Cave, which is the one MB wanted to see!  While driving down to the fields an Upland Sandpiper called several times overhead and unseen…

Barn, Tree, and Rough-winged Swallows are visible in this shot!

The ”sod farms” actually looked like baby cane (or corn, or something…), so we turned around and took Business 83 over to International and then down to Estero Llano Grande.  After checking in we scoured Ibis Pond for the Fulvous Whistling Ducks I had heard the day before when my friend Pat and I made a run for the grassquit (dipped that time, too L), but they were nowhere to be found, although all the other regulars were there, including the Cinnamon Teal (the Mexican was probably in there, too, but we couldn’t pick him out).  So we made the circle that would touch on all the ponds in hopes of finding the Fulvous.

A quick survey of Avocet Pond added several Least Grebes, and we were out on the Spoonbill Trail boardwalk when I heard a Red-crowned Parrot cleo-chopping, but when I looked back the bird flying at us was a Caracara, with a White-tailed Kite hot on his tail!  Curlew Pond was empty, and shockingly so was Dowitcher Pond except for another Coot and a pair of Mottled Ducks!  A nice Swainson’s Hawk circled in front of us, however!  Heading over the bridge, we ran into park host Susan Keefer with a hopeful birder, so we headed straight back to the “Fenceline Trail” (which is actually the maintenance road), where birding buddy Huck (another park volunteer) had found a female Lazuli Bunting!  Unfortunately no one else could refind it, although we did spot a couple of Indigo Buntings.  There had been a little more action along this stretch:  the gang had found both Worm-eating and Hooded Warblers, and Susan got a glimpse of the Bell’s Vireo, but I think we only got to see the Hooded and a very confiding White-eyed Vireo.  In the raptor department a Harris’ Hawk sailed over along with a quick-flapping Black Vulture. 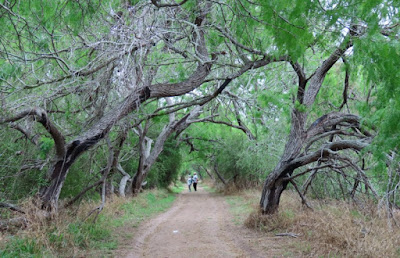 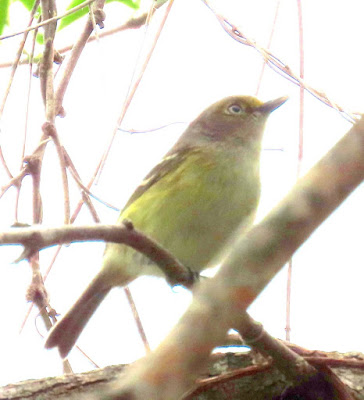 We decided to give it a half hour, so when that was up and no grassquit was to be had, we headed into the Camino del Aves area as MB wanted a better look at Verdin.  Coming to the end of the connector trail she saw a flycatcher that looked like a Great Crested to her; having heard one in that same area the day before I wouldn’t have been surprised, but I never got on it, and that started a conversation about Myiarchus ID!  Shortly we did have a bird in the bush which turned out to be a friendly Bewick’s Wren, and a bright chirp did betray the presence of a Verdin, but like most of them, he just didn’t wanna play ball… L  So we dragged ourselves back to the Visitor’s Center, giving Ibis Pond one last looking over (got quite the knock-down drag-out between two Mottled Ducks on video while MB was in the ladies’ room), then heading to the Tropical Zone. 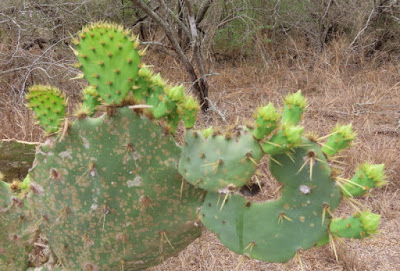 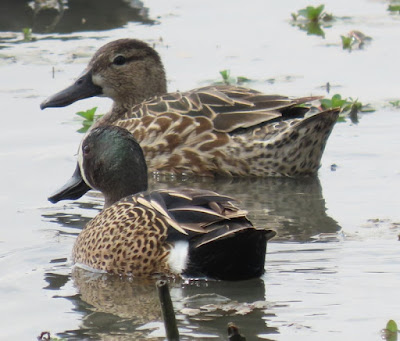 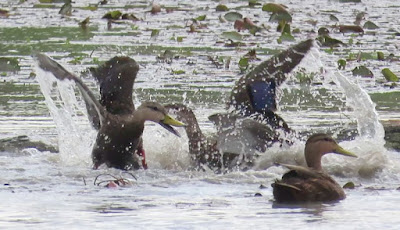 Two Mottled Ducks having it out...

The goal was to find the lady trogon, but we didn’t get far:  we first spent several minutes at the Green Jay Trail Drip, where after waiting patiently two Nashville Warblers came in (along with an Orange-crowned and a White-tipped Dove)!  We took the little “warbler trail” towards the interior of the Zone, and had quite the feeding flock:  three Northern Parulas were buzzing at each other, a nice Blue-headed Vireo came in close, a couple of titmice showed off their cuteness, and a Yellow-rumped Warbler made a brief appearance along with a Black-and-white Warbler.  Carolina Wrens were singing but, as per usual, didn’t show themselves…  A Myiarchus popped up along the trail and gave good looks and photo ops, which looked too pale for Great Crested, so I called it a Brown-crested, and sure enough, after he flew he (or another bird) started calling down the road! 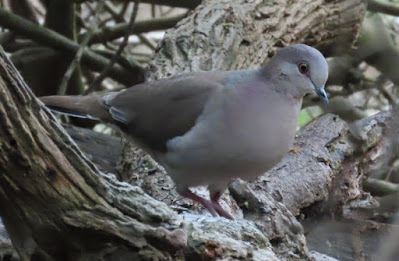 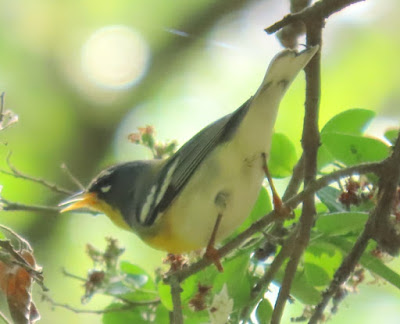 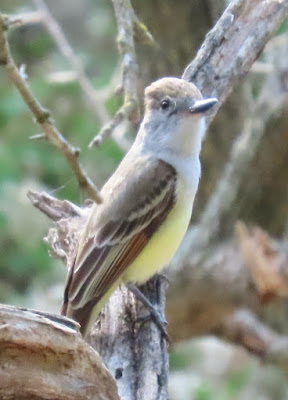 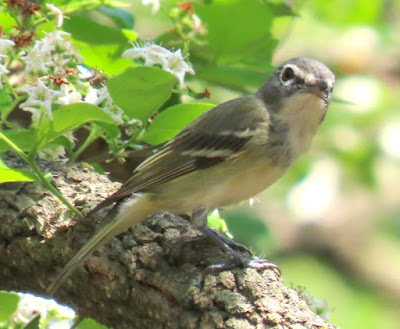 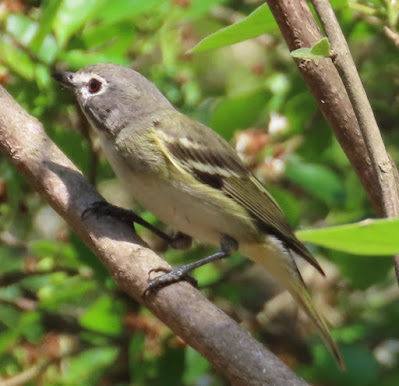 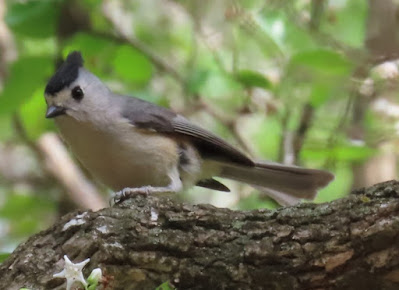 Along the main road we looked in vain for the trogon, but did catch a Scissor-tailed Flycatcher drifting overhead while trying to re-find the Brown-crested Flycatcher.  We ran into Ranger Javier (who was showing the Pauraque to some folks), and when MB mentioned wanting to see a Bobcat, he sent us to the trail in back of the blind (not that we’d see one, but once a group he was leading had a mother and her playful kitten back there who paid them no mind)!  Not surprisingly it was dead as a doornail, so we decided to sit in the blind for a while, where there was a bit more action:  in addition to the Red-winged Blackbirds, we eventually had Altamira Oriole, a Buff-bellied Hummingbird, Golden-fronted Woodpeckers, and one of Tony Henehan’s banded Green Jays!  When another gentleman came in we decided to move on, enjoying Chachalacas back at the visitor’s center.  Marla was gonna sit at the feeder behind the VC while I used the facilities, but a Roseate Spoonbill in Ibis Pond got her back on deck! J 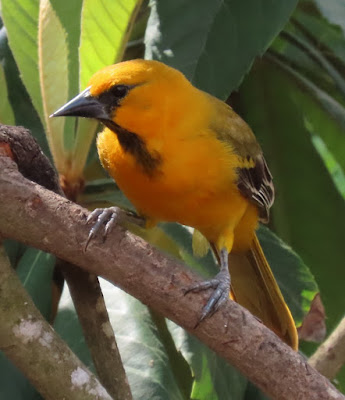 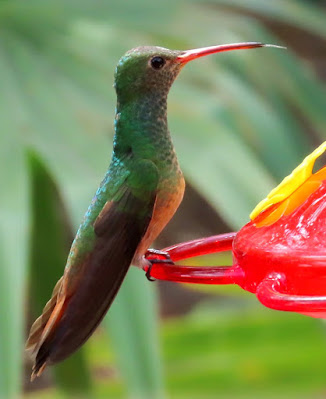 Buff-bellied Hummingbird showing off his tongue... 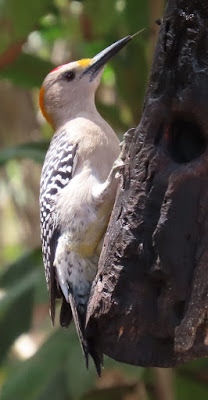 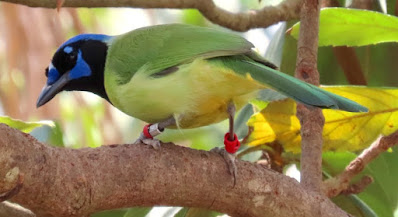 Here's what Tony had to say about this Green Jay:  "I banded this individual July 10, 2020 near Pauraque Hall. At the time, it was a Second Year bird."  The color combination identifies the individual, not necessarily the numbered band! 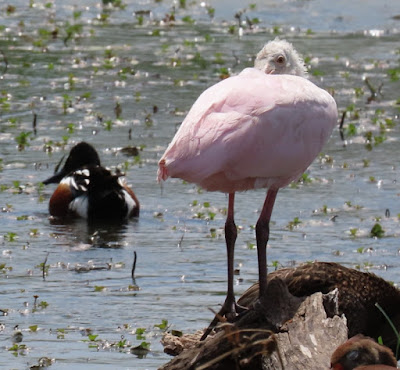 We were debating about going to some additional places, but we were both pretty shot, so decided to call it a day.  But we still had a hard time making it out of there as a strange high-pitched call got my attention at the end of the brick walkway, and when MB described it as something with wing bars and an eyering, I suddenly heard the lower chortle of the second half of the song – it was a Ruby-crowned Kinglet tuning up!  All in all, we managed 79 species, which isn’t bad for a half-day!  Bird list: