MB from Chicago was spending several weeks with us (I was impressed with the hammock she put up J) and wanted to see “everything”, so since I was only available one day a week, fellow guide Tiffany Kersten helped put together a team of guides to take her out several days a week, and that worked great! MB was one of those energetic gals who delighted in everything, so even if something wasn’t a “lifer”, it still warranted attention and awe (it’s just that the lifers elicited even more excitement and awe J) !  When we chatted on Monday (trying to figure out an itinerary for the next day), one of the “places to see” on her list was Santa Ana, so seeing as that was right down the road, we decided to head there the next morning.

It was a pleasant 70 degrees when we left, but overcast most of the morning, and even misting pretty good when we got out to Pintail Lakes, but I’m getting ahead of myself – in the parking lot a Couch’s Kingbird was calling along with a buzzing gnatcatcher, and the Starlings serenaded us as we passed through the breezeway.  Things were actually pretty quiet in the woods; about the only things we heard were Cardinals and Carolina Wrens, plus a single American Goldfinch doing his ba-boy call.  Nothing was showing itself in the gloom until we got to Willow Lake, where there were several Coots and a few Blue-winged Teal.  Where the Tower Trail met the tour road a pair of White-tipped Doves strutted across, and Yellow-rumped Warblers chipped from the trees as we made our way out to Pintail Lakes. 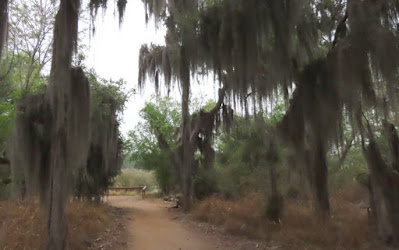 And that’s where all the action was, despite the wet:  we were immediately met by a female Vermilion Flycatcher and an Eastern Phoebe in a scraggly tree, and the first pond we came to was loaded with Coots, Shovelers, Gadwall, all three teal, Black-necked Stilts, Least Sandpipers, and Common Gallinules!  On the far side of the pond was MB's target, the Least Grebe, so we ended up cutting over to the main trail where she could get a closer look, and there turned out to be several more Least Grebes in the next pond over – one was even gathering nesting material!  In amongst them was a female Ruddy Duck, which was another lifer!  Across the way a Tropical Kingbird tittered, which she had already seen in New England of all places! 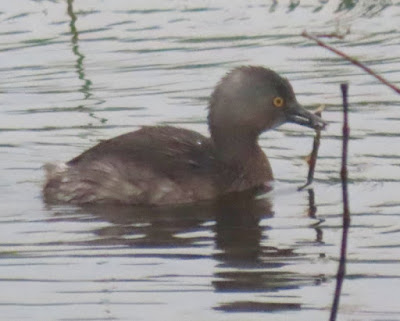 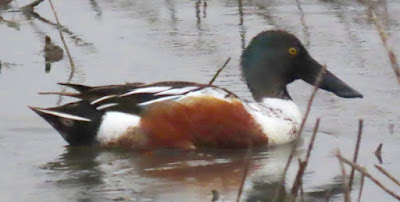 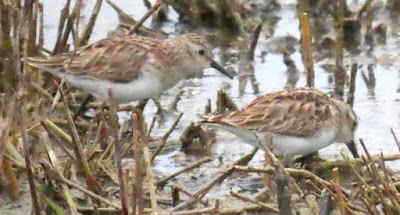 Dragging ourselves away from there we headed towards the end of the trail where I was hoping to find the specialty kingfishers.  Instead we spooked up a flock of sparrows, which included a couple of Larks (another lifer), some Savannahs, and some Lincoln’s.  At the end of the trail several Rough-winged Swallows sat on dead twigs, but this other spindly tree in the middle of one of the lakes also had a couple of Tree Swallows, a Cliff, a Bank, and a Barn as well!  Both White and White-faced Ibis sailed in to join all three egrets, and on some deadwood a female Anhinga posed with a Neotropic Cormorant and another Cattle Egret.  Some Black-bellied Whistling Ducks wheeled in as well as we continued around the back side of the lake towards the Rio Grande.  At that point I heard the machine-gunning of a Ringed Kingfisher, and before long he flew over the treetops! 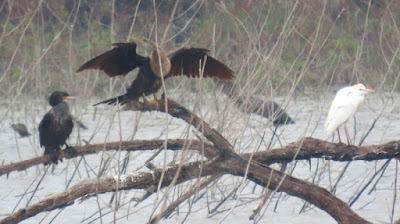 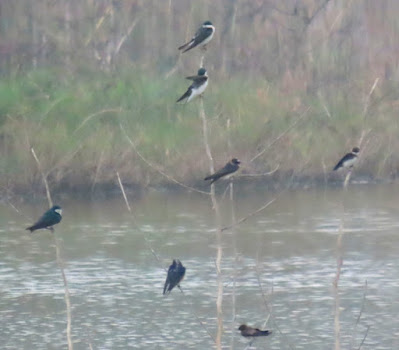 Swallow Tree with five species of swallows (Tree, Cliff, Bank, Barn, and Rough-winged)!
Can you find them all? 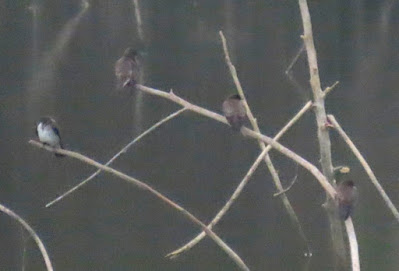 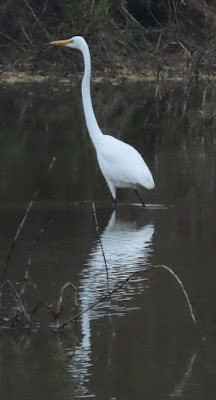 We couldn’t find a Green Kingfisher at the overlook (although a Long-billed Thrasher was singing), so we headed back to the main trail, waving to a couple of Border Patrol agents that came driving up (we wondered if we set off a sensor by being back there J)!  After encouraging them to find a Green Kingfisher for us J we poked along, enjoying a beautiful Osprey overhead which inspired a story about the Bald Eagle nest MB monitors back home!  Back at Pintail Lakes, we spotted a Pied-billed Grebe getting his pied bill, as well as a Snipe that kept flushing and hiding!  But as we approached the bench where the Lark Sparrows had been before, up popped a Grasshopper Sparrow, and he just put on a great show!  That was another life bird MB had been wishing for!  A Greater Yellowlegs flew past, and on the way to the cutoff a nice Long-billed Dowitcher did his sewing-machine feeding behavior close to shore! 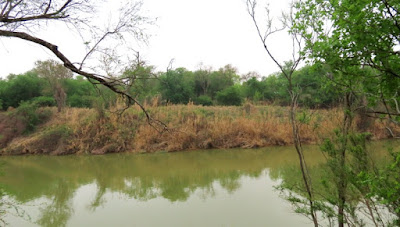 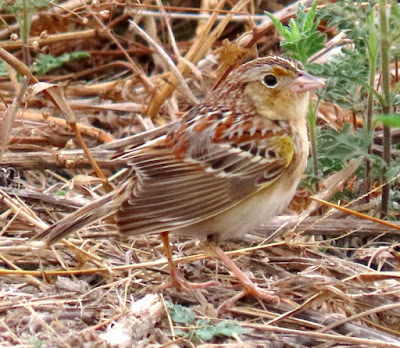 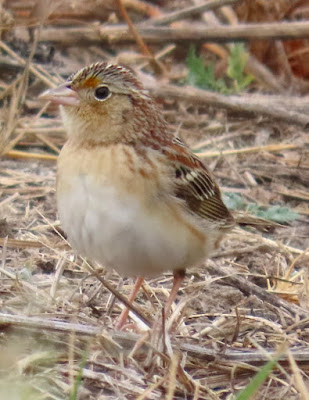 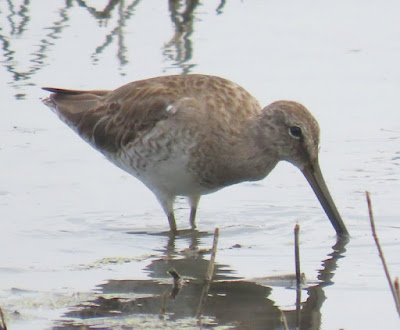 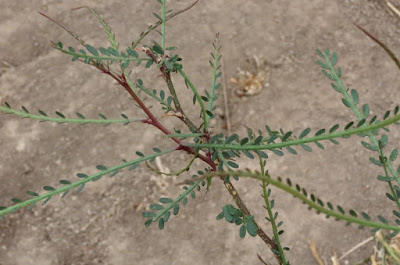 We were starting to drag as we made our way along the cutoff, trying to nail down a Verdin and a White-eyed Vireo (that one wasn’t critical as she had seen one close enough to “see its eyelashes,” at least briefly) but then MB spotted a hawk above us; what she saw was pretty low, but what I saw in the gap was a huge kettle of Broad-winged Hawks way up high!  (That happened to be her low one as well…)  What a show!  A Swainson’s Hawk drifted by lower down where we could get a good look at his wing pattern.  The same Border Patrol pair wheeled by (they hadn’t found a Green Kingfisher J), and up on the main road we also spotted a harrier before almost getting run over by a maintenance guy! J 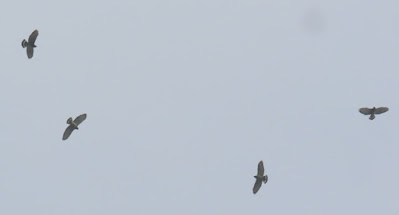 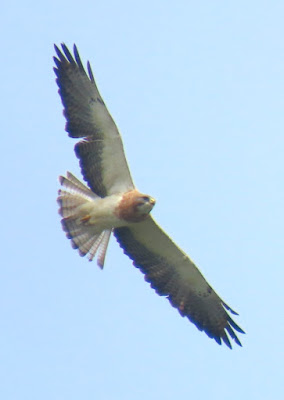 Our morning was up, but MB wanted to grab her point-and-shoot (she had been lugging a nice Nikon with a long lens) so she could photograph some mystery plants and just take her time enjoying the place.  We had driven separately due to COVID, so I headed on home, having logged a respectable 68 species for the morning!  Bird list: