When the Birds Are VERY Cooperative!

Well, if yesterday was a Day of Disappointments, today was definitely a Day of Delights, as we had a list of specific target birds and we managed to find all of them! J  Since the becard was still being seen at Estero first thing in the morning, we decided to head there first and work backwards.  We headed straight in to the Tropical Zone once we got there, hearing Black-bellied Whistling Ducks in the distance and stopping briefly to enjoy a Kiskadee family at the top of a dead tree, only to discover that a pair of Clay-colored Thrushes was also playing tag amongst them! First target out of the way! 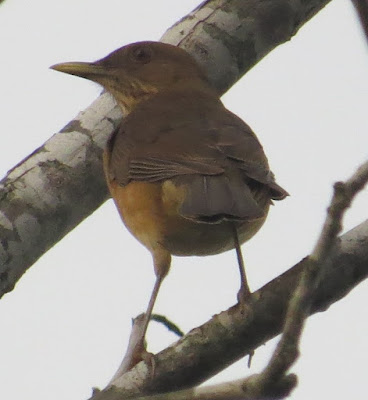 The Screech Owl wasn’t showing, so we meandered down to Pauraque Hall, where except for chirping Orange-crowned Warblers it was rather quiet.  Since they had seen a female becard in Arizona before, seeing this male was only a “nice to get” bird, so we agreed to give it 15 minutes as we wandered around the area and checked the trees.  And right about the time my timer went off, Steve announced that he had the bird!  Thankfully Marion saw the bird as well, but I couldn’t get on it before it flew (at least saw that), so we left the bird with the group that had just shown up in hopes that they could refind it!  On the way out we enjoyed an Altamira Oriole and another obliging Clay-colored Thrush. 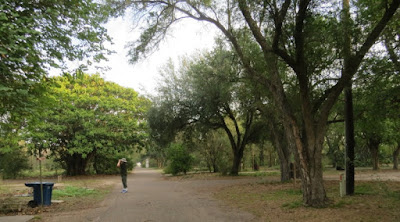 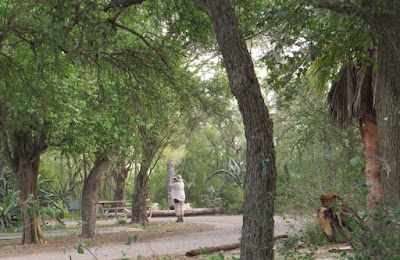 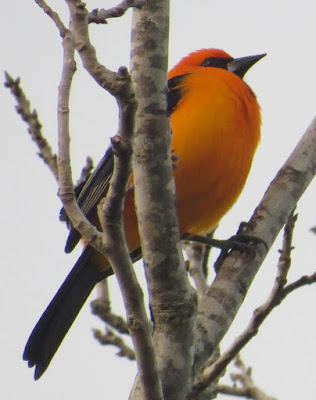 A beautiful Altamira Oriole shows off! 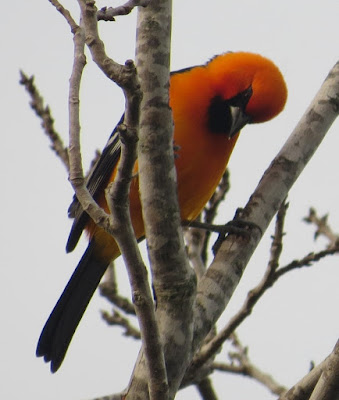 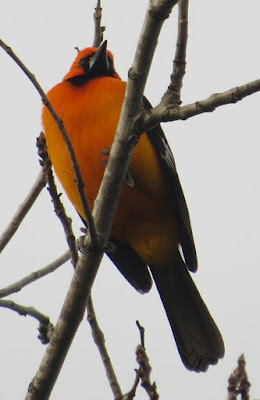 I couldn’t find the Pauraque that had been on the corner when I had Gary and sons with me last November, so we headed to Alligator Lake, dutifully padding the list with the ducks in Ibis Pond.  Dowitcher Pond was in terrible light, so about the only thing we added passing that was a bobbing Spotted Sandpiper.  A brief going-over of Grebe Marsh added a herd of Least Grebes and more ducks to the list (no toothy alligator this time), and turning the corner we added a ton of Yellow-crowned Night Herons with a token Black-crowned.  A White-tailed Kite hovering overhead was an added bonus!  Thankfully the Pauraque pair was right where we left them, and Steve and Marion got great looks at this cryptic bird! 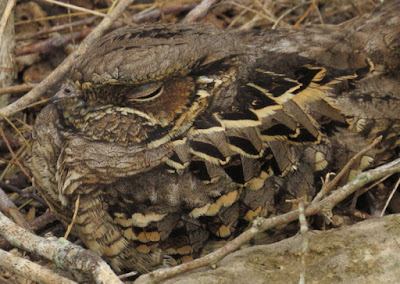 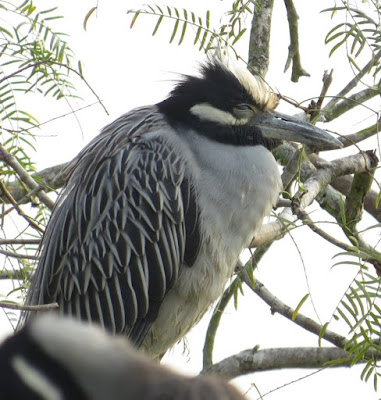 
On the way back we exchanged pleasantries with the morning bird walk, then spent a few minutes at the VC feeders to see if a White-tipped Dove would come back (Marion had seen one there earlier), and thankfully one made a brief appearance back in the bush, while Chachalacas raided the oranges, a pair of Curve-billed Thrashers chased each other, and a Buff-bellied Hummer put on a great show for a lot of happy folks! 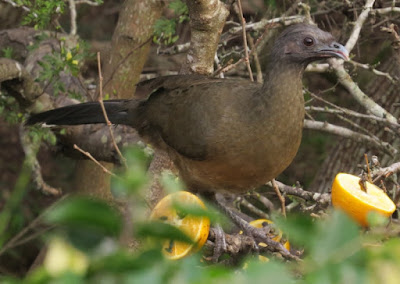 Since we had bagged the thrush and dove already, we opted to head straight to McAllen Nature Center for the Audubon’s Oriole. After parking a Pyrrhuloxia popped up, which was a nice bird for an urban area!  On the way to the check-in station I heard Green Parakeets first on one side of the road and then the other, but we never spotted them.  After checking in we headed straight for the feeder area where the oriole had been showing up (and where a Birdathon was taking place, joined a little later by fellow butterflier Ken) and took our spots on the picnic table.  One of the first birds to come in was the famous leucistic female Cardinal (first clue was that she was lacking the sooty face), followed by a Long-billed Thrasher that hung out near the drip, while Green Jays made repeated appearances.  Once again, just before my timer went off, the Audubon’s Oriole came tearing in, and eventually made his way over to the seed (!) feeder and proceeded to stuff his face!  What a beauty!  A nice White-tipped Dove decided to come out into the open just before we left as well! 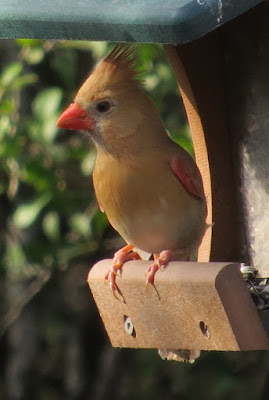 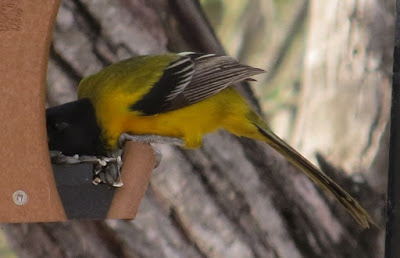 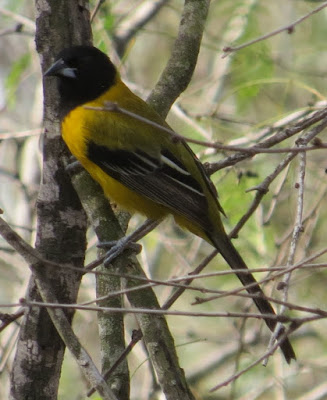 
Next stop was Anzalduas for the Sprague’s Pipit, and on the way we happened to see a White-tailed Hawk with what looked like snake in his talons circling overhead!  Once at the park I played the Sprague’s call note for them, and warned them that the birds were flushing nicely but not landing where you could see them, and that was the case today; we thought we had one surrounded, and I was convinced he had actually crawled off somewhere, when he suddenly burst from the grasses!  Marion got a great look at the tail pattern of a bird that popped up in front of her, but that’s about the best look we could promise at that point.  After using the restrooms (and picking up the obligatory Black Phoebe) we circled around and found a “Mexican” Duck that definitely had a bit of “Northern” Mallard in him, as he had a white tail and a green gloss to the top of the head!


After pretty much bagging everything they really needed, we opted to get lunch at Stripes and then head to Bentsen to chill at the feeders!  Marion was interested in having the butters pointed out, so at the VC we found several White Peacocks (I never really realized they had blue bodies until she pointed that out!) and a Common Mestra fluttering around, but after I sent them to the Gatehouse Feeders while I used the restroom, after coming out I stumbled across this little orange and black butterfly that looked kind of like an Elf, a very rare butterfly from Mexico!  I managed a shot of the ventral and left a message with Mike Rickard, one of our local butterfly experts, and then went to find my charges.  We were hoping an Olive Sparrow would come in to the drip, but one never came, and we just enjoyed more Green Jays and the ubiquitous Red-winged Blackbirds. 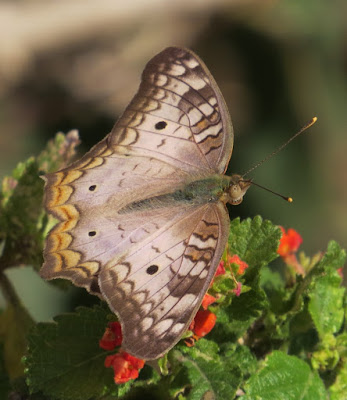 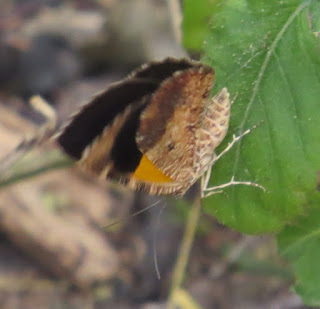 Mystery lep whose identity will be revealed later (don't wanna spoil the punchline...) 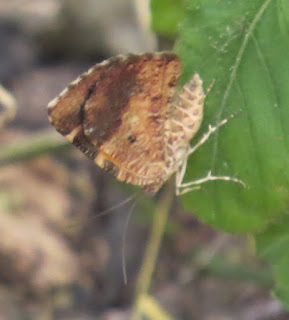 After a while we decided to walk to Kiskadee Blind (hitched a ride with the tram part of the way), where there was a little more action: Altamira Orioles, more jays, and even a “Myrtle” Warbler came in, along with a brilliant Mexican Bluewing!  When things slowed down we decided to walk over to the Green Jay Blind, and on the way over I was telling them about our vagrant Red-naped Sapsucker that had visited for several winters in a row, when suddenly a sapsucker popped up!  She turned out to be a female Yellow-bellied (which was nicer to see for a pair of Californians J)!  At the Resaca the dock at the island was lined with Neotropic Cormorants, and Steve spotted a Tricolored Heron over there as well.  Like the Kiskadee Blind, the Green Jay Blind was pretty active when we got there with lots of jays and an immature Altamira, but then it quieted down, so we started back, planning on hitching another ride with the tram should we run into it.  We did see a tram, and it happened to be Ranger Roy leading the afternoon tram tour (consisting of two people), so we hopped on and joined them for a bit.  He swung up to Kingfisher Overlook where we did indeed find a Green Kingfisher, but I then noticed Mike himself over at the butterfly gardens with his wife Ginny and fellow butterflier Jan Dauphin, so I rushed over to show him my picture.  He confirmed what I was afraid of – that it was actually a day-flying moth of some kind, so I determined to do a little research once I got home.  When I got back to the group and told Roy about it, he said, “Oh, yeah, that orange thing’s been fluttering around there for a while!” :-/ 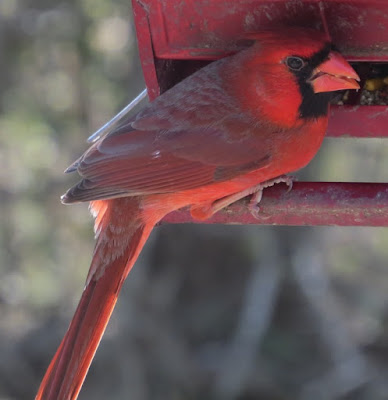 Male Cardinal blends in with the bird feeder! 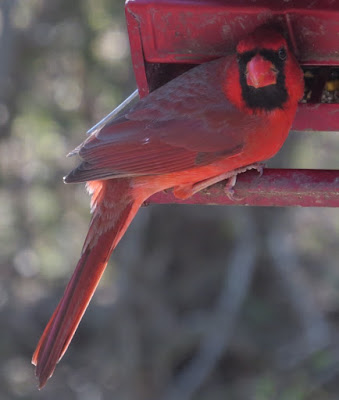 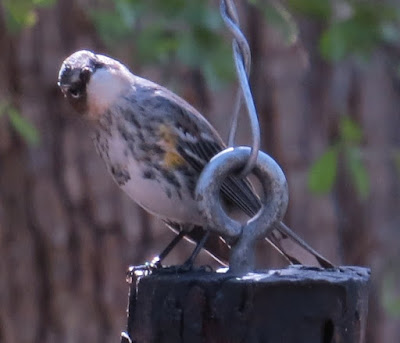 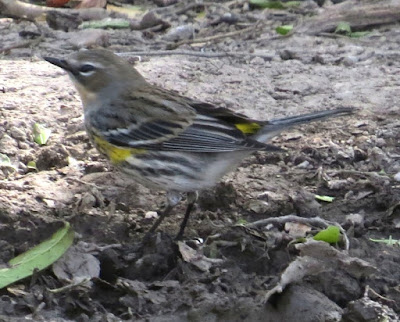 Here you can see where they got their nickname "Butterbutt"! 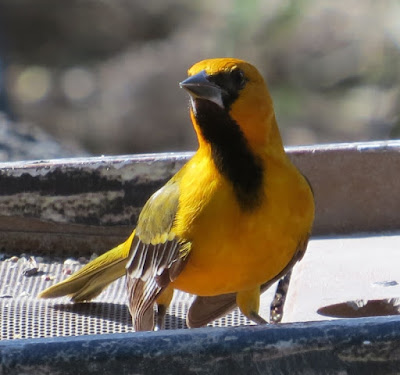 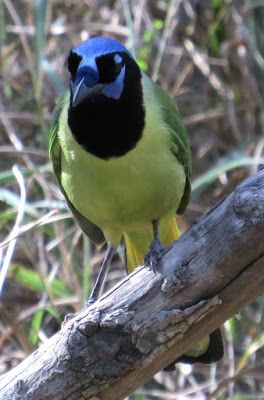 
I needed to get Steve and Marion to the airport so they could pick up their rental car, so we headed back to the parking lot and eventually back to McAllen, where we kissed goodbye (after plotting the map to the parakeet staging areas on 10th) and went our separate ways.  And the little moth turned out to be an Orange Satyr Moth – quite a beauty!