Today it was “Seedeaters Or Bust” for Griffin, as he and his mom had gone up to Falcon and Salineño the day before and dipped on both the seedeaters and reported anis, so we headed up once again with the seedeater being our sole target bird!  We got to the boat ramp first thing with the Osprey pair greeting us, then hiked the short trail, spending time at each of the “hotspots” where the birds had been seen in the past, along with other birders also looking for the same quarry!  We continued to work the trail, spending extended time at the “dead end”, and since the birds had been reported the day before, Griffin was content to wait it out at this spot rather than continue on to San Ygnacio or even Laredo.  While waiting we saw several swallows, including good looks at Cave, but also Bank and Barn, which we knew would be flagged by EBird, so Griffin got some documentation shots.  Not “flaggable” but still interesting were three adult Herring Gulls flying downriver, and a flock of Long-billed Curlews flying overhead!  A lovely male Green Kingfisher came in close and shone like an emerald in the morning sun!  Griffin spotted a small flock of Chipping Sparrows, and somewhere a House Finch chirped. 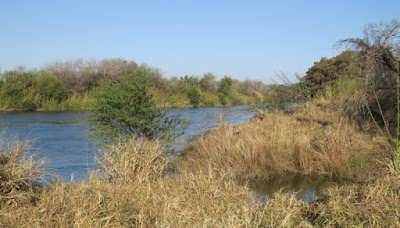 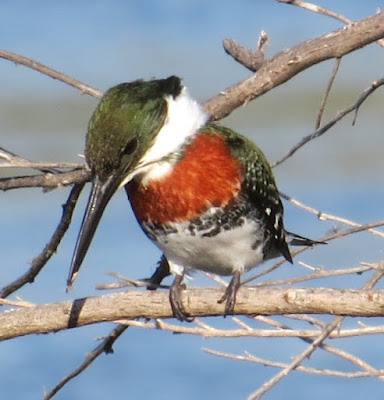 This male Green Kingfisher is also peering down, looking for breakfast! 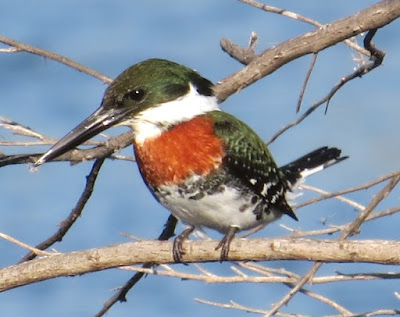 Patience was definitely the order of the day!  I made a few passes back and forth just to see if I could hear anything, running into birding buddy Michael who was also taking a couple of people around to see the avian sights!  They headed down towards the dead end while I continued to pace, and finally at one point heard the distinctive down-slurred whistle of a seedeater!  We all headed towards the sound, and at one point I caught onto movement and saw the bird just as it exploded from the cane and into the brush, never to be seen again… L  Griffin saw the bird but not well enough to see any detail (and all I saw was a pale body with some darker smudging), but he and Diane set up watch at the “hotspot” that’s about midway between the beginning and the end of the trail (it’s more of an overlook, with an Altamira Oriole nest off to the left which is a good landmark…).  I went on down to the cul-de-sac again, when before long I heard a whistle and yelled to Griffin just before a big ol’ white pickup came down the dicey side road and parked!  Turned out to be an unmarked Border Patrol truck, and the guys were amused, I think, when I blurted that I had a White-collared Seedeater and that my friend was desperate to see this bird and was going to be running down the trail any minute!  Sure enough, here came Griffin (followed more slowly by Diane), but the bird never showed, and we got to chatting with the BP guys, extending our appreciation that they were there, making things safer for tourists!

We did hear at least two birds on and off during the course of the day, but with the wind picking up (and the fact that invariably one of them was calling from the cane across the river), we were quickly giving up hope of getting a better look!  A soaring Zone-tailed Hawk was a nice consolation prize, and a Mexican Duck hanging out with what looked more to be a Mottled Duck was interesting, but no Muscovy came barreling down the River (although the cormorants would get us going for a minute).  While Diane and Griffin were back at the “Oriole Nest Watch Spot”, I was coming back from the cul-de-sac and heard a descending Keeerrr!  Sounding like the real deal and not a Green Jay imitation, I looked up to see a Gray Hawk making circles overhead, eventually showing off for all the birders scattered in various parts of the area! During one lull one of the Ospreys came in with a huge fish, took a couple of bites, and spent the rest of the time yelling at his mate/rival/whatever! 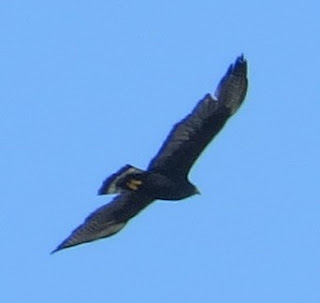 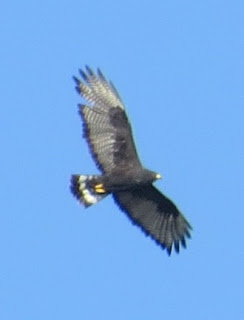 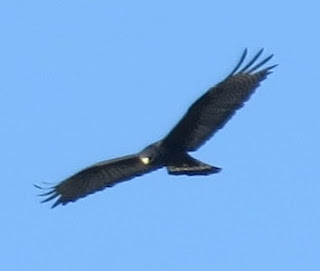 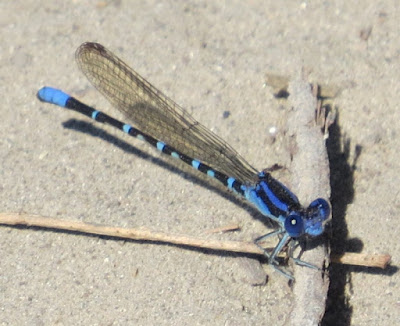 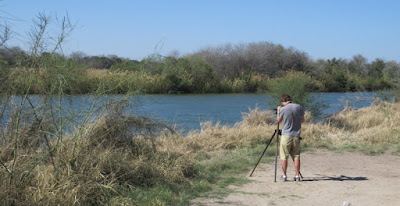 Griffin scans the Mexican side for seedeaters 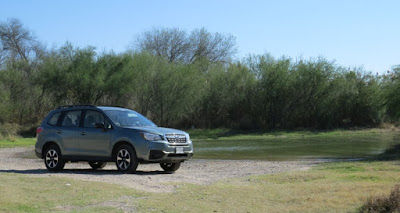 Towards 2:00 even Griffin’s patience was beginning to wane, so we all agreed it was time to veg at the feeders!  We hadn’t been seated five minutes before the Audubon’s Oriole showed up in all his glory!  What a show!  It was hard to break away when it was time to go, as even the Chachalacas were starting to come in, but we tore ourselves away and headed home with 63 species for the day. 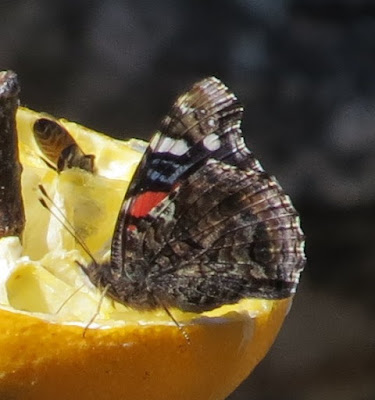 A "patriotic" Red Admiral indulges while we wait for the avian diners to show up... 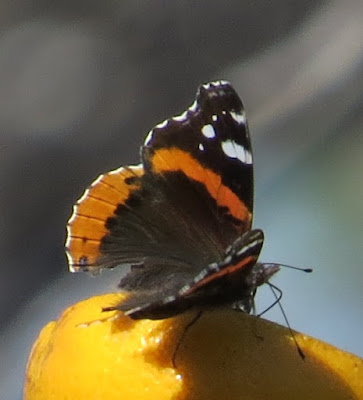 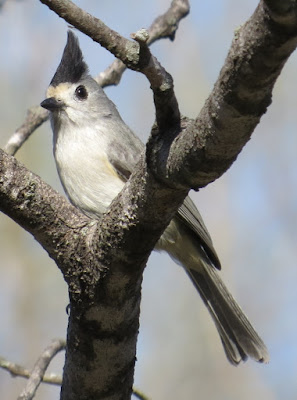 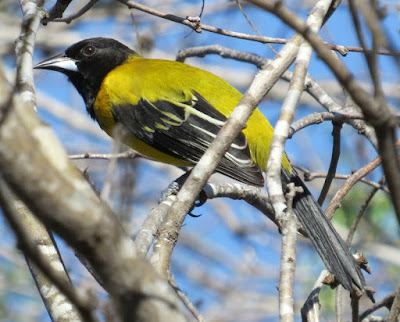 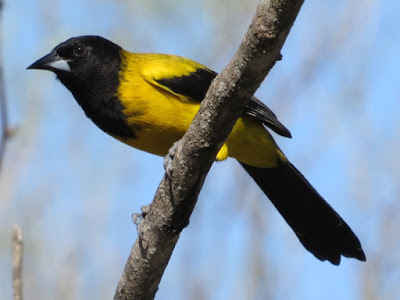 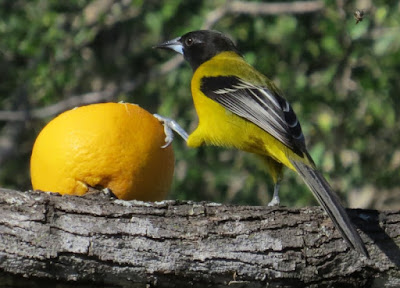 "This is MY orange!" 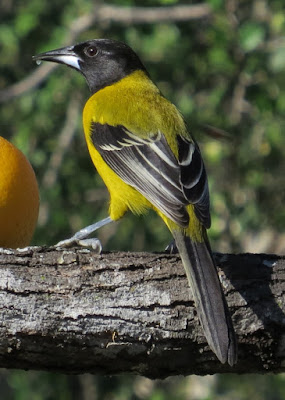