Day Two with the Great Danes - the Hope for a Fallout


The weather wasn’t as bad as predicted the day before, but we still felt hitting South Padre Island would be a good idea, as there could still be good fallout conditions.  But first, we made a stop at Old Port Isabel Road for the Aplomado Falcon.  Once you know where to find the hacking station (that the birds now use as a nesting platform), your chances of seeing the birds are pretty good, and this day was no exception, as two birds were in the dead tree near the platform!  More exciting for Pat and myself, however, was a Whimbrel that flew in!

The hacking station with two Aplomado Falcons on the left 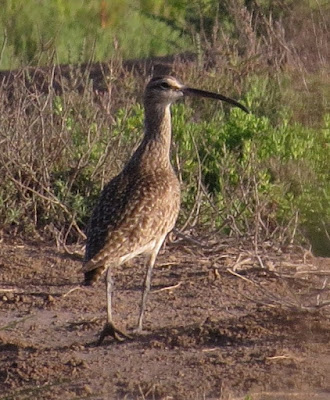 Whimbrel
From there we went straight to the Hwy 48 Boat Ramp, as not everyone had seen yesterday’s Wilson’s Plover, and there was a good chance of finding one here.  Unfortunately I could find none, and Pat thought she had one, but the wind was pretty strong and I think we went away empty on that target.  However, there was lots of other great stuff:  Black Skimmers, Franklin’s Gulls, Least Terns, Semipalmated Plovers, and the nearly-reliable Oystercatcher! 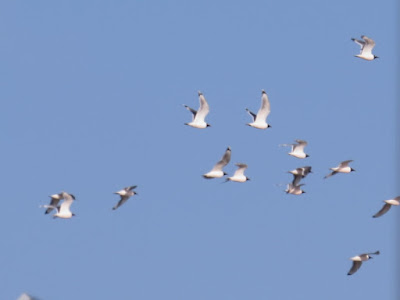 A flock of Franklin's Gulls wheels overhead
On to the Island we went, stopping at the Sheepshead Lots first, along with every other birder in the Valley! J  (Frands jokingly said, “What’s the occasion??” J)  One of the participants said it was like a shooting gallery:  there were birds all over and you didn’t know where to look first!  Worm-eating, Chestnut-sided, Tennessee, and Hooded Warblers all made an appearance, along with a female Blackburnian Warbler that had been hanging around!  Around the corner a Blue Grosbeak showed off, and a Warbling Vireo gave a look. 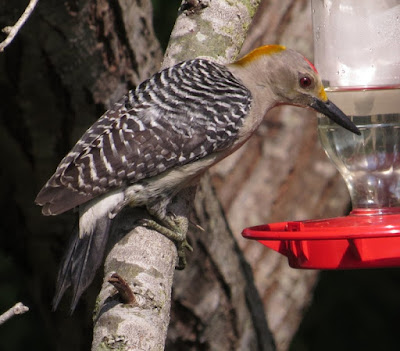 A Golden-fronted Woodpecker demonstrates how he can use his long tongue to raid the hummingbird feeder! 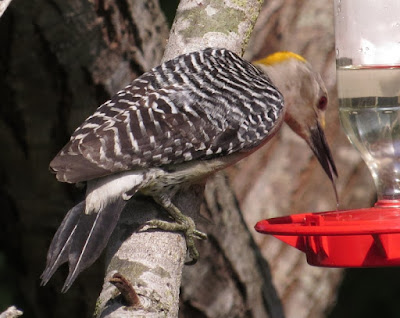 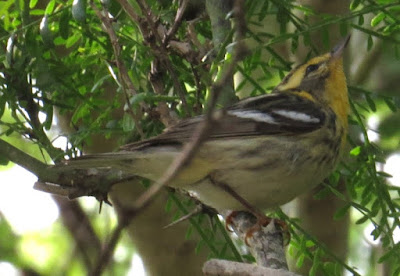 This early female Blackburnian Warbler caused a lot of excitement! 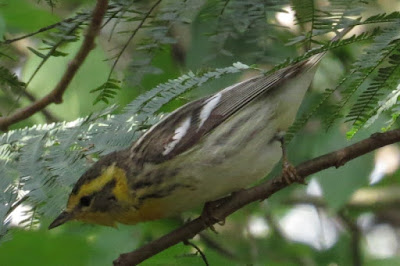 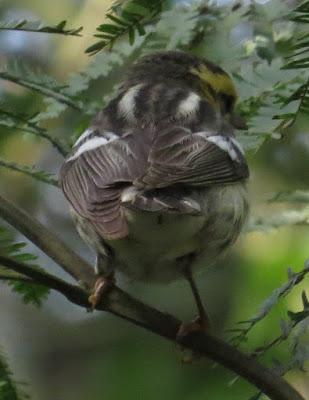 The white braces on the back are diagnostic in any plumage.


We had a hard time convincing them it was time to head to the Convention Center (lunch time J), but we eventually got them there and dropped them off with their picnic lunches while Pat and I got Subways.  We returned to find the crew focused on a Painted Bunting, one of their most wanted!  New migrants were coming in, including lots of Baltimore Orioles, the Kentucky Warbler, a Canada Warbler, a Rose-breasted Grosbeak, the continuing Prairie Warbler, and plenty of Swainson’s Thrushes.  Along the back side were lots of Baltimore and Orchard Orioles where Scarlet and George Colley, the dedicated caretakers of this oasis, had made a special feeding platform for them, and the gang was thrilled with a Dickcissel feeding with the doves and whistling ducks!  A stroll around the boardwalk bagged them their Least Bittern, but the Clapper Rails, as usual, were heard-only.  A lingering Red-breasted Merganser was new for their trip list, though! 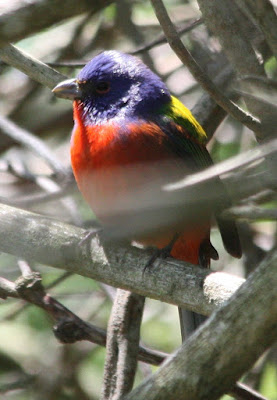 A shy Painted Bunting hides in the foliage 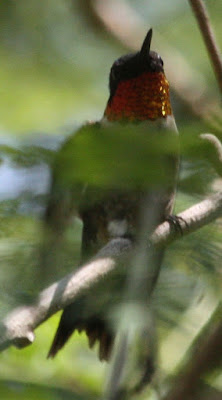 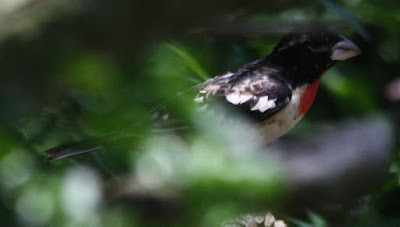 Male Rose-breasted Grosbeak not quite into breeding plumage yet 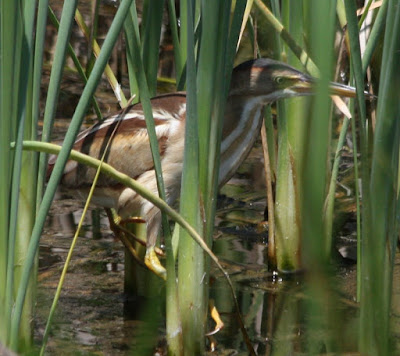 Female Least Bittern on the boardwalk 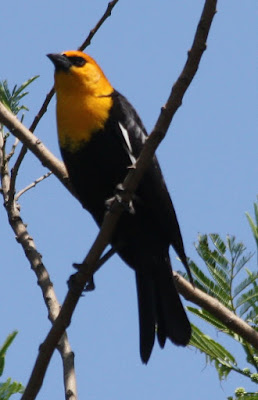 Yellow-headed Blackbird
Not surprisingly, the gang wanted to return to Sheepshead (after a quick run down to the condos to see the Peregrine), and that proved very productive, as they were able to add Cerulean Warbler and American Redstart to their list!  In addition to the female Blackburnian, a Yellow-throated Warbler also came in, and while the whole kit-n-caboodle got enticed down the road after the first Cerulean Warbler Alarm, I found an Eastern Wood Pewee in a vacant lot. 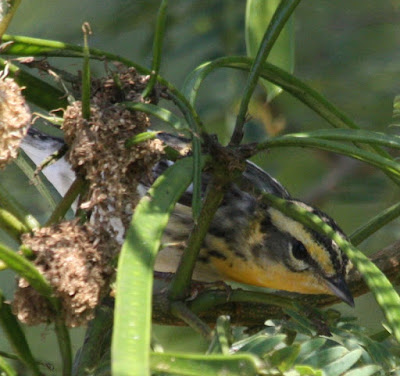 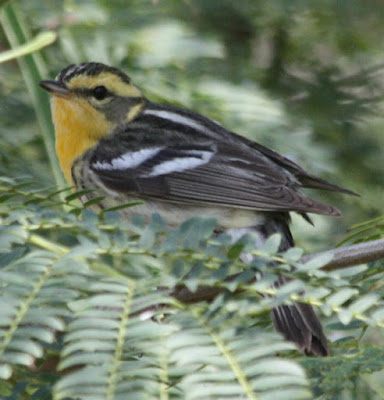 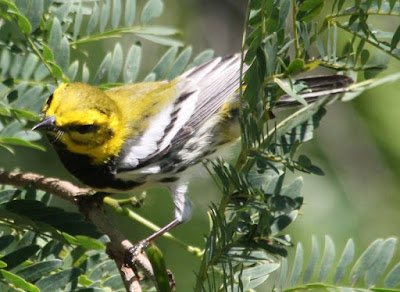 ...while a curious male Black-throated Green Warbler comes in to say hello! 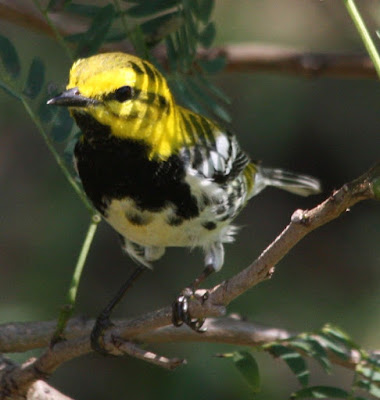 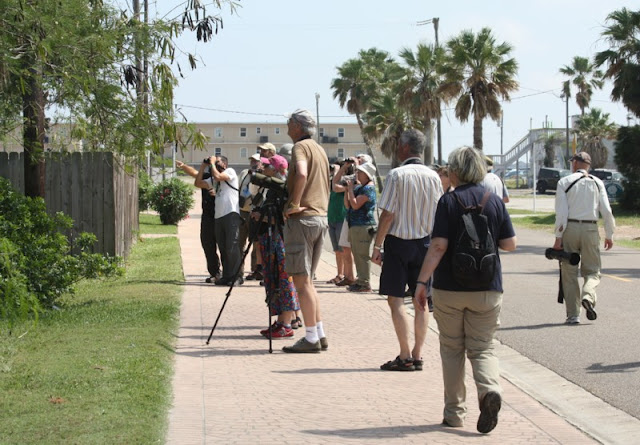 The Danes (and everyone else on that side of the Island) respond to a Cerulean Warbler Alert!
Pat and I didn’t think we’d be able to get them to leave at the appointed time, but they were ready to head home after an exciting day of migrant chasing on the coast (but not before picking up a pair of Chihuahuan Ravens along Hwy 100)!  My personal list was 110 for the day!
Posted by Alamo Inn BB Gear and Tours at 1:18 PM