When I was informed that Roger and Candice wanted a second day of guiding, I assumed it was because they wanted me to take them around the La Sal del Rey area (as I had been telling them about that as a good place for Pyrrhuloxia and other "desert" birds), but when we piled in the car that morning they announced they had already gone out there the day before, so I had to think fast!  We decided to do Estero Llano Grande to try for the becard and Pauraque (and whatever else happened to be around), and as we drove and chatted, they described having a Pyrrhuloxia pop up almost the minute they pulled onto Brushline, but the more they described their adventure, the more it became apparent that they had gone south on Brushline from FM 490, not north (into the good stuff)!  So we agreed to head back up there after finishing up Estero.


The sun hadn’t even risen by the time we got there (that’s DST for ya), so we made our way back into the Tropical Zone, keeping our ears and eyes open for the becard, which hadn’t been reported since the 15th.  We enjoyed old favorites including squabbling Couch’s Kingbirds and Golden-fronted Woodpeckers, and Doug the Bird Feeder Man pointed out a Clay-colored Thrush right out in the open!  The highlight back there however was a flock of Cedar Waxwings making the rounds!  We sat and watched the chachalacas for a bit while talking camera technical talk, and on the way out we heard a distant Beardless Tyrannulet, but he wouldn’t even play the game he played with David and Chuck – called once and that was it!


Did the requisite padding of the list at the deck and Ibis Pond, then sat at the hummer feeders for a bit hoping for a Black-chinned to come in, which he did briefly.  Then it was off to Alligator Lake, but not before getting some Purple Martin pictures at the “house”, and inadvertently flushing Roger’s life Common Ground Dove!  Upon arrival at Grebe Marsh Roger and Candace sat for awhile enjoying the Least Grebes while I went to find a better angle at which to scan the wetland.  Doing so scared a Green Kingfisher their way, which proceeded to zip up and down the canal, teasing us by landing and then taking off, only to land again!  Took a quick look at the night herons, then proceeded to the Pauraque Place, where lo and behold, one of the birds was right back at his favorite spot, sidled up to his square rock with his tail propped up on a stick!  He nonchalantly kept an eye on us while Candace happily snapped pictures!  After finding the requisite Alligator we headed over to the Camino de las Aves Trail for a chance at a Common Ground Dove photo; dipped on that, but another handsome Black-chinned Hummingbird appeared and sat trying to get a spider web off his beak! 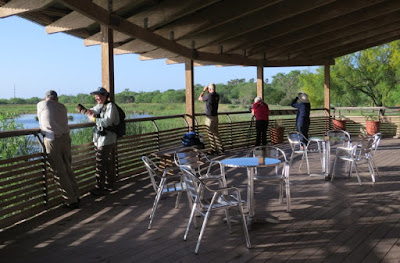 Enjoying ducks off the deck at Estero 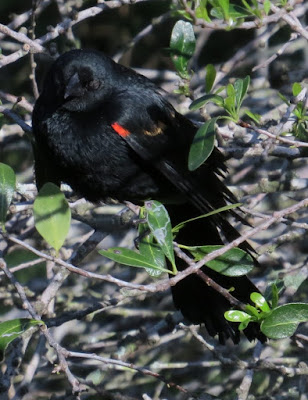 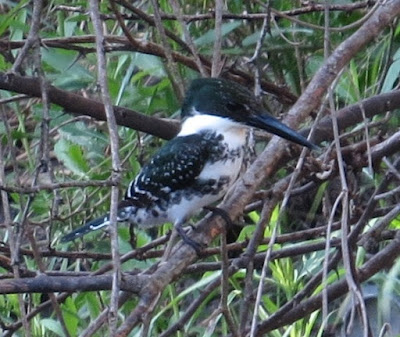 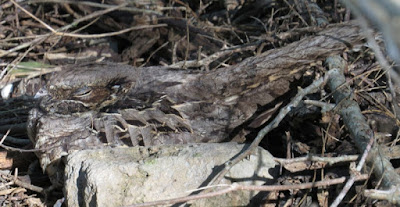 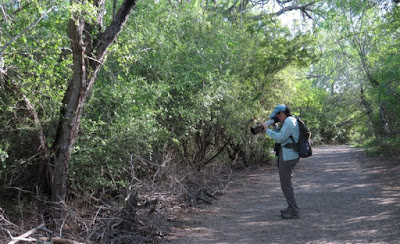 Candace getting her own shot 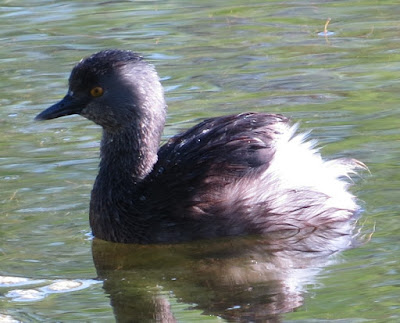 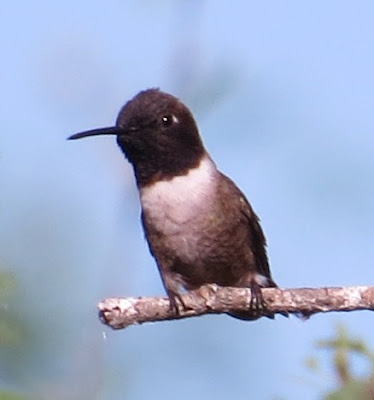 Black-chinned Hummingbird (a little fuzzy below, but a cute pose...) 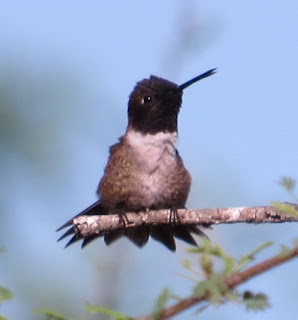 Since Snowy Plover was another target bird, we decided to try Hargill Playa first, but dipped on that while picking up a few other shorebirds (and discovering Texas Fire Ants… L).  Heading onward, we caught up with Brushline Road and headed north this time, and they both agreed this was not the road they had taken!  The wind had picked up, so that plus the fact that it was “that time of day” didn’t bode well for many birds, but we were thrilled when one of Roger’s targets, a brilliant male Lesser Goldfinch, flitted out to the side of the road to feed on a seeding plant, followed shortly by his mate!  North of SR 186 we did pick up a plucky Bewick’s Wren singing right outside the car, along with a Scissor-tailed Flycatcher that was close enough to touch!

Roger scans for a Snowy Plover at Hargill Playa while Candace beats the bushes... 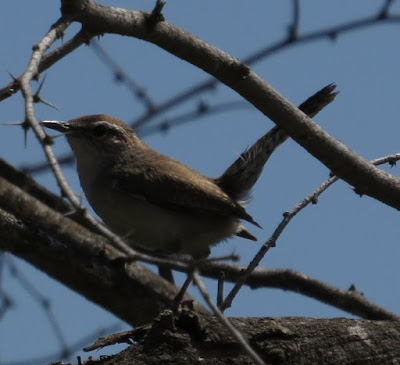 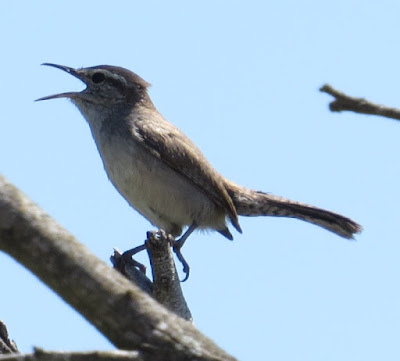 We reached the parking area for the actual Salt Lake, and Roger was determined to get that Snowy Plover, so he made a beeline for the overlook while Candace and I followed at a slower pace, enjoying "girl talk"! J  By the time we caught up with Roger he thought he had found his birds, but he wanted confirmation!  So he got the scope on ‘em, and there were two little Snowy Plovers on the beach, just as cute as could be!  And they were the only things out there (besides a singing Cactus Wren, but I think he went ignored…)!  But it was worth the walk! 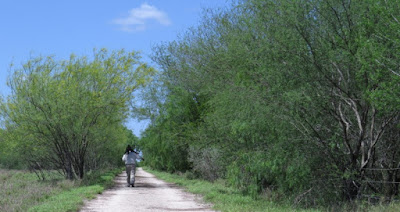 Snowy Plover pair (the cute look above, the philosophical look below...) 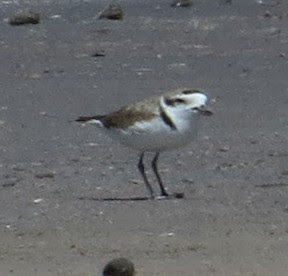 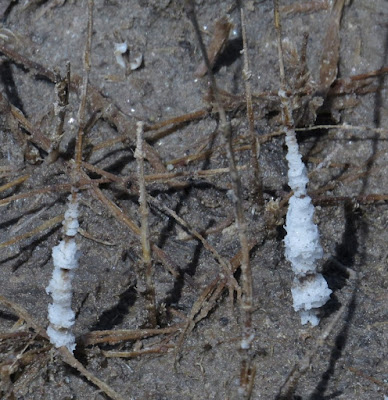 Salt crystals on the stems!

Continuing on, I was surprised and disappointed that we dipped on White-tailed Hawk of all things, but we did see a nice pair of Harris’, several Caracaras, a couple of Roadrunners, a pair of Curve-billed Thrashers by the side of the road, and even a pair of Greater Rheas behind the fence!  J  We checked out the pond at the end of Brushline and only picked up a few ducks and a White Ibis, so heading back to Ken Baker Road, I asked if they needed Brewer’s Blackbird, which they did, so we wheeled into the Rio Beef Feedyard, asked the nice lady in the office if we could come in to look for said blackbirds, and within the space of a few minutes had some nice males feeding right outside the car!  Some male Bronzed Cowbirds weren’t too shabby, either…  We checked the pond there in the “barren field” (which was no longer barren) that had several Black-bellied Whistling Ducks, but no Fulvous yet. 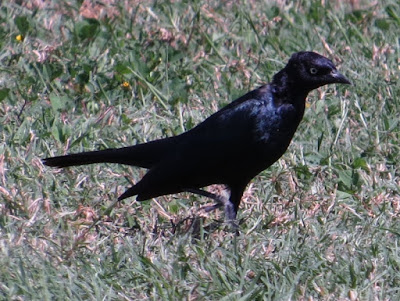 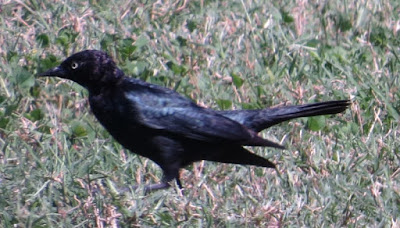 As we continued east, I pointed out the “dicey” road that continued to the La Sal Viejas tracts, so since Roger was driving the Hyundai SUV, he said, “Let’s do it!” and almost immediately we had a couple of tom Turkeys next to the road!  Continuing to the southbound road, I warned him that the wetland was dry as a bone the last time I had been out, but there not only was substantial water in that wetland, but the fields we drove by had several large “ponds”!  Candace then relayed that someone had mentioned to them that it rained like crazy over the weekend there in Willacy County, so that made sense; even the famous CR 20 Wetland that was dry last time I was out there was filled up, and that’s where we hit the “gold” in the form of eight American Golden Plovers! 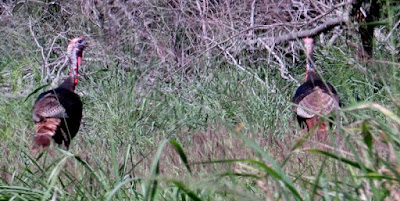 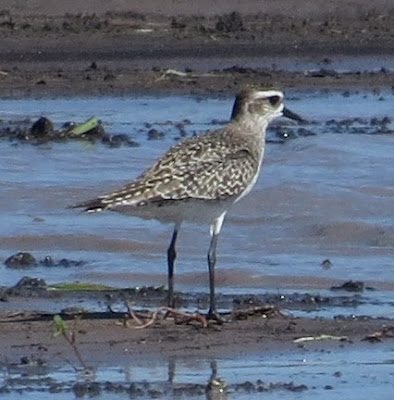 American Golden Plover (above and below) 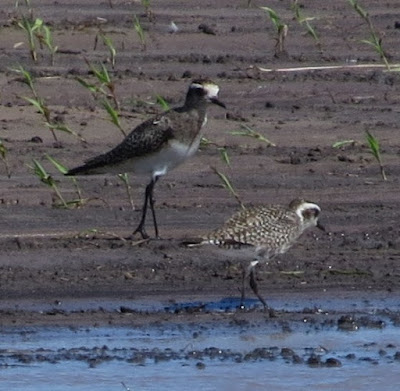 It was time to head home after that, with a respectable 83 species for the day!  Bird List: