Return of the Two Brothers

Marvin and David (aka "Manny and Danny" in last year's post) were two brothers I guided last year, and they were back for more – David for a crack at a handful of life birds, and Marvin to try and bag that obstinate Hook-billed Kite!  They had decided ahead of time that they wanted to go to Starr County, as one of David’s targets was the Red-billed Pigeon, so after our success with Chuck and Dave (plus a very encouraging report from David Sarkozi), I suggested heading straight to Falcon County Park.


Just before entering the park, I stopped to get my camera out of the back, when one of the brothers said, “Is that it on the tree???”  Sure enough, we hadn’t even gone through the front gate and a big, beautiful, maroon-colored Red-billed Pigeon was teed up in perfect light!  There were actually four of them in there, but unfortunately a couple who were innocently taking their morning walk flushed them, but at least David had gotten a killer look!  We went on in, figuring there might be more, and enjoyed a brilliant Vermillion Flycatcher in the morning sun and several Lark Sparrows singing and flitting around.  We were hugging that central “island” and delighting in a White-eyed Vireo bouncing around, when lo and behold the four pigeons suddenly came wheeling right overhead, heading towards the north side of the park!  We hightailed it over, trying to find where they settled, when not only the original four flew back over us, but another four or five birds flew in the other direction!  One foursome landed in a tree where we got more crippling views through the scope, and when yet another group flew over and landed on the wires of all things, we couldn’t believe it:  in all we counted at least 11 birds (but EBird would only take 10… J)! 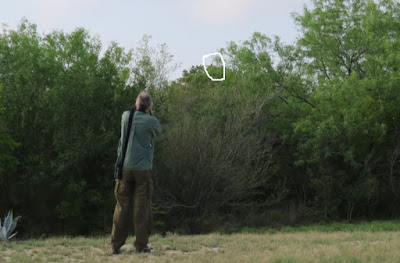 David getting crippling views of his life Red-billed Pigeon (circled)!

Two of the four pigeons that were sitting in the same tree!

They don't know that they're not supposed to act like city pigeons... J 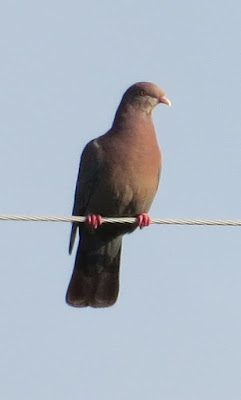 I think we actually ended up driving away from them (i.e., they stayed put while we moved on), and as we made the circle around the park just to see what else we would pick up, a Cassin’s Sparrow sang his ethereal song along the north side, a pair of Ash-throated Flycatchers flopped around near the camp host’s place, and a pretty Merlin posed on the south side while a Chihuahuan Raven glided past!  Finishing up there, we headed on towards Salineño via the “Dump Road”, which turned out to be quite productive; while the angle of the light wasn’t the best, we managed to pick up several “desert” birds including Caracara, Pyrrhuloxia, Black-throated Sparrow, Cactus Wren, and best of all, an annoyed Black-tailed Gnatcatcher! 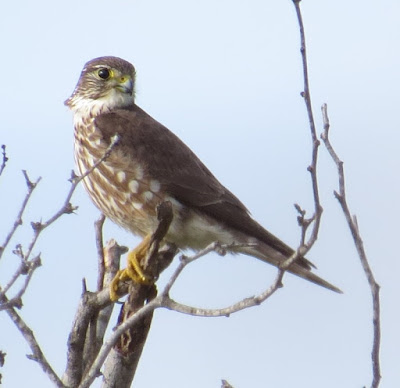 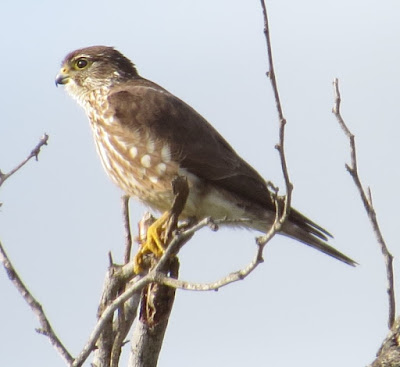 The guys opted to sit at the feeders first, so after parking and heading in, Merle stopped us:  the Audubon’s Oriole was right there!  How often do you walk up and have the star attraction be the official greeter?! J  The Altamira came in about the same time and posed beautifully, and then Merle showed us their special resident:  a “McCall’s” Screech Owl!  We sat around a little enjoying the regulars for awhile, then headed down to the river for an hour’s watch. 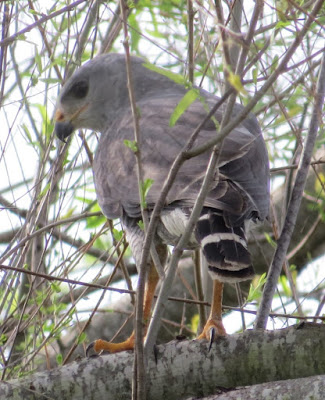 Gray Hawk on the way down to the boat ramp 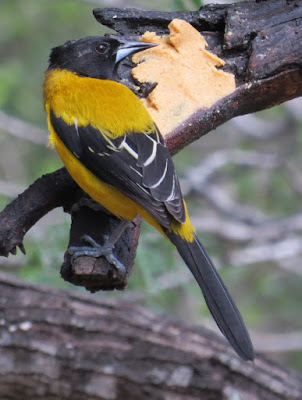 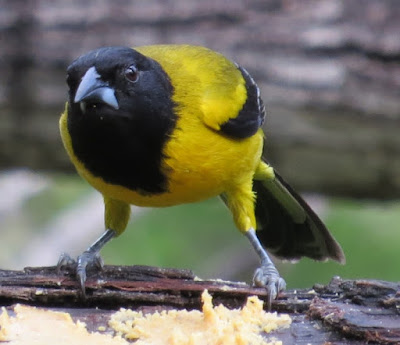 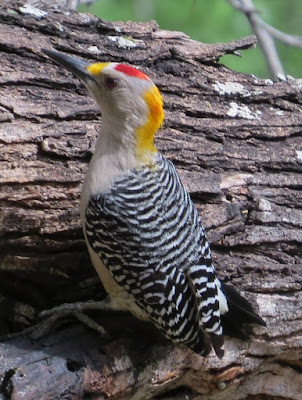 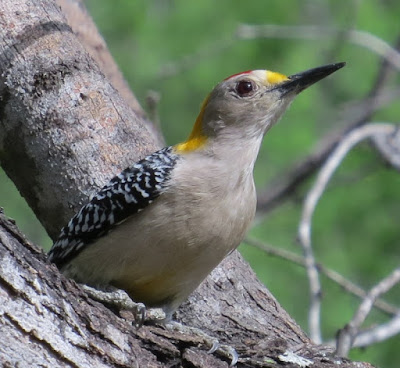 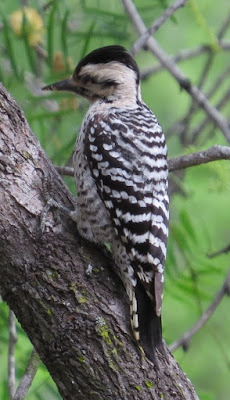 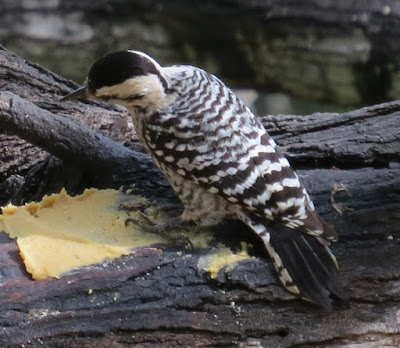 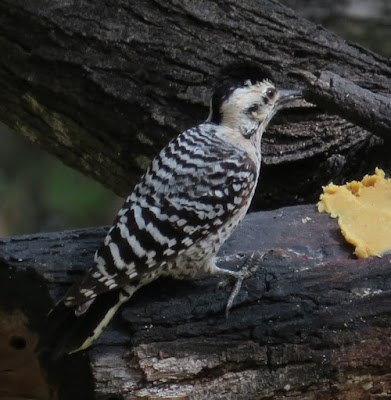 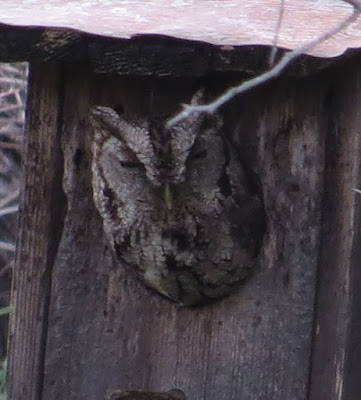 We all dug out our lunches and pulled up our chairs to wait and see what would come down the river at us; we were hoping for Muscovy Duck (another lifer for David), but the most exciting thing was a pair of Gray Hawks whistling and flying around, along with “the other David’s” young White-tailed Hawk that had finally decided to fly over to the American side! J  The only ducks that graced us were several Gadwall and at least one “Mexican” Duck that flew by, but nothing else more exotic than cormorants, Ospreys, Great Blue Herons, and Spotted Sandpipers.  Other birders came and went, sharing some incredible “small world” stories! 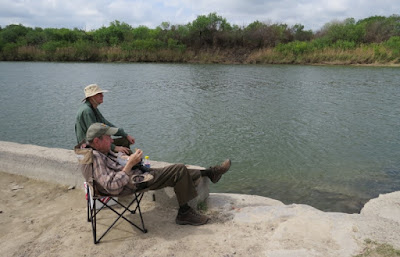 Chilling on the Rio Grande

The guys’ internal timers were great, because at just about the hour’s end David got antsy and wanted to hike the trail in hopes of seedeater (another lifer); I had my doubts based on the tries and failures of not only myself but multiple other groups going back there over the last several weeks, but it was worth a shot.  Marvin kept watch at the river while David and I headed on the trail, and we shot the breeze more than we looked for birds (we did get a glimpse of an Olive Sparrow, and David called a Scissor-tailed Flycatcher with a shortish tail that I had ignored as just another Mocker), but after spending a couple of minutes at the cul-de-sac with “crickets chirping”, we headed on back, gabbing some more, when a little song made its way through my skull:  Wheedie-wheedie-wheedie-chewchew!  No way!  We headed back (thankfully David could hear it, too), and by golly, that seedeater was singing from the cane on the island!  With a little pishing he came right to the top, a lovely black-and-white adult male (unlike the subadults we had been seeing last year)!  Unfortunately my camera decided to focus on the Mexican side of the river L, so no proof of the pudding this time…


We got back to the car and shared the good news with Marvin (he had already seen seedeaters, so he wasn’t jealous J), then decided to start back and stop at Anzalduas on the way, seeing as a Hook-billed Kite had been reported there (although we all knew seeing another one was problematic) and it was also a somewhat promising spot for Tropical Kingbird, another target for David.  On the way in we ran into Chris Benesh leading a tour, so after “happy hi’s” we went our separate ways, promising to text each other of something good popped up!  At my first traditional stop by the river we only picked up Coots (until the Gull-billed Tern flew by), then slowly crawled around, not seeing much of anything due to the many picnicking families (Spring Break in full swing, someone quipped).  When we crossed paths with Chris and crew again, he mentioned they had had an Eastern Bluebird teed up near the maintenance shack, so we swung by there, and there was Mr. Bluebird in all his glory, being harassed by a Couch’s Kingbird! 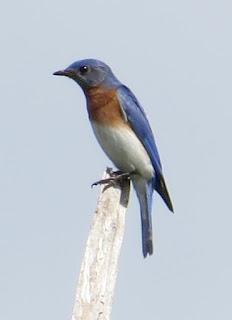 
So after discussing other options on the way home, David said that even the name “Old Hidalgo Pumphouse” sounded intriguing, so we headed over there (although Monk Parakeet was not on their wish list).  We pulled into the parking lot where we saw that Chris had beat us there (and we engaged in the requisite teasing about following each other J), then headed towards the overlook.  Just as we were approaching David stopped us:  there was a Muscovy Duck sitting on the railing of the deck down below!  Figuring it was probably a feral bird (the conventional wisdom was that any Muscovy seen away from the river in Starr County was feral, and even the “good” ones were suspect if they showed any red wattling in the face), we took a look, but got our hopes up when this one seemed to show no red on the face at all!  I texted Chris and told him that we might have a “real” Muscovy on our hands, so his whole group shortly showed up, but I don’t think anyone was brave enough to declare it a truly “wild” bird (I gave David permission to count it if he wanted J), when suddenly a second bird was spotted, this one obviously bigger and with more wattling on the face (with some red, unfortunately)!  The smaller, more “wild” looking one suddenly got skittish and took off when a young couple rode up on their bikes, but the bigger, more “domestic” looking of the two stayed put.  But both had the classic glossy black plumage with white shoulder patches, and not a hint of “domestic white” anywhere else, so I can only imagine the conversations when Chris’ group did the checklist that night! J  After posting the pictures on Facebook, Bryan Calk, a local birder, mentioned that those Muscovies had been there for awhile, and no one seemed to be making a fuss over them, so who knows…with the big feral population in Brownsville, it may be only a matter of time before, like the House Finches of the east, the two populations meet up, and then who knows what will be legit!  I suppose Texas could always follow in Florida’s steps and allow the feral populations to be “countable”… 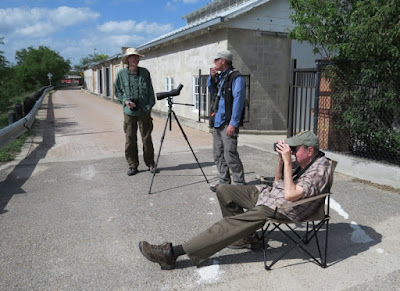 David and Chris discuss the "countability" of the pair of Muscovy Ducks that Marvin is intently watching... 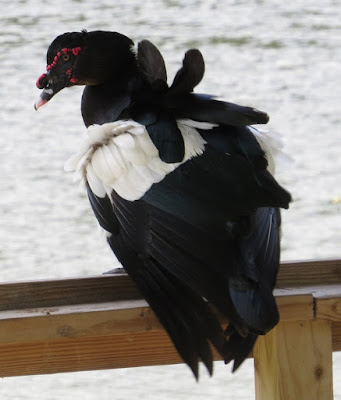 The larger of the two Muscovies shows more wattling and a little more red than the smaller, more "wild-looking" one, but both show the plumage of a wild Muscovy Duck. 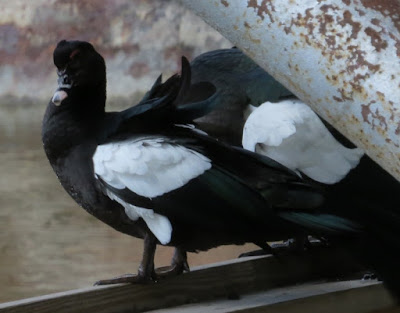 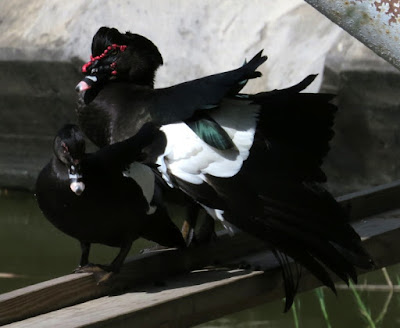 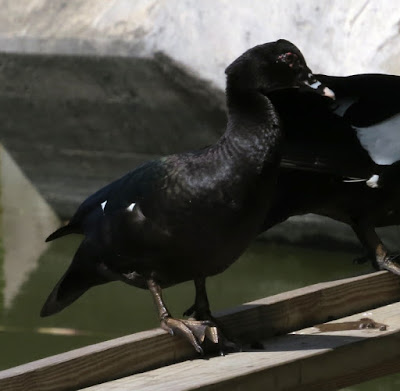 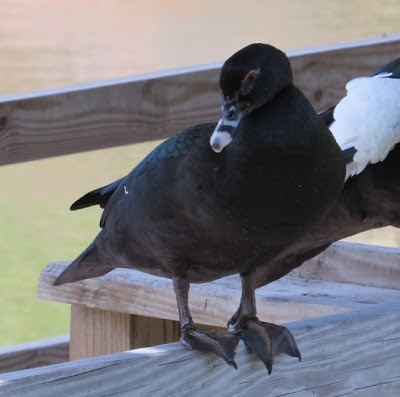 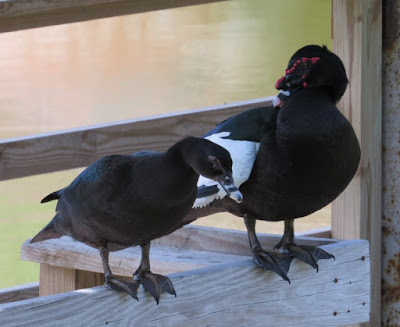 We headed home after that, disappointed that we had dipped on the Tropical Kingbird but not at all unhappy with the day!  We even cruised around Alamo as I would often get them on my morning bird surveys, but it wasn’t to be.  After showing the guys the “strip park” where the kingbirds often show up, I dropped them off, then got the good news later that evening:  they had gone out to sit and relax at that park for awhile, and the birds cooperated!  Just wish we coulda bagged that kite for Marvin – wasn’t fair that his brother got all the breaks! J

[Update:  they headed over to Santa Ana NWR on Saturday and got their kite! J]