A Tale of Two Hoosiers, Part 2


Jury duty precluded me from taking Chuck and David out on Tuesday, so after a very successful day in Cameron County with Michael Marsden (they got the Aplomado Falcon right off the bat, so everything after that is always gravy J), we headed up to Starr County to try and bag some of those specialties.  It was to be the start of the Big Bad Front that was to blanket the Valley for the next several days, and as we arrived at the Salineño boat ramp, it was indeed spitting, but that didn’t stop Chuck from donning his mauve umbrella and joining another couple at the ramp to look for Red-billed Pigeons and Muscovy Ducks!  Unfortunately the pigeons had been seen earlier (and in fact Chuck thought he saw a couple fly over, but I didn’t get a good enough look), but an Osprey claimed a big stump mid-river in the rain, and the Spotted Sandpiper was still hanging around.  A nice policeman who was guarding the area came over and offered to take our picture, and we all gave him a briefing on the importance of this little corner of the Rio Grande to Valley birding and tourism!  We encouraged him to check out the feeders, and he sounded intrigued!

Chuck schmoozes with another birding couple already at the boat ramp 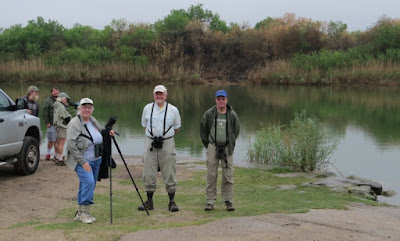 A friendly cop insists on taking our picture!

It was too wet to hike the trail, so we decided to raid Merle and Lois’ joint (aka The Feeders), where everyone was squished up under the awning in order to stay dry! J  It was rather quiet to start, but we were determined to get that Audubon’s Oriole for David (I had heard the bird earlier)!  People came and went, and even the policeman came up for a visit, and one of the birders who had really sold him on the idea was pointing out all the birds:  first the Kiskadee would sound the “all clear”, and before long sopped Green Jays would bounce in, along with Cardinals and even a Long-billed Thrasher and Olive Sparrow!  Finally the Altamiras started coming, and before long Lois heard the distinctive whistle of the Audubon’s – there he was, up in the tree!  He shortly came in to the PB mixture (he had been dubbed “Baldy” as he had lost some head feathers the year before and they apparently never grew back), so David was able to get a wonderful look! 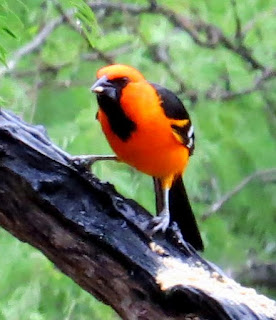 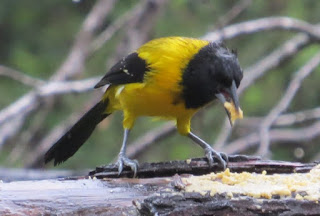 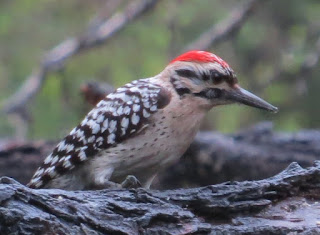 
After that we took up river watch again, wherein I parked so that we could scan from inside the car if it got too wet outside.  The Osprey hadn’t moved, but a dark raptor over in Mexico (that had been initially ID’d as a Turkey Vulture earlier) had shifted positions, so a look through David’s scope revealed it to be an immature White-tailed Hawk!  That was a lifer, but on the wrong side of the river, unfortunately, so he’d have to wait for that one.


After awhile we decided to cruise around Falcon State Park as the rain kept coming.  (We were warned not to take the Dump Road, as someone had apparently dug some pretty good ruts…)  David spotted a bird on the fence coming in that turned out to be an Ash-throated Flycatcher making his little pit-pert call – an unexpected lifer!  (I thought it was early, but EBird liked it…) A Cassin’s Sparrow was also singing on the way in, so we stopped long enough for Chuck to hear it sing so he could add it to his year list! J  The only real target bird we could pick up here for David was Scaled Quail, so after making the loop and not seeing anything besides a Roadrunner, we decided to check out Falcon County Park next door, where we ran into this other couple who told us that they had just seen the pigeons!  So we thanked them and made the rounds ourselves, adding Vermilion Flycatcher and a singing House Finch to the list, but we were just about to give up hope when David spotted one in one of the coma trees!  It flew to a dead tree, so we headed up that road, where it then flew to another coma tree even closer to us!  What a look!  He ate a couple of berries before taking off (they’ve always been very skittish), and we left as happy campers! 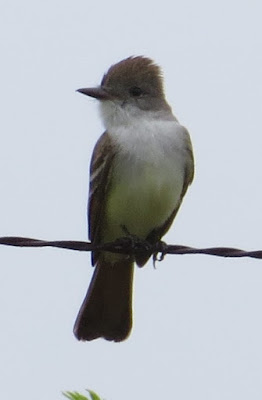 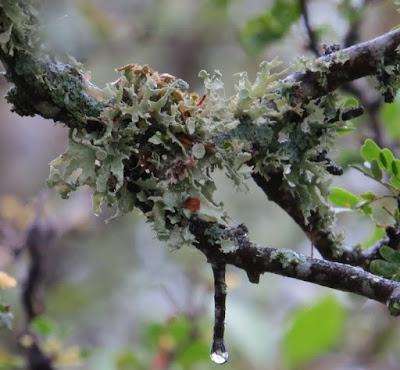 Lichen on the trees 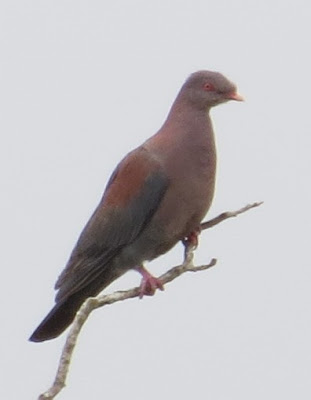 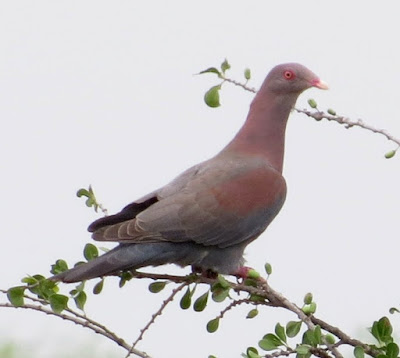 ...then over to a Coma Tree where he can get his berries! 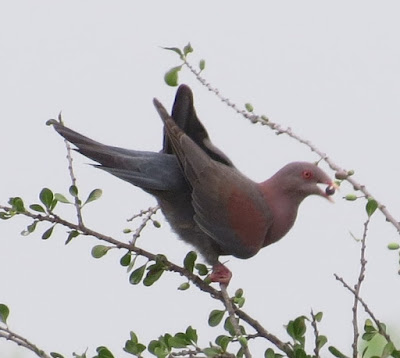 We then discussed seedeater options:  rather than drive all the way up to Zapata, we decided to try the Salineño Trail (if it wasn’t raining), and then check out Roma Bluffs, as they had been reported there.  Chuck opted to sit that one out and river watch instead (the Osprey still hadn’t moved), so David and I headed down.  No seedeaters, but at the cul-de-sac we did have a marvelous look at a couple of Gray Hawks (one flying and one in the tree), and heard a Red-shouldered Hawk to add to the list.  We kicked up another pair of Olive Sparrows, and back at the car, a nice Scissor-tailed Flycatcher drifted by just before we left! 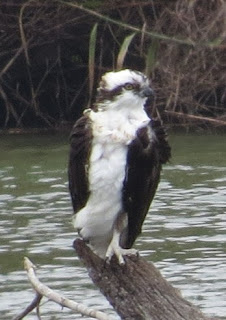 Immovable Osprey at the river


We headed to Roma Bluffs after that, where there was a huge flock of Cliff Swallows wheeling overhead, but we couldn’t pick out a Cave amongst them.  A nice Border Patrol guy pointed us to a “safer” access to the trail down below the overlook where people had been seeing the seedeaters before:  there was a trail there up at the top, but it went down some stairs that he said could be slippery, so he had us take the street past the VC, make a right, and then another right on this gravel road that went right down to that trail (which is actually a Border Patrol access road, I think).  But it was okay to park there, so we found a shady spot where Chuck could chill (yes, the sun had come out by then) and schmooze with the BP guys who were on watch there.  David and I checked out the trail in both directions as far as we could go, and there is indeed a lot of cane, but we neither heard nor saw any seedeaters (nor much of anything else, really), but it was a beautiful trail with tall tepeguaje trees (and other species, I’m sure).

View of the Rio Grande from the Roma Bluffs overlook 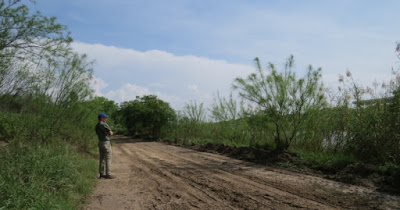 The River Trail, where White-collared Seedeaters had been reported 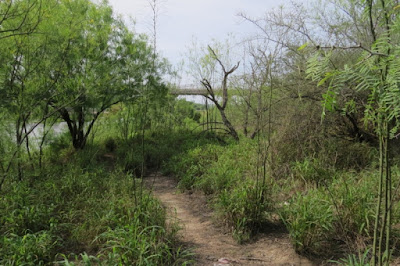 At the east end of the road, an actual trail goes through the vegetation (you can see the international bridge in the background) 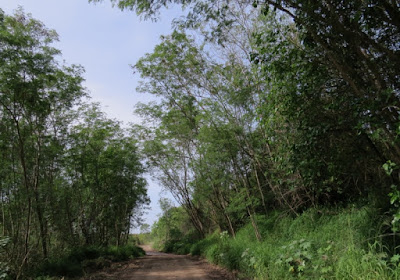 The road going west of the bridge 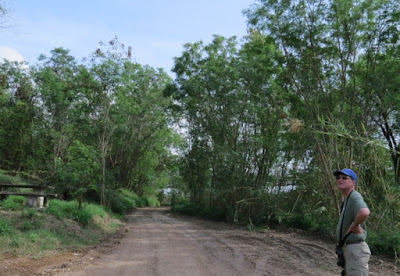 Looking east towards the bridge


It was time to go home after that, with a surprising 65 species for the day, considering the weather!  Bird list: