For folks who would just like some general birding and only have a day to do it, I usually give them two options:  local birding around Hidalgo County or coastal birding in Cameron County.  Roger had a combined target list of life birds and “nice to see” birds (they had visited the Valley once 15 years ago, so they already had most of our specialties), so they opted for Cameron County, and since Candace was a photographer, South Padre was the logical first stop (especially during Spring Break – wanna get there before they wake up J)!


Roger opted to drive since they had rented a nice Hyundai SUV, so we headed out, making a brief stop along SR 100 to scan for falcons.  No luck there, but we added singing Eastern Meadowlarks and a distant Bobwhite to the list, plus a flyby Chihuahuan Raven.  Once on the Island, we hit the flats first thing, and I couldn’t believe the wonderful shape they were in: not a puddle to be seen, with lots of larid flocks!  Unfortunately it was too early for the coveted Franklin’s Gull, and his target Snowy Plover was a no-show, but the larids were outstanding, especially when the skimmer flock came sailing in right next to us!  Both Royal and Sandwich Terns were in breeding dress (along with some that weren’t), and we had a nice selection of shorebirds, including Dunlin, Ruddy Turnstone, Marbled Godwit, and one of Roger’s targets:  Short-billed Dowitcher!  A fluffy white morph Reddish Egret was a big hit (surprisingly didn’t see any dark morphs), and had multiple Red-breasted Mergansers out in the surf along with a Mottled Duck, also a life bird.  A pleasant surprise was a flock of Black-bellied Whistling Ducks going overhead! 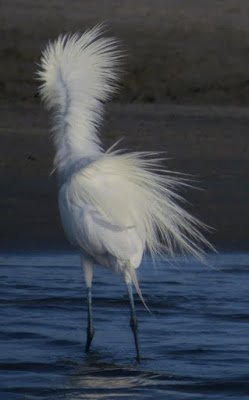 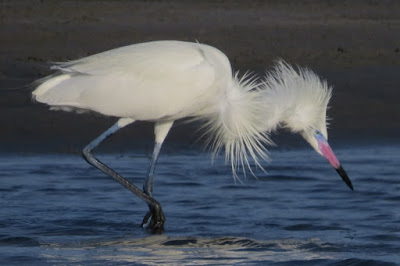 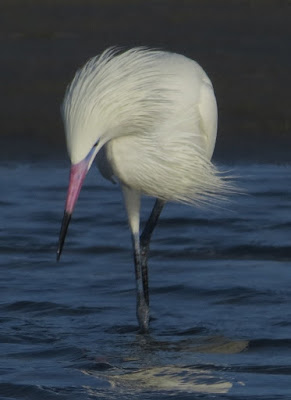 Sandwich Tern (left) with a Royal with an unusually red bill! 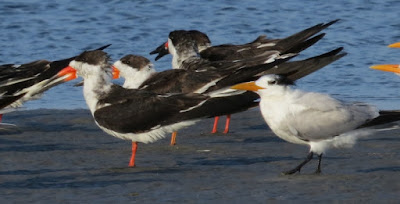 Note the Royal Tern on the left going into display mode! 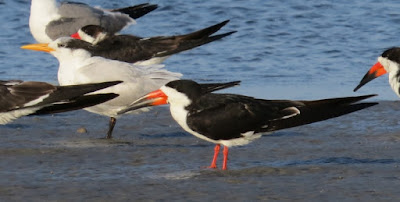 Skimmer with a particularly dull-billed Royal on the left 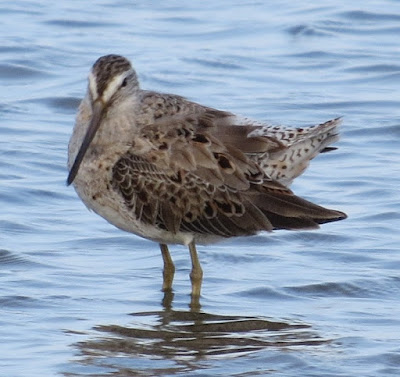 Short-billed Dowitcher showing off his tail

Heading over to the Convention Centre, things seemed quiet at first in the songbird department, but after making a fruitless search out back for Sedge Wrens (but enjoying a Brown Pelican fishing in shallow water), we returned to discover that another couple had just seen a Yellow-throated Vireo!  Said bird suddenly appeared, but unfortunately disappeared before Roger could get a look… L  However, a Northern Parula put on a show, which was also a life bird, so that made up for it!  A “Myrtle” Warbler was starting to acquire his breeding colors, and a nice male Hooded Oriole showed up as the dessert! 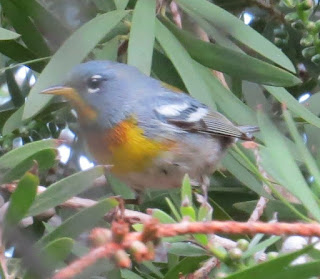 Fuzzy Northern Parula that Candace tries to get on "film" (below) 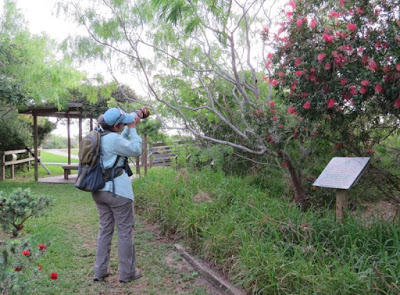 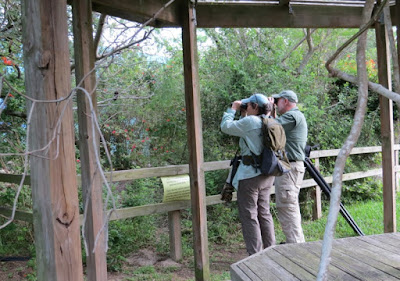 Searching vainly for that Yellow-throated Vireo...

We headed out onto the boardwalk after that, getting in-the-sun views of spoonbills and a few Redheads, but the Common Gallinules were really being showoffs this day!  The wintering Belted Kingfisher hovered here and there, and heading towards the “marsh” blind, another wish came true:  a Least Bittern flew across the pond and into the reeds on the opposite side!  We almost missed the male that was on our side, practically within touching distance, and slowly creeping through the reeds!  He eventually made his way down about four yards where he started up his clucking song (his mate had given us the loud cack-cack-cack call earlier)!  Even seeing a Green Heron and one of the resident Alligators didn’t top that!  On the way back the other couple pointed out a pair of Soras right out in the open, and the Marsh Wren they had seen earlier but weren’t sure about started singing, so that clinched it for them!  We checked out the other boardwalk through the mangroves, but for the second time in my recollection we didn’t even hear a Clapper Rail!  There was some kind of waterthrush in there, though, and at the end was a pod of Pied-billed Grebes and a Great Blue Heron eyeballing the big fish in the shallows. 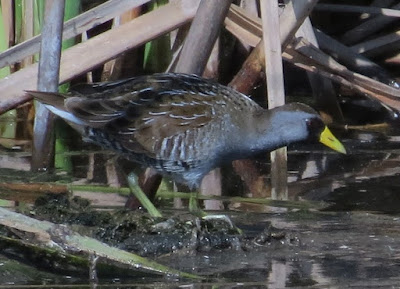 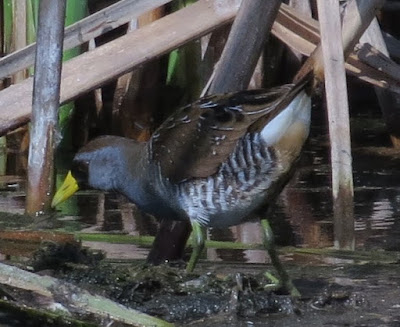 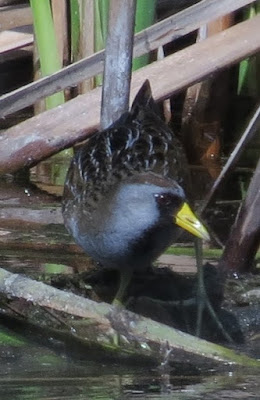 Wrapping that up we decided to skip the Birding Center and head up to Laguna Atascosa, as my friend Joyce had reported seeing Aplomado Falcon along Buena Vista Road (I had yet to see one there, although I know they do occur).  On the way we were entertained by a big Osprey on a wire eyeing a flock of White Ibis below him in a residential neighborhood, then stopped at Port Isabel Reservoir and hit the shorebird jackpot:  there was a huge flock of Long-billed Dowitchers and Stilt Sandpipers (both lifers for Roger), along with a handful of Wilson’s Phalaropes, including a gorgeous female!  Around the corner we encountered a mass of Avocets all huddled in the middle, along with various ducks and a distant pair of Gull-billed Terns, also a life bird!

Stilt Sandpipers (the smaller, grayer birds) often like to hang with Long-billed Dowitchers! 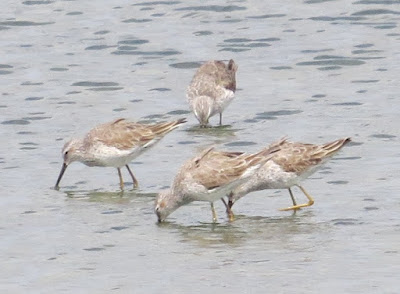 
Michael Marsden had mentioned that he often goes down Holly Beach Road (the road the reservoir is on), so we decided to explore and head down, and it really was a very good dirt road through nice thornscrub habitat!  We picked up a Black Vulture on a pole, and at the end of the road we scared up an Oystercatcher and a Curve-billed Thrasher that posed on a yucca spike.  The Bewick’s Wren was most uncooperative…


Headed up Buena Vista Road as planned, and I wasn’t too surprised not to get the falcon, but we did have what I thought was a White-tailed Hawk at first, which morphed into an Osprey with a very pale tail indeed!  While that was going on Candace was trying to get my attention regarding what she thought was a Kiskadee at first right next to the road, but turned out to be their life Couch’s Kingbird!  Unfortunately it flew before she could get (what would have been) the perfect shot, and landed up on the wire in the sun (naturally).


At the Visitor’s Center we enjoyed the Green Jays and Chachalacas coming in to the blind when the docent walked in and told us that the Altamira Oriole often came in to the feeding area in the garden across the parking lot, especially when the volunteers put out the food for the 2:00 bird walk! J  We headed over and waited, and although the volunteers hadn’t shown up yet, that oriole came in right on time for close-enough-to-touch views!  We made a loop around Kiskadee Trail after that, the most interesting thing being the algae-covered Alligator in that little concrete pool (complete with a stick across his head J) with a couple of Leopard Frogs as company!  On the way out we scared up a nice Long-billed Curlew, and while inspecting a raptor-turned-transformer a Ladder-backed Woodpecker bounced towards us and landed in the tree right next to the car! 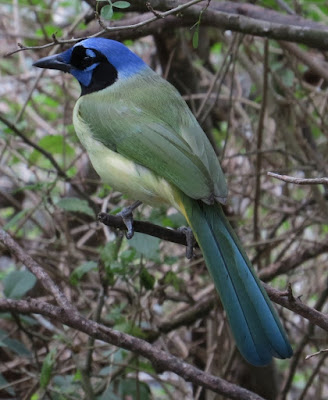 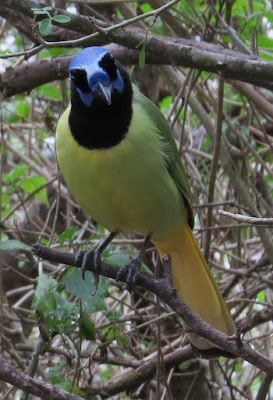 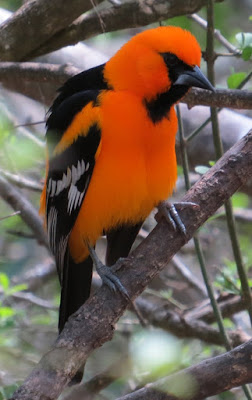 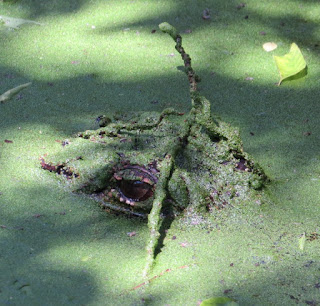 Alligator trying to be invisible... 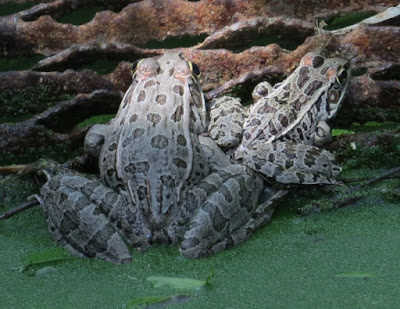 Leopard Frogs oblivious to the Alligator...

With what little time we had left I suggested making a run for Hugh Ramsey Park in Harlingen, where we had a chance at some additional things they were looking for.  We spent a few minutes at the first blind which was hosting mostly House Sparrows and Mourning Doves, then hiked around, getting a good but brief look at an Olive Sparrow that actually responded to pishing!  The Lesser Goldfinch was stubborn, however, and things were really quieting down.  I sent them to the next trail over from the parking lot while I hit the restroom, then found them at another feeder area!  They were happy campers as they had bagged Golden-fronted Woodpecker (we had seen them on Holly Beach Road but none allowed photographs), Long-billed Thrasher, and as we were leaving, a very cooperative Buff-bellied Hummingbird!  Definitely the cherry on top of the “sundae” of great birding, with 100 species on the nose!