Quest for the Green Kingfisher

Katchy and Porter were a dear senior couple from Boerne who were mainly interested in general Valley birding (he was born and raised in Harlingen and had seen pretty much everything already, but she was from Kerrville and a relatively new birder), but before they arrived Katchy contacted me and said, “Oh, yes – there’s one bird Porter would really like to see:  the Green Kingfisher!”  So since Estero Llano Grande SP had been pretty productive the last several times (and we were in for another scorcher with highs getting into the 90s), we opted to go there first.  As usual, we headed towards Pauraque Hall in the Tropical Zone and enjoyed the feeding frenzy of Chachalacas and White-tipped Doves, but this time the becard was a no-show.  We heard the tyrannulet, but just couldn’t pin him down.  The Buff-bellied Hummingbird showed well at one of the feeders on the middle road, however, and a Clay-colored Thrush came in and perched on the tippy top of a dead tree, giving great views!  The Couch’s Kingbird wasn’t as cooperative … 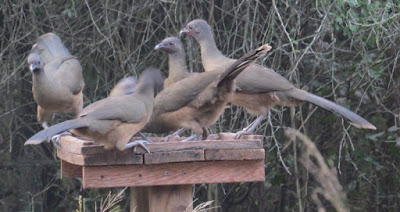 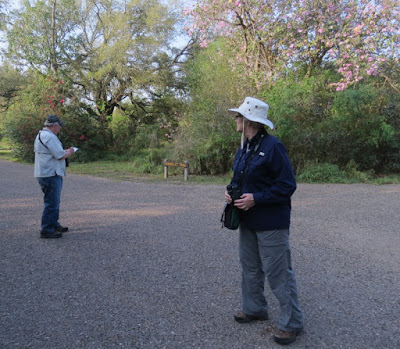 Porter makes note of the Tyrannulet Trail where we couldn't find its namesake...

Padding the list with ducks on deck, we then sat at the hummingbird feeders for about 15 minutes, watching the Redwings run the show (along with a single Curve-billed Thrasher).  We then headed out to Alligator Lake where the Spotted Sandpiper was still glued to his log on Dowitcher Pond, and the monster Alligator at Grebe Marsh entertained everyone while the Least Grebes trumpeted at him!  Turning the corner, the trees were full of the “forehead spotlights” of several Yellow-crowned Night Herons!  A single subadult Blackcrown was across the way as well! 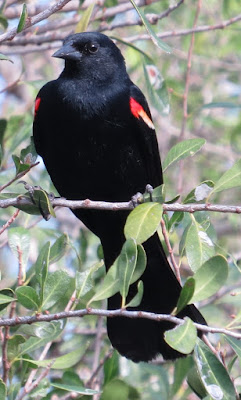 Red-winged Blackbird is king of the feeders! 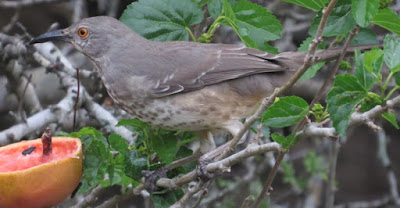 The Curve-billed Thrasher sneaks in for his cut...

The Purple Martins are back! 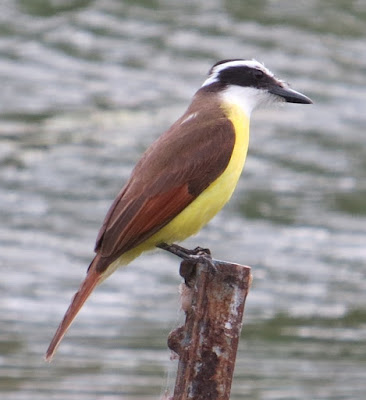 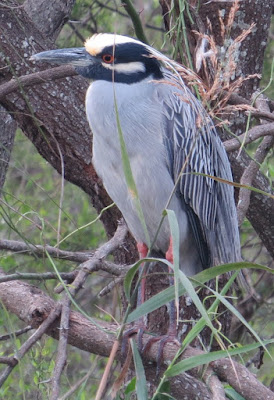 Yellow-crowned Night Heron (not quite as sleepy as last time) 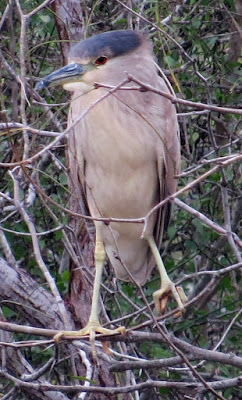 The ”camo tree” Pauraque was still in his place (he’s always under this one branch that has a “camo” pattern), and Porter took great delight in pointing him out to another couple coming by!  While I was enjoying that interchange, another couple pointed out the second Pauraque right next to me that I never saw, next to a pale rock with his tail propped up on a branch!  Someone else spotted a female Anhinga next to the Resaca, and at the main overlook a male Anhinga posed!  A White-tailed Kite was sitting on a distant wire in terrible light, but alas, no kingfishers of either type (although I did hear a distant Ringed while at Grebe Marsh).  A good look at a skulky Long-billed Thrasher was a nice consolation prize, however. 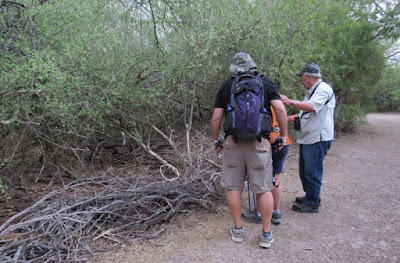 Porter points out the Pauraque (white circle) to another visiting couple 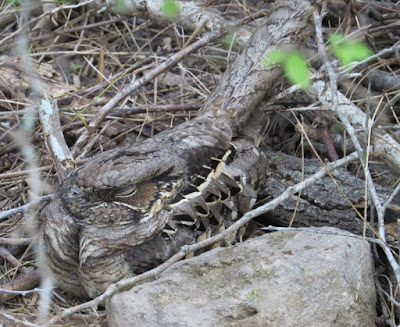 The other one is hiding in plain view! 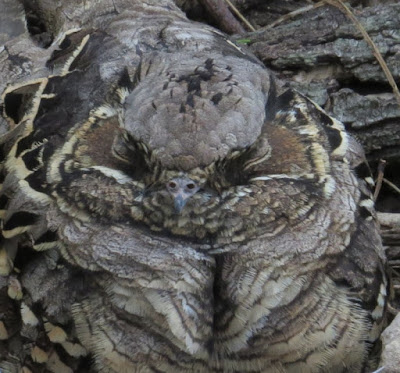 Having dipped on the Green, I recalled that they had been pretty reliable at Hugh Ramsey Park in Harlingen, so we headed out there (with Porter giving running commentary about how things had changed since the 40s)!  We first took a look at the bird blind and feeders near the parking lot, which was busy with Mourning Doves (one was missing a big chunk of neck feathers), a Common Ground Dove, Cardinals, and Green Jays.  Heading on to the little ponds, I indeed heard a Green Kingfisher, but we never could spot him, so since he sounded like he was heading down the path, we followed him down when Katchy spotted several Diamond-backed Water Snakes hauled out on the branches!  Still not able to find the kingfisher, we circled around wondering if perchance he flew into one of the other ponds, but by the time we got back to the original resaca, Phil Nelson met us with, “He was just here!” L  I was kicking myself for not simply waiting, but Katchy and Porter were ready for a break, so we headed back to the Inn with plans to meet at 3:00 for a trip up to Edinburg Scenic Wetlands for one last crack at the kingfisher! 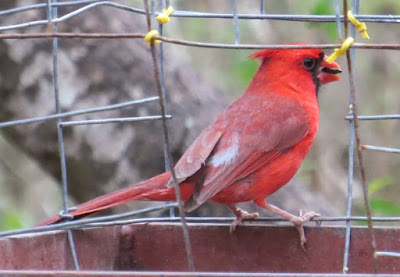 Cardinal at the blind at Hugh Ramsey 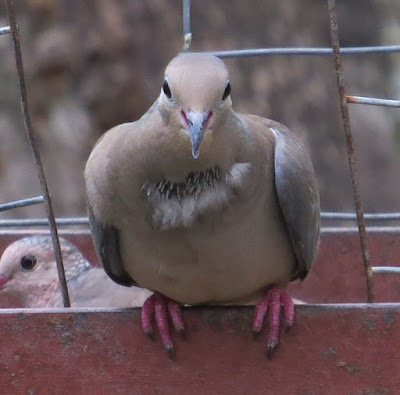 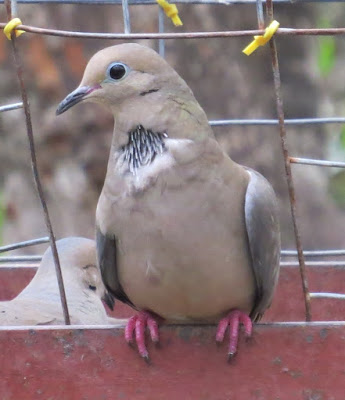 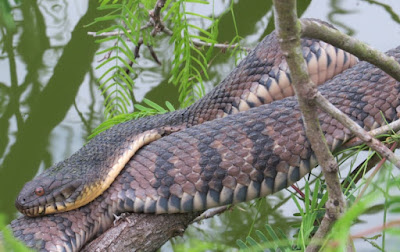 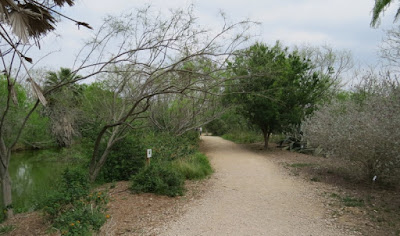 
We headed up at the appointed time, and enjoyed the wonderful gardens on the way to the Dragonfly Pond.  Heard the distinctive tic-tic, and there he was, right at the end of the boardwalk railing (that elicited a lot of “Praise the Lord”s from all parties J)!  He then flew over into the north pond, where the lighting was gorgeous, and we padded the list with three kinds of egrets, both cormorants (including a Double-crested showing his “double crests”), several herons (including a nice Green), and a Belted Kingfisher flying back and forth (and even hovering for good measure)!  Porter wanted to hang back for another shot at the Green, so Katchy and I made the circle, not seeing much else in the heat but lauding what a great place this was for butterflies and migrants in season!  After we picked up Porter we made a swing through the rest of the city park, picking up a mob of White Pelicans, a few stilts, a pair of Redheads, several Lesser Scaup, and a Ruddy Duck in the big pond (along with oodles of domestic Mallards, Pekins, Muscovies, and geese). 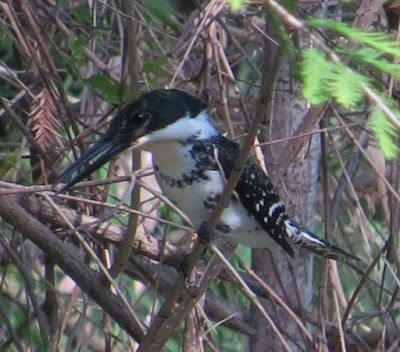 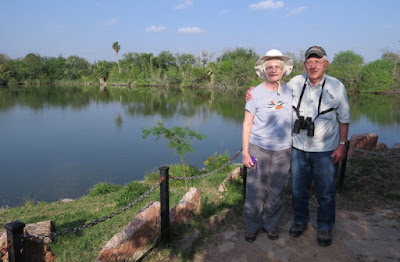 Katchy and Porter at the North Pond Overlook 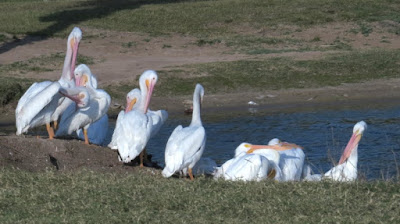 Then it was time to head down to Trenton and 10th in McAllen for the Green Parakeet show!  Sunset was around 6:30, so we were shooting to get there around 6:00, but we ended up arriving there about 5:45 and the parakeets were already there!  So since we got them so quickly, I asked them if they were interested in seeing if we could kick up any parrots along Dallas and Cynthia (as Bird’s-Eye had a whole cluster of EBird reports in that area), and away we went!  Our first cruise up Cynthia bagged the Couch’s Kingbird, and another cruise down Dallas bagged the Tropical Kingbird, but we finally hit pay dirt when we tried Cynthia again and suddenly saw a few parrots up the tree!  We parked and went back for better looks, when another birder came up, and we suddenly noticed that, along with the several Red-crowned, there were two Lilac-crowned, a Red-lored, and a Yellow-headed amongst them!  Suddenly a huge flock came in, and before we knew it, they had all taken off in a noisy bunch to parts unknown! 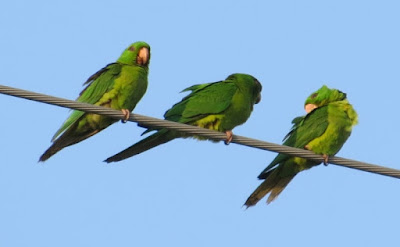 Green Parakeets at 10th and Trenton 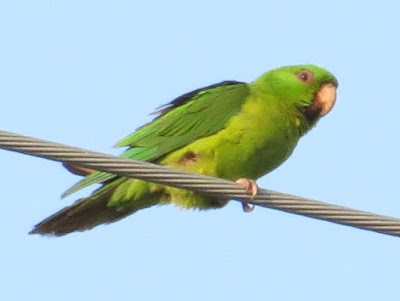 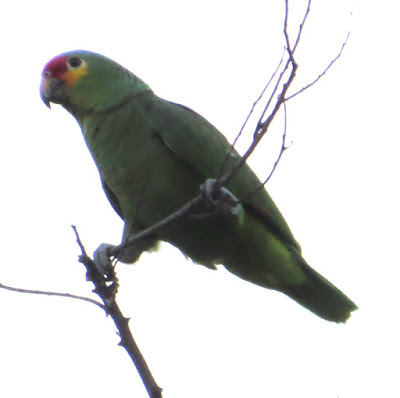 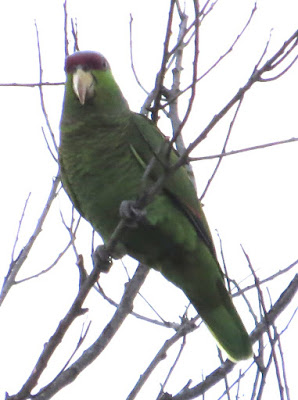