Ken agreed to a good loop hike around Santa Ana (since we were gonna hoof it out to Pintail Lakes anyway to try for the Virginia Rails), so we left just a tad early (since we were both ready to go anyway) and had the whole place to ourselves, unlike yesterday!  The wind was whipping up already, so that didn’t bode well, but we headed out, ignoring the “Killdeers” that were really the Starlings that perpetually hung out on the tower…


Once into the woods and some relative shelter, things started waking up:  Carolina Wrens, Kiskadees, White-eyed Vireos, and Blue-gray Gnatcatchers were some of the regular culprits.  Once we broke out into the open along the Pintail Lakes Trail, Ken’s first lifer of the day sailed in: a lovely White-tailed Kite who proceeded to land and give great views!  Several White Pelicans also lifted off along with a couple of Great Blue Herons.  We went around the corner and found the lake that housed the coveted Virginia Rails, and we did indeed hear at least three birds (along with a couple of Soras), but they refused to show themselves.  Marsh Wrens were also obstinate (the eastern form was one I encouraged him to “put in the bank” in the event of a split), giving only glimpses as they chased each other.  But in the big lake opposite, a more cooperative life bird flew in in the shape of four White Ibis!  We were also treated to many of the usual ducks and herons, along with several Greater Yellowlegs.  A second look at an egret revealed an immature Little Blue Heron, and we heard a distant Red-shouldered Hawk (which would have been another lifer), but alas, he was way too far away to even hope to see… 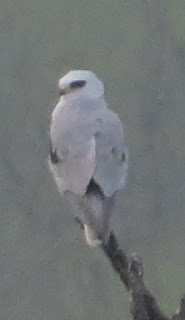 
We finally gave up on the rails and headed to the far lake where I sometimes had Ringed Kingfisher in the past, but we only heard a Green this time.  A few Black-bellied Whistling Ducks gave satisfactory views, and a single Neotropical Cormorant sat on a snag.  A big mob of shorebirds was hanging out on the south side, so we headed over there, confirming that we had several Stilt Sandpipers (another lifer) in with the dowitchers and Black-necked Stilts, with a female American Wigeon and a flyover immature White-tailed Hawk as an added bonus!

Mob of mostly Black-necked Stilts along the Pintail Lakes Trail 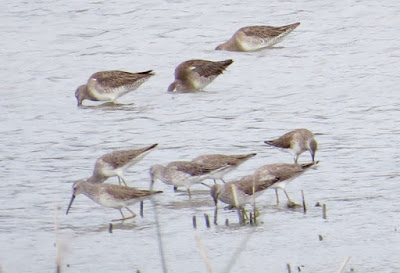 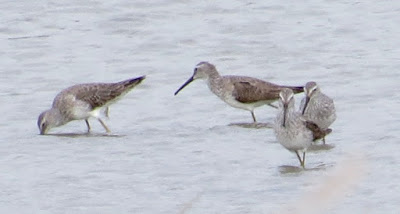 
Continuing on the Rio Grande portion of the Pintail Lakes Trail, it was a lovely walk, but pretty quiet bird-wise. A Caracara wheeled by at one of the overlooks, and a distant kingfisher had us accessing side trail after side trail until we got close enough to determine that it was a Belted!  We wound our way past the towers and towards Willow Lakes, the first of which had plenty of water but no birds.  The other lakes had the usual grebes and ducks, and along the Chachalaca Trail Ken spotted a lovely Variegated Meadowhawk.  I was hoping one of the Zebra Heliconians would show, but all we had were a few Phaon Crescents.  Miracle of miracles, another Olive Sparrow hopped up just feet away from us! 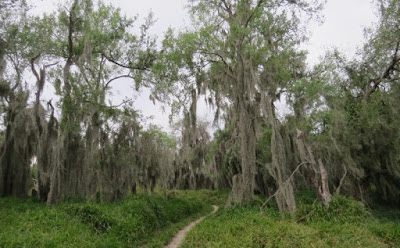 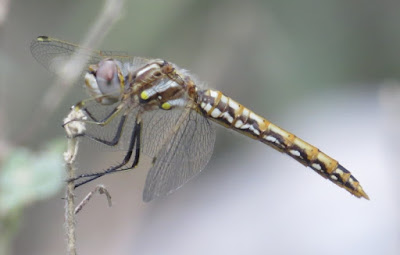 
We were whittling down the lifers pretty well, so since some of his remaining targets included “feeding flock” stuff like Blue-headed Vireo and Black-throated Green Warbler (plus we were hoping for a better look at a Clay-colored Thrush), we decided on going to Bentsen to check out the headquarters area (where a vireo had been seen recently), then check the feeders for thrushes.  The most we could kick up around headquarters were a pair of Curve-billed Thrashers and more Orange-crowned Warblers and titmice, so we headed up to the Nature Center Feeders and settled in.  We enjoyed the usual Kiskadees and Green Jays, but it didn’t take too long for a fat Clay-colored Thrush to magically appear on the tree behind the PB feeder, sitting there forever while we drank him in!  He finally went for a mouthful of PB mixture and then took off, never to be seen again…  Some funny gurgling overhead got us on some Cave Swallows (another lifer), while Ranger Roy stopped by where my comment about finding Black-throated Green Warblers led to a discussion about how hard some things are to find lately!  We migrated over to the other feeders while waiting for the tram, enjoying a mob of Chachalacas fanning their tails at each other, and had I been thinking, I should have gotten a video of these two Green Jays displaying to each other and giving each other little berries, but I was simply so entranced just watching them! J 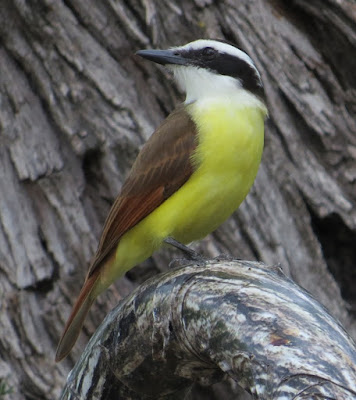 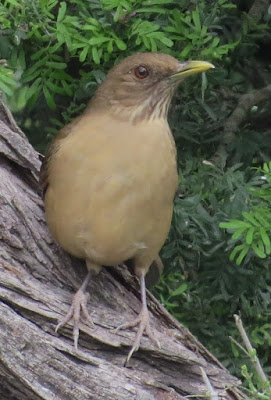 Presently the tram arrived and wheeled us down to the Resaca, which yielded no kingfisher, so we moseyed down to the Green Jay Blind, hoping that maybe, just maybe, one of the reported Indigo Buntings might come in.  They didn’t, but we (along with a young couple) were entertained by the Green Jays and Red-winged Blackbirds until a hawk broke up the party!  I noticed at one point that all four of us were resting our chins on the pull-down boards waiting for the birds to come back, so I couldn’t help but sneak a picture! J 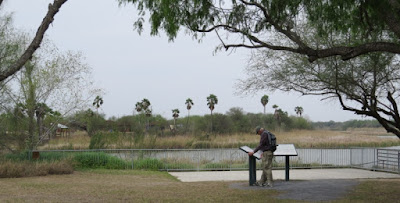 Reading about the resaca 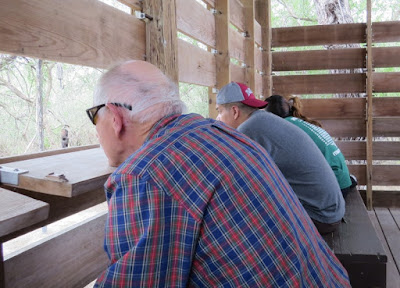 Waiting for some action at the Green Jay Blind...


We couldn’t spend much time at Kiskadee Blind if we wanted to make sure we caught the tram, so we enjoyed Mr. Cardinal coming in to his red feeder just like last time, then headed back to the tram stop at the cross walk.  There almost wasn’t enough room for four of us, as another couple was already waiting, but some of the families with young children piled into one row and we were on our way, enjoying the ride around the park while the tram driver told us little anecdotal stories, many of which involved the big flood of 2010 after Hurricane Alex dumped so much water in Mexico, which resulted in both Amistad and Falcon having to open the floodgates which in turned filled our floodway (and the Rio Grande) which put parks like Bentsen and Santa Ana under water for several months! 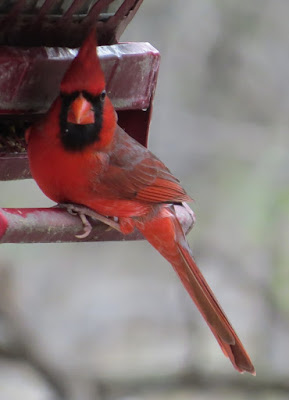 Cardinal with an attitude...

We were pretty beat by the time we got back to the car, so we decided to bird Wallace Road in hopes of kicking up some sparrows (although with the wind we kinda knew it was a false hope…).  We did see a couple of Lark Sparrows on the wires, and one saving grace was the fact that Ken was very interested in farms:  he and his family in the Midwest used to take “farm tours” to enjoy the countryside and identify the various crops, so that’s what we did along Wallace Road, and found something neither of us could figure out (so I took a picture in hopes that someone else might know what it was)!  The old Monte Cristo Tract had indeed been cleared to make way for whatever the new owners were planning on planting, but surprisingly there was still water in the wetlands after all this dry weather!  We scared up some Cinnamon Teal and enjoyed some Killdeer and Least Sandpipers who seemed oblivious to our presence, along with a group of Greater Yellowlegs down the road.  But the best bird in here popped up when I tried to pish up some Yellowthroats:  a wintering Yellow Warbler! 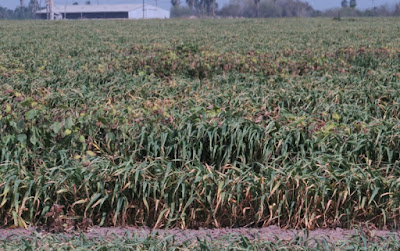 Mystery crop that was ID'd as young sugarcane by my knowledgeable friends! 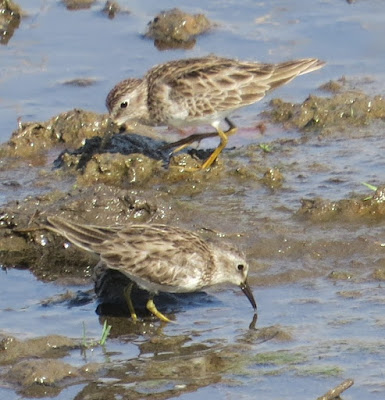 
It was time to head home after that with 82 species for the day.  Bird List: