Ken was anxious to get to Cameron County, as he had a whole pile of potential lifers that were coastal!  His MIB (Most Important Bird) was the Aplomado Falcon, so we headed out to Old Port Isabel Road first, praying the bird would be visible on what would certainly be the only drivable portion of the road after the previous day’s storm!  At our first stop the air was filled with the songs of Eastern Meadowlarks, and down the way we saw what turned out to be another birding group! J  As we approached, Ken spotted a raptor on a telephone pole to our right which was almost right in the sun; it looked pretty big and bulky so I had it written off as a Harris’ Hawk until I took a look, and I couldn’t believe it – it was his life Aplomado Falcon!  I got the scope on it, and despite the not-great lighting situation, Ken could see every field mark!  In the meantime the birding group had their sights trained on the hacking platform, and when I finally got someone’s attention I pointed to the falcon right behind them!  By the time we caught up with the group (which was a Road Scholar group this time), they were enjoying a pair of falcons that were on the platform in much better light, but their backs were to us, so Ken thought his look was superior! J 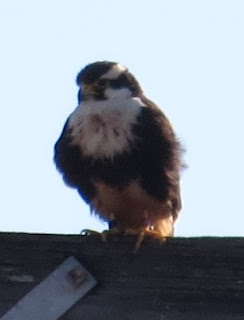 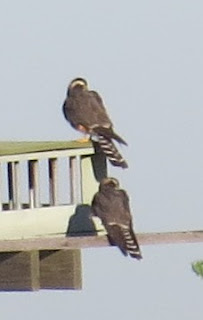 The pair on the hacking platform, much farther away!


We continued on, because he still needed Long-billed Curlew and some sparrows, plus John Ewan (a volunteer at Santa Ana) had passed on that another trustworthy birder was pretty sure he had a Gray-crowned Yellowthroat just past the Skeet Range, but he couldn’t confirm it.  So we at least went that far to see what we could pish out, and interestingly a Swamp Sparrow peeped from the reeds!  Couldn’t get it to come out, but even better was the King Rail that started “clapping” in the distance!  (Unfortunately there was no way we were gonna see that thing, so Ken had to be happy with a good “listen”…)  We heard some Long-billed Curlews but couldn’t spot them, and since Ken was more anxious to get to the Island (figuring he could get the curlews easy enough elsewhere) we headed back, only to slam on the brakes when a huge curlew stood next to the road, giving great looks, then slinking back into the grass!


Gull-billed Tern was another target, and they had been reported at the Highway 48 Boat Ramp, so we gave it a shot and ran into the Road Scholar group again!  Bob Powell was leading the group and said they hadn’t seen any yet, but in the meantime we enjoyed a couple of Yellow-crowned Night Herons, a white morph Reddish Egret, and some skimmers.


From there we took off for the Island, heading straight to the Bayside Flats, and thankfully they were drivable!  There were several groups of birds, so we kind of looped around so that Ken could get good, well-lit views out his window.  There were lots of Semipalmated Plovers around, but alas, no Snowies or Piping, but amongst the hordes of Dunlin we found a few Western Sandpipers (another lifer).  It was quite windy, so the terns were either facing away from us or had their noses under their wings, but the few that did show their noses all appeared to be Royals (with a token Caspian amongst them), along with the smaller Forster’s.  However, a lone tern sitting on the beach towards the south did turn out to be the coveted Gull-billed, and he shortly flew and gave us a show as he dove and nabbed stuff in the little mangrove “hammock” that sat in the middle of the flats!  There was a mob of stuff over by the private pier, so we managed to make it even that far, adding deep water stuff such as Common Loon, Red-breasted Mergansers, and White Pelicans to the list.  Later, however, while processing the pictures, I noticed to my chagrin that Ken's coveted Sandwich Tern made a cameo appearance while I was shooting a Ring-billed Gull - he was apparently one of those nose-in-the-wings terns that just decided to turn his head when I snapped the picture! 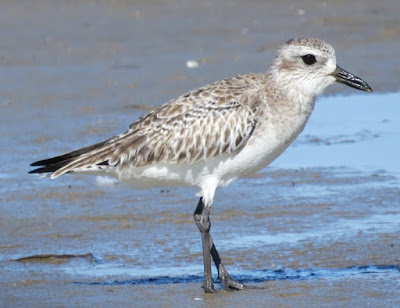 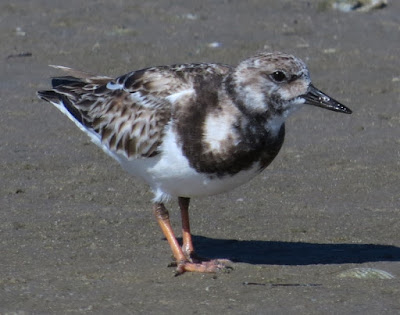 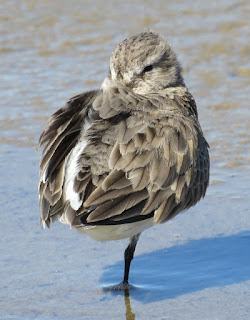 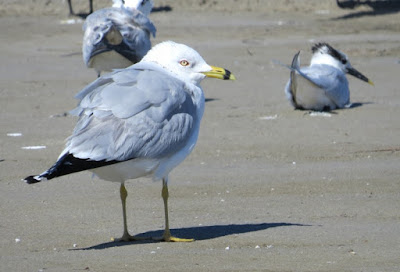 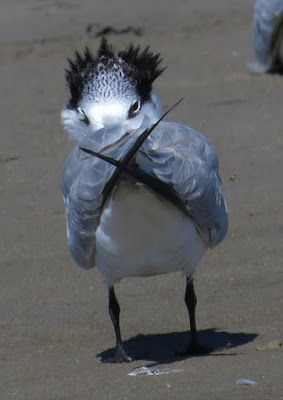 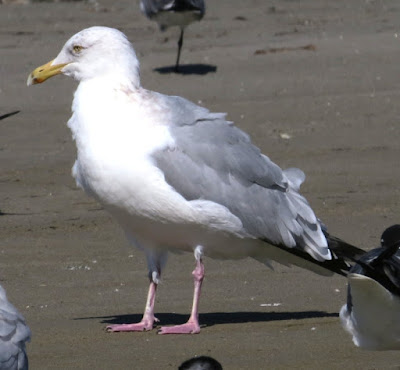 I wasn’t sure if the restrooms at the Convention Centre would be open, so we headed straight to the Birding Center, where I pointed out the Great Southern Whites that I promised Ken we’d see on the coast!  After getting our tickets we headed straight to the boardwalks, where, after squeezing by all the tourists enjoying the ducks and pigeons, we started looking for rails.  Out on the pier we enjoyed a point-blank dark morph Reddish Egret, and Ken spotted a Belted Kingfisher guarding the “No Wake” sign!  Being an expert on fish, he was pointing out the various fish in the bay, although he wasn’t sure what comprised the schools of tiny fish we were seeing. 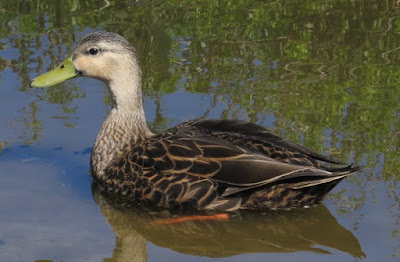 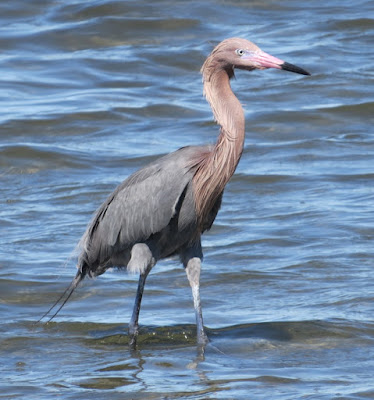 Reddish Egret (above and below) 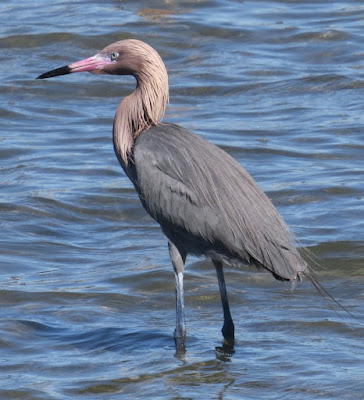 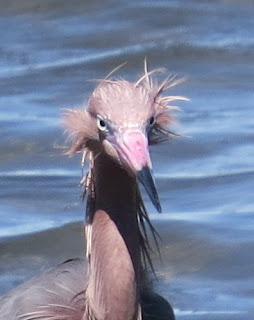 Having his own "bad hair day" (above and below) 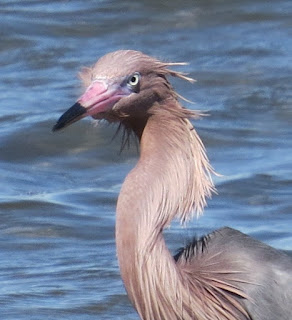 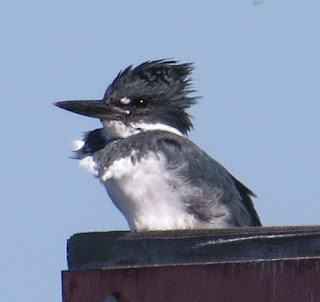 
Continuing on the loop I heard some high-pitched whistling that I thought were some kids squealing at first, then realized I was hearing Oystercatchers, and we just happened to latch onto them as they flew by!  A Northern Waterthrush called from the base of the mangroves, and further on we noticed that they had cleared out most of the reeds, but the birds didn’t seem to mind, as Common Gallinules and Coots were all over, along with a lone Redhead and Pied-billed Grebe close to the boardwalk!  An absolutely huge Alligator was hauled out, and this one gallinule was making the most sad, plaintive noise as he poked around looking for food!  Another Bird Blind had several Black-bellied Whistling Ducks, giving Ken a better look than he had had before, and the little island that is also visible from the CC boardwalk had several spoonbills and Greater Yellowlegs on it.  As we were on our way out we heard a mad squawking and looked back to see where a Black-crowned Night Heron had landed, but we didn’t see what had caused the ruckus (probably the gator…). 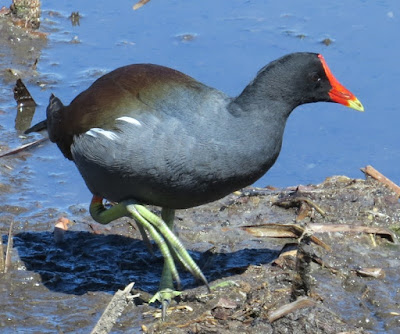 Common Gallinule (above and below) 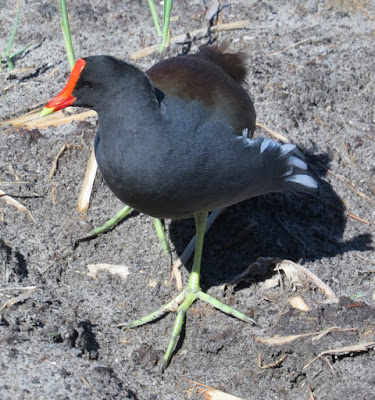 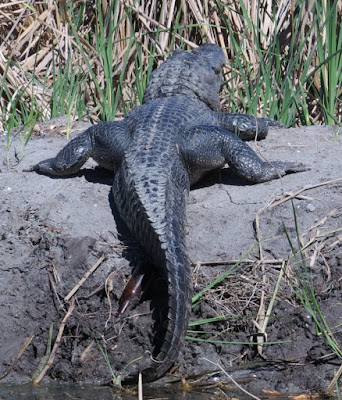 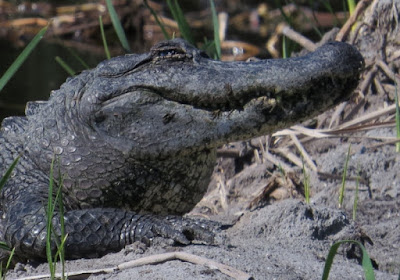 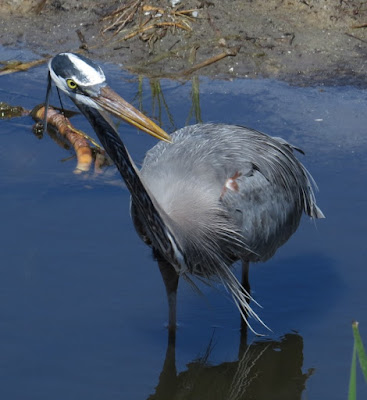 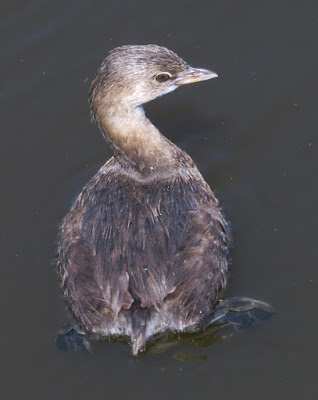 Pied-billed Grebe (showing off his lobed toes below) 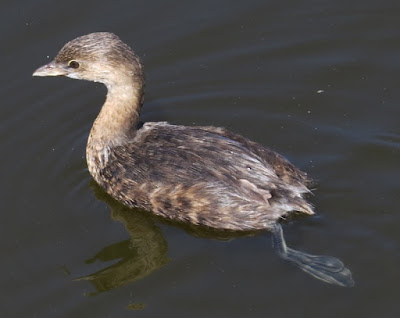 We headed back to the car, then swung over to the CC to eat lunch on the benches, where the little woodland that is hopping during migration was as quiet as could be!  After lunch we walked to the back area where we tried unsuccessfully to call up a Sedge Wren (got a Giant Swallowtail instead).  We hit the boardwalk after that where we ran into Michael Marsden leading a Naturalists Journey birding group (they’re really coming out of the woodwork this week J)!  He was showing the group a Little Blue Heron when a Least Bittern sounded off right next to us!  A perusal of the rest of the boardwalk yielded no Clapper Rails (I couldn’t believe we didn’t even hear any – that was an absolute first!), but a close Redhead was nice, and Michael’s group spotted some kind of yellow snake that disappeared before we could get a look at it.  Upon “landing” back at the center’s gardens, I was shocked to find a White-striped Longtail batting around the flowers! 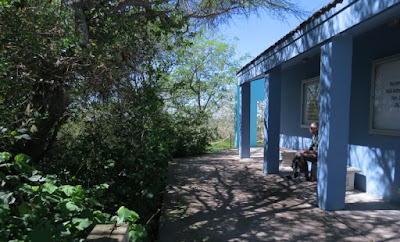 Lunch at the Convention Centre gardens 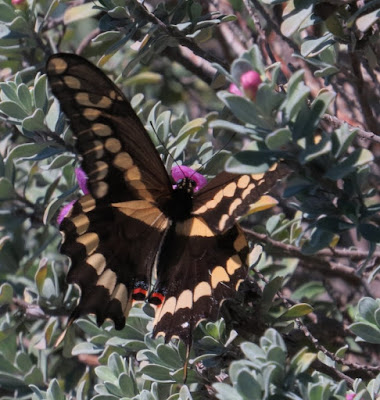 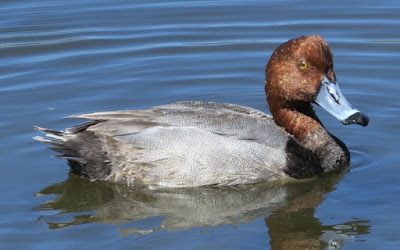 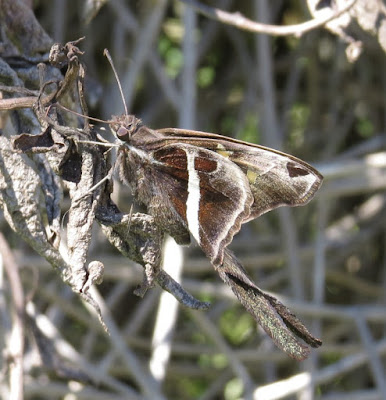 
We decided to make a return visit to the Flats, seeing that there were a lot more bird groups out there!  The Skimmers had moved in, and yet another vanful of birders was way out by the water’s edge, but we were rather nonplussed with the vehicles that insisted on driving right through the birds (while we were studying them, yet)!  Ironically, the birds themselves didn’t seem too perturbed; they just lifted off and settled right back down again, sticking their noses in their wings or doing the “dead skimmer routine”.  A small group of Short-billed Dowitchers was close by, which was another sought-after lifer.

More peeps on the beach 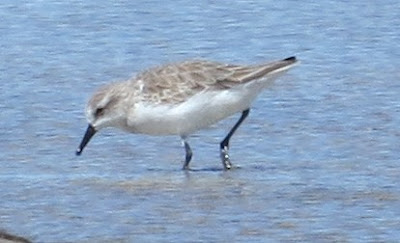 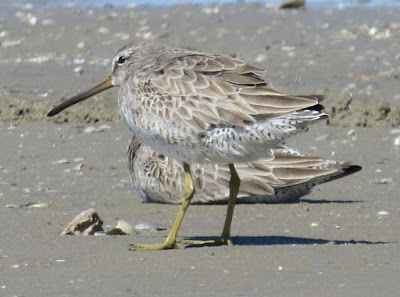 ...and his life Short-billed Dowitcher!

Yet another birding group enjoys the mob 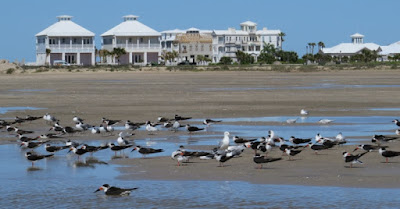 
After combing the flats, I thought that maybe we’d have enough time to check out Boca Chica Beach, because that was the only other place I thought we might have a reasonable chance at finding the plovers (without paying ten bucks for SPI beach access).  So we blasted down there, picking up three Chihuahuan Ravens on the wires on Boca Chica Boulevard itself.  The beach was in relatively good shape, but alas, nothing new to add – just a ton of cute little Sanderlings and all three expected gulls. 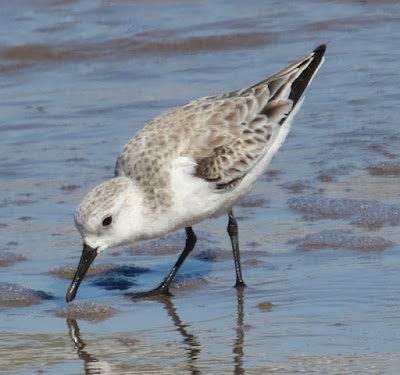 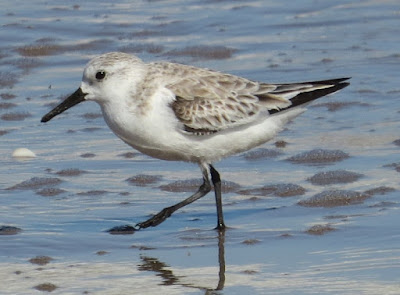 Headed home with 73 species for the day!  Bird List: