Carol, Mary, and Deb had a good head start as they had had a marvelous day out with Michael Marsden on Sunday the 3rd birding the coast, and again the next day scouring Sabal Palm and Laguna Atascosa on their own, getting crippling views of the Aplomado Falcon!  I wasn’t sure what else was left to see J, but they assured me that what they really wanted was help with sorting out the shorebirds, raptors, and sparrows, so all agreed that my original itinerary sounded like the best one.


With all the construction on US 281, we bypassed the Progresso Sod Farms and went straight to Estero Llano Grande, where we were greeted by a hungry Curve-billed Thrasher and two Inca Doves at the corner feeder!  Ibis Pond was full of birds, of course, but the star was a little Sora right off the deck and in plain view!  I suggested we get on the boardwalk to get the sun at a better angle, but not before enjoying a brilliant Buff-bellied Hummingbird at the feeders!  An Olive Sparrow was singing, but of course wasn’t cooperative for viewing purposes… 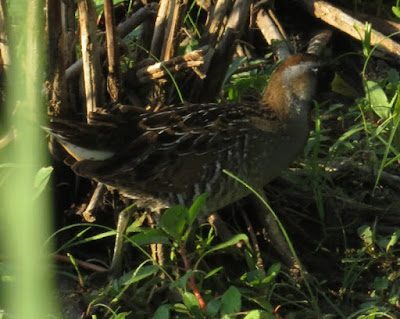 Sora off the Estero deck 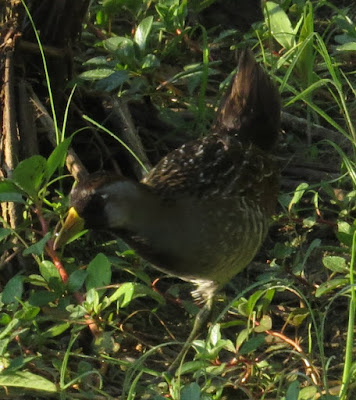 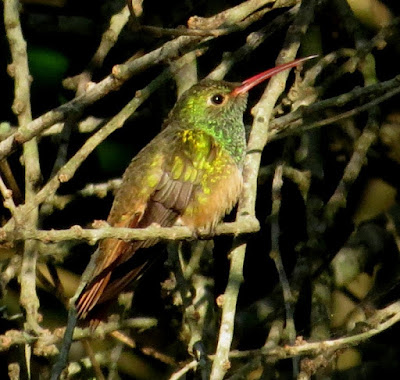 
The Purple Martins had arrived in force, but they were virtually ignored in favor of brilliant Blue-winged and Cinnamon Teals, White-faced Ibis, Snowy Egrets and a Little Blue Heron, and tons of side-by-side Stilt Sandpipers and Long-billed Dowitchers for good comparison!  A Solitary Sandpiper showed off for good measure, and a yellowlegs came in that was a good candidate for “sp.”, as the bill seemed rather short, but it was also thickish at the base with a pale area on the lower mandible.  Lincoln’s Sparrows gave good views over by the bushes, and a knock-down dead-gorgeous Roseate Spoonbill flew over, checking out the joint!  Closer to the gazebo we had lots of Least Sandpipers, but then two much larger Baird’s Sandpipers came wheeling in!  A nice male Gadwall had been feeding earlier, and when a beat-up female showed up where the Least Sands were, I made the gals key it out themselves until they arrived at the correct ID on their own (it was almost like a game of, “You’re getting warmer!” J)  We started getting some soaring raptors at that point, the first being a young Swainson’s Hawk that didn’t quite have the fully dark flight feathers yet, but as the girls poured over the fine points in their books, suddenly a classic Broad-winged Hawk flew in low and circled right over our heads!  They all agreed that that was the way to see a hawk! J 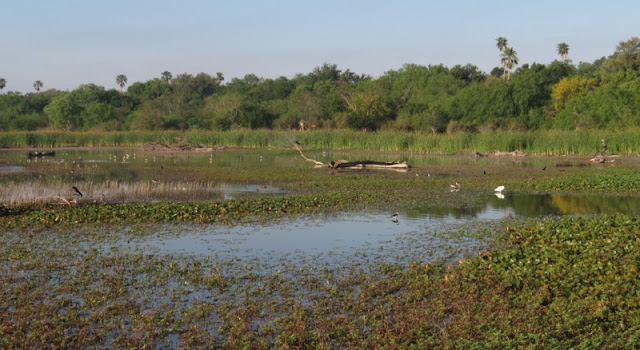 Ibis Pons from the boardwalk
Curlew Pond gave us a good study of a washed out Least Grebe, and Dowitcher Pond gave us more Stilts (of both types) and dowitchers, plus Shovelers, Green-winged Teal, and Fulvous Whistling Ducks.  Over at Alligator Lake, Mary found a young night heron that we concluded was Yellow-crowned, but unfortunately the Pauraque and Screech Owls were no-shows; we had a Green Heron on the nest as a consolation prize, however. 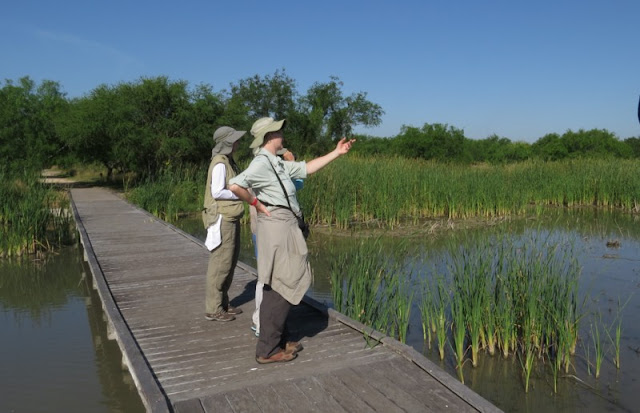 
Food was calling about that time, so we headed back to the cars, trying to pull out an uncooperative Carolina Wren in the process.  No such luck, so we pulled out our stash, and headed on to the Weaver Road Sod Farms (I guess the official name is Superior Turf) via Cannon Road,  where the songbirds were quieting down (except for the Couch’s and Tropical Kingbirds), and what was calling (like Verdins and more Carolina Wrens) just didn’t want to show themselves.  The Scissor-tailed Flycatchers were just the opposite, posing on the wire fences as we pulled right up to them, and a pair of Harris’ Hawks gave great looks.  At the sod farms, my heart sank at the fact that the big flocks that were in the first field on my own trip over there on Saturday were way back there, and the heat waves kept us from making any kind of a decent ID.  So we rolled on, hoping that maybe something would show up further down, when suddenly the girls spotted a bunch of sandpipers in the ditch right next to us:  about eight Baird’s Sandpipers!  What looks!  Then a little further on the star of the show was an Upland Sandpiper right next to the road in wonderful light, just showing off every field mark!  Behind him was a large flock of American Golden Plovers, so everyone got great looks at some of our star grasspipers!  I was taking a video of the Uppy when it suddenly started crouching and looking overhead, and Mary exclaimed that a hawk was passing through!  The hawk turned out to be a young Peregrine that spooked the plovers, but the Uppy stayed put!  After we jumped out to try to refind the falcon, a little buffy bird bounced past us going Pike! Pike! Sprague’s Pipit!!  There were, of course, many more Horned Larks that were very cooperative… 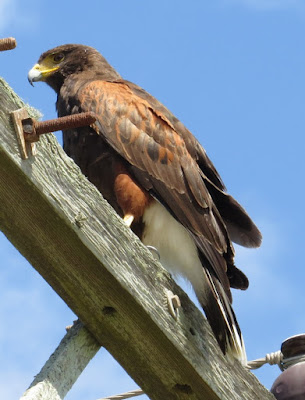 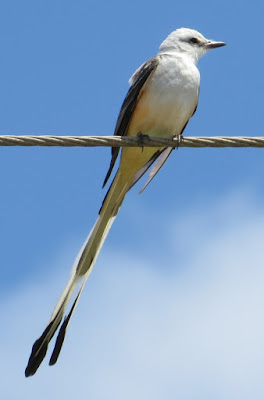 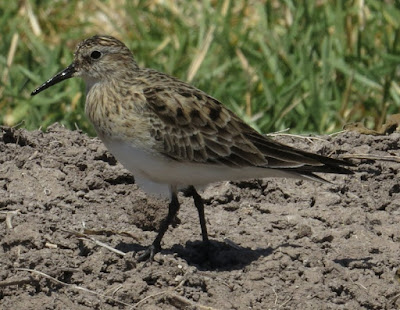 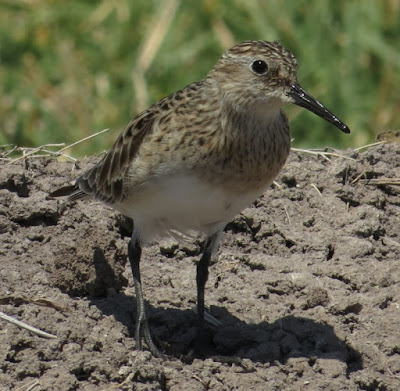 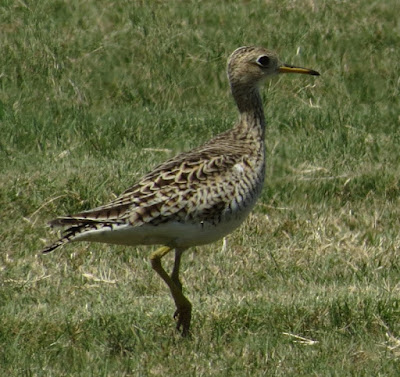 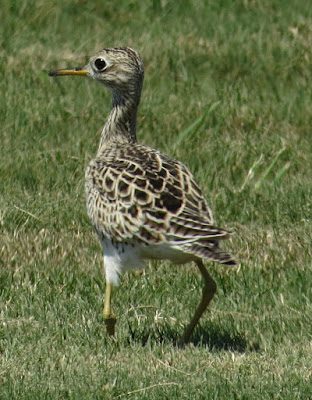 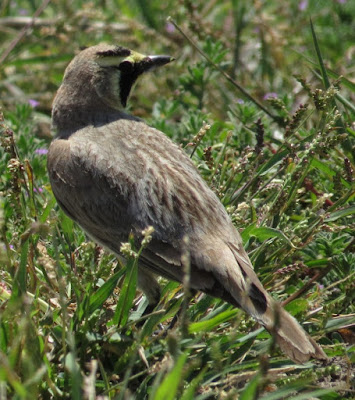 Horned Lark
From there we headed to Sugarhouse Pond, where I warned the gals that it could be fantastic or dead, depending on the water level, and this time it was pretty dead.  The little “1015 Pond” was pretty dead as well, and Delta Lake was anticlimactic, too, at least until a couple of Black Vultures dropped in just as we were leaving, a life bird for Carol!


Things were definitely slowing down once we got to Brushline Road; we had a couple more Swainson’s Hawks and added Ruddy Duck at one of the wetlands, but no sign of any Purple Gallinules.  Just before reaching the highway a nice Lark Sparrow posed, and continuing north a van coming from the opposite direction scared up a Nilgai, which we only got a brief glimpse of.  Many more cooperative Scissortails greeted us along Ken Baker Road, and at one point a Turkey exploded from the side of the road!  While studying another Swainie some of us caught sight of a very distant White-tailed Hawk – even then, that tail is like a beacon! 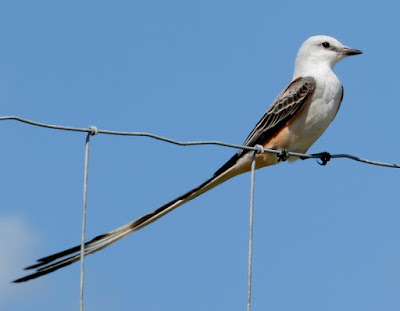 Yet another Scissor-tailed Flycatcher