The weather report was dicey (and it had been raining when I got up), but by the time I picked up Joel and Sandy from Florida, the rain had abated, so the only task left was to decide where to go, as rain was still in the forecast.  This was their first trip to the Valley, and they really had their hearts set on visiting Bentsen and Santa Ana, so that’s where we headed!


Thankfully it was only cool and overcast when we got there, and we knew it was gonna be a great day when the male Hooded Oriole put on a great show and a Black-throated Gray Warbler greeted us along the walkway to the Visitor’s Center!  We poked around the gardens a little before the center opened and bagged their life Buff-bellied Hummingbird, but an Archilochus hummer buzzing in was a little harder to identify, and I didn’t feel confident calling it the Black-chinned that had been hanging around.  An Altamira Oriole allowed a nice comparison with the Hooded, and Olive Sparrows were ridiculously cooperative.  Another birder told us of a Roadrunner that was hanging around; sure enough, as we made our way back to the camp host area, we heard the mournful, hound-dog coo!  As I’ve mentioned, I can’t resist messin’ with Roadrunners, so I cooed back, and sure enough, he came right out and cooed back at us!  This was a most-wanted bird for Joel and Sandy, and they were thrilled with the look!  A peek at the feeder at the back of the building yielded another young male Archilochus who thankfully finally turned just the right way to prove himself a Ruby-throated (to the chagrin of my eastern friends)! 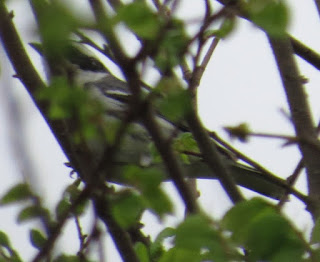 Female Black-throated Gray Warbler, a rare winter visitor from the west.﻿
As I got us checked in, the hawk watch people were discussing the weather and announced that the chance of rain had gone from 80% to 20%, so I went to get my scope and met up with J&S just in time to catch the tram to the resaca!  That certainly saved some time; we were able to add a fly-by Ringed Kingfisher to their life list, and comedy relief was provided when Sandy was desperately trying to explain to us where the Belted Kingfisher had landed!  (We were both looking at the wrong palm tree…) We couldn’t find the roosting Screech Owl one gentleman had told us about, but I had been hearing the Gray Hawks (and had historically had Beardless Tyrannulets hanging around both ends of the Acacia Loop), so I suggested we walk that direction and circle back by way of the loop, skipping the blinds (they had bagged most of the common Valley specialties already on previous days).  That hit pay dirt when a beautiful Gray Hawk flew in and gave us great looks, and walking back along Nopal Road both Sandy and I assumed we were looking at a stump until we realized it had a cat face on it – a Bobcat!  He just stood there for the longest time until he finally decided to cross the road! 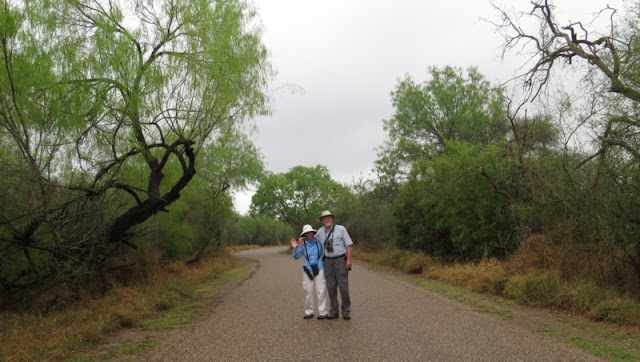 Sandy and Joel along Mesquite Road at Bentsen SP 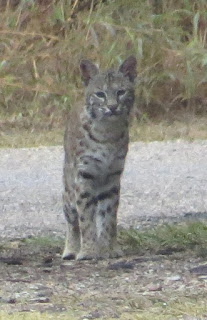 Bobcat
We managed to hitch a ride with the tram coming back, made a quick and fruitless search for Green Kingfisher at the canal, then poked down Old Military Highway and the Levee Road just to see what we could see.  A knockout Ringed Kingfisher posed on a wire at the canal crossing, and a perched kingbird finally tittered, confirming him as a Tropical.  A little further down the road I heard a churREER!, backed up, and J&S got great looks at their life Couch’s Kingbird!  A pair of Gray Hawks that were perched along the levee gave us great views (front and back, just like a field guide, Joel said)!  Just past the Riverside Club, we hit pay dirt again:  a kettle of Turkey Vultures had a smaller dark raptor in with them that I at first assumed was a Zone-tailed Hawk (as they often associate with TVs), but it looked all wrong:  it was much smaller compared to the vultures, and the tail was way too long for a Zonie (although it was definitely strongly banded) and the wings were too short and rounded as well.  The bird’s head stuck well out in front, and while the shape of the wings wasn’t as “paddle-like” as often illustrated, we all felt confident that we had a black morph Hook-billed Kite! 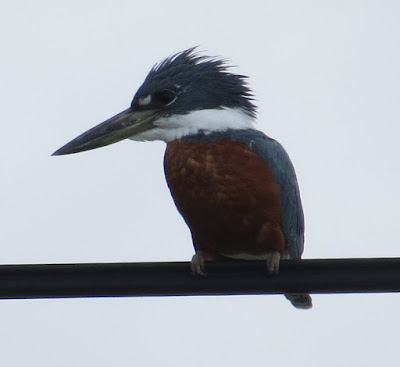 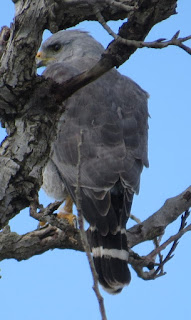 Gray Hawk
We then wheeled into Anzalduas, where the first order of business was to get them a Sprague’s Pipit, as they weren’t sure they had seen one in the past.  We were almost to the other side of the field when one finally flushed and then fed amongst the Western Meadowlarks; it wasn’t in the greatest of light, but the bird gave a good pike! vocalization, and once in the scope we were able to see the pertinent field marks.  No tyrannulets this time, so in the time left, they agreed that a chance at several new sparrows, wrens, and hawks along Brushline Road trumped the Jacana, so off we went! 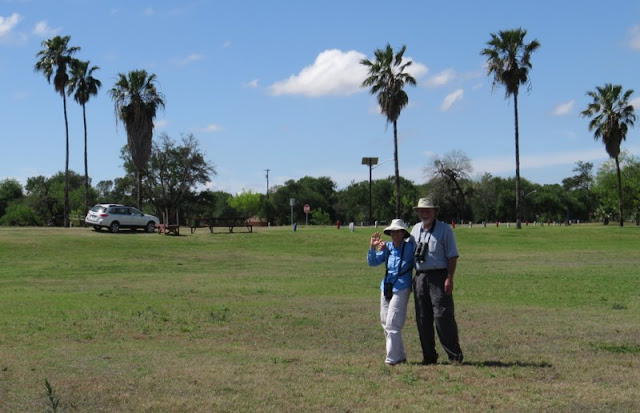 Sandy and Joel in the Pipit Field at Anzalduas
It turned into a beautiful day, actually, and birdlife along the road was exciting!  Almost right away a Bewick’s Wren sang and finally sat on top of a dead bush, and Vesper and Savannah Sparrows gave good comparative views.  A barren field hid a Cassin’s Sparrow feeding in one of the ruts, and later we ran into an individual that was just starting to exercise his song and was a bit wobbly yet!  The wetlands here and there gave us Avocets, Long-billed Dowitchers, and Greater Yellowlegs in the shorebird department, and one pond had the previously-reported male Wood Duck, a rarity down here!  J&S had asked what the chances were of seeing a Say’s Phoebe, and I told them that this year they were actually pretty good, as several had been reported all over the Valley this winter, even though they’re considered rare!  Sure enough, Sandy found one along a fenceline, curiously cocking its head as though checking the ground and the sky simultaneously!  (We actually found a second bird further up the road…)  Before crossing SR 186 we spooked up a Clay-colored Sparrow, so that offered a good opportunity for Spizella identification! 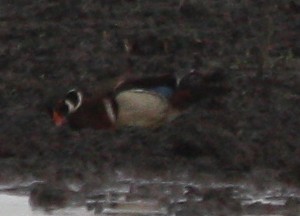 "Documentation shot" of a male Wood Duck, a rarity in the Valley 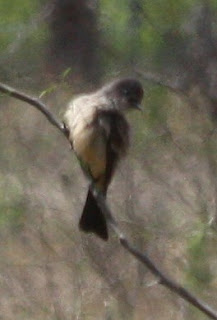 Fuzzy Say's Phoebe, another rarity that's quite numerous this winter
Bewick's Wren
﻿
North of 186 started my personal favorite road-birding route, the La Sal Del Rey Route, which explores a series of dirt roads that give roadside access to various ranches and a good chunk of the Lower Rio Grande Valley NWR.  There were lots of little boggy areas where Vermilion Flycatchers were hanging out, and before long another target, a Cactus Wren, was singing off to the side, eventually coming close for great views!  We had lots and lots of Pyrrhuloxias, Shrikes, and Mockingbirds, but what really got us laughing by the end of the day was the fact that, after worrying about whether they’d see a Roadrunner this trip (and of course we got the Bentsen bird), along the road we had a Roadrunner, and another Roadrunner, and another Roadrunner, until we figured we had seen close to 20 birds by the end of it!  The little “gnat-nadoes” were out in force, and we saw how the Roadrunners were feasting on the bugs closer to the ground!  We also saw a good-sized frog/toad leaping (and I do mean leaping – like at least a foot in the air) along the road; Joel gave him about a ten-second life expectancy at that rate! 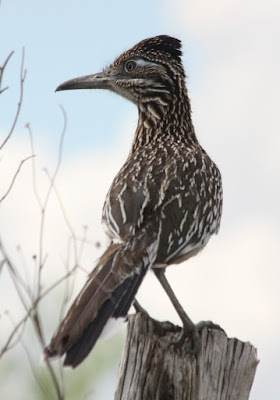 One of several Roadrunners seen on the route


We were sweating the hawks until several Harris’ and a couple of Caracaras finally showed along the “zigzag” portion of Brushline.  We added a few nice water birds at the big farm pond at the end of the road (including Roseate Spoonbill), then backtracked to Ken Baker.  My FOS Scissor-tailed Flycatcher flew by along here, then suddenly just before Rio Beef we caught sight of a glorious White-tailed Hawk taking off with a snake in his talons!  Thankfully he landed on a post in great light, and we were able to get great scope views!  Closer to Rio Beef an adult and immature White-crowned Sparrow posed, and a nice Peregrine Falcon flew past.


We had to head home after that, but we all went home happy campers! Joel and Sandy had gotten close to 40 lifers this trip, and today’s total was nothing to sniff at, either!  Bird List:

Posted by Alamo Inn BB Gear and Tours at 1:03 PM