The Heat Is On!

Thursday’s trip to Starr County was, as per usual, low on quantity but great on quality!  We arrived at Salineño to find a couple of tour groups had beaten us there and were crowded on the only dry spot where you could look upriver!  So we decided to hunt down the seedeater, which I heard almost immediately upon getting out of the car!  Another couple from Arizona were also trying to track it down, but it had quit singing by the time Sharon and I got to the area.  So we headed down to the end of the trail and had a great view of the river; she was thrilled that she was actually seeing Mexico!  Things were quiet at that end except for a Mexican Duck that flew by and an “Audubon’s” Warbler, and we actually heard another seedeater singing upriver, but on the way back, the guy from Arizona came and got us – they had found the seedeater!  So back we went, and eventually the little guy sat way up high in a spindly tree, just singing away, his little tail pumping along with each phrase!  What a look!

Sharon poses next to the Rio Grande 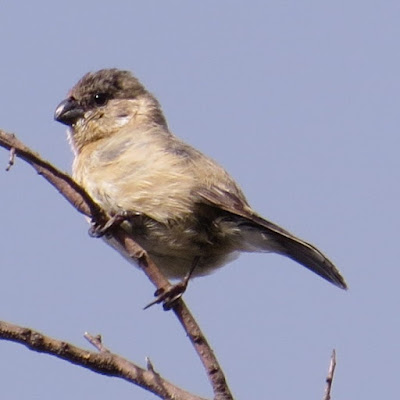 
We then joined the rest of the crowd doing river watch, and about the only exciting birds were a Gray Hawk being chased by a grackle almost as big as he was, and a Ringed Kingfisher that finally decided to fly by and give everyone great looks!  A big flock of Blue-winged Teal weren’t “uncommon”, but it was a pretty sight and gave the visiting Brits some good photo ops! 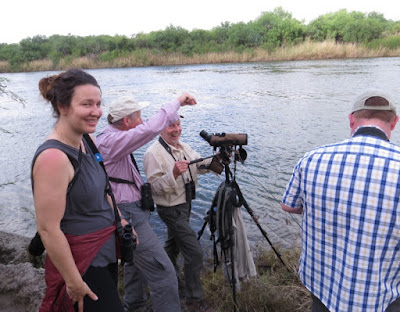 Happy birders at the boat ramp


After awhile it was time to move on, so we headed up to the Dump Road.  Just as we made the right turn onto the main road, what should be standing right by the side but a gorgeous Scaled Quail!  He was in perfect light, and seemed to pose forever while we both got crippling views and shots!  There was actually a second bird down in the grass, and he eventually hopped off his tire to go join his mate… 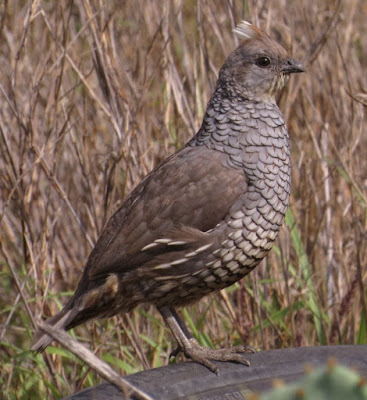 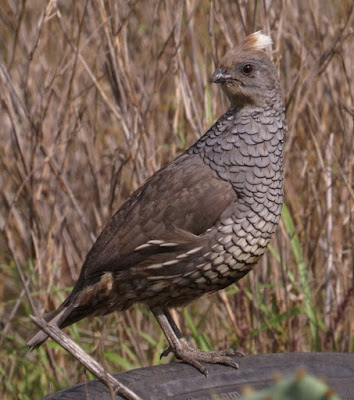 Things were rather anticlimactic after that, but we did manage to spot some more desert birds such as Black-throated Sparrow, but the Verdin was a little less cooperative.  A male Bobwhite stood in the middle of the road before flying off, and his wife soon followed, giving us a nice look first.  Heading over to Falcon County Park (most locals call it “Starr County Park” to avoid confusion with Falcon State Park next door), we made a sudden stop for a Kestrel, which was Sharon’s first!  Just before entering the park, I was surprised to see a young White-tailed Hawk that subsequently took off right towards us, as I couldn’t recall ever seeing one in that area before!  In the park proper, a Cactus Wren was singing at the top of a tree right outside the car, and after finding a shady spot to park we started the walking loop around the center thicket.  Almost right away Sharon spotted the Vermilion Flycatcher (another “most wanted” bird), and both Bullock’s and Hooded Orioles showed up.  A huge “bird-nado” in the sky turned out to be a mob of White Pelicans that had caught a thermal and was circling around gracefully, and a House Finch warbled briefly and then took off before he could be “documented”.  A sparrow flock blasted from tree to ground to tree, most of which were Larks, but we also picked out both Chipping and Clay-colored.  No sign of the Red-billed Pigeons, alas, but hopping in the car and driving the perimeter we scared up another Roadrunner, and this one we actually raced to stay abreast of it! 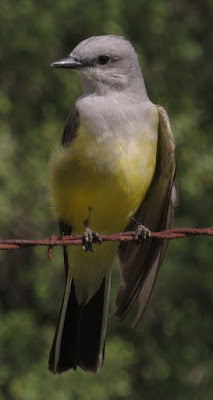 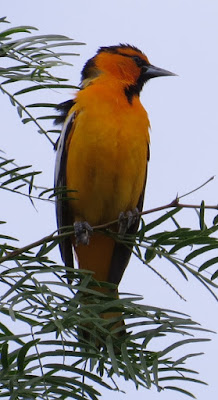 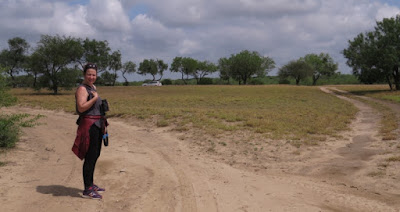 
From there we went to the state park where Sharon spotted a Painted Bunting singing in the bushes on the entrance road along with a Texas Tortoise making headway across the road, but things were warming up by then; we did walk the loop over by the boat ramp and just got exercise and a few Coots for it, then decided to drive closer to the lake where we thought we had several egrets that turned out to be plastic bags stuck in the trees…  Just for kicks and grins I decided to go down to the old Falcon Dam Overlook to see if security had lightened up since I had last been there about seven years ago, and when we saw that the gate was open things looked hopeful!  However, when we got down to the actual overlook, a very nice official wheeled over and told us it was still off limits, due to a bomb threat from a cartel, I think he said… L 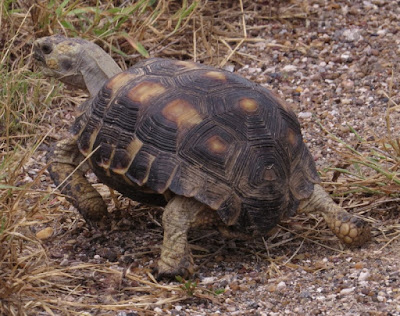 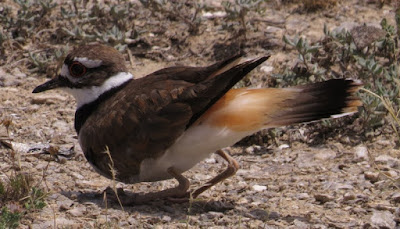