Day Three with the Great Danes - Hanging Close to Home


Pat and I decided to take the Danish group to Frontera first the next day, and we had barely gotten out of the vehicles before the Crimson-collared Grosbeak started calling from the thicket!  By necessity we had to split up the group, and unfortunately Pat’s group missed the bird while our group got brief but identifiable looks of the bird just short of the Payne property, then again along the trail that’s close to the new pond overlook.  The Blue Bunting never showed while we were there, but the lady Black-headed Grosbeak dutifully came to the feeders, and the other feeder birds showed well (except for Green Jay, which remained surprisingly shy during the course of the day).  The Green Kingfisher also gave fleeting looks as it shot across the pond twice, and the Groove-billed Ani called and then showed itself for a handful of folks.  Several Red-crowned Parrots flew around the palm as though they were thinking of lodging there, and an Olive Sparrow gave crippling views near the Sabal Palm grove!  A Blue-headed Vireo gave us fits by singing but never coming out, while a Black-and-white Warbler was also singing his heart out and being totally ignored!  And sometimes the birds we most take for granted are the highlights for visitors, as the male Lesser Goldfinch in the citrus garden was the highlight for many! 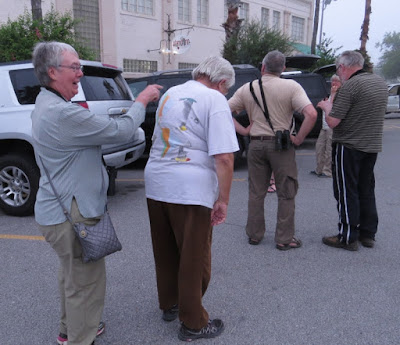 Karen traces the path of our migrants on Pat's T-shirt! 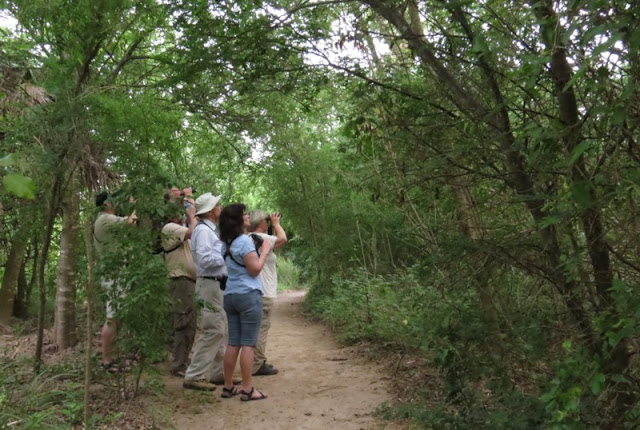 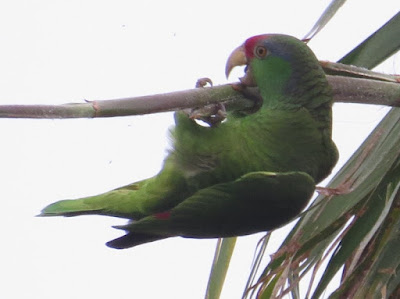 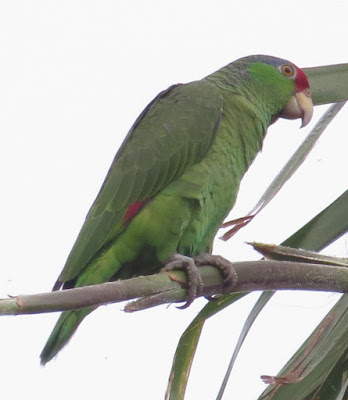 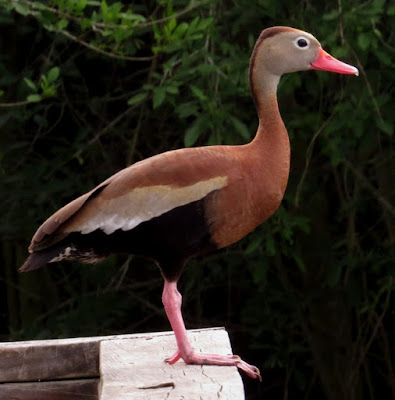 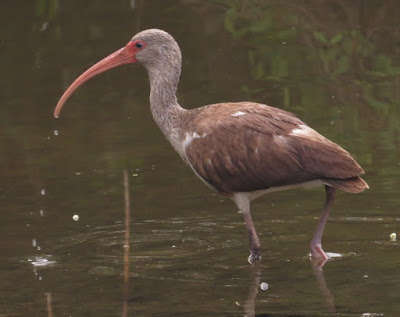 Immature White Ibis (note the water dripping from the bill!) 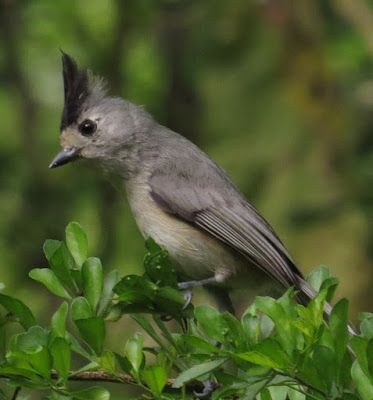 Black-crested Titmouse
Headed to Estero Llano Grande for lunch after that, enjoying a lingering Cinnamon Teal off the deck.  I got everyone on their feet when I saw a kettle and thought they were Mississippi Kites at first, but they turned out to be very pointy-looking Swainson’s Hawks!  Mary Gustafson came by about that time and gave great directions on how to find the Pauraque, so we headed straight for Alligator Lake to look, but not before stopping for Yellow-crowned Night Herons at Grebe Marsh!  I thought I heard a phoebe but couldn’t spot him; however, later I heard that one of our group had seen and photographed a Black Phoebe there, so that’s undoubtedly what I heard.  At the spot, Karen (one of our group) miraculously found the Pauraque, so everyone had scope views of this great bird!  At the overlook, a Ringed Kingfisher put on a great show by catching a fish, then beating the snot out of it before gagging it down!  (Later he circled over Dowitcher Pond several times, rattling away…)  We then dragged ourselves back to the VC where the gang finally got a great look at a Buff-bellied Hummingbird, but a visit to the Tropical Zone bore no Green Jays or Altamira Orioles (we did spot the butterfly walk people, though… J). 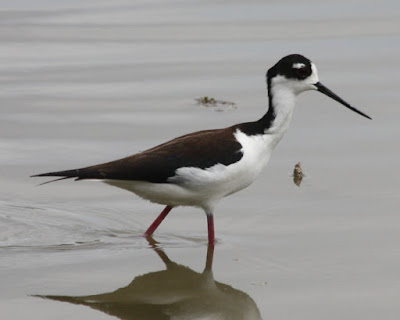 Black-necked Stilt from the deck at Estero 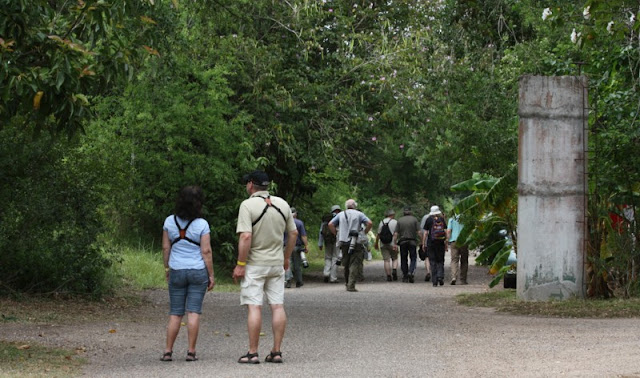 The gang in the Tropical Zone
Some folks really wanted to try for Buff-breasted Sandpiper, so from there we headed down to the Progresso Sod Farms where we hit the jackpot:  tons of Golden Plovers, Pectoral and Baird’s Sandpipers, and a handful of Uplands and Buff-breasted!  We even found a couple of Sprague’s Pipits!  That entrance onto Hwy 281 was dicey, however… L
From there we headed to Santa Ana for a last ditch effort for Altamira Oriole, and just before we crossed the canal a Green Kingfisher was perched up on the railing!  Up on the levee we had lots of Broad-winged Hawks circling, and even a Gray that chased a Broadie out of his air space!  I heard a Beardless Tyrannulet in the woods, so those who wanted to chase it came with me, and in the process we got great looks at an immature Altamira Oriole!  After that the gang was willing to forego the tyrannulet in favor of ice cream J, so we headed back, only to find four more Altamiras on the levee!
Headed home with 90 species for the day!  Bird List:
Posted by Alamo Inn BB Gear and Tours at 2:16 PM