Ron and Char had been birding on their own for awhile before hooking up with me, but Ron’s life list was a little different in that he didn’t count the bird unless he could photograph it!  So since they had either already been to or were planning on going to two of the best spots in the Valley for photo ops, I decided on Quinta Mazatlan for a chance at migrants and maybe the nesting Green Parakeets.  It was a good sign when we pulled into the parking lot, got out of the car, and his first new bird was right overhead:  a calling Brown-crested Flycatcher!


In order to maximize our time there, we spent about five minutes at most of the benches; we had heard an ani coming in, so I was wondering if this harsh sound I was hearing at the drip was just an odd call I had never heard, until it dawned on me that it was probably a frog…  It was actually rather quiet, but a Long-billed Thrasher gave nice views, and when we got to the “new area” (called the Ebony Trail I found out), we found two pairs of Green Parakeets checking out the nest holes!  They were so cute, especially when one would stick her little head out the hole!  Circling around to the back of the mansion, a few silent parrots flew overhead and then landed in a tree; of the two visible ones, one was a definite Red-crowned, and the other was a Lilac-crowned!  After paying the entrance fee we continued on the back way, past the Education Building and past the little pond, where a Wood Thrush landed briefly on a log and then was gone!  As we made our way to the main road, we flushed a Chuck-will’s-widow, which miraculously landed in the woods across the street where we could actually see him!  What a treat!  The main feeder area had mostly doves and Chachalacas, but on the way back to the parking area an Olive Sparrow hopped around practically at our feet! 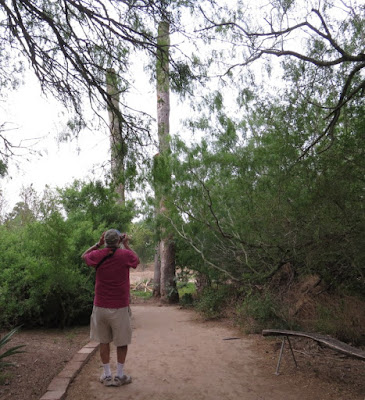 Ron adds the Green Parakeet to his photo list! 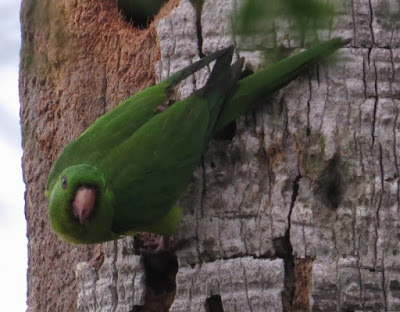 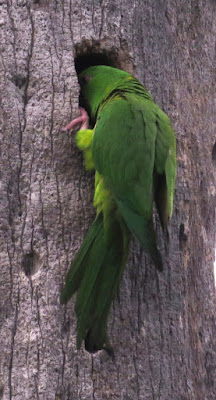 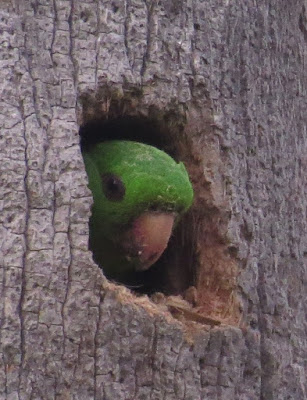 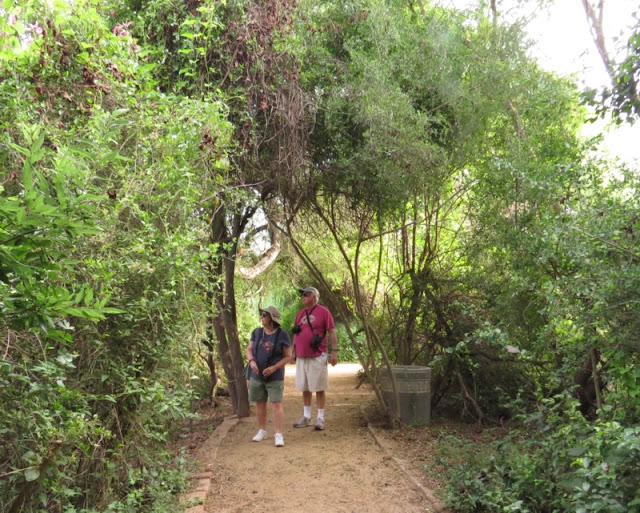 Ron and Char along the trail 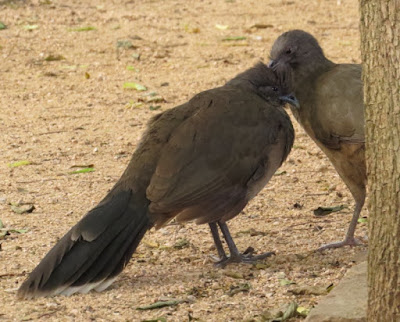 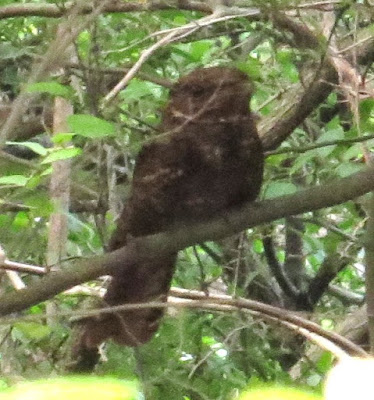 Not the best shot, but you don't often catch a Chuck-will's-widow perching in a tree! 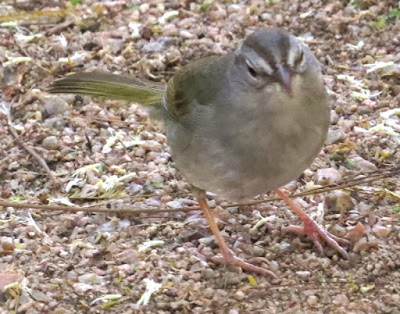 
With several new birds under his belt, Ron was very pleased, but in deciding where to go next, Char asked about the possibility of Northern Beardless Tyrannulets, so we decided to swing over to Anzalduas.  When we descended the levee, Char said she remembered the place from a previous trip: there was such a big party going on that the guy at the entrance gate automatically gave them plasticware and napkins!  (Must have been Easter Sunday…)  We cruised the roads and got out to walk a couple of times, seeing the requisite Black Phoebe, a silent “Copical” Kingbird, an uncooperative Altamira Oriole, and the Cliff Swallows nesting under the dam, but nothing new for Ron; I did hear a tyrannulet, but he was way back in the back area that is closed off to the public.  A Gray Hawk was whistling as well, but never showed. 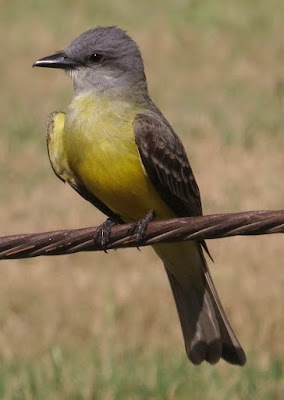 Tropical and Couch's Kingbirds are virtually identical, so unless they talk, you can be hard-pressed to tell which species you have!

Cliff Swallows nest on the dam