Adventures of a German Writer - Part 2


At 5:45 sharp Friday morning we left the Inn and made it to Bentsen, where even in the parking lot we were surrounded by Pauraques “wolf whistling” away!  We even were able to catch the eye shine of a couple of birds that were sitting on the entrance road!  A pair of Eastern Screech Owls trilled next to us, and closer to the resaca we heard the distant songs of some migrating Chuck-will’s-widows!  But the best bird was a chuckling Elf Owl right next to the road!  Unfortunately he was too buried in the foliage to see, but it was a great “listen!”


That was pretty much it for the night birds (we were surprised that we never heard a Great Horned Owl), so we went to the resaca to see in the dawn, scaring up a Striped Skunk in the process!  A nighthawk batted by in the early light, but we couldn’t see it well enough to tell which type.  The reeds were just stuffed with Great-tailed Grackles and Red-winged Blackbirds judging by the cacophony coming from across the way, and while a Ringed Kingfisher did give his machine-gun-like rattle, he never showed.


After sunrise we wandered over to the restrooms where I heard a Northern Beardless Tyrannulet calling further down, so we headed that direction.  We ended up making the whole Acacia Loop where we finally found the little guy calling from the top of a dead tree, and a little further down a Brown-crested Flycatcher was doing the same thing!  What I thought was a big dove perched against the sky at first turned out to be a Gray Hawk, and a jabbering sound overhead alerted me to a Western Kingbird flying over!  Back at the main road I heard an Altamira Oriole at one of the feeding areas, and we were able to track her down as she gathered nesting material!  That was another “dream bird” for Christopher, so he was very happy!  On the way out, the Cave Swallows were swooping around the little bridge over the canal, and when Christopher mentioned he had yet to see a Black Phoebe, said bird dutifully perched on the railing right behind us!  Back at the Visitor’s Center the local Roadrunner was giving his hound-dog song! 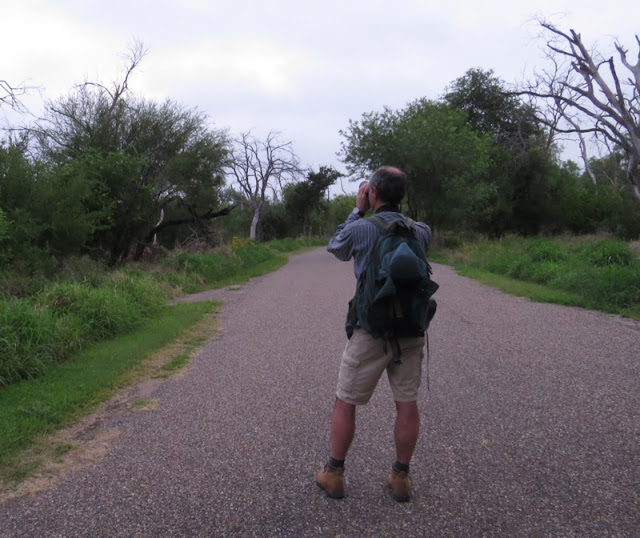 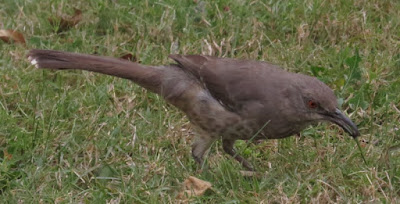 
Anzalduas was next on the roster, so we took Old Military Highway (OMH) and the Levee Road over, so Christopher got an elevated view of the Rio Grande!  On the way he miraculously spotted a Broad-winged Hawk in a tree!  Coming into the park, I asked him if he wanted to try for Sprague’s Pipit, and he certainly did, so we parked and hiked across the field, even though I wasn’t sure the birds would still be there as it was getting close to the time when they should be heading north.  Ironically the first birds he spotted were not meadowlarks, pipits, or sparrows, but a nice flock of Upland Sandpipers!  I was beginning to think the pipits were indeed gone until Christopher called me over, thinking he had one, so we stalked and flushed a little silent guy that bounced up a couple of times amongst the Savannah Sparrows, and by cracky it was the Sprague’s!  Said bird allowed ridiculously close approach as we both obtained crippling views and photos! 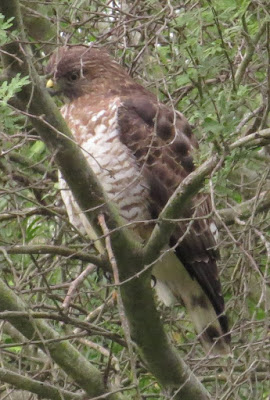 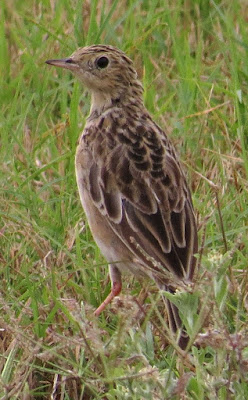 
Things were rather anticlimactic after that, but we did manage to see a nice kettle of Broad-winged Hawks.  I explained to him how the floodway was designed to divert the Rio Grande in the event of major flooding, which happened in 2010 when Hurricane Alex dumped so much rain in Mexico that both Amistad and Falcon had to release water, and the result was that our riverside parks were all flooded for many months!  It was a small picture of what used to happen naturally many decades ago in the Valley! 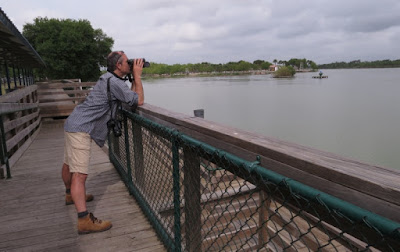 Christopher at the Rio Grande


The last stop was the National Butterfly Center, so we backtracked along OMH and got ourselves checked in before heading down to the main gardens.  It was threatening to rain, so we parked ourselves at the feeder area where White-tipped Doves, Green Jays, Chachalacas, and even a Bobwhite were all indulging!  Even the grackles were entertaining as they puffed themselves out and tried to outdo each other with their electrical “songs”!  But we didn’t have to wait long before a gorgeous Altamira Oriole came dashing in to an orange! 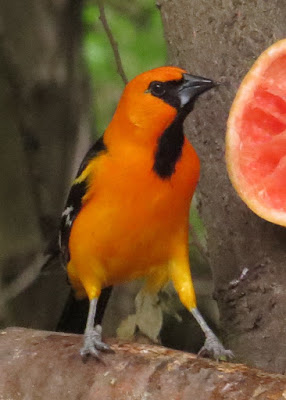 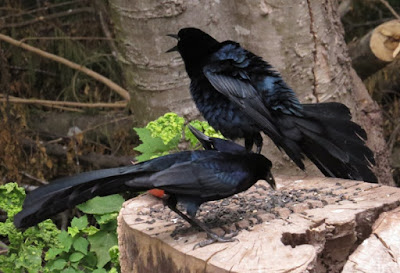 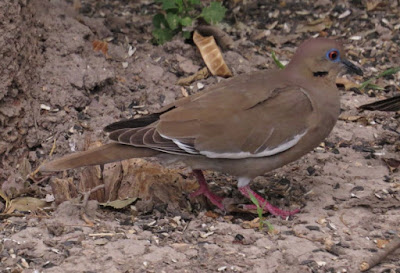 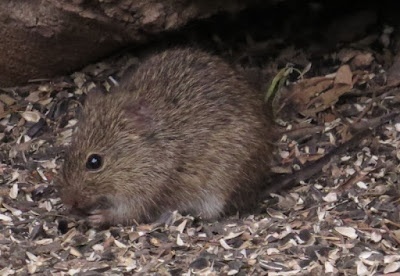 
Shortly my friend Dan Jones showed up looking for a rare Banded Patch that had been reported, and after telling us about some unusual butterflies up front, we decided to head back up (seeing as we were getting dripped on) and see what we could find, as Christopher was also interested in butterflies.  As the sun intermittently tried to peek out, the butterfly action increased, and we were treated to great views of Bordered Patch, Phaon Crescent, Queen, and Christopher’s personal favorite, a Black Swallowtail!  Out back we had a beat-up Long-tailed Skipper, a Theona Checkerspot, a Brown Longtail, and a White-striped Longtail that unfortunately got away before Christopher could see it… 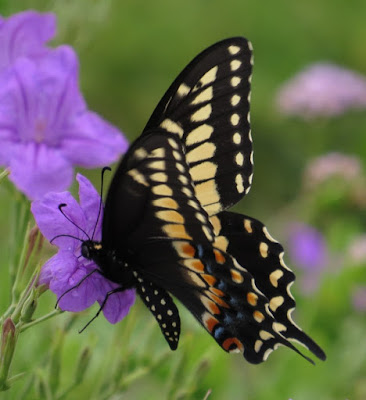 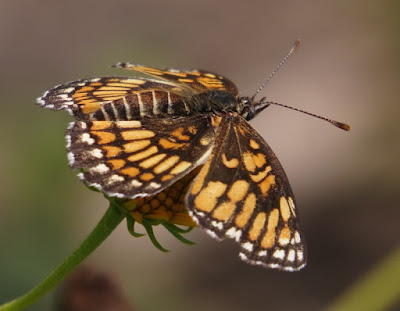 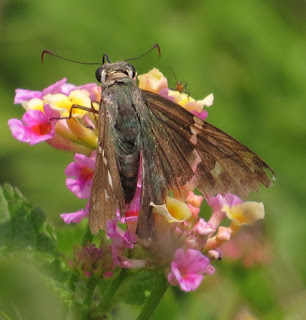 
We had to get back, but that wasn’t the end of the adventure:  during the morning I was getting reports of good birds at Frontera, so since Keith was taking Christopher birding for the “afternoon shift,” I suggested that as a destination.  I was technically off duty after already birding for close to eight hours, but the temptation proved too hard to resist, so with Keith’s blessing I met them over there!  Once checked in we all headed into the forest, and stopped at one of the water features to see what would come in.  Shortly a feeding flock happened by that included the reported Blue-winged Warbler, but also included Nashville and Black-and-white.  We continued on, and it wasn’t long before Christopher gasped, “What’s that blue bird?!”  He had found the Blue Bunting!!  Said bird put on a great show, hopping around and peeping and feeding; we couldn’t believe it!  After that we just chilled at the feeder area the rest of the time, enjoying the Chachalacas, Cardinals, and eventually the female Black-headed Grosbeak that had been hanging around all winter.  Suddenly Christopher announced that he had a cuckoo, and after much looking we finally spotted a fine Yellow-billed for the day! 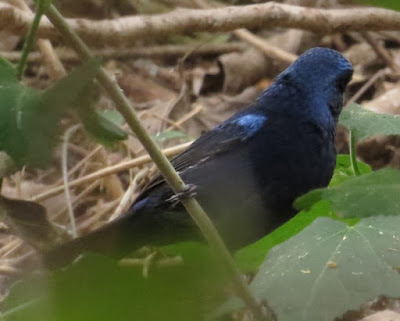 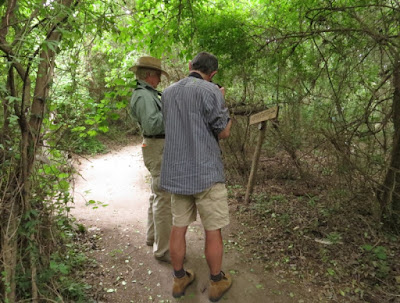 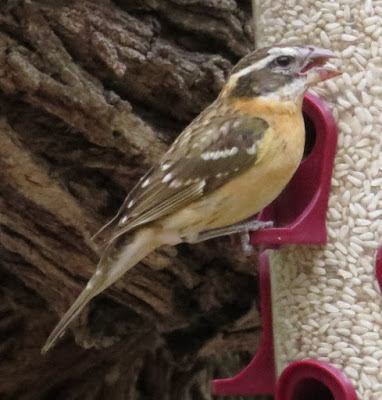 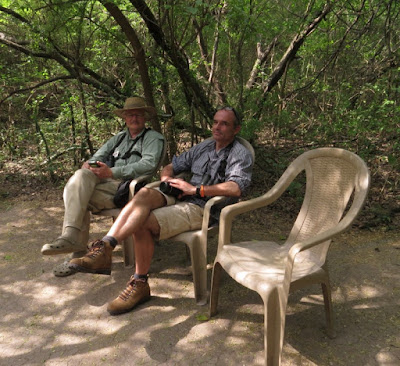 The guys chill out!
﻿


The guys had to scoot to make it to Edinburg for another engagement, so we reluctantly headed back to the parking lot, but we had logged an incredible 79 species for the day!  Bird List:

Posted by Alamo Inn BB Gear and Tours at 8:35 AM