Day One with the Great Danes - Exploring the Back Roads


We were graced for four days by a group of birders from Denmark, the leader of which, Frands Jensen, had taken Pat Heirs birding while she was in Denmark, so now she was returning the favor! J  I was along as Alamo Inn’s guide, so since the forecast on their first birding day was for rain, we figured going somewhere where we’d be in (or close to) the vehicles would be a good idea!


One of Pat’s favorite routes is FM 493 going north out of Donna, as there are very often flooded fields and bogs that have interesting birds.  But first she wanted to take the group to a grassy field next to the Wal-Mart, which often has grasspipers!  It did not disappoint, as it had several Pectoral Sandpipers and a couple of Baird’s!  Down the road at a resaca Pat spotted a Yellow-crowned Night Heron, which was definitely a hit!  One of the nearby kingbirds finally tittered, confirming it as a Tropical!  Heading north, we stopped at another field near a bar that had an Upland Sandpiper and a pair of White-tailed Kites! 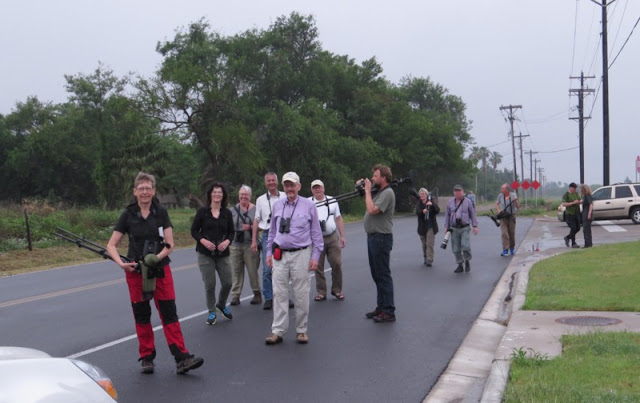 Happy group of Danes, with leader Frands in the middle (lavender shirt) and Ian, the co-leader, to the right re-checking the fields... 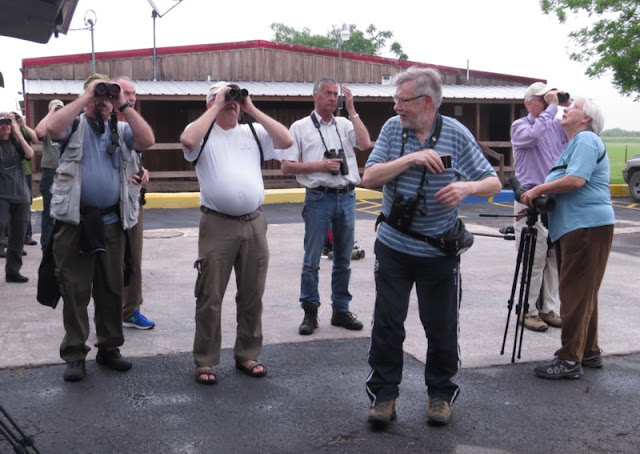 "There's a White-tailed Kite!"
﻿
Nittler Road is always worth checking, and it proved productive this day, with many avocets and stilts and several species of ducks, including some Fulvous Whistling Ducks and a very late Canvasback!  A Horned Lark was an exciting find for the group as well.  We continued east on Nittler to Delta Lake County Park (about the only restroom stop out in this “middle of noplace”), where Pat found a baby Cane Toad in the ladies’ room!  The area proved quite birdy as well, with “common” things causing a lot of excitement, such as Kiskadees, Golden-fronted Woodpeckers, and a Brown-crested Flycatcher, and a not-so-common Bullock’s Oriole along with some Baltimores!  The little skuzzy canal had a Solitary Sandpiper feeding close by. 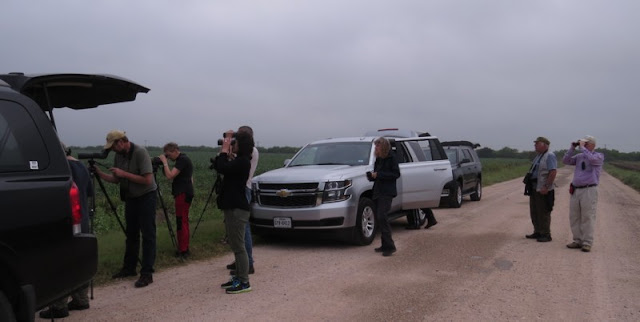 Checking out the birds along Nittler Road... 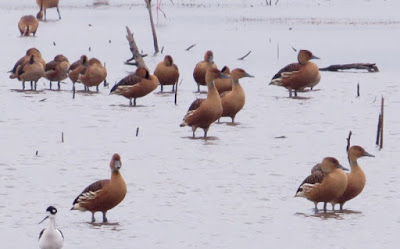 Fulvous Whistling Ducks (with a Black-necked Stilt in the foreground)

Flighty avocets with a Black-necked Stilt on the right 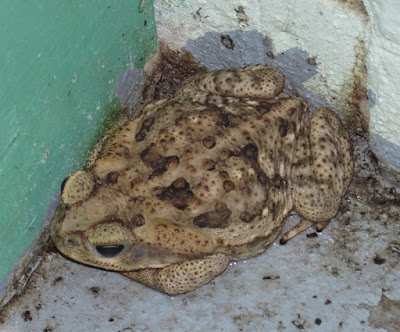 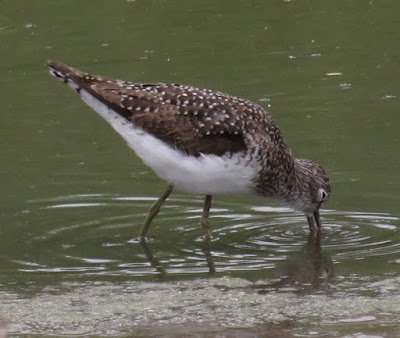 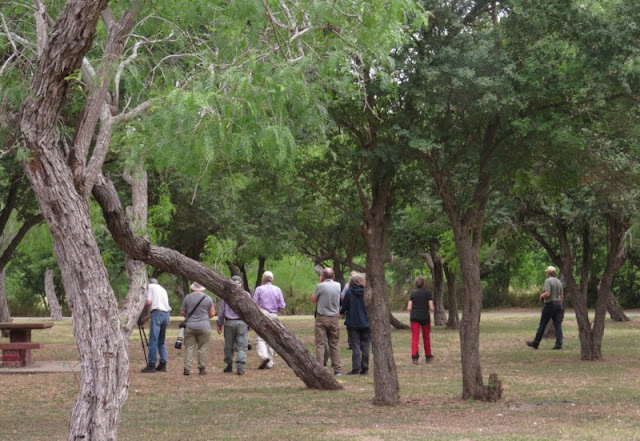 The gang at Delta Lake Park
The lake was too high for shorebirds at the pullout, so we continued up to Rio Beef Road, where a stop at the little marsh there proved surprisingly productive (only because it’s hard to see in there), with Least and Pied-billed Grebes, and heard-only Soras.  A Summer Tanager was a big hit, but like most everyone, the gang really wanted to see a Roadrunner, so a large bird on the road in front of us got us excited until we realized it was a Turkey!  (That became very exciting when we discovered a male in display just up the road!)  The group did get glimpses of Green Jays, Lincoln’s Sparrows, and the like, and a picnic lunch near the stockyard (they said they didn’t mind the smell J) enabled us to enjoy Scissor-tailed Flycatchers, along with a Bewick’s Wren we finally got to come out!  The gang decided to take a walk down the road while Pat and I stayed behind and chatted with one of the participants who also decided to stay behind and pondered over this pretty purple plant; after posting it on Facebook my friend John Brush identified it as a Silverleaf Nightshade! 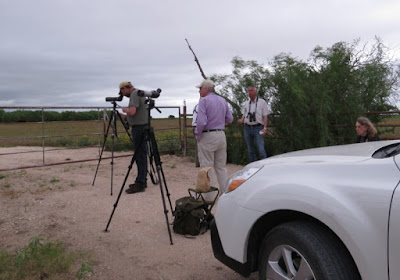 Pat chats with one of the participants while the rest poke along Ken Baker Road in search of brushland specialties... 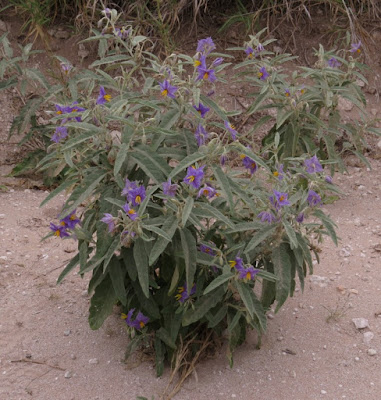 Silverleaf Nightshade
From there we took Brushline north to its terminus, and at one spot where we stopped to try and pish something out (probably either a Verdin or a Pyrrhuloxia, as both were proving elusive), their co-leader Ian spotted a Roadrunner by the side of the road!  Unfortunately only a few people saw it before it slunk into the bushes, but Ian tried valiantly to herd it back out, to no avail…  We continued on, hoping to get something good in the farm pond, which we did:  a late pair of American Wigeon!  Somewhere along the drive we also managed good looks at White-tailed and Swainson’s Hawks, along with plenty of Caracaras.


The last stop was Hargill Playa, where viewing was tough, but a cute little Snowy Plover did show itself on the close shore!  We also managed to log Gull-billed Terns, and Ian managed to find an American Golden Plover!  (He couldn’t find Pat her county Dunlin, however… J)  Ian also zeroed in on one of the local Wilson’s Plovers, which most of us couldn’t find… 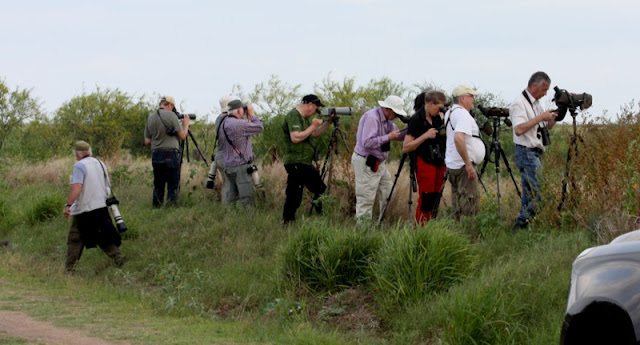 Scrambling up the berm to view Hargill Playa
The total group list was probably different than mine (below), but I ended up with 98 species for the day!