Another Taste of Migration


The Big Storms didn’t materialize down here like everyone thought, but since we did have a big thunder-boomer the night before, I figured we might have fallout conditions at South Padre, so after picking up Sharon we headed out!  Aplomado Falcon was big on her wish list, so we made a brief stop at the Blue Shack along SR 100, and thankfully there was a falcon perched on a power pole not too far away!  Whew!


Headed on to the Convention Center after that, and I was honestly surprised that the place wasn’t packed after yesterday’s rains!  While there weren’t “tons” of birds (I think that big fallout three years ago spoiled us J), there were good numbers of Baltimore Orioles and Indigo Buntings, and Yellow-headed Blackbirds almost outnumbered the Redwings!  Quality was certainly present, as both a male and female Western Tanager appeared right away, and a little later a Bobolink teed up on top of one of the trees and then took off for the marsh!  A vireo in terrible light kinda struck me as a Red-eyed, and thankfully Jan Dauphin, another Valley birder, saw it at a better angle and confirmed it!  J A lovely Rose-breasted Grosbeak came in, and a handsome Northern Parula posed over the water feature and sang!  The back area had several Black-and-white and Black-throated Green Warblers, along with a couple of “western wanderers”:  a male Bullock’s Oriole and a stunning male “Audubon’s” Warbler!  A Painted Bunting posed over our heads, and another “most wanted” bird for Sharon, a Dickcissel, fed among the pigeons and Collared Doves!  A visit out back produced nothing as the tide was up to the brink (and we all watched with anticipation as a guy in a pickup who had gotten caught by the tide tried to drive out of it…).  Sitting on the “tucked away bench” in the southwest corner of the “Secret Garden” bagged us a Gray-cheeked Thrush along with great looks at all the buntings coming in.  We checked the boardwalk and managed to flush the female Least Bittern and were entertained by a tame Sora, but only heard the Clapper Rails.  Back at the Center we circled the “outer bushes” near the parking lot as they often have good stuff but are not visited as much by birders, and found the continuing female Pyrrhuloxia feeding with some Chipping and Clay-colored Sparrows. 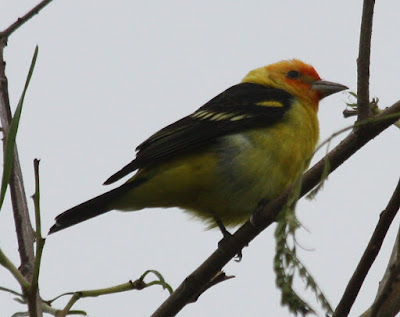 Western Tanager, an annual vagrant in the Valley 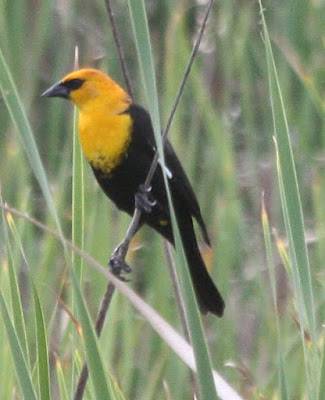 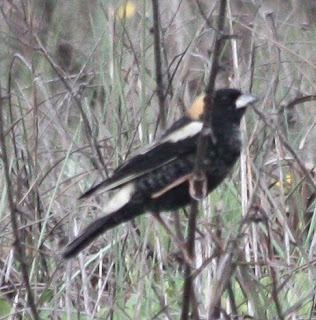 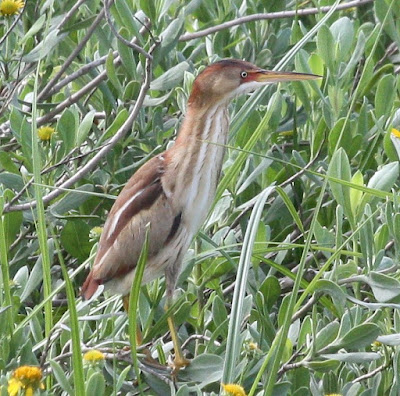 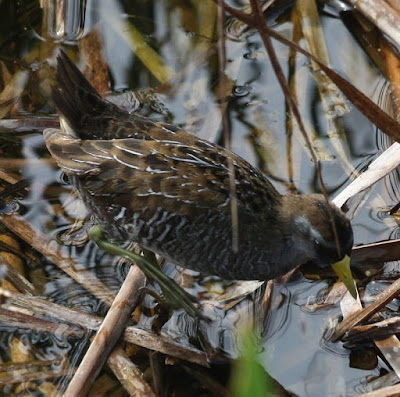 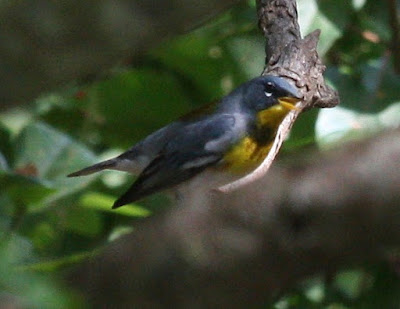 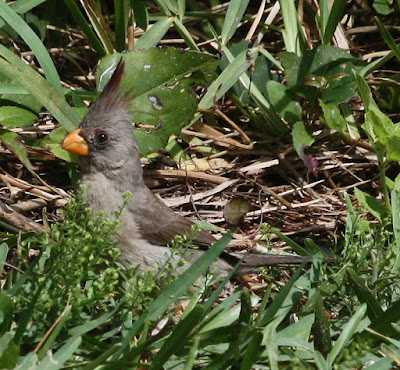 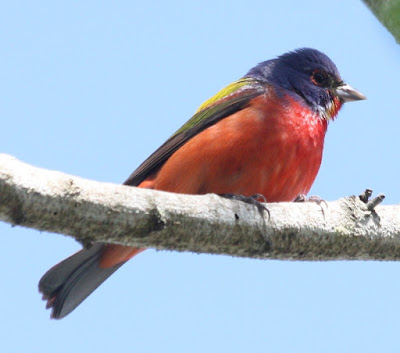 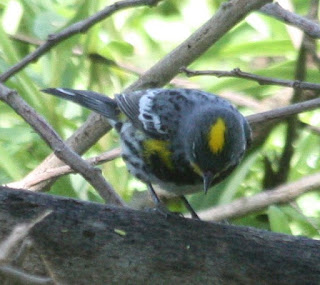 "Audubon's" Warbler, rather rare on the coast
From there we headed over to Sheepshead, and that’s where all the excitement was:  right away Mary G. alerted us to a Kentucky Warbler that was hanging around the sunny north side, but later what may have been the same bird came in to the drip on the shady south side and proceeded to give everyone a great show by taking a bath! J  The Cape May Warbler (a vagrant in the Valley) shortly showed up, along with Worm-eating, Chestnut-sided, Wilson’s, Blackburnian, more Black-and-whites and Black-throated Greens, and a Northern Waterthrush!  Non-warbler goodies included a molting Summer Tanager that had a rather interesting pattern, a Warbling Vireo that several were trying to turn into a Philadelphia, and several Swainson’s Thrushes. 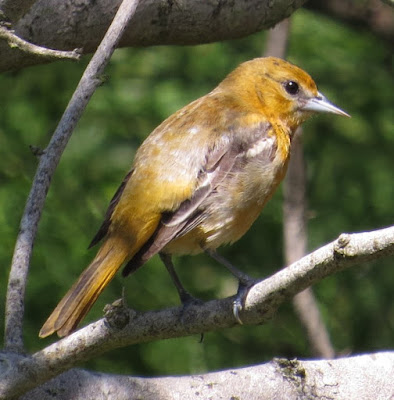 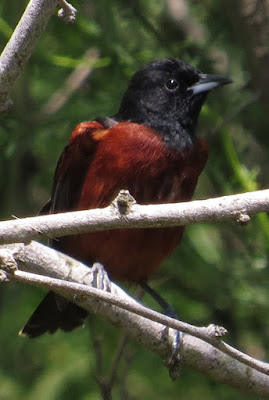 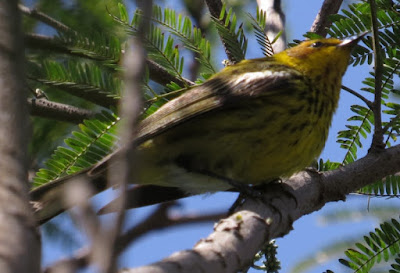 Cape May Warbler, also a vagrant 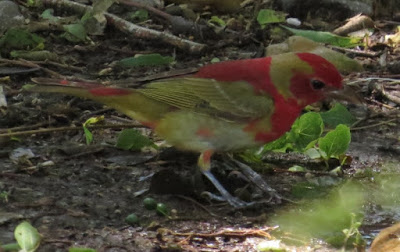 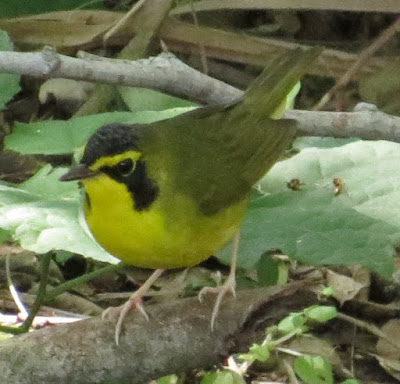 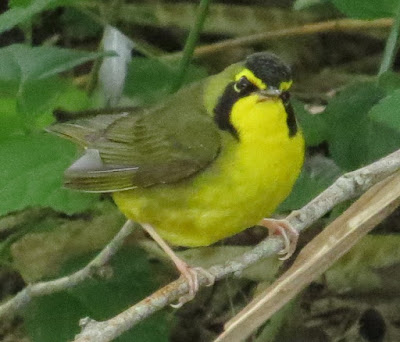 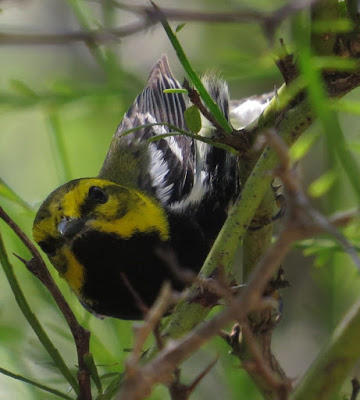 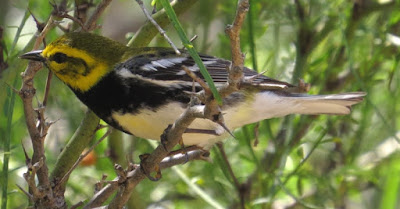 Sharon’s most “most wanted” bird, however, was a Roadrunner, so from there we headed up to Laguna Atascosa.  Even the Eastern Meadowlarks were new for her, and she was delighted to finally get a look at one facing her!  Lark Sparrows were also plentiful, and I was once again reminded of how easy it is for us to take such a striking bird for granted!  We did well in the raptor department along Buena Vista, picking up pairs of White-tailed Kites and Harris’ Hawks, plus a White-tailed Hawk making his getaway with lunch.  Unfortunately no Roadrunners were to be had along the entrance road, so we parked at the Visitor’s Center and checked out the photo blind.  Thankfully another “want bird,” the Green Jay, didn’t disappoint, as several hopped around getting drinks, raiding the hummingbird feeder, and tussling amongst themselves!  Even the Bronzed Cowbirds put on a show by performing The Helicopter, a fascinating display wherein the male will hover motionless over the female for several seconds before landing and doing the Darth Vader puff-up!  On the way out we were blocked by some very dead-looking Chachalacas that were sunning; they certainly didn’t want to move and ended up “accompanying” us to the Kiskadee Trail! 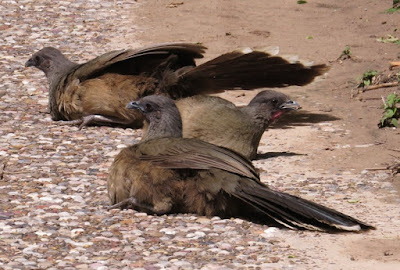 
On the way one of the rangers (Daniel Rivera, I was to discover) called us over to see a snake eating a lizard!  The snake was a Ruthven’s Whip Snake, and his lunch looked like a Texas Spotted Whiptail (probably the most common lizard we have)!  The lizard was still very much alive as the snake had him by the side of the neck, but the snake finally wore him down and swallowed him head first…  On the trail we tried to pish out an Olive Sparrow, but I knew that was a hopeless cause… J 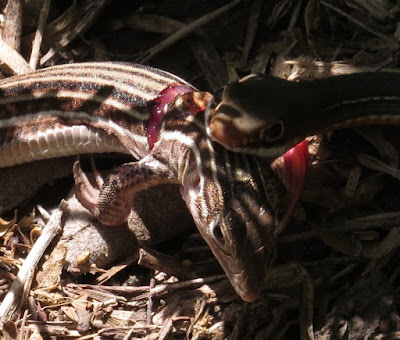 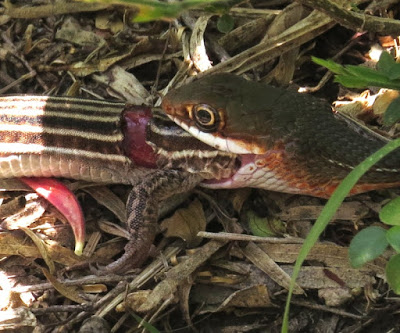 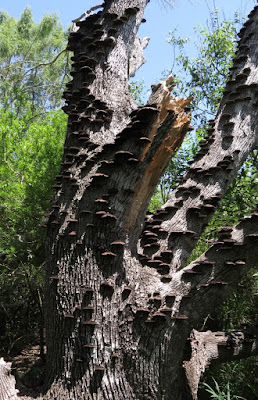 Interesting fungus covers a dead tree on the Kiskadee Trail


After cooling off in the Visitor’s Center we drove down to Osprey Overlook in hopes of scaring up a Roadrunner; it was pretty dead by that point, and as I was turning around to leave, what should suddenly pop up but the Roadrunner!  As I’ve confessed, I can’t help messin’ with Roadrunners, so I cooed at it, and he answered back and came closer, but I think “he” was really a “she”, because another Roadrunner also answered on the other side of the car, and Sharon excitedly said, “There he is, out in the open!”  Sure enough, this guy had a very bright red-and-blue ear patch, which I understand is indicative of a male (the other bird’s ear patch was quite dull).  Talk about the 11th hour!! 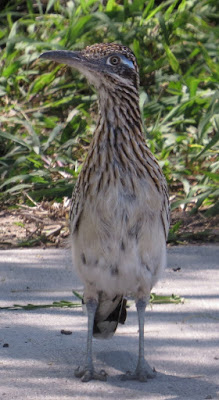 A lady Roadrunner comes to investigate, along with her mate (below)! 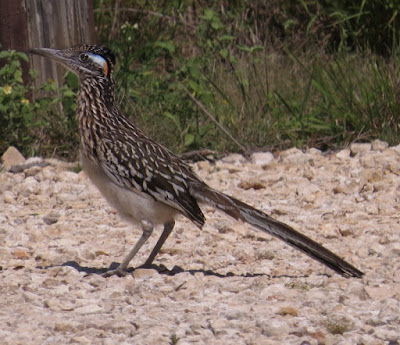 We headed back after that, but the excitement wasn’t over: on the way down Buena Vista Road, Sharon spotted a sparrow with a “very yellow breast,” which turned out to be a Grasshopper Sparrow (two of them, in fact)!  She got a kick out of their song, which truly does sound like a grasshopper!


I wasn’t sure we’d break 100 with relatively few shorebirds on the list, but we certainly did (granted, many of them were heard-only that Sharon never got to see… L)!  Bird List: