Mary and her husband live in the Corpus Christi area, so she’s no stranger to Valley birds, but when her husband suggested she come with him to a conference he was speaking at on South Padre Island, she readily agreed and looked me up to go birding!  The timing couldn’t have been better, as a mild cold front came in the day before, and the Convention Centre (CC) was dripping with migrants!  (We would hear throughout the day that the whole Valley was dripping with migrants!)


But I’m getting ahead of myself:  we first went to the bayside flats north of the CC, and unlike Saturday, the tide was right up to the entrance kiosk, so we didn’t have much in the way of shorebirds and larids except for a couple of Ruddy Turnstones, a Sanderling, a Reddish Egret, and a couple of Royal Terns making more Royal Terns (although a late Red-breasted Merganser was nice)…  So we swung over to the CC, and had barely stepped out of the car and onto the sidewalk when we were greeted by several warblers right overhead, the memorable ones being Blackpoll and Blackburnian!  Mary got on a Chestnut-sided that I missed, but I didn’t miss the male Bay-breasted!  Ran into Scarlet Colley at the water feature, and as we talked, some Cedar Waxwings started calling from the tree tops!  Her “Orange Trees” were loaded with mostly Baltimore Orioles and a few Orchards; it was a great opportunity to study the different plumages!  Eastern Wood Pewees were out the yin yang, but nothing was out in the back area this time as the tide was so high.  From the “tucked-away bench” we saw several variations of Indigo Buntings coming in, and Gray-cheeked and Swainson’s Thrushes gave good comparisons.  Even the beginning of the boardwalk was great, as a Black-billed Cuckoo sat briefly and then flew to a tree further out on the boardwalk; this was a lifer for several folks there!  We also were thankfully able to refind the baby Least Bitterns, and on the way back one of the Clapper Rails was vigorously preening itself out in the open!  Coming back to the CC we had a great view of all the Yellow-headed Blackbirds sitting in the tops of the trees! 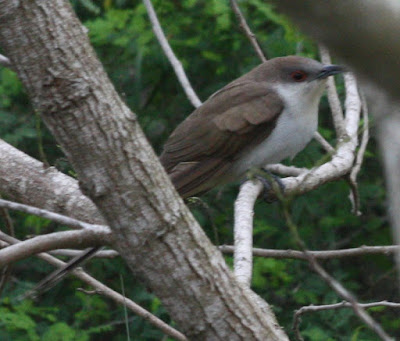 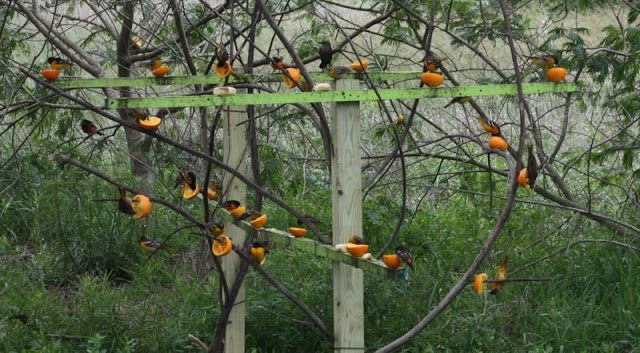 Before heading to Sheepshead, we made a circuit around the “circular area” (the area of smaller bushes east of the drive) and saw a few things, best of which was a cute Veery and a stunning Worm-eating Warbler!  Heading over to Sheepshead, we were thankful for the cloud cover as we could spend extended time on both sides of the road, but we first staked out the “shady side” where the ever-present Northern Waterthrush was, plus a Black-throated Green, but not much else.  The “sunny side” was actually more active, with a female Hooded Warbler, more orioles, and a Blue-winged Warbler!  Someone pointed out a snoozing Common Nighthawk, and down at the corner a couple of Philadelphia Vireos came in, along with more pewees. 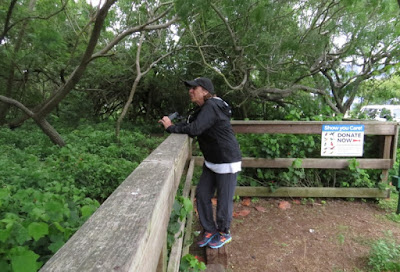 Mary checks out the "shady side" 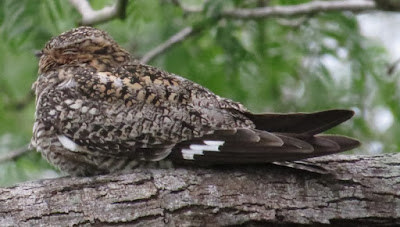 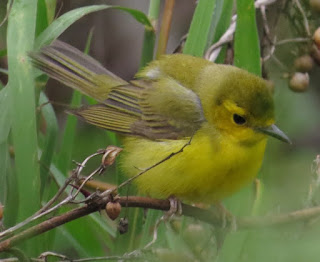 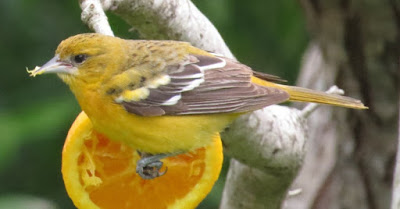 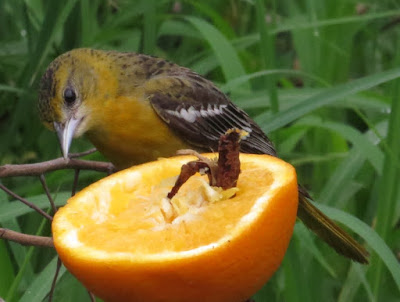 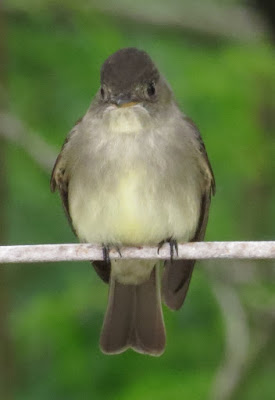 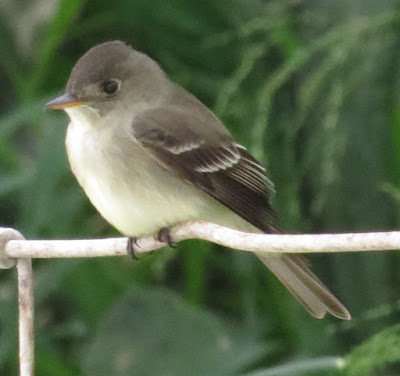 After that we headed back to the CC, where the big show was at the water feature where everyone avian was taking a bath:  Rose-breasted Grosbeaks, Nashville and Yellow Warblers, Catbirds, and even the female Pyrrhuloxia!  A very friendly Acadian Flycatcher came by to say hello, and several American Redstarts flipped around as well.  Lizzy (Scarlet’s assistant) almost fainted when a Golden-winged Warbler showed up; thankfully Mary got to see that one!  Scarlet told us of a place where she had seen some Mourning Warblers on Atol, so we headed over there, but only got several Magnolias (which are nothing to sniff at, either…).  We returned to Sheepshead where another lady told us that the Birding Center was hopping, so with what little time we had we headed over there, where yet another Black-billed Cuckoo showed up (along with a Yellow-billed), and probably the star of the day, a male Cape May Warbler! 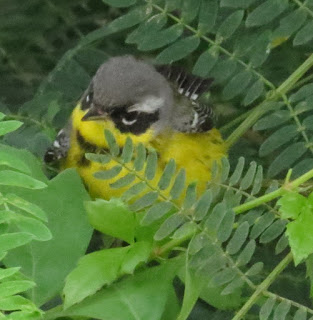 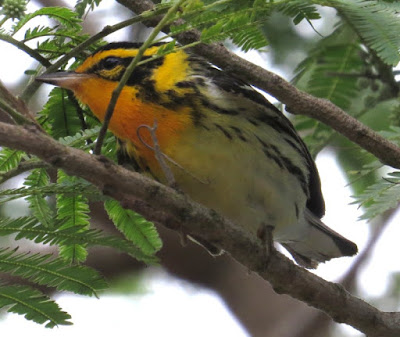 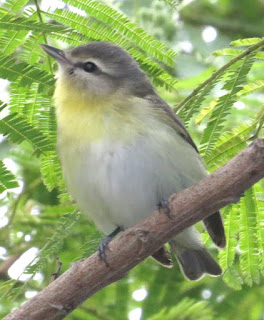 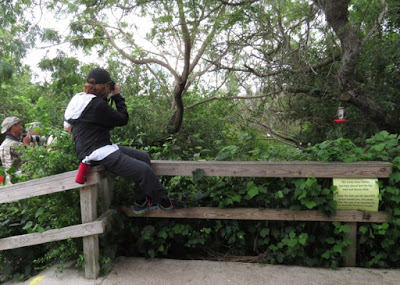 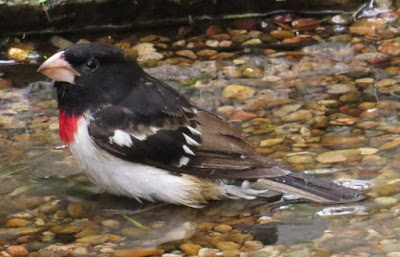 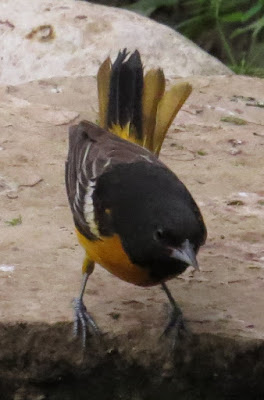 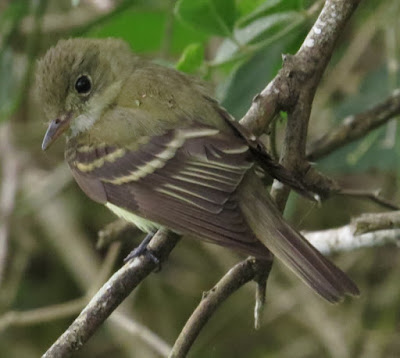 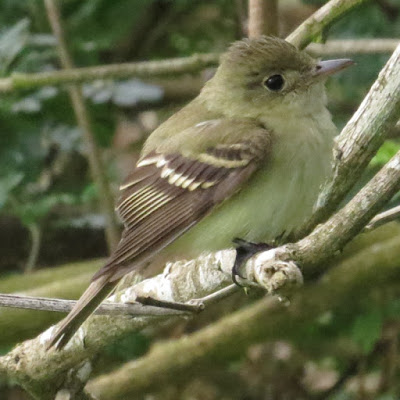 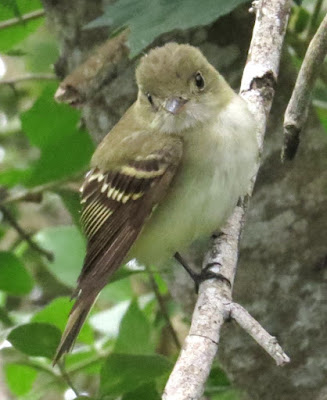 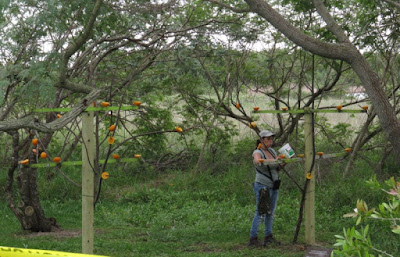 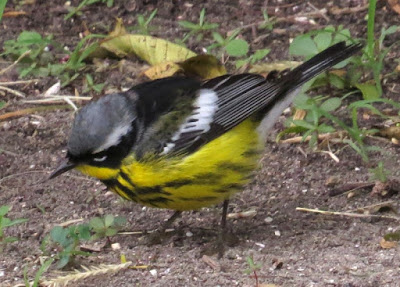 Another Magnolia Warbler over at Atol 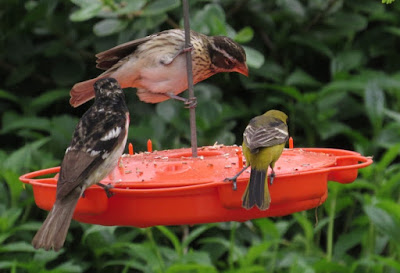 Rose-breasted Grosbeaks and an Orchard Oriole raid the feeders at the Birding Center! 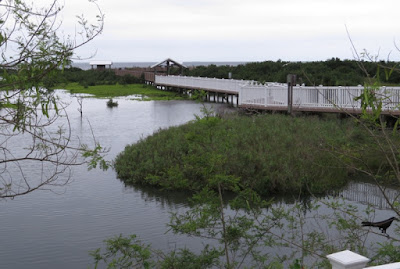 View from the ramp 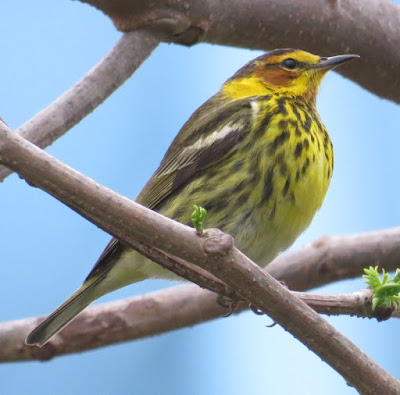 Cape May Warbler, somewhat rare on the Texas coast 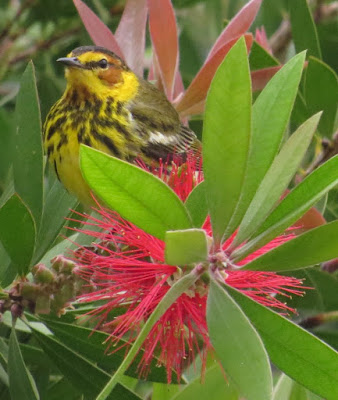 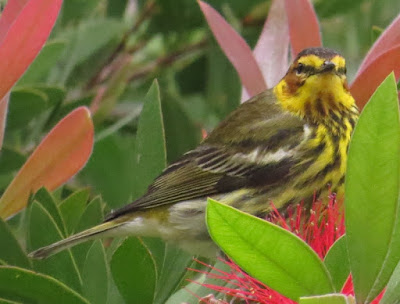 I had to drop Mary off after that, but it had been an incredible day; the only thing that kept us from breaking 100 was the lack of shorebirds!  Bird List:

Posted by Alamo Inn BB Gear and Tours at 2:54 PM