Birthday Bumming on the Island

Kay from San Antonio (who was practically family by now J) wanted to come down to the Valley to see a friend and celebrate her birthday, so she wanted to go to the Island to see if any migrants were coming through.  On the way out there via SR 100, a suspicious light in the sky had us pull over into the Aplomado Viewing Area parking lot, but the light was simply a very bright star that was nevertheless showing a lot of refractive color through the scope!  Obviously it was still quite dark, but the glowing eastern sky dotted with black clouds was just gorgeous!

We broke with tradition and went to Sheepshead first, which was sadly pretty dead except for an Inca Dove out of the car and an Eastern Wood Pewee trying out his dawn song!  We were getting ready to move on when suddenly things started seeping and chirping, but not letting us get much of a look; Kay got a glimpse of a Yellow-breasted Chat, and I was trying to follow something that looked rather plain below and on the face, but had very strong wingbars and was chirping up a storm!  Just for kicks and grins I decided to tape the thing with Merlin, and when it immediately ID’d it as a Northern Parula, that made perfect sense (as first-year birds can be rather dull)!  Kay had what sounded like a Yellow Warbler from her description (and the chirp sounded good), and a Least Flycatcher called from the north side water feature area, but the only other bird to show up was a juvenile Mockingbird that had some kind of deformity on its bill and feet – poor thing didn’t look very well, at any rate… 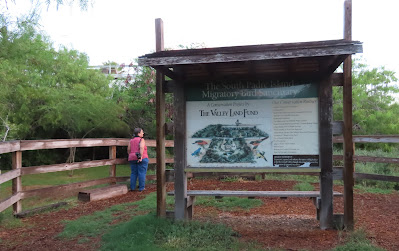 Kay at the north side of the Sheepshead Lots 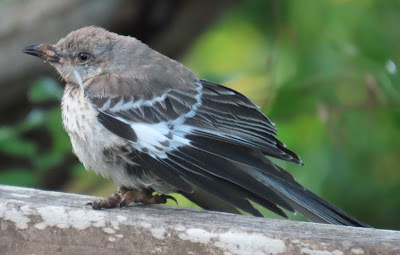 Heading over to the Convention Centre, we skipped the Circular Area and went straight to the water feature, which was also pretty quiet except for an immature Ruby-throated Hummingbird and a pair of Wilson’s Warblers that came in to bathe (I heard an Orchard Oriole, but that was the extent of that bird).  Kay was introduced to the “jungle sound” of the Common Gallinule, and we added quite a few “heard only” birds to the list including Least Bittern, Green and Great Blue Heron, Kiskadee, Tropical Kingbird, and Belted Kingfisher.  We strolled out to the back viewing area where the white morph Reddish Egret was still hanging, along with a subadult Brown Pelican, and the Neotropic Cormorant that always seems to be there, along with the requisite Laughing Gulls (the pelican seemed to be intently watching the egret as he preened J).  We tried to get a posing Tricolored Heron to look at the camera J, but he was too focused on the two kayakers floating by behind him!  We skipped the boardwalk as it was getting hot, but the most exciting bird flew over us back at the car – a Merlin!  (Guess he was a little early as he got flagged…) 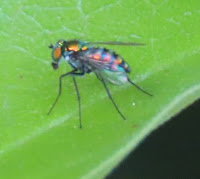 A tiny (and colorful) Long-legged Fly 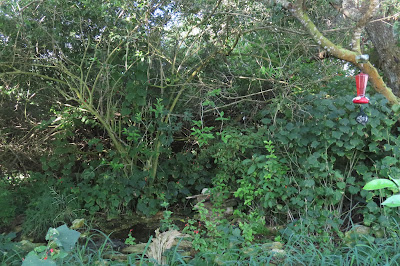 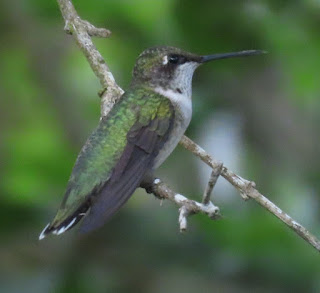 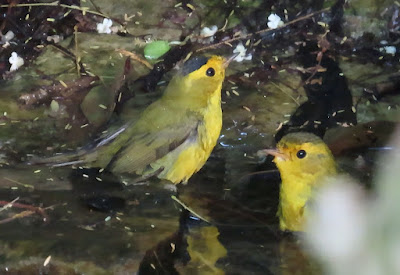 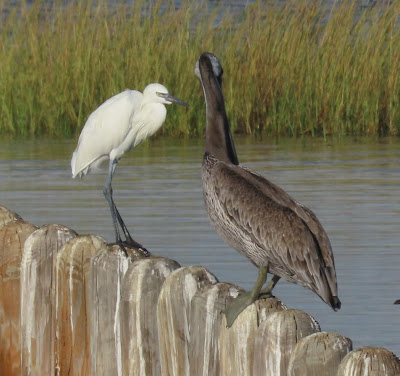 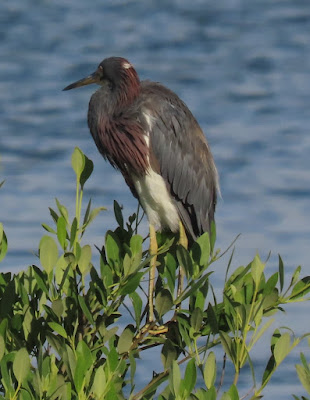 Tricolored Heron paying more attention to the kayakers than us... 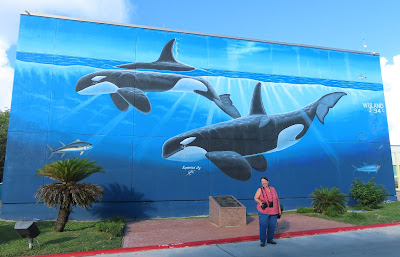 Kay in front of the "Whaling Wall"

Despite the fact that I’ve been chastised several times by my Subaru service advisor L, I decided to drive out on The Flats anyway so Kay could get a closer look at the shorebirds out there!  Black Tern would have been a lifer for Kay, but unfortunately they had moved on; we did have nice comparisons of a few Red Knots next to the Short-billed Dowitchers!  (Kay only gets Long-billed, and she could really see the difference, even though there is overlap…)  Also in the crowd were Marbled Godwits, Sanderlings, Piping (CUUUTE!!!) and Black-bellied Plovers, Black Skimmers, and the normal terns, including a Common.

Two Red Knots in front, flanked by Short-billed Dowitchers and Marbled Godwits in the back.

Kay suggested driving up the beach, so we got on via Atwood Park (as Beach Access 6 has been dicey of late), and didn’t get far as the sand was pretty soft (like driving through snow).  We had a good time joking about the truck that was piled high with water toys (“Sure you don’t wanna take a shark home?!” J), and on the way out we did see a Ruddy Turnstone, but the poor thing had no feet! L  After I got home I bemoaned the fact that we couldn’t get any farther, because a Great Shearwater was spotted in the surf about a quarter mile north of road’s end (which would have required getting on at the aforementioned Beach Access 6)! L  Oh, well…

Since it was too hot to walk, Kay suggested we just cruise around the Birding & Nature Center’s parking lot to see if we could spot anything from the car (last time she came down in the spring that proved very productive), but the most exciting bird there was a White Ibis, plus another pair of Wilson’s Warblers.  But we did foist off some birthday cake on Park Naturalist Javi J (we had been indulging all morning) and also enjoyed watching the kids from the Harlingen Military Academy helping to plant some natives on the grounds!

By then it was lunch time (despite stuffing ourselves with cake J), so after running Heppy through the car wash we headed over to Pier 19, only to discover the place had burned down!!  L  So since we were headed to Isla Blanca Park we ended up at Dirty Al’s, which was wonderful (we both had the fish and shrimp basket)!  The only new birds we picked up there were a little group of lady Red-winged Blackbirds, so we ended up with 50 species for the morning, which is kinda meager for migration time on the Island.  But we had a great time of fellowship, which is what counts! 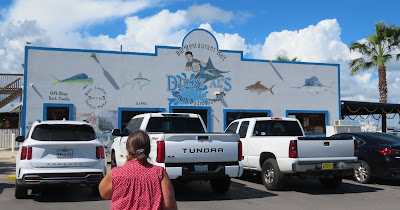