I Left My Friends in San Diego

I didn’t realize this, but it had been six years since birding buddy Phil Pryde led a small, intrepid group from San Diego to the Valley for some fun birding!  So he was antsy to come back, and I had the privilege of guiding them on one of their days in the Alamo area!

We started at Santa Ana (we drove separately, and a mix-up in communications got them down there an hour after me L), and while waiting for them to show I made several circles around the parking lot, logging the usual Valley suspects (I was really hoping for warblers as some nice ones had been reported, but nada), but I was pleased as punch to add a single Mississippi Kite that came sailing overhead!  A quick look at the blind overlooking the VC feeders only yielded a Baltimore Oriole – in the tree behind me!  A couple of White-faced Ibis also flew over, and a Yellow-crowned Night Heron called in the distance.

Eventually the gang showed up, and their timing couldn’t have been better:  a Groove-billed Ani called just as they pulled in next to me!  Kathy was the photographer of the group, but I wasn’t sure if she was able to get a picture or not as the thing kept moving left through the tree!  While still in the parking lot a female Scissor-tailed Flycatcher teed up on a dead branch next to some White-winged Doves, and a Hooded Oriole gave a good look a little closer.  I had heard a Clay-colored Thrush earlier (which is one Phil really wanted to see), but we couldn’t refind it…  Heading towards the levee, we spent a few minutes at the outside feeders that only had blackbirds, a White-tipped Dove, and an Inca Dove (Phil thought he saw a Bronzed Cowbird, which we did see on the way out). 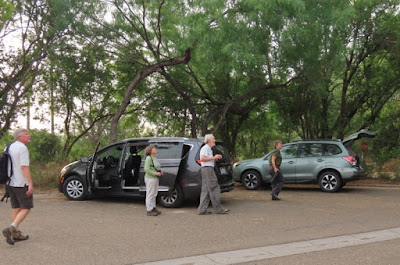 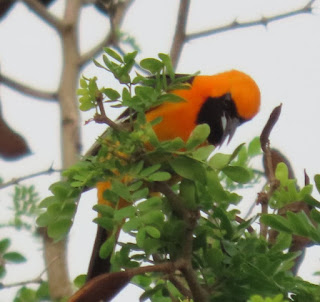 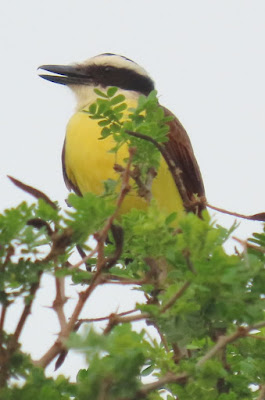 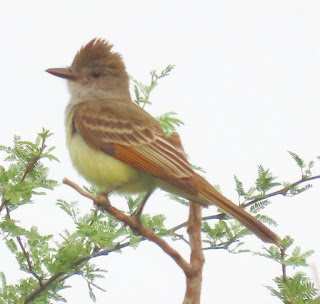 We first took the Willow Lakes Trail in hopes of finding the Hook-billed Kite, but the only raptors we spooked were several Broad-winged Hawks (a lot of immatures, interestingly).  Things were actually pretty quiet; we tried pishing out Carolina Wrens, a Blue-headed Vireo, and a Beardless Tyrannulet, all to no avail… L  But what was really exciting was the “bird-nado” of Franklin’s Gulls way overhead, and a little later a brilliant Scarlet Tanager showed off! The gang was really hoping for a Green Kingfisher, so we checked all the wetlands carefully, but none was cooperative…  Even the hooting Pied-billed Grebe didn’t wanna play ball!  (We did at least see a Least Grebe – no pun intended…)  A Marsh Wren was singing as we checked out the Blue-winged Teals in Willow Lake while Chimney Swifts chittered overhead (another one Phil really wanted J).  At a resting spot a Least Bittern cackled across the way, and coming back on Chachalaca Trail we lost Kathy, Lynn, and Jeff; turns out they flushed something that, by their description, sounded like a Chuck-will’s-widow!  We also heard a Gray Hawk whistling in the distance. 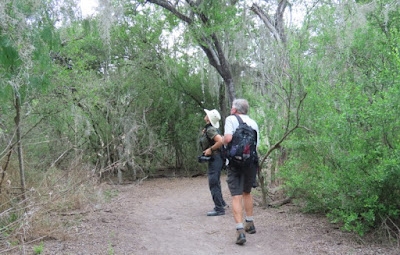 Kathy and Jeff on the Willow Lakes Trail 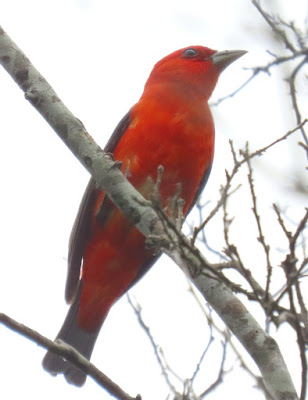 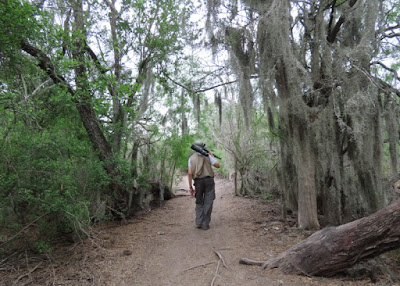 Phil carts the scope going back on the Chachalaca Trail

After finishing up Chachalaca Trail (and we did hear distant Chachalacas chorusing) we headed over to Old Hidalgo Pumphouse for another try for the kingfisher, but also Monk Parakeets.  The gate was still locked, so we had to walk through the historical pumphouse (which was fine as Jeff was a history buff; Phil went so far as to tell him we’d meet at the cars at noon in case he wanted to spend the whole time there!).  At the overlook to the channel we got three kingbird species (Tropical, Couch’s, and Western), and tried to get Phil on a Brown-crested Flycatcher that kept getting away!  A Catbird shot across the channel (I think I may have been the only one to see that one) while a Cedar Waxwing teed up on a tree.  I had heard the parakeets coming in, but we hadn’t seen any yet, so we went up on the levee (the guys took a lot of “touristy” shots next to the Border Wall J), and that’s where we got nice looks at the parakeets screeching and flying around!  After that we headed back to the cars by way of the front of the building, and there almost at our feet was Phil’s coveted Clay-colored Thrush!  Another one bounced around nearby, and as we were enjoying him, suddenly there was another Monk Parakeet on the grass!  That was a great look! 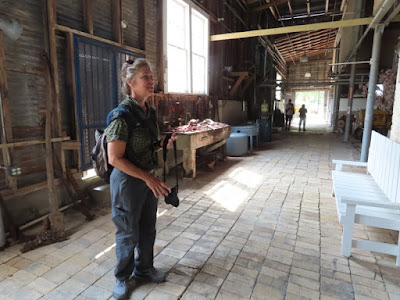 Kathy is in awe of the Old Hidalgo Pumphouse! 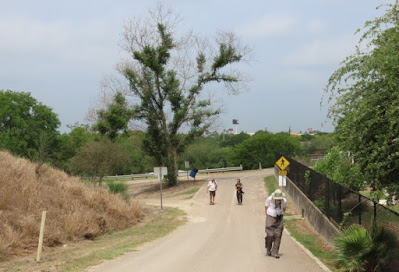 Trudging up the hill to the levee 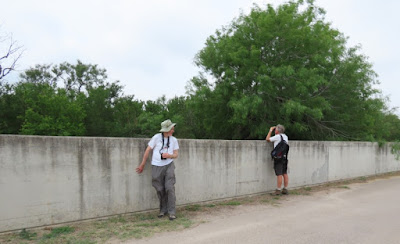 Looking for birds over the wall 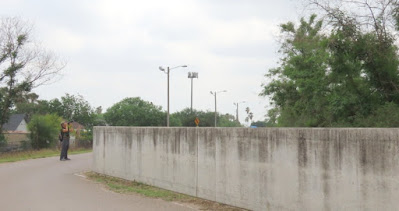 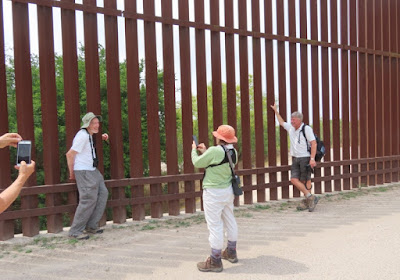 Being goofy at the Border Wall 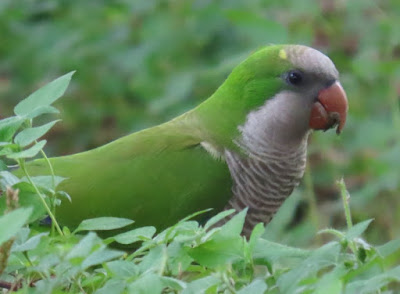 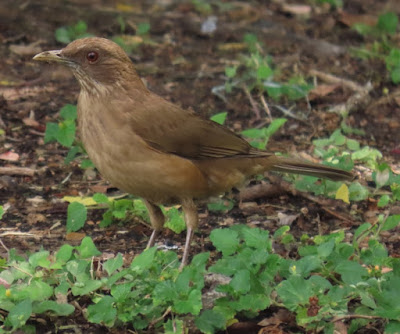 From there we came back to the Inn for a lunch break, and while the others chilled outside their rooms with their sandwiches, Phil and I went to El Dorado and caught up!  At 3:00 we met again to head to the San Juan Wetlands, and this time my friend Pat joined us!  So we swung by her place on the way there, and also on the way there I lost Phil and the crew because they had stopped for a Caracara and some Swainson’s Hawks! 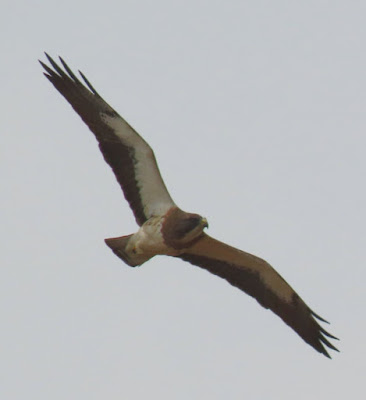 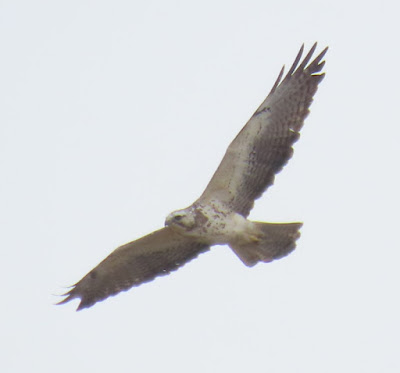 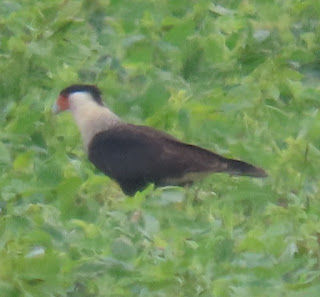 Distant Caracara in a roadside field

Continuing on, Pat was a little concerned as the last report she had heard was that there was no water in the wetlands due to the pipes breaking during the Big Freeze!  But there was plenty of water after all, and one of the first things we saw was a pair of anis fly across the pond and start making little anis! J  A couple of Green Herons were quite noisy, and along the back fence the gang flushed two Pauraques, and a third actually landed where Kathy could get a picture!  A Great Crested Flycatcher gave its strong Wheep! but of course we couldn’t find him…  On the other hand a Dickcissel sat up on a branch, and everyone got great looks at a Couch’s Kingbird.  When things got boring a pretty Thornbush Dasher stirred things up (even the non-dragonfliers were impressed with that one J)!  A Killdeer got upset with us on the way out, but sadly, the Green Kingfisher turned out to be a nemesis bird; I was hoping they’d pick it up later as they still had a couple of days on their trip without me! 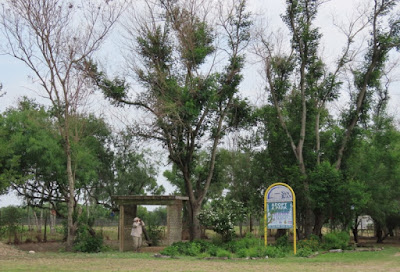 Pat checks things out at the San Juan Wetlands! 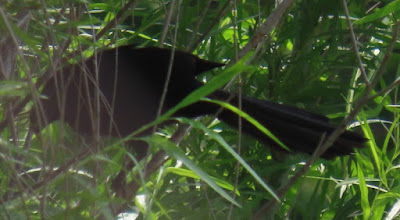 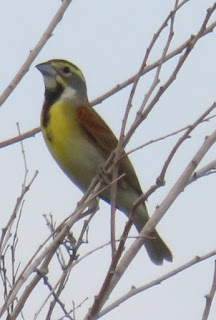 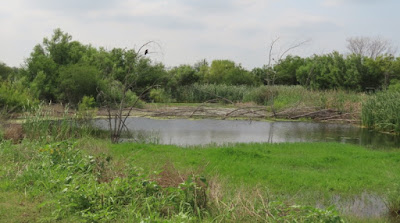 One of the wetlands 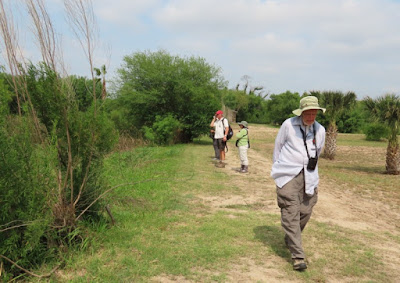 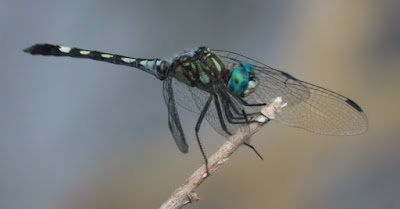 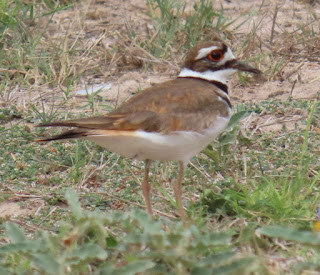 [Ed. Note:  Here’s Phil’s comment on the bird in the trip list he sent out to the participants:  “No Green Kingfishers!  Grrr.  Bad kingfishers, bad!  Blame the drought; no H2O, no kingfishers…”]

For our day’s list, we had 76 species, some of which I think I was the only one to see…