Daryl, a retired computer programmer from Sequin, had won a certificate for a half day’s worth of guiding, but extended it to a full day so that we could hit the Island and photograph migrants!  He was a serious nature photographer, with published photos in Texas Parks & Wildlife publications as well as Texas Highways, and had actually visited the Valley before and gotten some knockout shots of some of our specialties, but the challenge of photographing some of our migrants sounded great to him!  His MO was to camp out at an “attractant” as he called it, and just let the birds come to him, so initially I thought going to a friend’s house where she had a wonderful setup would be fun!  Only she reported that things had actually been pretty slow at her place all week, L  so with reports of good migrants “happening” at the Island, we decided to go there.

Daryl had never been out on The Flats, so I told him we’d take a look, and if I could get him close to the birds without having to get in the water, we’d do that!  (My service advisor at the dealership had chastised me more than once for that, as my whole undercarriage was already rusted out… L)  The tide was pretty high, but there were a handful of things within photo range, such as Skimmers, Royal, Caspian, and Least Terns, and a couple of Sanderlings as well as the ubiquitous Laughing Gulls.  Daryl tried for a couple of skimming shots without success (the gulls got in the way J), so we quickly headed over to the Convention Centre next door, which was a new place for him. 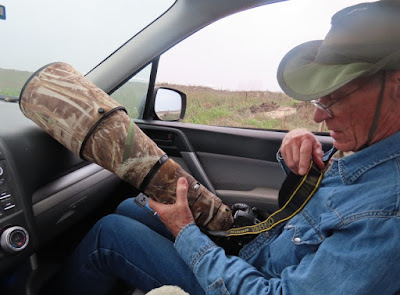 Daryl readies his own version of The Monster 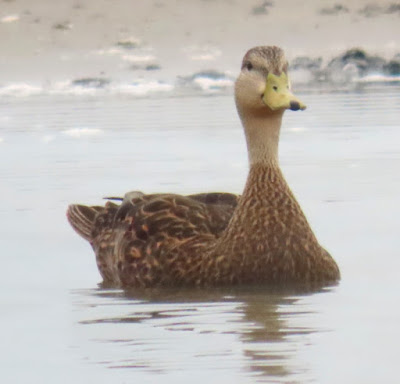 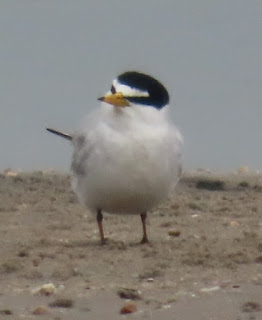 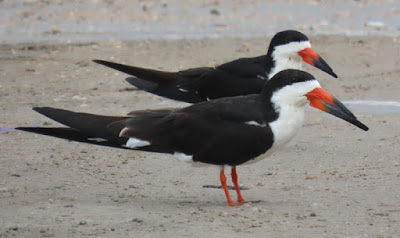 After parking and getting our gear out (during which the Sedge Wren was still singing in the grass), we headed back towards the building where I showed him the lay of the land, and gave him the option of setting up where he saw fit.  A group of birders were zeroed in on this one Bottlebrush tree, where the continuing Cape May Warbler had also set up shop, so we camped out between the gazebo and the low bench and just focused on the Bottlebrush for the next five hours!  I put out some oranges I had brought along in the hopes of attracting some orioles or tanagers, and while a female Rose-breasted Grosbeak seemed to show an interest, they mainly attracted grackles (although I have to admit – they put on quite the show for us with their displays)! 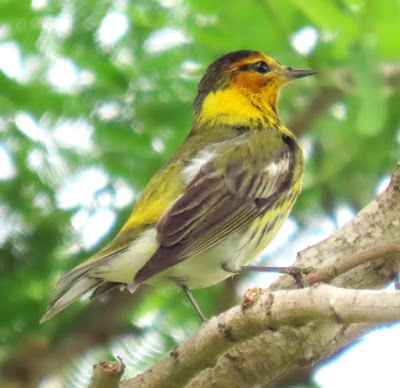 Vagrant Cape May Warbler that had the bottlebrush staked out! 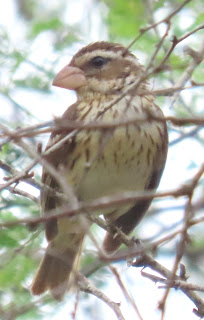 Female Rose-breasted Grosbeak looking for an "in"

While not dripping with migrants, the Bottlebrush definitely seemed to be the center of action there at the Convention Centre!  Ironically, the Cape May (which is actually a rarity here, even though it’s pretty much annual) was the only warbler for the longest time, and he kept chasing everyone else out of “his” tree!  (San Diego Jack was pretty sure there were actually two of them…)  Orchard Orioles had a decent presence there, and eventually a female Baltimore snuck in!  A Catbird stayed in the back and would pop out every once in a while, while a White-eyed Vireo bounced around closer to the southwest bench.  Tennessee Warblers started trickling in, and while he tried his best, the Cape May just couldn’t keep them all away! J  A dull female Nashville also showed up, but even better for some than the Cape May was the lovely male Blue-winged Warbler that made a brief appearance!  A stunning male Black-throated Green Warbler sat in the open, but before Daryl could get on him the Cape May chased him away… L  (That guy was a bully!!)  Many folks were trying to track down the Western Tanager, which finally made a few showings.  Three different Indigo Buntings hid in the interior of the tree, while both Ruby-throated and Buff-bellied Hummers made visits to the feeders.  A couple of Dickcissels sang their name and then landed in a nearby tree! 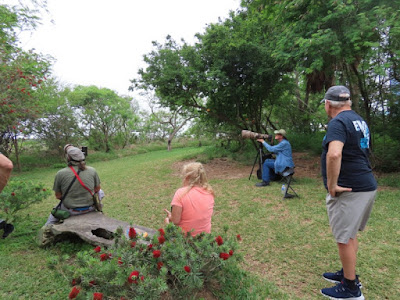 Daryl (with his Monster) and several others stake out the bottlebrush tree! 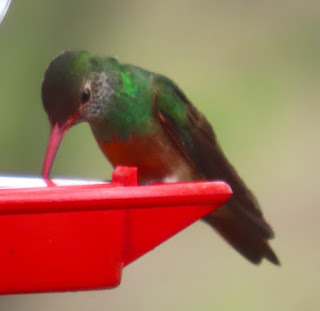 Buff-bellied Hummingbird, less common on the Island than the migrant Ruby-throated 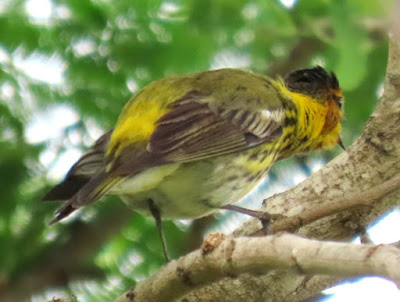 The Cape May prepares to fend off an intruder... 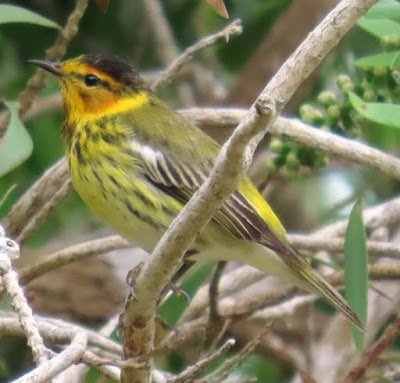 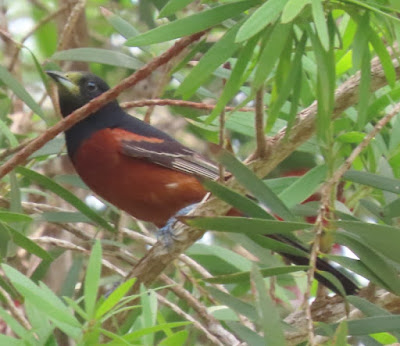 Male Orchard Oriole with pollen on his forehead! 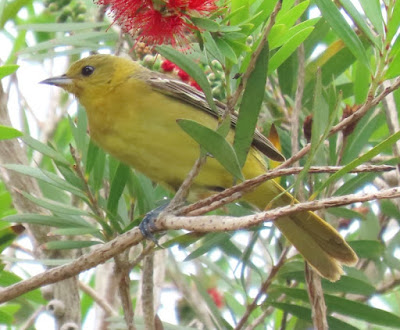 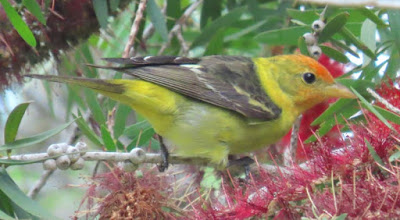 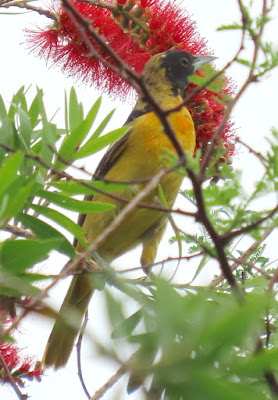 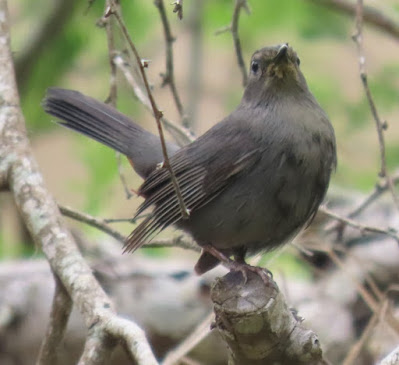 Daryl was a trooper, but my body wouldn’t let me sit on that little stool that long (too bad I didn’t even think of pulling out “Howard’s” fold-up lounge chair until it was too late L), so I had to get up periodically and walk “around the block”; Jack cottoned me onto a Veery that was hanging out at the water feature, along with the female grosbeak that was taking a bath, and my friend Ann alerted me to both male and female Yellow-headed Blackbirds that were hanging out with the big icterid flock and the whistling ducks on the lawn closer to the overlook (picked up some Neotropic Cormorants for the day while back there)!  An orange behind us attracted a male Northern Parula, and when I offered to go back to the car to get our lunches around 11:30, on the way back I was distracted by three Swainson’s Thrushes and a Hooded Warbler in the Circular Area! J 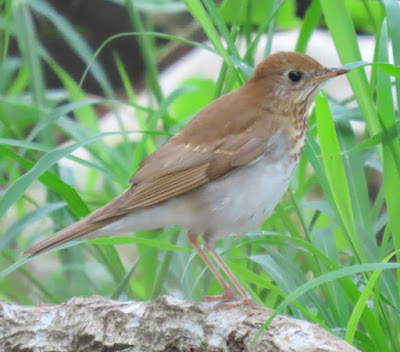 Veery at the water feature 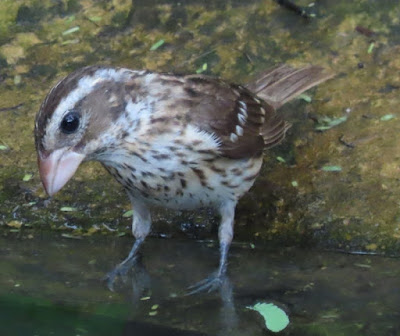 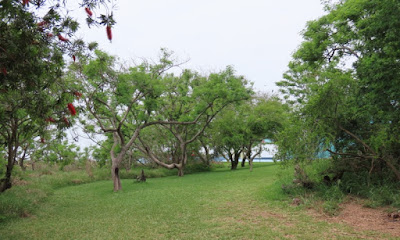 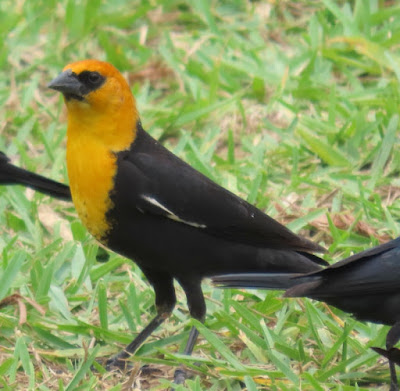 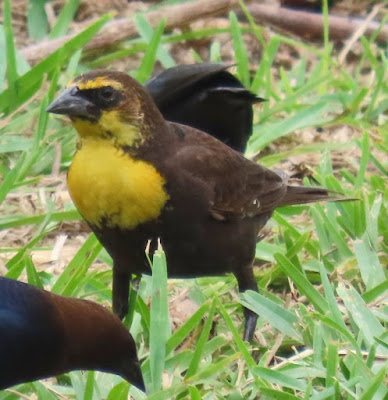 Female (with Brown-headed Cowbird in the foreground) 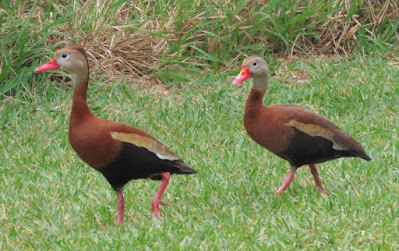 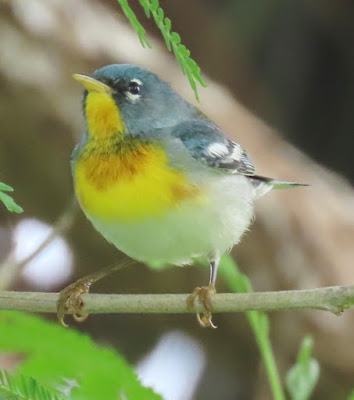 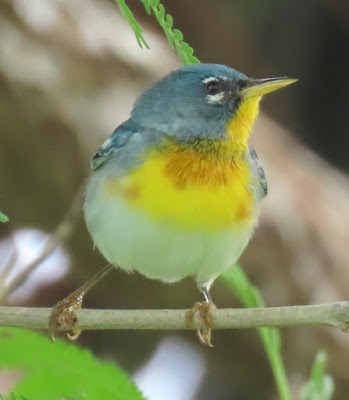 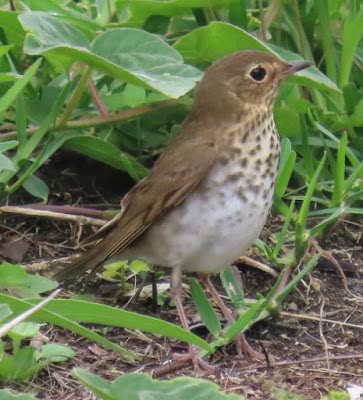 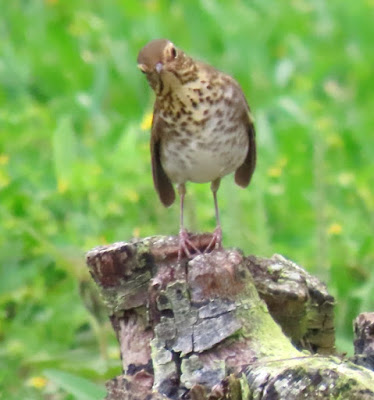 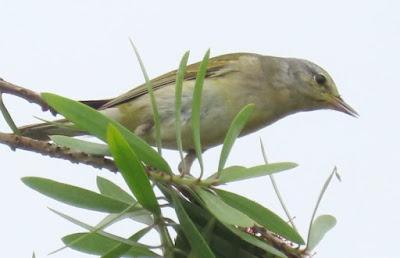 My friend Betty was the greeter over at the Birding and Nature Center next door, and all morning she was sending out alerts (that Ann and I were getting on our phones) that that the Black-billed Cuckoo was showing up over there, along with a Kentucky Warbler!  I promised Daryl I wasn’t gonna abandon him for that cuckoo J, but since a bunch of us were planning on coming back the next day, I was sure hoping he’d stick around!  Betty eventually rode her bike over and joined us, along with several locals buddies and even MB, a previous guidee! 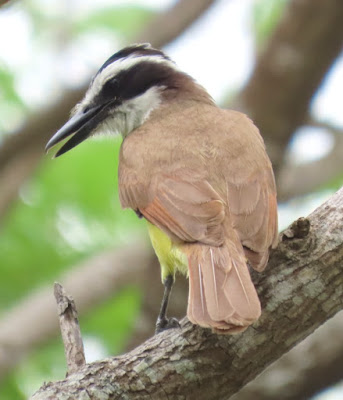 Great Kiskadee comes in for a visit 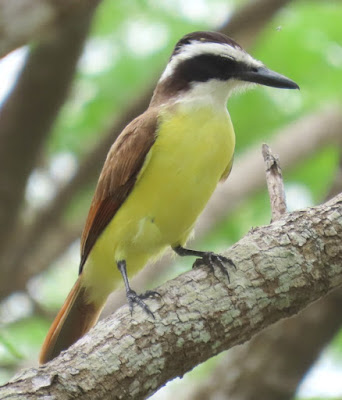 I couldn’t believe how fast the day went, as before long it was time to start heading back, so we packed up and dragged ourselves to the car and headed back to Alamo, very happy with the experience!  We ended up with a modest but high quality 42 species for the day.  Bird list: