The Gals from Galveston, Part 1

Met Jean and her crew of girlfriends (Alice Ann, Liz, and Brenda) at the Inn, and since Alice Ann had the big RAV4, we all went in her vehicle (with Liz actually doing the driving)!  They were all from the general Houston/Galveston area and were on one of their annual trips to the Valley, and just wanted to see some out of the way places, so I planned an itinerary that included a couple of private properties, and some spots that, unless you knew about them, you’d never find them!


So we started at Dan Jones’ famous yard on Moon Lake, and bagged the Black-bellied Whistling Ducks right away (they were awed at the carpet of ducks across the way, although it wasn’t as “thick” as usual), and we were able to pick up a Black Phoebe on the wire, a young night heron hiding in the trees, and had a nice size comparison of cormorants!  Dan himself shortly came out (and had actually found the phoebe, plus a female Vermilion Flycatcher), but a Buff-bellied Hummingbird delighted the ladies (that was the Bird of the Day for some J), and his Ash tree had some interesting activity, including a female Yellow Warbler!  (He had had a Pine, but that didn’t show up today…)  Sadly, the Olive Sparrow didn’t show, but the Altamira Oriole came in (Dan did a pretty good imitation J)!  One of the gals caught a pair of White Ibis flying over, followed by a spoonbill! 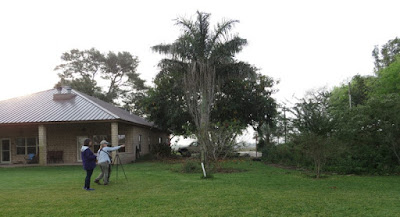 After about a half hour we packed up and headed over to the grain silos, where we didn’t have to wait long to see some spectacular Yellow-headed Blackbirds close to the road!  There were several Brown-headed Cowbirds in the mix, but we were unable to pick out a Bronzed…  A single Inca Dove on the road was our only one for the day. 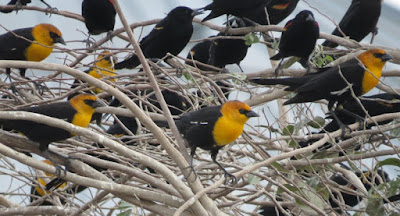 Mob of Yellow-headed Blackbirds (along with redwings) 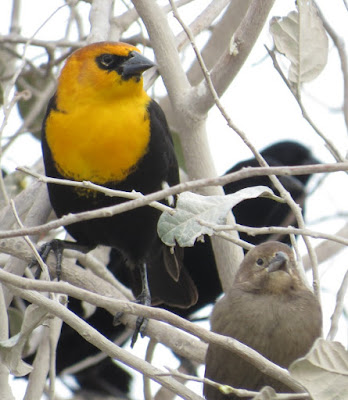 Male (with female Brown-headed Cowbird in the corner) 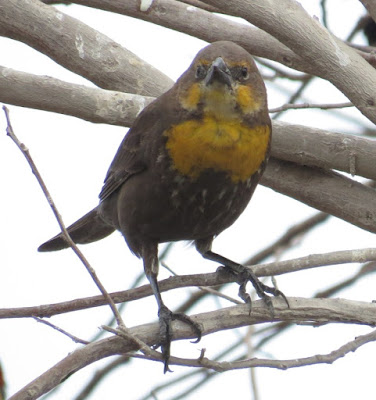 We then got out of the way of the trucks and headed up to the freeway to catch FM 1425 and head to Valley Acres Reservoir!  We took a quick look for the Fork-tailed Flycatcher, but I think it was long gone.  But once inside the compound what should show up on the fence but yet another Say’s Phoebe!  We didn’t go all the way around the reservoir, but had some nice birds right there at the overlook:  a couple of Stilt Sandpipers were in with the Long-billed Dowitchers, three Avocets stood off by themselves, and a couple of Spotted Sandpipers showed up amongst all the Leasts.  Another Roseate Spoonbill was way over on the other side. 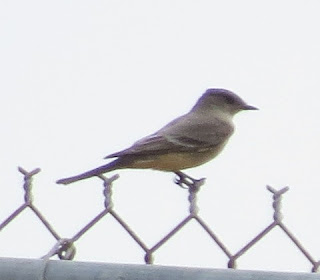 From there we made a brief stop at Sugarhouse Pond (I advised them not even to get out of the car if there wasn’t anything there, which there wasn’t), then north to cut over to FM 1015 to the famous pond behind Delta Lake.  But I had totally forgotten that we’d pass by “Tri-County Pond”, a little wet area at the intersection of FMs 1426 and 2629 (where Hidalgo, Cameron, and Willacy Counties all meet up), and sure enough, there were birds there!  Not many, and the light was awful, but they turned out to be a handful of Snow Geese (I even thought we had a Ross’ at first, but it was an optical illusion) and some Green-winged Teal! 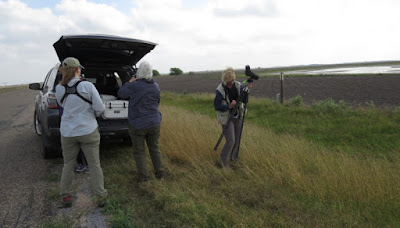 Jean pulls out the scope to enjoy Snow Geese (below)! 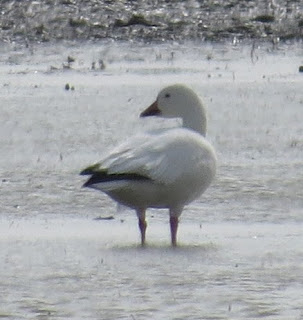 Joined by some Green-winged Teal

Continuing on, we made it to the pond, which was in wonderful light and had quite a few goodies; in fact, we thought we had a Green Kingfisher sitting on a reed, but a closer look through the scope showed it to be a Belted…  We enjoyed lots of colorful ducks (including a Cinnamon Teal), Least Grebes, and several Snowy Egrets that kept going in and out of the reeds.


From there we headed over to Delta Lake proper, where there were lots of Lesser Scaup, plus a pair of Ring-necked Ducks on the west side.  We found an Eastern Phoebe on the east side, and one of the gals actually found an adult Black-crowned Night Heron!  Several White Pelicans sailed over, which were beautiful, a Caspian Tern showed off, and a big surprise was a White-tipped Dove shooting by and into the park!  An Anhinga flew a lap over the car as we drove in! 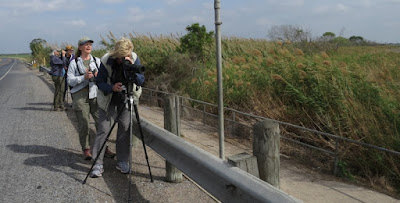 Checking out Delta Lake from FM 88

The wind had kicked up by then, so pickings in the park were slim (although we had a beautiful male Vermilion Flycatcher, and the kingbirds finally talked proving themselves to be Tropicals).  Going in we had a Great Blue Heron standing on a pipe next to three Neotropic Cormorants, but it looked like he had something protruding from his throat! L  We actually ended up having our picnic lunch in the back picnic area, which was very pleasant – we picked up Blue-gray Gnatcatcher, Ruby-crowned Kinglet, and Butterbutts back there!  On the way out we enjoyed a single Long-billed Curlew on the grass, but discovered the trail over the bridge was closed, so we walked a little along the lake edge, scaring up an American Pipit and some Savannah Sparrows, and enjoying a Nutria in the water along with lots of Shovelers and a pretty Pintail, plus another pair of Cinnamon Teal. 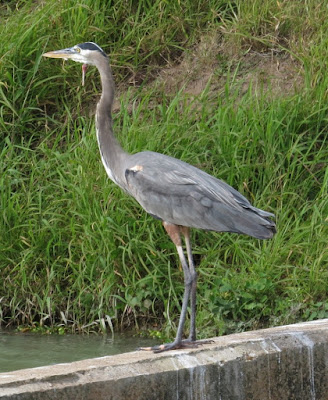 Great Blue Heron with deformity under the chin... 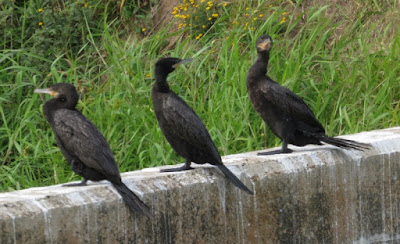 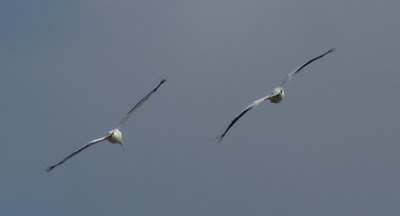 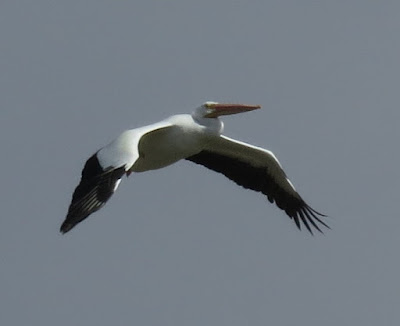 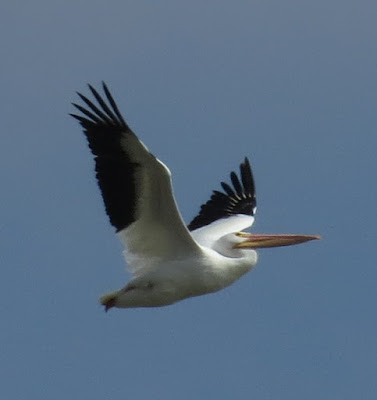 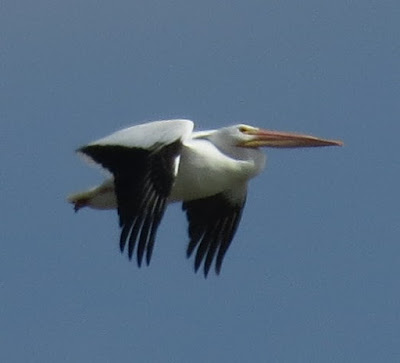 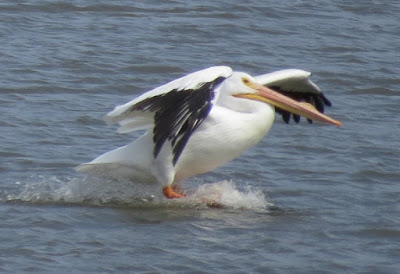 ...while another comes in for a landing! 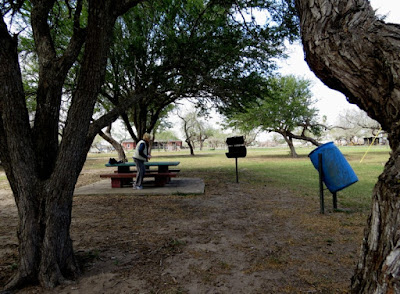 Jean and the girls get ready for a picnic! 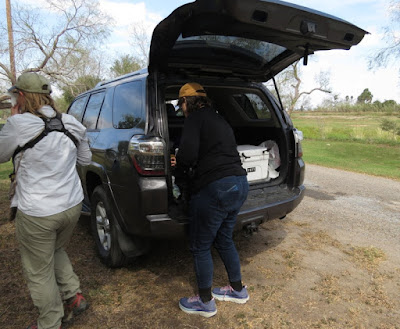 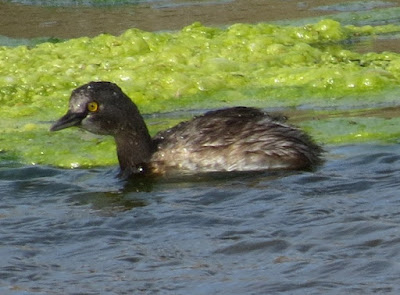 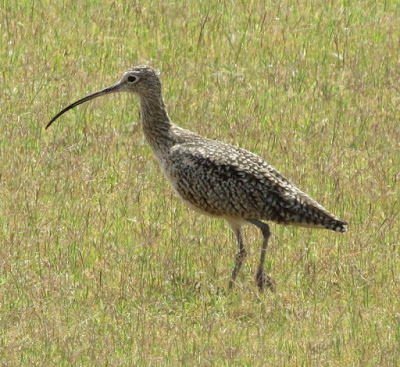 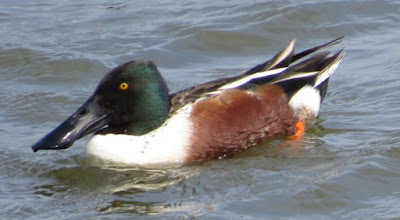 
Next stop was the Hargill Playa area, where it was tough to pick out anything (no plovers of any sort), but the highlight was a flock of 15 Sandhill Cranes in the field to the north!  That was worth the trip over!  We also had a young Caracara in the field, and yet another Say’s Phoebe along the fenceline!  But driving out, we had a better bird hop up (so far as the “wow” factor was concerned): a gorgeous male Pyrrhuloxia, a bird the girls really wanted to see!  Woo hoo! 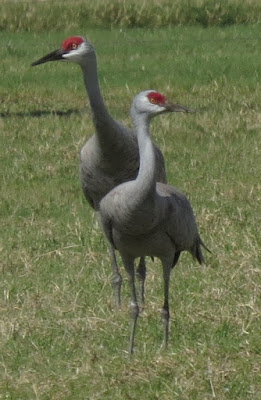 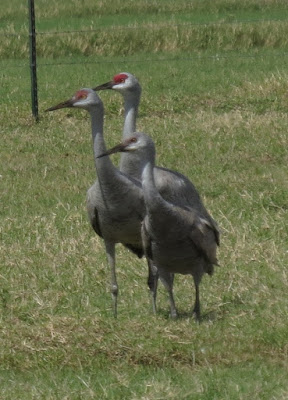 With a couple of youngsters 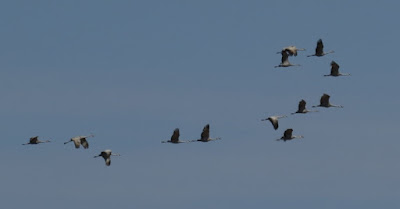 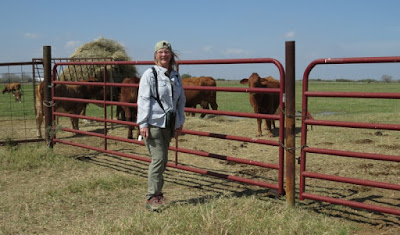 Liz making nice with the locals... From there we headed over to Brushline Road and just crawled the whole route seeing what we could see (which wasn’t much, considering the wind).  We did flush a covey of Bobwhite and spook up some Western Meadowlarks in a field, but we also had a couple of Harris’ Hawks pose!  A Common Ground Dove shot across the road while most of the girls were looking at something else, and in one of the fields, I couldn’t believe it:  yet another Say’s Phoebe was out there!  (I was beginning to wonder whether I should even keep reporting them to the RBA!) 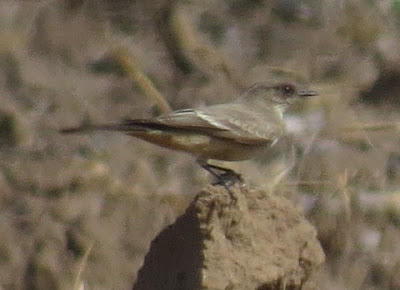 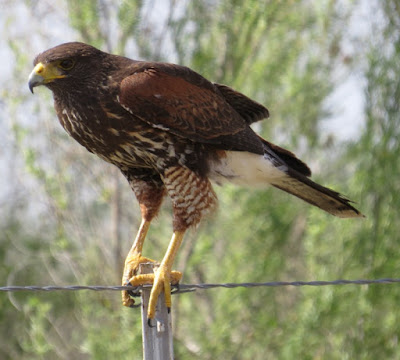 Young Harris' Hawk
North of SR 186 a Verdin was actually cooperative for once, but the Bewick’s Wren was atypically uncooperative!  We saw more Caracaras as we made our way to the big farm pond at the end of the road, where we had lots more ducks (the Green-winged Teal were particularly stunning) and both flavors of yellowlegs, plus Black-necked Stilts. A Red-tailed Hawk flew overhead causing a young Harris’ Hawk to squeal annoyedly at it!


We backtracked and then headed down Ken Baker Road, where a suspicious hawk flew in front of us, but as we tried to find it through the trees, Brenda suddenly said, “Look right here!”  There was a pair of rheas right next to the fenceline!  That was pretty cool!  (They didn’t go on eBird… J)  Several more Pyrrhuloxias popped up (along with Cardinals), and the blackbird flock at Rio Beef was tremendous, but the girls weren’t particularly inspired to go look for Brewer’s…  We did have a couple of Long-billed Curlews that were pretty impressive, however! 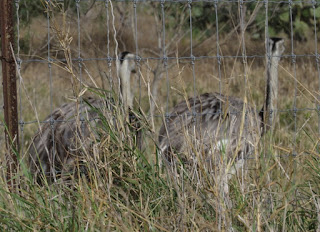 Greater Rheas on a game farm 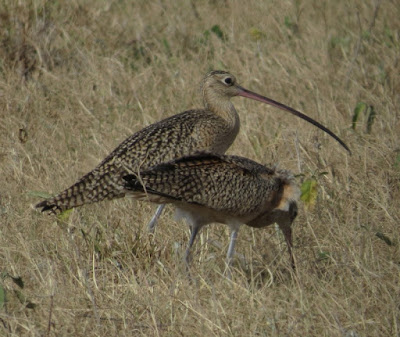 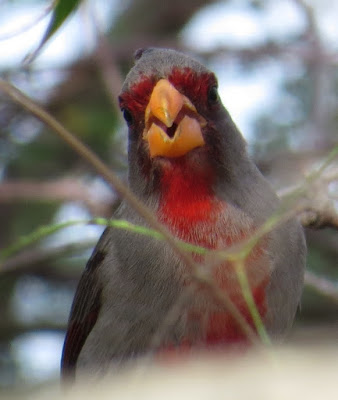 By that time we had to scoot, so we headed back to Alamo, wrapping up the day with an impressive 90 species!  Bird list: