We were all hoping the weather would clear today, but it didn’t L, so Bob Powell, Simon Kiacz, and I headed out in the mist with two van-loads of folks to see what we could find along Boca Chica Boulevard.  As expected, we ran into the construction and finally found our way to the Stripes for a bathroom break, but instead of backtracking and going south to SR 4 as the directions said, Simon suggested we go straight on Ruben Torres and make a right on Medford, and that turned out to be a great decision, as we went by a large pond that the Birder Patrol had discovered several years back that was very productive!  This time we initially found many Shovelers and Ruddy Ducks, but presently a truck pulled up next to Simon’s van, talked with him a bit, then pulled on ahead of us and turned in his driveway; he turned out to be the pastor of this retreat center on whose property the pond was located, and was inviting us to come on in!  That was really a blessing as the lady who owned the property gave us an open invitation to call ahead and come any time, and it turned out to be a terrific place:  right away a female Vermilion Flycatcher welcomed us, and from the new angle we found several Fulvous Whistling Ducks, Ring-necked Ducks, Lesser Scaup, and both grebes!  In addition some of the folks found both Spotted and Solitary Sandpipers, Gadwall, and American Wigeon, but a bright chirp in a tree turned out to be a Northern Parula!


That certainly added to the day list as we continued on to Boca Chica, where we stopped at the normal falcon viewing area just past the Border Patrol checkpoint.  It was misting again by now and pretty miserable, but we did manage to spot a “gray ghost” (male Northern Harrier) and a brown blob that was probably his mate!  We couldn’t pull out any falcons, so we continued on, stopping at one of the dirt roads that goes into the refuge proper and walking a little.  That hit pay dirt with a Groove-billed Ani that put on a show – he was definitely the star for a lot of folks!  Other dickey birds that gave brief views (or at least vocalized) included Altamira Oriole, Long-billed Thrasher, White-eyed Vireo, and a couple of Rose-breasted Grosbeaks!  A pair of Harris’ Hawks were on the nearby poles as well, and two flocks of pretty Roseate Spoonbills flew overhead.

The gang admiring a Harris' Hawk (below) along Boca Chica Boulevard 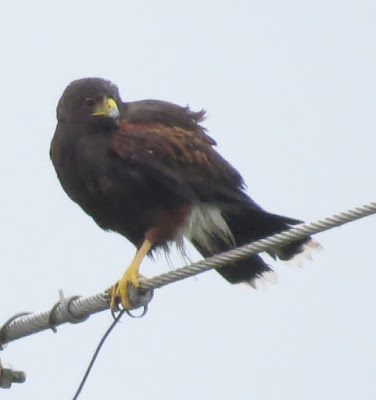 We made a command decision to head straight to the beach and then work our way back, but we were compelled to stop several times:  first for a pair of White-tailed Hawks right next to the road, then for tons of shorebirds closer to the end of the road; the light was horrible, but we could pick out Semipalmated and Snowy Plovers, Least and Western Sandpipers, Sanderlings, and a lone Ruddy Turnstone.  Horned Larks were also chasing each other around, and a white morph Reddish Egret was a distant sighting.  A Gull-billed Tern batted around, and a little further down a big pod of Avocets huddled in the cold.  Snow Geese flew by close enough to ID without bins, and several Scissor-tailed Flycatchers sailed overhead (one guy was hoping for a Fork-tailed J)! 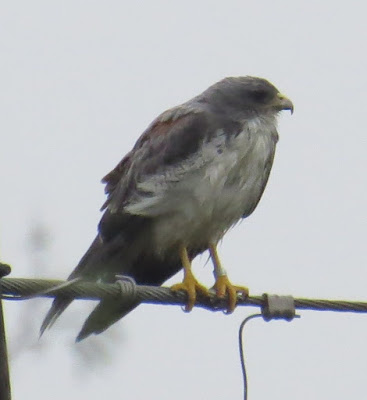 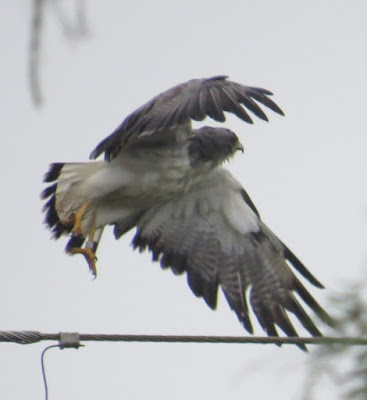 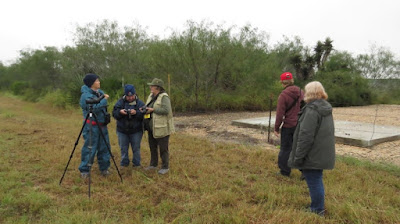 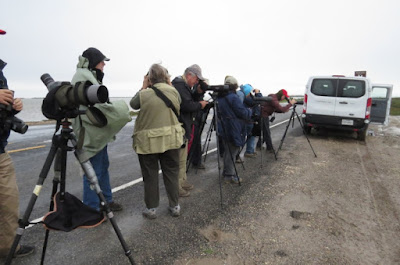 We line up to enjoy shorebirds...

...then "play in the puddles" to get the mud off our boots! 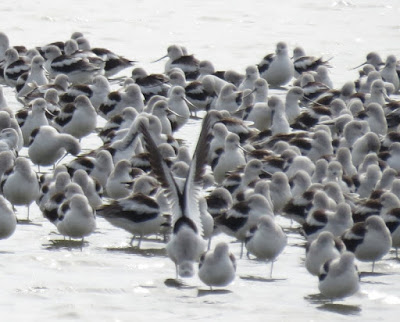 
We finally made it to the beach, but nothing much was down there (although the road in was the best I’ve ever seen it); the waves were crashing in, and about the only bird there was a Laughing Gull!  We had lines of Brown Pelicans further out, but not even any terns showed up!  A small flock of White-winged Doves batted past, interestingly, that were the only ones for the day. 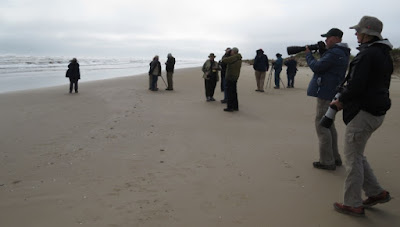 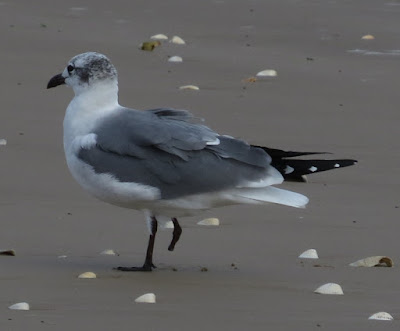 Laughing Gull with a missing foot

So we started back with plans to stop at Palmito Hill Road, but we ran out of time (especially if we wanted to make another Stripes stop) and instead decided to stop once again at the regular falcon spot.  This time, after much scanning, Bob finally spotted a distant pair that was showing all the pertinent field marks!  High fives all around!  But that wasn’t the end of the birding:  at the urban Stripes an Anhinga flew overhead and a friendly Yellow-throated Warbler came down to say hello, and then we witnessed a ballet of White Pelicans on the drive home!  The whole day list came to 103 species!