Minda and Harle (“Linda with an M and Karl with an H,” they told me J) arrived in the Valley as part of a central/south Texas blitz to add to their life lists, and having already gotten many of the “Valley specialties” in Corpus and at the King Ranch, what was left were specific targets – some easy, some impossible! J  Harle had really done his homework, and had created what he called his “Blue Book” from EBird data as to what was most probable when and where, so he understood that a lot of things on his “wish list” were unlikely, but we still had fun trying to nail down some of the more likely suspects.  The original itinerary I had planned was itself impossible, as it would have covered parts of both Hidalgo and Cameron Counties (realistically, you should stick to one or the other during the course of a day), and we ended up spending more time than planned trying to bag what are ordinarily easy birds but were being obstinate this day, so that along with some circumstances that were beyond our control, we missed some key species, but what we did get was awesome!

We started the day at a foggy Santa Ana NWR where three potential targets (Fulvous Whistling Duck, Glossy Ibis, and Sedge Wren) had been reported, and thanks to a tip from Ranger Raul, we found one lingering Fulvous in the entrance pond!  We then sat at the feeders for about five minutes, hoping for a Buff-bellied Hummingbird to come in, but what came in instead was a whole herd of Chachalacas, some of which I thought were gonna jump in our laps!  (They undoubtedly thought we were the ones with the food…)  No hummingbird, so we headed onto the Chachalaca Trail, where Carolina Wrens sang and Olive Sparrows seeped (thankfully not needed J), and once at Willow Lakes we enjoyed a Harris’ Hawk pair and several ducks.   We were on our way to Pintail Lakes when we saw three dark ibis fly into Willow 3 (or whichever one is by the wooden overlook), so we hoofed it back until we could get a good window, and sure enough, one of them had a leaden face and dark eye!  Bingo!  A nice Beardless Tyrannulet called for us as we headed to Pintail Lakes. 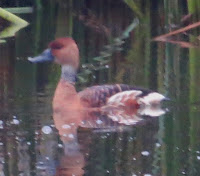 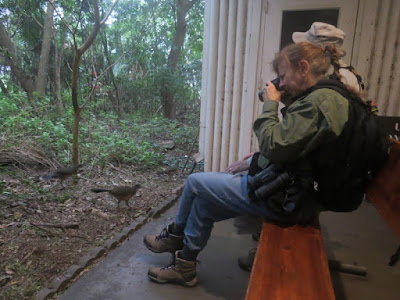 Minda enjoys a close encounter with a Chachalaca! 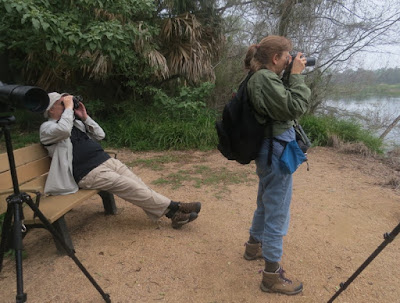 Checking out the Harris' Hawks at Willow Lake 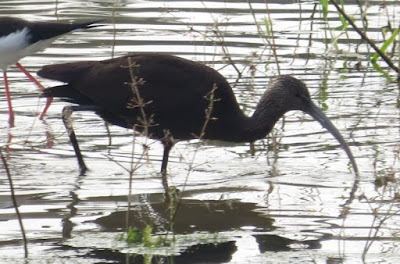 Not the best shots, but the dark eye and grayish face ID this dark ibis as a Glossy, which is considered accidental in the Valley, but may end up being more regular than originally thought once people know what to look for! 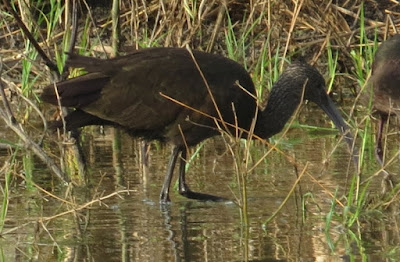 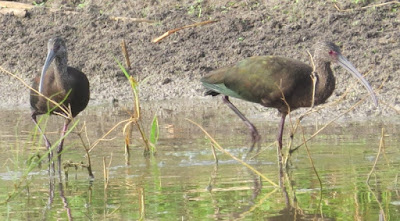 Here, the red eye and more pinkish face of the more expected White-faced Ibis is apparent.

Heading out on the service road, the minute we stepped out into the open a gorgeous White-tailed Kite flew in and hovered right in front of us in perfect light!  As we approached the “Sedge Wren Spot” we heard Yellowthroats and Marsh Wrens a-plenty, and while hiking down to get a better view sun-wise, we were looking at a Savannah Sparrow when a different sparrow appeared in the view, and it turned into one of their target sparrows:  a beautiful Grasshopper!  And he stayed put for many minutes!!  A second bird came in later, so that was extra special; they almost upstaged the Green Kingfisher pair that was having a marital spat! J  In the shorebird department we got good comparative views of both sizes of yellowlegs, a Solitary Sandpiper that was fairly close to the trail, and snipe after snipe flew by; it was really something!  On the way back we did indeed hear the Sedge Wren a couple of times, but it never did come up (not surprised); while trying to pish him up a flock of Snow Geese called in the distance.  On the way back a nice Altamira Oriole gave brief views. 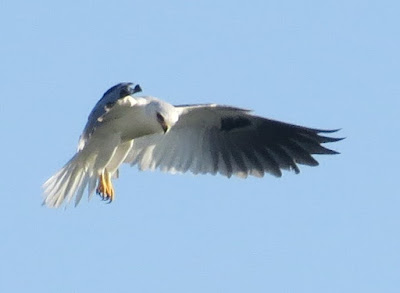 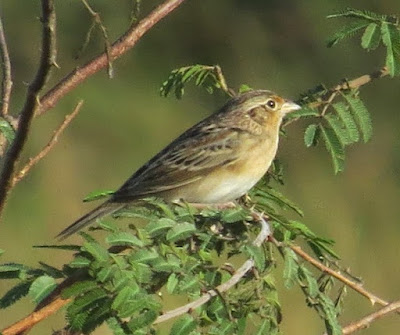 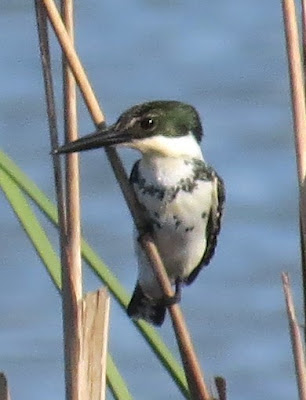 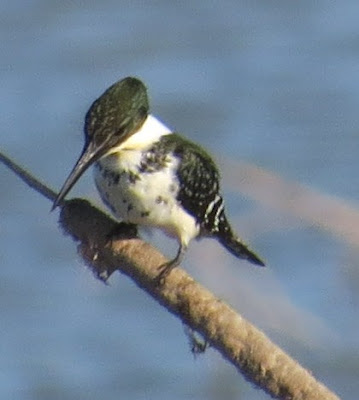 Sprague’s Pipit was also high on their list, so since I had seen some on Border Road just north of the refuge in the past, we decided to give that road a try.  Unfortunately the wind was picking up, and although I did hear both an American Pipit and Horned Lark, nothing showed themselves except a group of Savannah Sparrows; even the normally reliable Burrowing Owl was a no-show.  We at least added Red-tailed Hawk for the day, and also stopped at my “sparrow corner” where I had had Cassin’s, Vesper, and Clay-colored Sparrows during past Christmas Counts (all on their target list), but the wind was just keeping everything down (except a Harrier that flew by).  The cane fields prompted the story of how they burn the fields from the outside in, and play repeated recordings in both English and Spanish to warn people who may be hiding in there to get out NOW!


So we headed on over to Estero Llano Grande, where I left Minda and Harle on deck while getting us checked in, and pinned down Rangers John and Javier and Park Host Huck for any tips on our targets; the good news was that the Pauraque and “McCall’s” Screech Owl were showing well, but the bad news was that the Stilt Sandpipers hadn’t been seen in their usual spot off the levee.  I thanked them, and after we had gotten our fill of Ducks from the Deck, we sat at the hummingbird feeders for about 15 minutes where an Archilocus hummer came in, but no Buffbelly (at least visually; the thing was chirping off-stage…)


Deciding to go for the Pauraque and try the hummers later, we headed out to Alligator Lake, where we ran into Ranger Jose who was “digibinning” a Soft-shelled Turtle on a rock!  Minda found an Anhinga next to shore, and the Yellow-crowned Night Herons showed well, with one Black-crowned amongst them.  Harle had walked on ahead looking for the Pauraque, and I chuckled a bit at the fact that he had walked right past them, so Minda and I went to “the spot”, and sure enough, there was the Pauraque right by the barrier, about three feet away!  We called Harle back, but even so it was hard to get both of them on the bird, only because they couldn’t believe it was “right there”!  Minda actually found a second bird that I had been standing right next to but the view was blocked by a little trunk!  They turned out to be the Bird of the Day for sure!  We then circled around the owl box, pretending that we were ignoring him until we got way past, then looked back to see this little cutie sitting in his hole!  Our local race of Screech Owl is a candidate for a split into “McCall’s”, so I wanted them to be able to put this one in the bank! 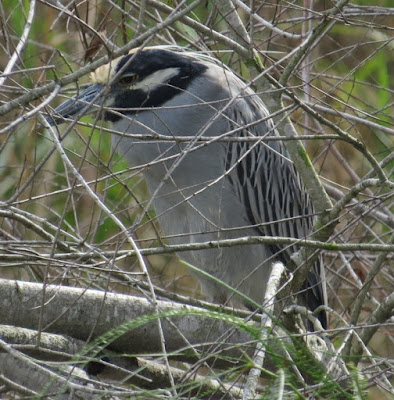 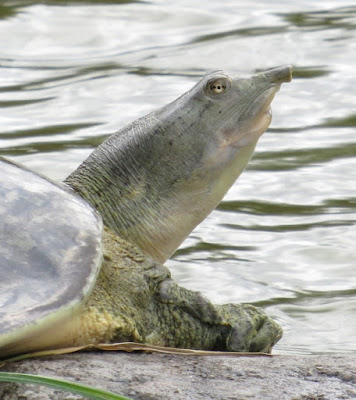 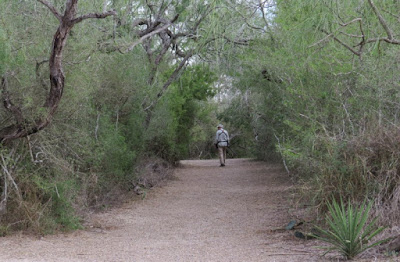 Harle on the lookout for the Pauraque 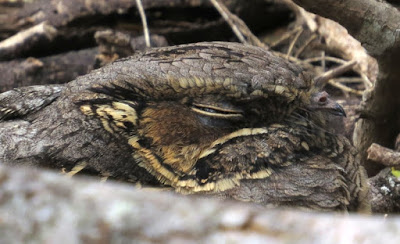 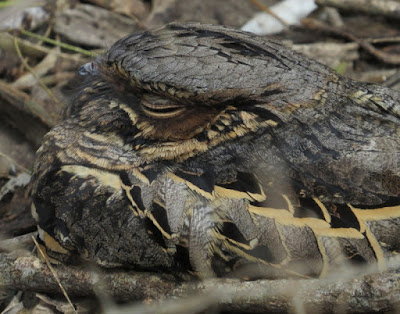 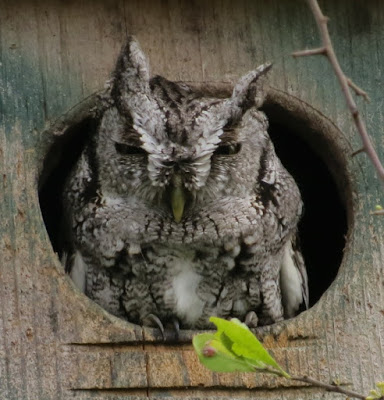 
Huck had called me at the Pauraque spot and reported that they did indeed have some Stilt Sands up on the levee, so we headed up there (but not before enjoying three species of turtles lined up where the Softshell had been), where the winds were gale force!  We added Osprey, Avocets, and White Pelicans to the list, and we did indeed see some paler shorebirds down the way, but with the wind it was hard to tell, and just as I was stepping away from the scope to let Harle have a look, a car on the other side of the levee spooked them all, never to return, so that was that… L  We came back by way of the grasslands in hopes of kicking up an odd sparrow but enjoyed a brilliant Vermilion Flycatcher instead, and the ducks from the vantage point of the boardwalk were glorious, especially the Cinnamon Teal pair!  Another 15 watch at the feeders proved fruitless, however, and while watching the feeders by the building (Harle had gotten a quick glimpse of one and called us over), Park Hostess May Snider came along and invited us to sit at their feeders outside their RV, as a Buffbelly was ferociously guarding that feeder!  So we did so, and another 15 minutes only produced out-of-sight chittering by the blighter, so just as we were about to give up and leave, in he came in all his glory, the sun blasting off that green throat like emerald lightning!  Just as quickly he was gone, and that was the end of the show, but what a show! 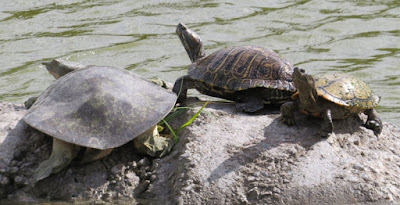 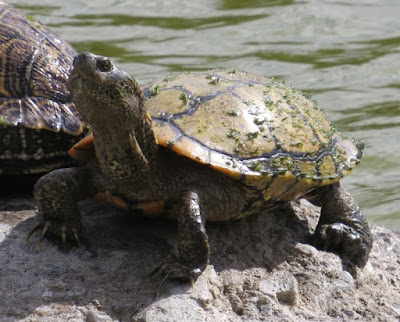 Close-up of the mud turtle 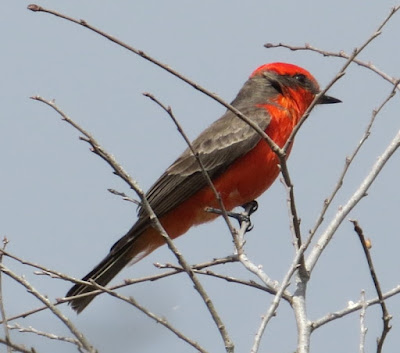 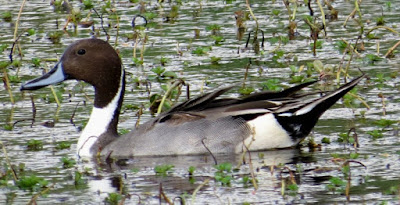 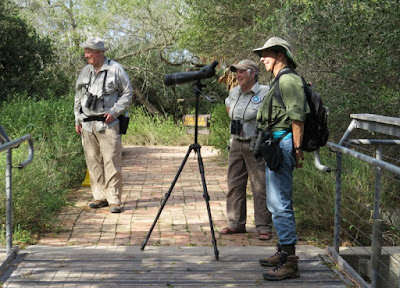 Harle, May Snider, and Minda ponder the Buff-bellied Hummingbird that just got away... 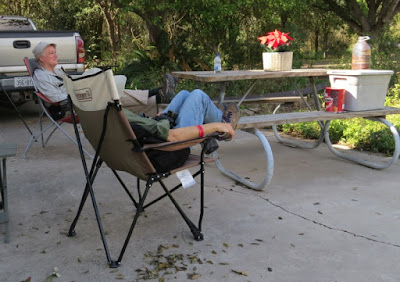 Staking out Rick and May's feeders at their RV!


Considering the time, I thought it prudent to try Quinta Mazatlan for Clay-colored Thrush and Anzalduas for the pipit; we voted on hitting Anzalduas first as the pipit would be the easier of the two to bag, only when we got there, it was closed!!  And it wasn’t the holiday yet!!  We figured that maybe because both Christmas Eve and Christmas fell on the weekend this year, that the county was giving them both Friday and Monday off, but who woulda thunk? L  So we headed over to Quinta Mazatlan, only to find that they were closed, too!!  (Probably for the same reason…)  The saving grace there was a Tropical Kingbird (another target) that finally decided to vocalize for us!


Trying to think fast (not a strong point of mine), I figured with the time we had, maybe blasting over to the feeders at Bentsen might be the best shot at the Clay-colored Thrush, so that’s where we went, and while I was checking us in, another Buff-bellied Hummingbird showed up at their feeders, and lingered enough for Minda to get a picture!  A thrush had been reported around the VC area, but we couldn’t kick one up, so we headed straight to the feeders where Ranger Karla put out some PB mixture, which the Green Jays and Redwings went after with relish!  A Sharp-shinned Hawk broke up the party (no thrush L) but a pair of Black Phoebes at the canal was a nice addition for the day, making the total 85 species for the day!  Bird List: