For our second day of this adventure, we headed out to Salineno, Falcon State Park, and stopped at Bentsen on the way home.  Couldn't find any seedeaters and no Muscovies flew by, but we did have nice looks at a Ringed Kingfisher and a couple of Gray Hawks, and one of the guys spotted a Zone-tailed Hawk from Merle and Lois' yard!  Everyone (including Merle and Lois) was disappointed that neither oriole put in an appearance, but we concluded that it was either due to a) the Sharp-shinned Hawk that was terrorizing the joint (and putting on some great aerial performances while chasing Red-winged Blackbirds. ;-)), or b) it simply hadn't gotten cold enough yet, and the orioles tend to come in when it's too cold for their natural nectar sources to produce anything. 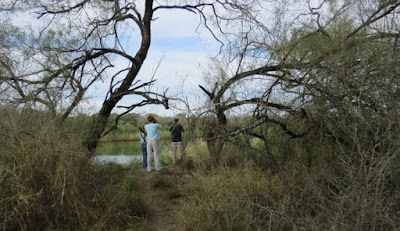 Looking for seedeaters along the Rio Grande 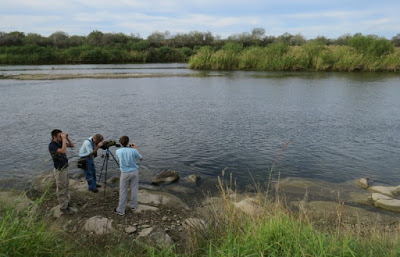 Checking upriver for ducks and pigeons 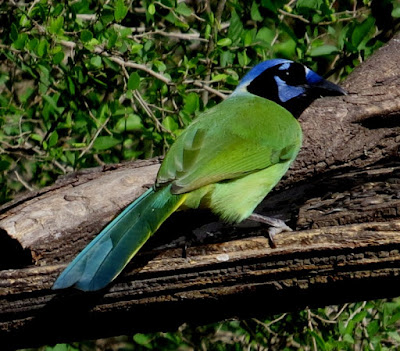 The Dump Road was very quiet, but thankfully Falcon was more productive: several Cactus Wrens sat right up along with a couple of Black-throated Sparrows, a Roadrunner performed famously right next to the car (never mind I was messin' with him by cooing :)), and in the primitive camping area one little bush gave us cracking views of Pyrrhuloxia, Verdin, and my first ever Black-tailed Gnatcatchers for the park! 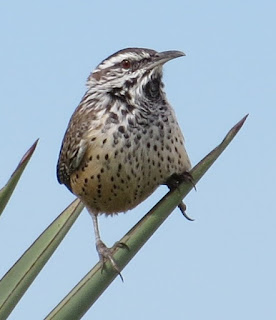 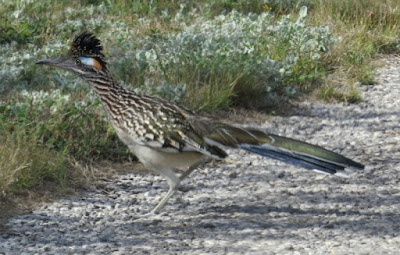 
We went back to Salineno for one last river/feeder watch, then headed back towards the Inn, stopping at Bentsen on the way in hopes of an Altamira Oriole at least, but Gary managed to spot a Clay-colored Thrush while I was checking us in, and thanks to a tip from Ranger Roy at the Gatehouse Feeders we picked up a wintering Groove-billed Ani!  On the way home we stopped at the Green Parakeet staging area at 10th and Dove to at least pick up ONE more lifer! 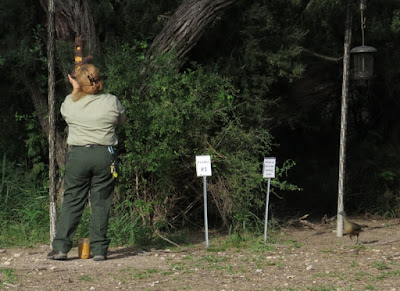 A Chachalaca waits (im)patiently as the Gatehouse Feeders get refilled... 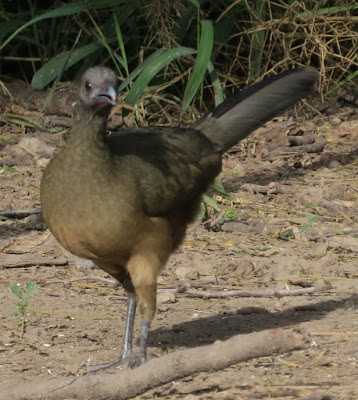