Cool Birding in the Heat

Headed out before dawn on Friday to the chorus of awakening Tropical Kingbirds (which John thankfully got the day before on his laid-back rest day)!  We headed over to Estero Llano Grande under heavily cloudy skies, and as Providence would have it, a state trooper had pulled over a car and both were “using” the park entrance road, effectively blocking our entrance, so we used that excuse to continue south and see perchance if the gate to the actual Estero Llano Grande was open!  Thankfully it was, and as we pulled in, Dickcissels were singing out the yin yang in the field next to us, but unfortunately were laying low due to the wind!  After a long time scanning I was thrilled to hear John say he saw one fly in, land briefly, then dive down into the stuff, but he described it perfectly, so that was great (lifer)!  Several Snowy Egrets and a couple of Great Egrets and Tricolored Herons fed in the river, but that was about it, and not wanting to take the risk of getting gated in, we decided to turn around and head back to the park.


By that time both law-breaker and law-enforcer had cleared the entrance road, so we headed in and poked into the Tropical Zone first.  The place was packed with White-winged Doves, and we managed wire looks at Couch’s Kingbirds.  We saw the tyrannulet nest (with no tyrannulet), and the screech owl was a no-show, so we went to sit at the drip in hopes that some migrants might come in.  A White-tipped Dove pranced by right out in the open, and a Curve-billed Thrasher flew and posed nicely, but we weren’t there very long before we heard Green Parakeets screeching by!  They sounded like they had landed, so that got us out of our seats and to the back road (enjoying a nice Ladder-backed Woodpecker along the east fence), where we finally found one perched closer to the entrance!  John’s life Purple Martins flew overhead, and a female even perched for scope views!  A group of Lesser Goldfinches also were entertaining as they chased each other, and Chachalacas posed right out in the open.  We heard Clay-colored Thrushes all over, but never could get on one (and thankfully that wasn’t one John “needed”).


Headed up the brick walk next, where a Long-billed Thrasher ran across the road and then gave great looks right along the bank!  At the deck the VC wasn’t quite open yet (and found out they were preparing for a group of kidlets), so we checked out things there, said hi to Rangers Jose and John, then sat for 15 waiting for a Buff-bellied Hummingbird to come in to the feeders, which he did eventually, along with a fleeting Green Jay!  When we heard the kidlets were arriving soon we headed straight for Alligator Lake! 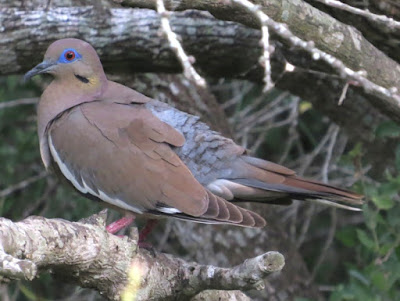 White-winged Dove at the feeders

We made a brief stop at Dowitcher Pond where we had a Gull-billed Tern keeping company with Killdeer and Stilts, and at Grebe Marsh John spotted a female Green Kingfisher!  At the turnoff he announced he thought he had an alligator peeking out of the water, and then I saw what he was looking at:  a Soft-shelled Turtle just peeking its eyes and nose out of the water!  An adult Yellow-crowned Night Heron across the way was nice (we had an immature earlier), but hard as we tried, we just couldn’t find the Pauraque (thankfully that wasn’t a life bird, either, but it’s kind of requisite that all visitors see Estero’s “tame” Pauraques J), and the screech owl wasn’t in his hole, so that was disappointing.  But at least there was the iconic Alligator hauled out on the bank at the overlook! 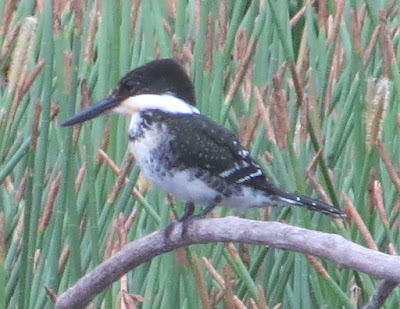 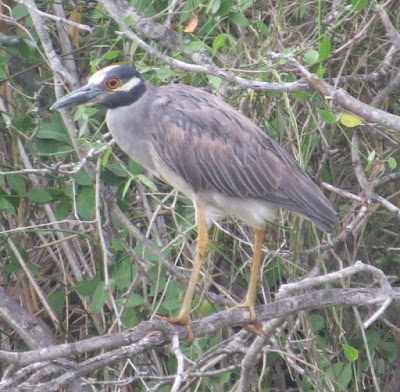 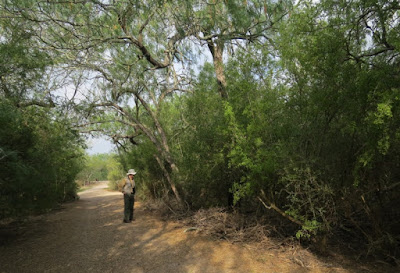 Futile search for the Pauraque...

We found John’s life Stilt Sandpiper in Dowitcher Pond on the way back (we took the loop), but that was about it bird-wise, especially with the wind.  We arrived at the VC to see that the kidlets had arrived in force, and they were having a big time at each “station” along the brick walkway that described the adventures a migratory bird goes through (or at least that’s what I gathered from reading them J)!


It was still on and off overcast and breezy, so it was still tolerable; therefore we headed over to Frontera in hopes of catching some migrants.  We ran into Simon K. who reported a Yellow-bellied Flycatcher and Beardless Tyrannulet (I was surprised we didn’t even hear that at Estero), so we were hopeful!  Actually, things were pretty quiet initially as we made the loop, but we spotted a male Green Kingfisher from the overlook at the Big Pond, and swinging around the back side we scared up a Northern Waterthrush – I was so thrilled to get at least one migrant!!


We made it to the cemetery area where Simon had his flycatcher, and an empid did indeed pop up, but unfortunately not his Yellowbelly – this guy was a “Traill’s” Flycatcher for sure, with barely an eyering and pale underparts, but unfortunately he didn’t say a word, and he was most uncooperative for pictures.  A little further on we did hear the incessant peeping of what I felt comfortable calling a Yellow-bellied, but we never could get him to come out; titmice popped in and out, and a fledgling Olive Sparrow actually popped up (at least I hope it wasn’t actually a cowbird; “Mummy” was nearby, but that baby looked awfully bulky and dark for a sparrow to me…)!  So we decided to sit at the feeders; the first set was rather quiet except for Fox Squirrels and White-winged Doves, but the second set (the “old” feeders) hit pay dirt with a whole titmouse family that came in!  Simon’s tyrannulet called in the distance, so we decided to go after him, and we hadn’t hardly left the area when a real Olive Sparrow family popped up at point blank, and suddenly the tyrannulet was right behind us!  He finally came out with a little coaxing, showing that puffy little head!  A Carolina Wren came in to investigate, and even the Traill’s came back for an encore!  We were amazed at how suddenly everything came together! 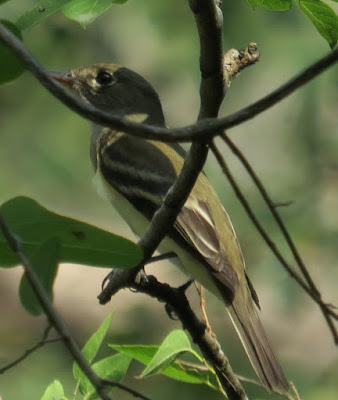 We called it a morning after that, ready to take a siesta to be rested for the afternoon shift!  I was a little concerned with the heat advisory, but with the breeze it was actually quite pleasant!  Our first stop was an unintended one along FM 493 where a flooded field had a nice flock of White-faced Ibis, at least one actually showing the white face!  Both whistling ducks sat side by side, which was nice as well.  I chose to go over to CR 20 in case that wetland was still intact (which it wasn’t), but birding the dicey roads was wonderfully productive:  Scissor-tailed Flycatchers posed left and right, and right away a flock of Pyrrhuloxias chattered and showed themselves!  A Cactus Wren finally came in at the same stop, Lark Sparrows gave good views eventually, and Ground Doves were all over the place.  A Verdin drove us nuts by continually flying back and forth over the road but never allowing a look…  I heard something funny at the dried wetland, and when I got out of the car discovered it was an Ash-throated Flycatcher, with a Brown-crested calling nearby for good comparison! 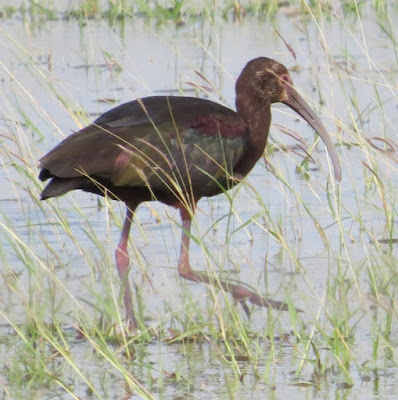 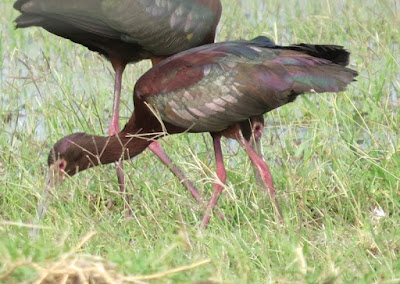 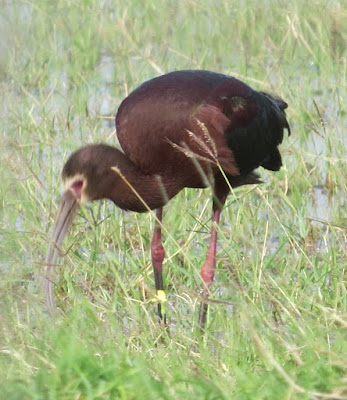 The actual "white face" shows only for a short time during breeding season. 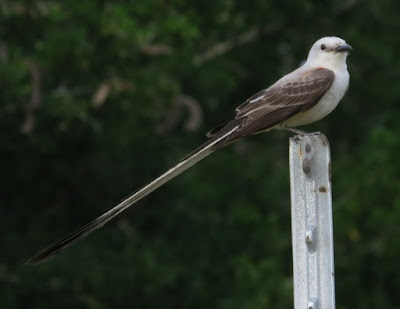 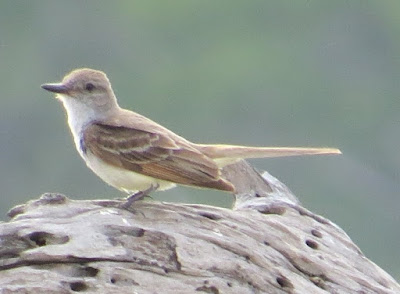 When we made the turn onto the dicey part of Ken Baker Road, we were treated to lovely views of the mesquite savannah to the north (from which Cassin’s Sparrows were singing), a Common Nighthawk batting around, and a couple of Bobwhite hightailing it down the track!  (I also narrowly escaped running over a big coil of barbed wire… L)  What I thought was another empid morphed into an Eastern Wood Pewee, and a Caracara flew over and rattled from a tree.  The road dead ends at CR 30, so we took that south, passing over dry La Sal Viejas (and some iffy parts of the road as well), with an Eastern Kingbird perched on one of the dead trees!  A Yellow-billed Cuckoo sang from a hiding place, and an Ani perched in plain sight on the left side of the road!  But the real treat of this leg was a gorgeous Black-throated Sparrow hopping along the fence!  We heard Painted Buntings at several places, but they were too distant to try and see. 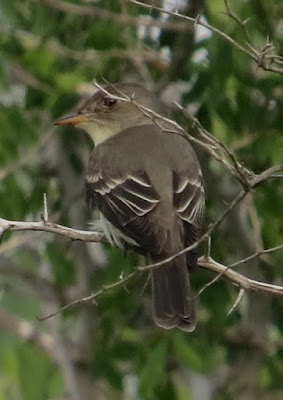 We finally made it down to SR 186 and blasted south for a chance at catching the Red-crowned Parrots on Houston and McColl, but never heard any, either there or at Dallas and Cynthia.  So we called it a day and headed home, very happy with the two days’ list!  We topped it off with the whinnying Lesser Nighthawks back at the apartments!  Today’s list (no pun intended) stood at 78 species, if you count the “Traill’s” Flycatcher as a “species”…  Scroll down to the bottom for a bonus picture!  Bird list: 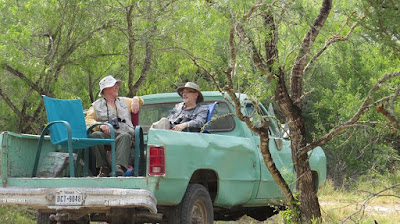 John and Ian chilling out on the next day's Birder Patrol trip (which I didn't attend)!