For Mike’s last full day (and Sally’s last half day) we decided to hit Estero Llano Grande once again after reports that a Purple Gallinule was showing well for a few days!  We started off early so we could get the car packed (picking up the resident Lesser Nighthawks batting around) and headed over to the park.  We went straight to the deck, where the sun was at a terrible angle to start, but we were able to enjoy lots of Stilt Sandpipers and Long-billed Dowitchers, along with a few Least Sandpipers and several Black-necked Stilts.  I wandered over to the boardwalk to look at Ibis Pond in better light, and added Blue-winged Teal and Little Blue Heron, but no gallinule was showing.  Mary G. showed up and pointed out a Sora across the way, and a male Ruby-throated Hummingbird bullied everyone else away from the feeder!


After the visitor center (and thus the restrooms) opened, we took care of business and planned to hike the loop on the boardwalk, enjoying the Purple Martin pair on the way.  But this time, as we scanned the pond, the Purple Gallinule suddenly appeared across the way, posing on a small log!  Granted, he looked to be a subadult, but he still had enough purple to be stunning!  Also on the boardwalk a Lesser Goldfinch posed for us in a mesquite right over the trail, then later flew to the sunflowers where several other goldfinches came in and caused a little skirmish!  What looked like a raptor sitting on a distant dead tree was actually a Black-bellied Whistling Duck. 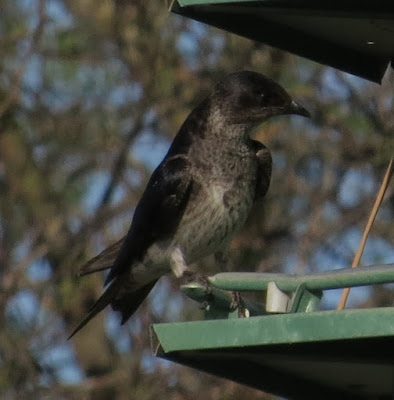 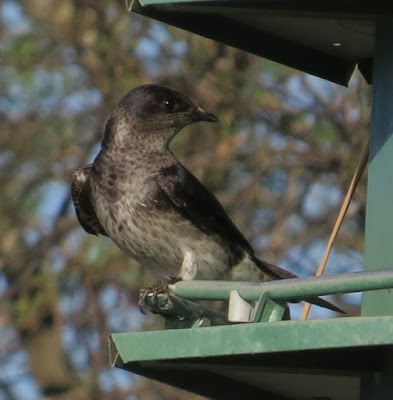 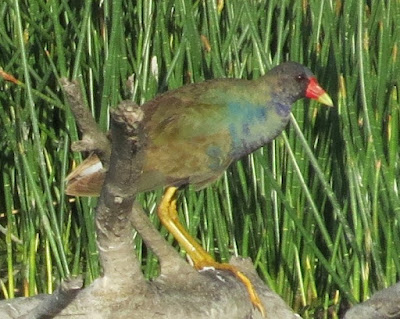 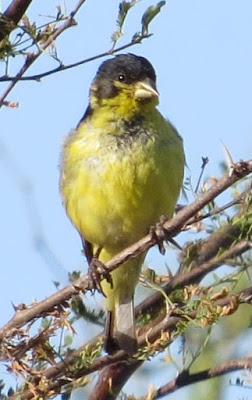 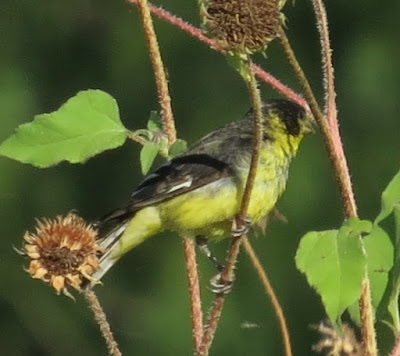 This may be a first-year bird as well, as his back isn't as black as it should be for a full adult.

As we connected with the trail to the Tropical Zone, Sally spotted a Long-billed Thrasher sitting up on the top of a tree, and a couple of Orchard Orioles in a mesquite at eye level!  Heading on in, we discovered a Mockingbird and a Curve-billed Thrasher singing in the same Norfolk Pine, and then they showed me where the tyrannulet nest was (now empty of its brood).  A Groove-billed Ani was a nice surprise, and we were also pleasantly surprised to find the Screech Owl in his tree, but on the opposite side of where I usually look!  He was just adorable!  A 15 minute watch at the drip only yielded a Catbird for a mimid sweep and a couple of Mexican Bluewings (along with some flyby Green Parakeets), so we continued on the trail where I noticed a big-headed, short-tailed flycatcher sitting right on the tip of a stick, so we circled around to where the light was better, confirming an Olive-sided Flycatcher!  He was promptly forgotten when a female Ladder-backed Woodpecker came in and stole the show!

Mike and Sally on the connector trail 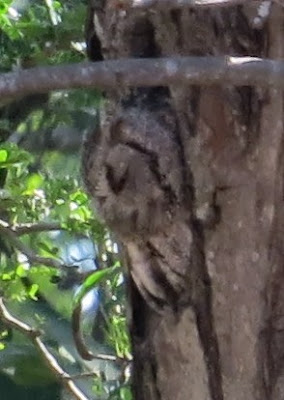 The Screech Owl is on the other side of the tree this time! 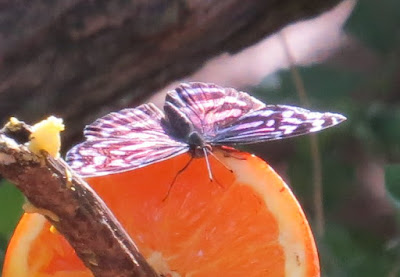 Mexican Bluewing sipping on an orange 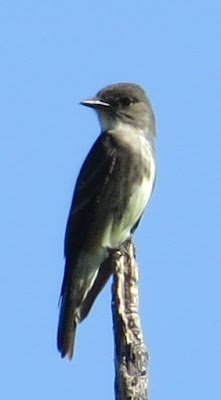 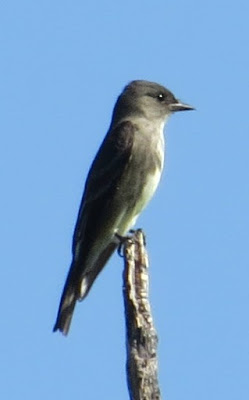 Sally and Mike wanted to go back to the deck for the remaining time before having to leave for the airport, so I dropped off my jacket at the car before joining them, and almost spooked a Rose-breasted Grosbeak on the seed tray along the brick walkway!  The only new thing we really added during our watch was a Red-tailed Hawk, so we reluctantly headed to the airport, kissed Sally goodbye, and blasted out to the Island for one last migrant blitz! 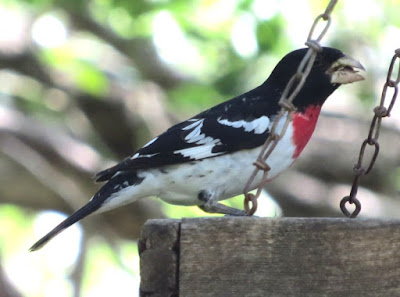 
They had gotten most of the reported rarities with Michael over the weekend, but I was tickled to see many new year birds:  Redstart, Prairie Warbler, Western Tanager, and Magnolia Warbler (the latter new for Mike) came fast and furious, along with old friends such as Swainson’s Thrush and Tennessee Warbler.  A report of a Bell’s Vireo at Sheepshead sent us heading that direction, and when we pulled up Lizzy had the bird in her sights, so Mike got a look at another rarity and another life bird!  (The thing wasn’t too cooperative for photos, though, although I think some of the folks got some…)  Another lady spotted a Palm Warbler, which was another new bird for Mike!  There was a lot of general action there as well:  Northern Waterthrush, Yellow Warbler, and lots of Baltimore Orioles were about, and across the street on the “sunny side” a Groove-billed Ani was entertaining people!  An Ovenbird and Yellowthroat showed up at the drip, but I missed the Bay-breasted Warbler that had shown… L 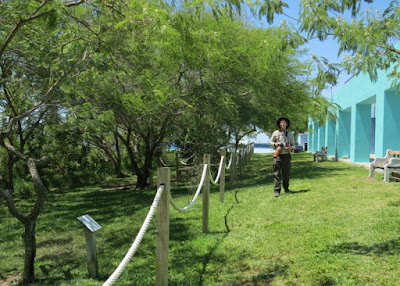 Mike and I return to the Convention Centre for more migrants! 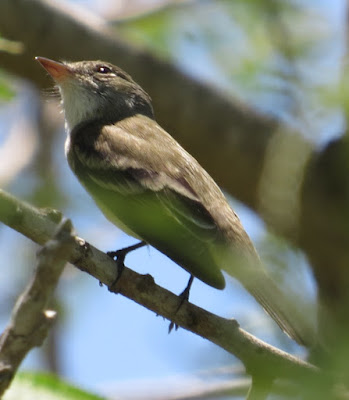 Mystery Empid - some folks suggested Yellow-bellied, but the bill seemed too thin and the throat too pale and contrasting to me.  These last two points made me think Least, but it was a relatively large empid, and the general shape of the bird didn't seem to fit Least to me.  However, to my knowledge, Yellow-bellied is the only Empid to show an actual yellow belly in the spring (almost all of them can show yellow in the fall).  Feedback welcome! 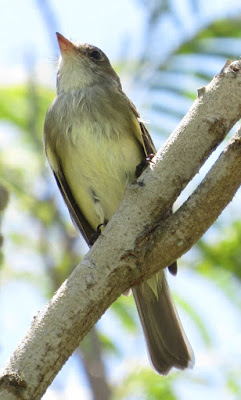 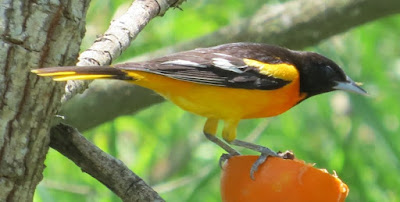 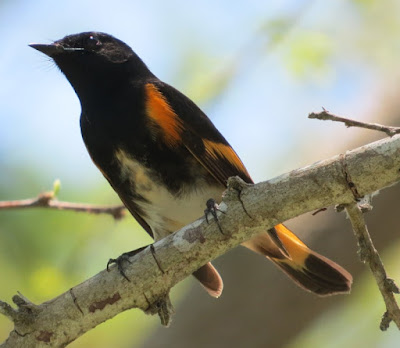 A very friendly American Redstart followed us around... 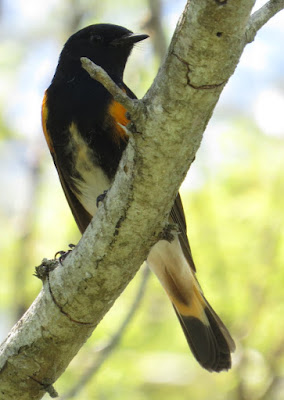 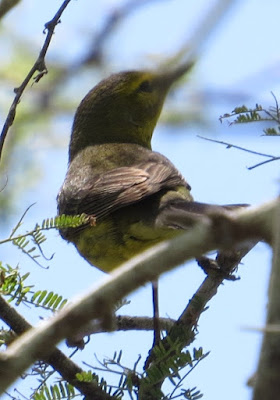 ...whereas the rare Prairie Warbler was harder to get! 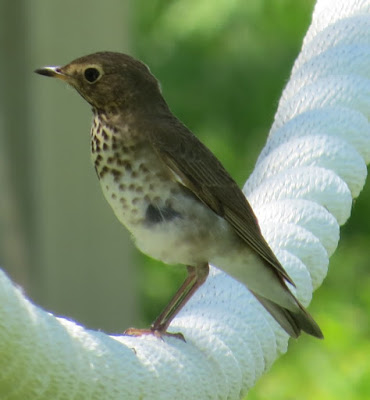 Today the Swainson's Thrush was using the white rope as a perch! 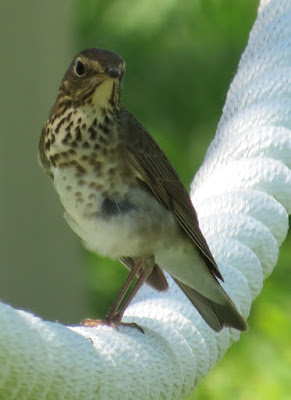 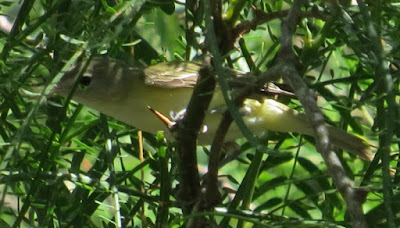 Over at Sheepshead, a rare Bell's Vireo was causing excitement! 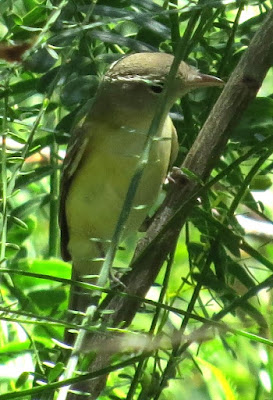 Went back to the “shady side” to see how Mike was doing (we had my walkie talkies to keep in touch), and while at first he was game to stay late, he suddenly remembered that he needed to print his boarding passes, so that made the decision for us to head back.  But we didn’t get far:  Mike was already in the car and I was switching out my water when I noticed activity in the tree behind me, and there was the Bell’s Vireo!  Mike was out in a nano-second (as were the folks waiting for the thing to reappear at the fence), and we all positioned ourselves around this eye-level tree in great light that had Black-throated Green, Tennessee, Nashville, and Chestnut-sided Warblers all vying for attention!  Suddenly the Palm Warbler got into the action, which elicited another round of shutter-clicking!  I was on my way back to the car when I spotted a Philadelphia Vireo (a Warbling had been spotted earlier), so that turned out to be a pretty birdy little tree! 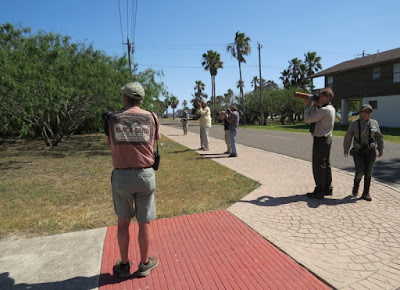 The gang gathers around a bird-stuffed mesquite on the corner of Sheepshead and Laguna! 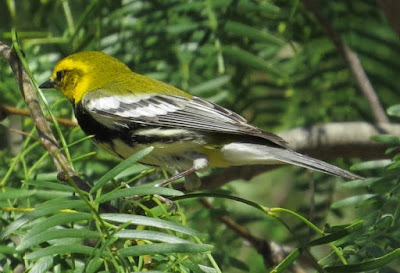 The Black-throated Green Warbler was only too happy to show off... 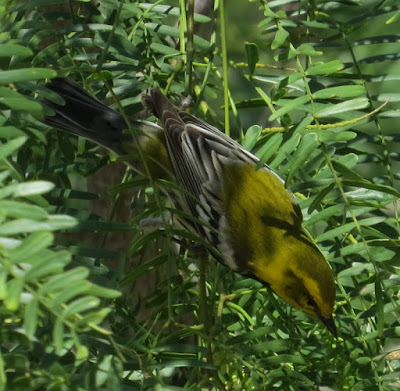 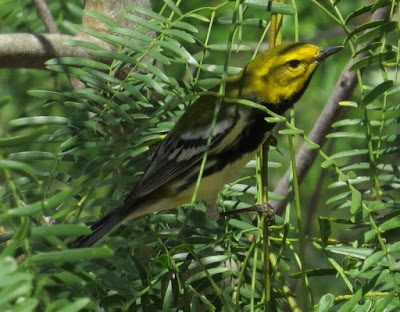 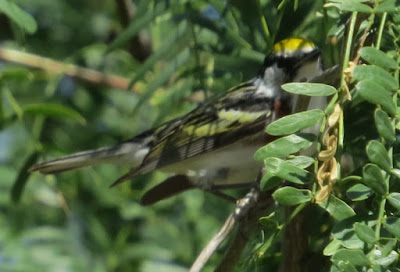 ...while the Chestnut-sided Warbler was more shy! 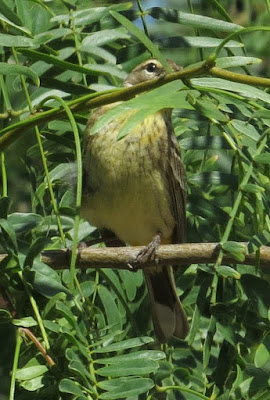 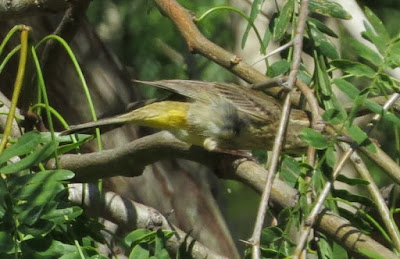 Without even being able to see the head, this guy can be ID'd by his streaky brown plumage and bright yellow undertail coverts (to say nothing of his tail-pumping habit)!

We finally tore ourselves away from that spot in order to make a quick stop at the pond where the White-winged Scoter had shown up, along with another Purple Gallinule; the bird was way on the other side, and to be honest, I never would have guessed it was a White-winged except for the fact that someone had actually seen the white wing patches; it was a pretty sorry-looking bird!  We did manage to see the Purple Gallinule also across the way, and off-duty Ranger John pulled up just in time to see both birds! 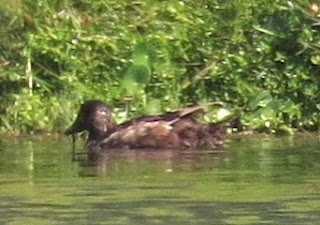 From there we headed home, with a respectable 96 species for the day (and we didn’t even check the Flats – I’m sure we would have broken 100 had we done that)!  Bird List: