I had barely landed from a two-week road trip up to Michigan when Keith announced that a last-minute visitor from Austin might want some guiding Monday!  (Justin, one of our “back-up guides”, was taking care of him Saturday and Sunday…)  He was mainly interested in photography, and since Justin had taken him to all the Hidalgo County hotspots already (and these days “hotspots” had a double meaning L), we convinced him that a trip to Cameron County was in order!  So we made plans to meet Monday morning and head out.


Jack was like me in the sense that, when on a road trip, the car is packed to the gills and you know where everything is, so he preferred to drive, and since he had a Subaru Outback, I knew it could handle Old Port Isabel Road (OPIR) and the Flats out on South Padre, so off we went!  After a stop for tacos and another for a potty break and coffee, we hit the south end of OPIR and immediately bagged the White-tailed Hawk on a pole!  (He and Justin had seen one on Brushline, but the light was horrible for photography…)  This one (and his mate) were in a much better position for portraits!  A little further down the road we would see a young Whitetail bracketed by two Turkey Vultures, and a Mockingbird giving him fits! 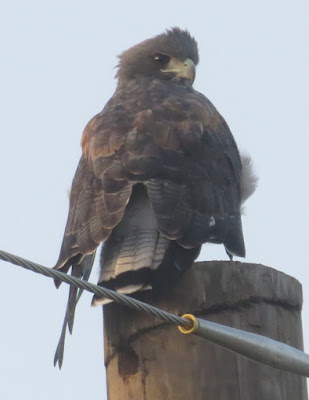 White-tailed Hawk gives us the looking-over and then flies over to her mate! 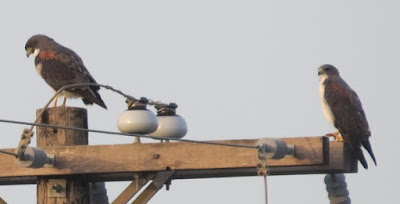 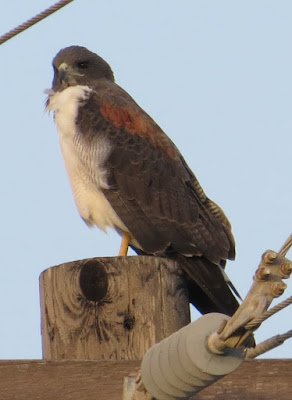 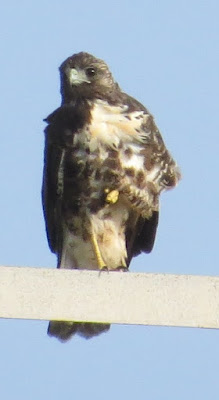 '
A youngster peers our way while a Mockingbird hassles him off-camera... 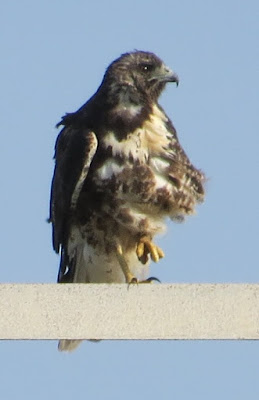 We stopped at the first hacking station with nary a falcon in sight, but we did see a Long-billed Curlew and have a pair of Gull-billed Terns fly over.  Crawling along we had a lot of typical dry brush birds as heard-onlies, like White-eyed Vireo, Cactus and Bewick’s Wrens, and Olive and Lark Sparrows, but a Curve-billed Thrasher and Verdin allowed only fleeting views, while a beat-up Mockingbird came right out!  Several Cassin’s Sparrows were singing, and one finally posed for Jack’s camera.  It may have been that stop when suddenly the Aplomado Falcon went shooting by, but he was against the sun and wasn’t stopping, but was going the direction of another hacking station that I didn’t even know was out there!  Near the “chicken coops” I couldn’t believe I spotted a nighthawk snoozing on a mesquite branch, and when his mate flushed (that we didn’t know was in another tree) the position of the white bar nailed him as a Common.  At the canal we had a cooperative Botteri’s Sparrow sitting up and singing, and two Black-bellied Whistling Ducks posed with a Snowy Egret.  Meadowlarks were quite plentiful, and one of the many Bobwhites we were hearing sat up for Jack! 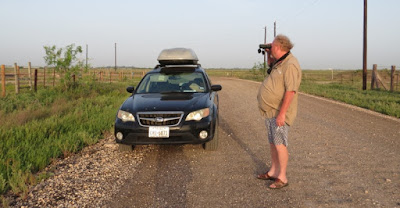 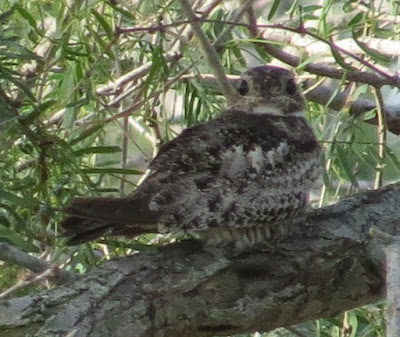 We spot a Common Nighthawk in a mesquite (who also spots us)! 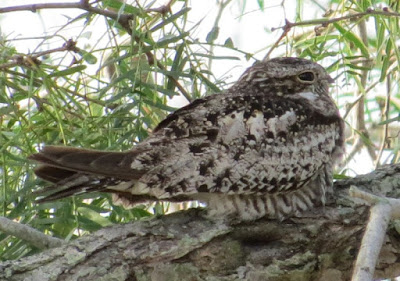 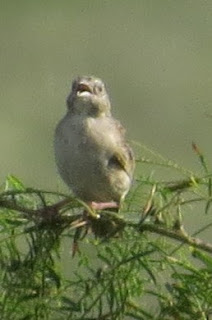 From there we headed over to the Island and the Flats, which were in pretty good shape (but he admitted that had I not told him that the ground was solid under the “ponds”, he would have been leery of going out there himself).  As promised, we were able to drive right up to Laughing Gulls, Sandwich and Royal Terns (was looking for an Elegant as they had been reported from North Padre Island), Black Skimmers, and various shorebirds including Ruddy Turnstones, Sanderlings, dowitchers, godwits, and best of all, all four “little” plovers, including Piping Plovers that were still in breeding finery!  We enjoyed dancing Reddish Egrets and diving Brown Pelicans, and even the Neotropic Cormorants put on a show.  An immature Tricolored Heron was quite impressive with his rusty margins! 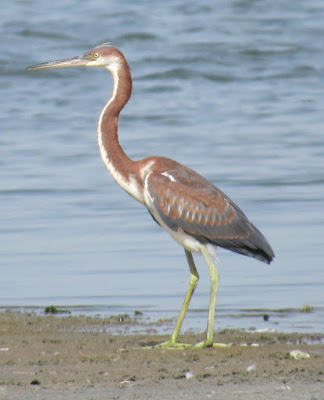 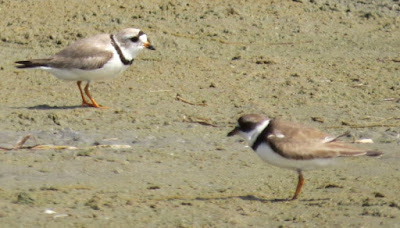 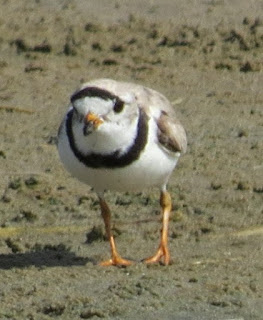 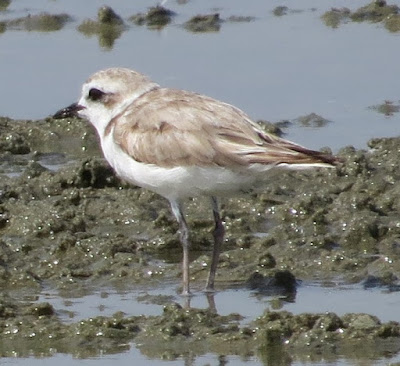 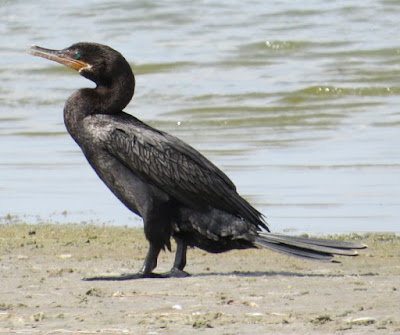 From there we headed to the Convention Centre where I bragged about how great the place was in spring migration (an incentive to come back then J), then headed out onto the boardwalks where we honestly didn’t see much except for a Pied-billed Grebe out at the end (and heard the Clapper Rails).  So we headed over to the Nature Center which was much birdier (and much more crowded with families, we were surprised to see):  an Osprey posed right away, and the Mottled Ducks were where they always are.  Comedy relief was supplied by a guy with a long net trying to fish someone’s hat out of the drink! J  Around the corner we had several Common Gallinules, White Ibis, egrets, herons, and even a Least Bittern whizzed by a couple of times, but Jack was invariably shooting something else when she did! L  The “common pond” (which you can also see from the Convention Centre but the light is better from the Nature Center boardwalk) had the usual spoonbills, a white morph Reddish Egret, and a couple of lone shorebirds like Stilt Sandpiper and Lesser Yellowlegs.  All the families were of course looking for Alligators (of which we saw none), but we did see lots of Blue Crabs!  Back at the parking lot the decorative pond there had three juvenile Black-necked Stilts, and a momma Mottled Duck with her brood of darling fluffy babies under the tree (and she was studiously watching us until the grackle got too close J)! 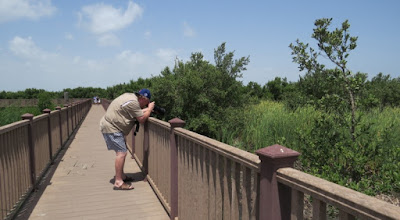 Jack shooting a Common Gallinule (below) 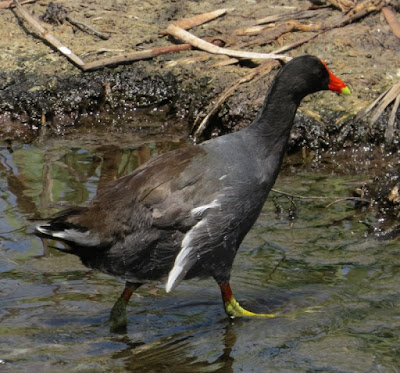 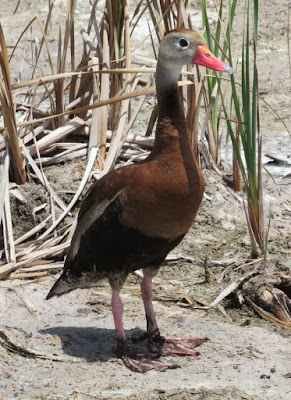 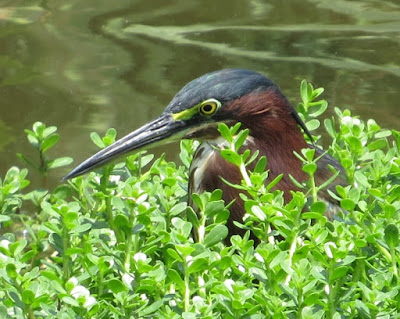 A Green Heron changes positions several times within his little patch of vegetation! 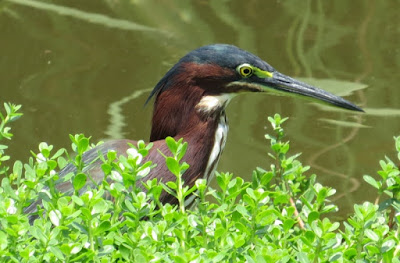 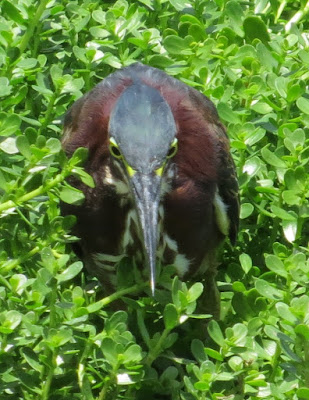 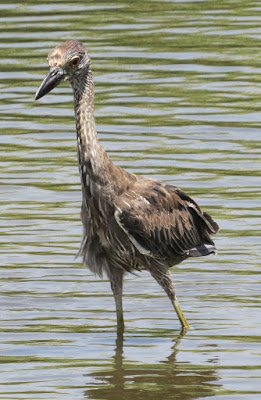 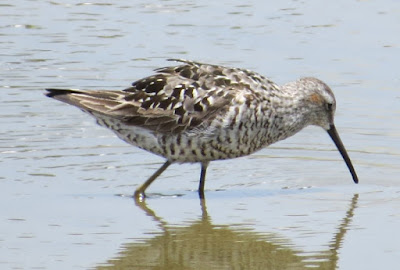 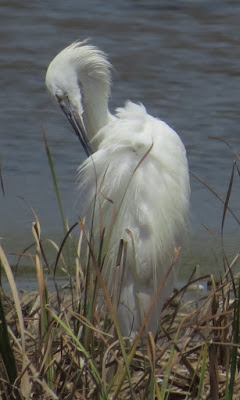 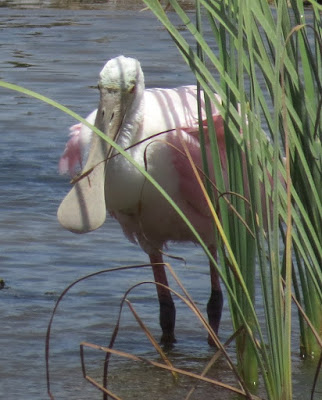 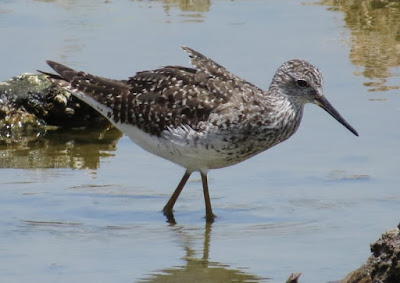 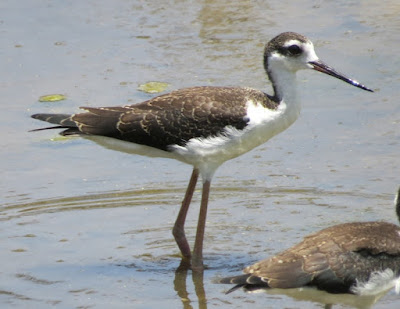 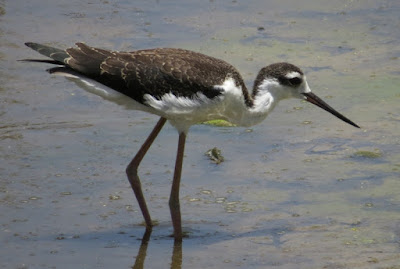 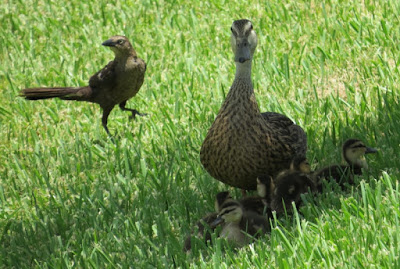 Momma Mottled Duck goes on the alert when a grackle comes too close to her brood! 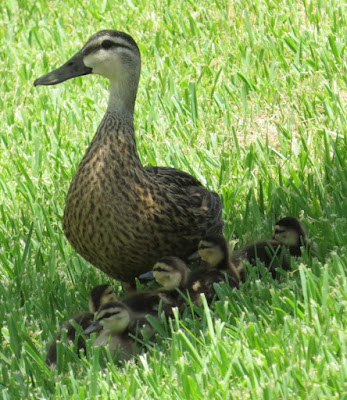 We made a quick visit to the Gulf side just so Jack could wade in the surf (like everyone else was doing) and then called it a day – it was pretty hot out there, but we still managed 83 species!

Enjoying the surf at South Padre!