The plan was to get to Bentsen Rio Grande SP an hour before sunrise in order to bag the night birds, but stepping out the apartment, bird #1 turned out to be a Tropical Kingbird singing his dawn song!  This was followed closely by Purple Martins (2) and a Mockingbird (3), and heading up to the freeway the Great-tailed Grackle (4) cacophony was added.


Once at the park, a White-winged Dove (5) serenaded me, and Pauraques (6) were all over the place!  No one was home at the Elf Owl nest hole, but I didn’t have to go far before I heard one chuckling (7), and a little beyond him was a couple of “McCall’s” Screech Owls (8) trilling!  Further into the park a Couch’s Kingbird (9) was tuning up, and a distant Great Horned Owl (10) came through.  By the time I got to Kingfisher Overlook, Mourning Dove (11), Cardinal (12), Brown-crested Flycatcher (13), and Olive Sparrow (14) had all been added, and once settled at the resaca itself added Yellowthroat (15), Kiskadee (16), a cackling Least Bittern (17), the Coke-bottle White-tipped Dove (18), a whistling Gray Hawk (19), a White-eyed Vireo (20), and a Beardless Tyrannulet (21) doing its dawn song!  As it got lighter the Green Jays (22) woke up along with the Golden-fronted Woodpeckers (23 – I fondly remember the Gambills telling me that they always started calling precisely so many minutes after sunrise), and a Clay-colored Thrush (24) started its mournful song.  On the way back a Green Heron (25) called unseen, and added flyover Chimney Swifts (26), a whistling Altamira Oriole (27), a laughing Ladder-backed Woodpecker (28), flyover Red-winged Blackbirds (29), and a burbling House Wren (30).  A Great Egret (31) also flew over, and a Long-billed Thrasher (32) started his song unseen.  A flatulent brat overhead signaled a flyover Dickcissel (33), and a Blue-gray Gnatcatcher (34) buzzed.  A Common Gallinule (35) cackled from the wetlands, titmice (36) started scolding and whistling, and of course the experience wouldn’t be complete without the chorus of Chachalacas (37)!  Back at the canal some Cave Swallows (38) were flying around, and picked up Inca Dove (39) back in the parking lot.  Not a bad start!


From there I cruised Old Military Highway and the Levee Road to Anzalduas, picking up a Black-bellied Whistling Duck (40) almost the minute I left the parking lot!  At a stop near the terminus of the National Butterfly Center’s Walking Trail picked up singing Eastern Meadowlarks (41), a Bronzed Cowbird (42), and the best surprise – a singing Blue Grosbeak (43)!  A Killdeer (44) yelled, and at the next stop along the caliche portion of the levee, logged Bewick’s Wren (45), Verdin (46), Barn (47) and Bank Swallows (48) overhead, and a young Swainson’s Hawk (49) perched nicely.  Crawling along the rest of the levee added a banded Harris’ Hawk (50 – was wondering if it was one of the birds Bill Clark had banded), and closer to the commercial area added Loggerhead Shrike (51), House Sparrow (52), Starling (53), Double-crested Cormorant (54) along the Rio Grande, Cattle Egret (55), and a Curve-billed Thrasher (56). 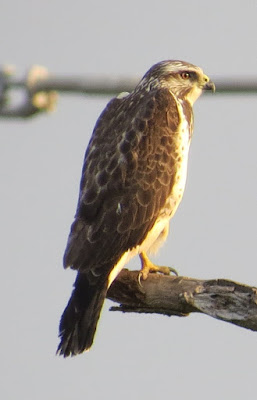 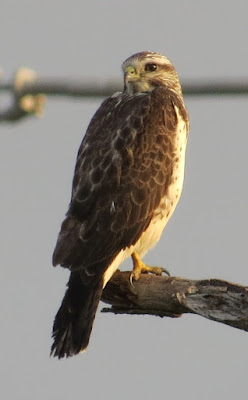 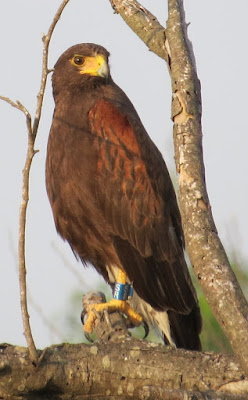 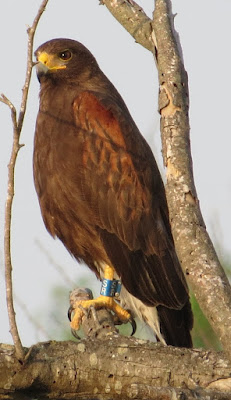 Had to “go around the block” seeing as you can no longer access that last stretch of levee that goes straight to Anzalduas, but there were plenty of Cliff Swallows (57) flying around on the way in, and a Black Phoebe (58) was on the fence even before I got to the gate!  Both Least (59) and Pied-billed Grebes (60) were in that little wetland along the spillway, and once in the park enjoyed an Osprey (61) who was enjoying his breakfast!  Along the river picked up Laughing Gull (62), Great Blue Heron (63), and Coot (64) easily enough, and at the dam logged Rock Pigeon (65), and a peek behind the dam added Neotropic Cormorant (66).  It was sad to see all those beautiful trees taken down, but it did allow access to the muddy shore where I picked up Least (67) and Spotted Sandpipers (68), and Rough-winged Swallows (69) around the dam.  On the way out the Turkey Vultures (70) were starting to rise, along with a great liftoff of Broad-winged Hawks (71)! 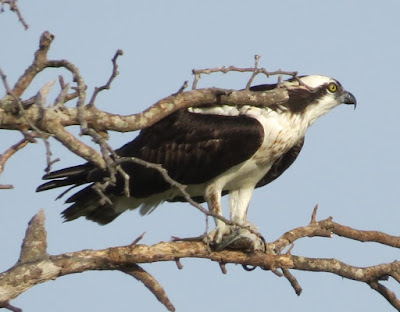 Rio Grande with Mexico across the way 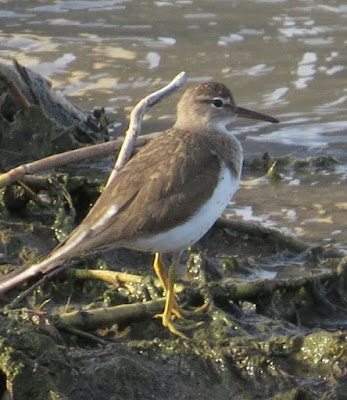 Since moving to Alamo, I decided to rearrange the route a little so that I would end up closer to home by sunset, so decided to head north to the La Sal del Rey area, planning on stopping at Quinta Mazatlan (QM) and Edinburg Scenic Wetlands (ESW) on the way.  Decided to skip QM as they had a huge event going on, but I did manage to add Scissor-tailed Flycatcher (72) on the way.  Continuing to ESW, I immediately logged Buff-bellied Hummingbird (73) upon entering, but it turned out to be a slow migrant day there, as I had none at all and only added Forster’s Tern (74) and Anhinga (75) to the list at the north pond, and Snowy Egret (76) and Blue-winged Teal (77) at the south pond.  A Green Kingfisher (78) shooting past as I cut over to the jogging trail saved the day! 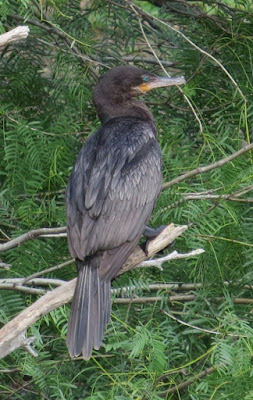 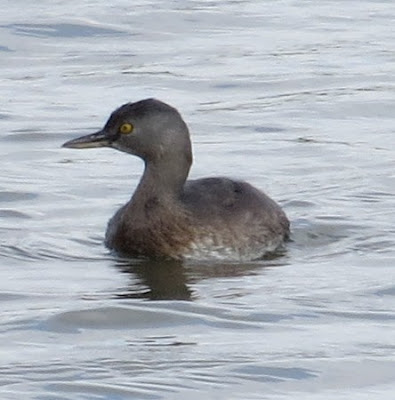 Front and back views of a Least Grebe The La Sal Loop wound up being very productive (unlike past Big Years), and as I crawled along South Brushline added Caracara (79), Lark (80) and Cassin’s Sparrows (81), and Horned Larks (82).  Crossing SR 186 and getting into the good thornscrub of the NWR tracts, added calling Bobwhite (83), chattering Pyrrhuloxias (84), a Roadrunner (85) along the roadside, and the real prize, a stunning male Bullock’s Oriole (86)!  Towards the north end of the road were plenty of Common Ground Doves (87), and at the farm pond a Brown-headed Cowbird (88) gurgled.  At road’s end was a Collared Dove (89), and a second pass at the pond added Greater Yellowlegs (90).  I was sweating getting White-tailed Hawk for the day as I crawled down Ken Baker Road, but after a group of Black Vultures (91) showed up, a distant dot morphed into an adult White-tailed Hawk (92)!  Hallelujah! 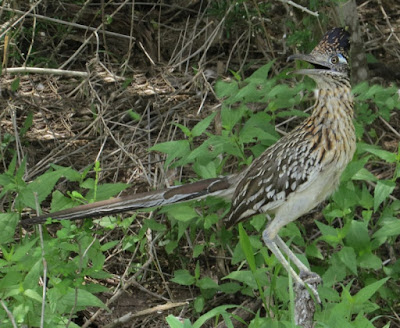 A potty stop at Delta Lake Park was a necessity, but a swing around the park only added Black-necked Stilt (93) and Lesser Yellowlegs (94), which I also picked up elsewhere, so I made a mental note not to linger here in the future (unless the lake level was low enough for shorebirds).  That took me down FM 88 to Frontera Audubon, where migration was also slow, but of good quality:  a Lesser Goldfinch (95) greeted me at the entrance, and a Carolina Wren (96) sang from the woods.  A Myiarchus flycatcher turned out to be a Great Crested (97), and a singing Philadelphia Vireo (98) was a great addition!  A male Summer Tanager (99) rounded out the migrants at that place.


Then it was on to Estero Llano Grande SP, where I was able to make up some slack in the waterbird department.  Huck was there to help me out, and in short order added Long-billed Dowitcher as Bird #100 (that’s always fun to see which bird will get that honor J), followed by Avocet (101), Stilt Sandpiper (102), and Mottled Duck (103).  I ran into Lissy (the female half of a British couple that happened to be staying at the Inn), who informed me that a Swainson’s Warbler was back at the drip in the Tropical Zone, where her hubby Jason was now planted indefinitely (because she had seen it – and photographed it – and he hadn’t J), so I hightailed it out there myself, and joined Jason, giving the bird 15 minutes to show up (when doing a Big Day you can’t afford to spend too much time at one spot), but only adding the reported Eastern Wood Pewee (104).  Giving the deck one more shot added White Pelican (105), Shoveler (106), Ruby-throated Hummer (107), and Cinnamon Teal (108) to the list (and later at South Padre Island, I would hear from Jason that five minutes after I left, the bird showed up… L). 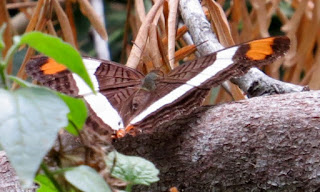 Next stop was the Progresso Sod Farms, where I really hit the Grasspiper Jackpot:  thanks to another birder who was scanning one of the far fields, he pointed out some Upland Sandpipers (109) that I never would have picked up on, as they were so far away!  Down the road, however (and close enough to pick up with the naked eye) was the mother lode:  several American Golden Plovers (110), Baird’s (111) and Pectoral Sandpipers (112), and the real prize, a couple of Buff-breasted Sandpipers (113 – there’s just something about the “Buffies” that are so endearing J)!  While I was studying them a Common Nighthawk (114) batted overhead, and crawling further down the road bagged a Groove-billed Ani (115) that called and flew off!  Continuing up on the levee, I discovered to my chagrin that they now have the FM 88 access gated off!  So doing some white-knuckle maneuvering to turn around on that thing (thank God for the backup camera), managed to head back to the Sod Farm Road, adding White-tailed Kite (116) for my troubles! 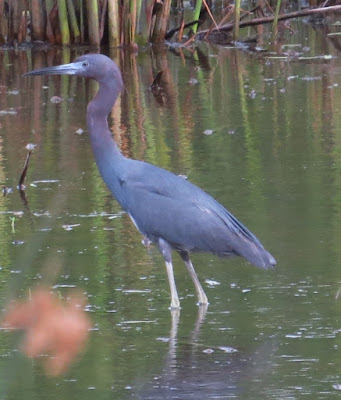