(I need to make a caveat:  the Spring Tour blogs only reflect the days *I* took Mike and Sally out; Michael Marsden and Keith Hackland were the guides when I wasn't available, so there are actually more "parts" than what I've published here!)

Mike and Sally were the only participants on Alamo Inn’s “Spring Tour”, but that certainly made things easy logistically as we just hopped in “Heppy” and took off! J  We had had a thunderstorm the night before (that Sally flew through in order to get in late last night L), so since it was supposed to clear up that morning and start raining again in the afternoon, I planned on taking them to Frontera Audubon Thicket for some hopeful migrants, and then road bird the La Sal del Rey area so we could stay dry in the car!


Frontera turned out to be extremely productive: we arrived at about 7:40 and didn’t get out of there until about 2:00!!  They had just opened the gate and I was wheeling in to park, expecting my charges to follow me in, when what would have been their life White-tipped Doves pranced across the parking lot!  Thinking they went in another way, I went ahead and parked, then discovered that they had been waylaid by a perched Mississippi Kite!  I was sure hoping to see one of those this season!


Things were quiet at the water feature at first, so we headed into the woods and tried to get on every little seep we heard and every little body we saw!  Most of them wanted to stay high in the trees and behind the leaves (or in the sun), but during the course of the morning we did manage to get decent looks at Philadelphia and White-eyed Vireos, Black-throated Green and Nashville Warblers, and even a Yellow-billed Cuckoo that flew in!  At the big pond overlook a male Green Kingfisher shot back and forth, and in the little muddy section in the middle had both Solitary and Spotted Sandpiper (with the spots), plus a fluffy Snowy Egret!  Along the back fence a pair of Carolina Wrens doing some nest-building allowed Mike to get a great shot, and at the view into the cemetery we had great looks at Inca Doves hopping around.  A rest at the feeder areas gave us wonderful views of Chachalacas, White-tipped Doves, and finally a Cardinal for Mike to photograph!  The “new” feeder area boasted a Painted Bunting, and at the “old” feeder area a nice Blue-winged Warbler came in close, along with both Great Crested and Brown-crested Flycatchers!  Both Sally and Mike enjoyed the antics of the Fox Squirrels and Eastern Cottontails as well! J 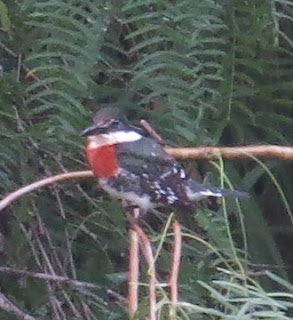 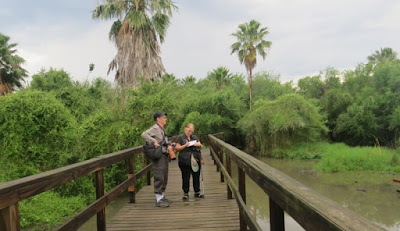 Mike and Sally birding from the boardwalk 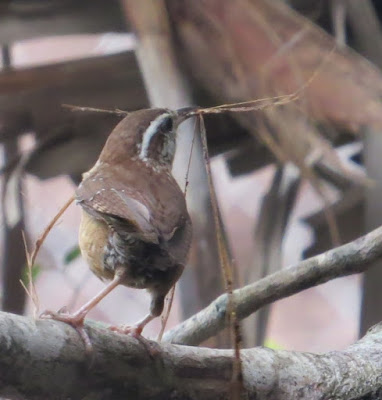 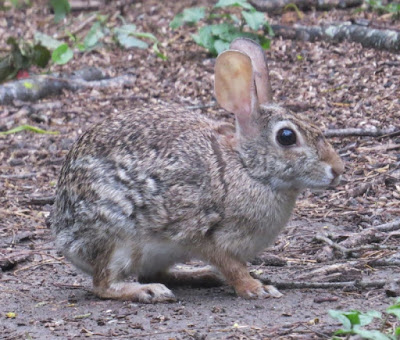 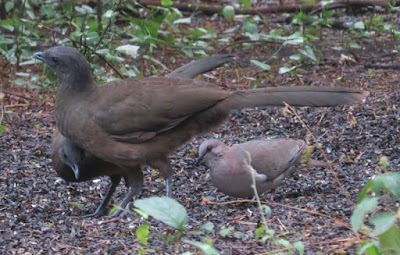 Chachalacas and a White-tipped Dove at the feeders 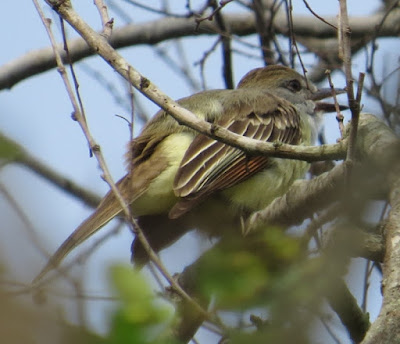 This Myiarchus flycatcher generated much discussion, but we finally settled on Great Crested Flycatcher! 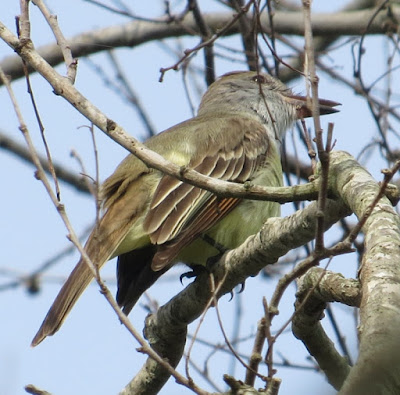 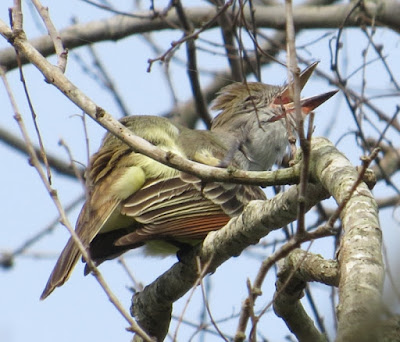 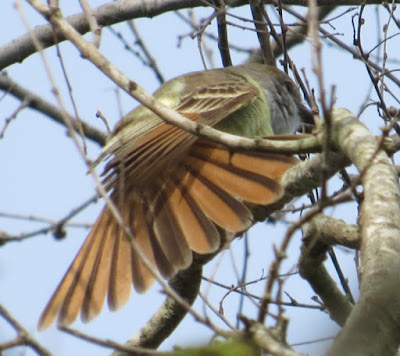 After checking in we covered one last trail and managed to flush two Chuck-will’s-widows!  Green Parakeets were shooting over occasionally, but only allowed brief looks through the trees.  Chimney Swifts were all over, and at one rest stop we actually got a view of a liftoff of Mississippi Kites – yippee! J  While we were trying to zero in on a feeding flock we were distracted by a Gulf Fritillary and a Brown Anole extending his bright red gular flap!  We then checked the butterfly garden (as they were both interested in having those pointed out as well – at least the big, pretty ones J) where we were hoping a titmouse would come in to the feeders, but only got House Sparrows.  We had run into Simon K., however, and he called over to say he had a Bell’s Vireo!  So we all rushed over and saw glimpses of said bird, but not enough to really tell what it was.  He then found a Wood Thrush, which thankfully Mike and Sally saw, but I didn’t L. 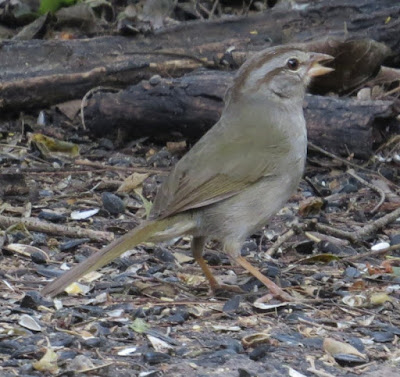 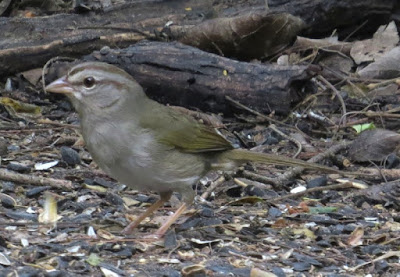 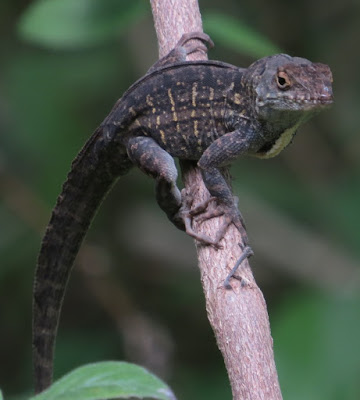 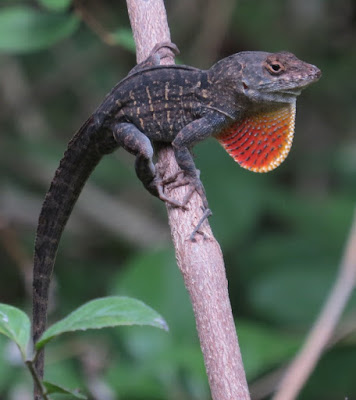 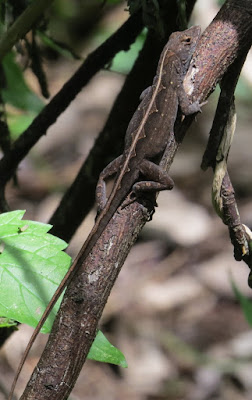 Female Brown Anole has a white stripe down the back. 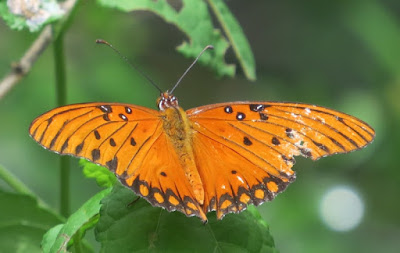 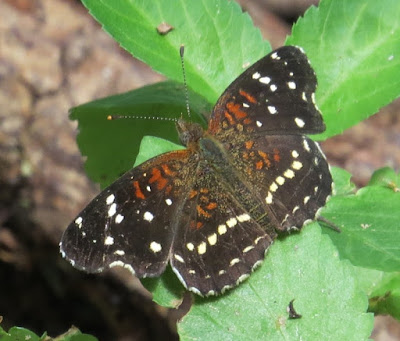 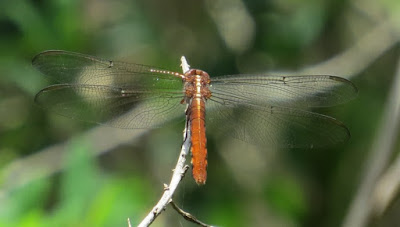 Female Carmine or Roseate Skimmer - they can be tough to tell apart! 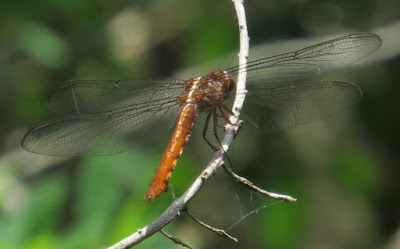 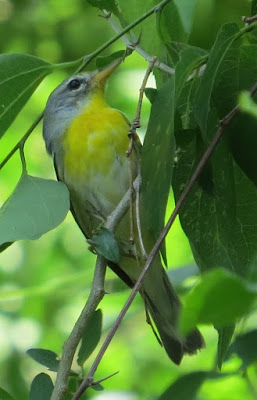 We finally tore ourselves away from there, picking up a Loggerhead Shrike on the wire on the way out!  Chris had told us about a good sandwich shop in Weslaco called the Chef’s Club, so we ordered some sandwiches to go, and they were really quite good!  We munched while heading up to La Sal del Rey (getting many Scissor-tailed Flycatchers on the wires), but the threatened storm apparently dissipated, so I felt emboldened to go up CR 20 and see if there were any goodies in that wetland that the road crosses!  Indeed there were, with both Pectoral and Baird’s Sandpipers giving a show, along with a couple of Horned Larks! 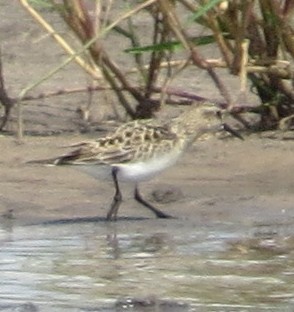 Baird's Sandpiper on the far side of the pond

We continued on and enjoyed the butterfly show in the flowers along the roadside, including a Giant Swallowtail and a Snout right by the car!  From there we just crawled through the refuge area; despite the heat we saw some good birds, including three Indigo Buntings that were eating seeds along the fenceline, a Bullock’s Oriole that gave a distant view, and a wonderful Bewick’s Wren that came in with a little prompting!  Lots of Common Ground Doves flushed left and right, and then the star showed up:  a Roadrunner with a big lizard in his beak!  That was definitely the highlight! 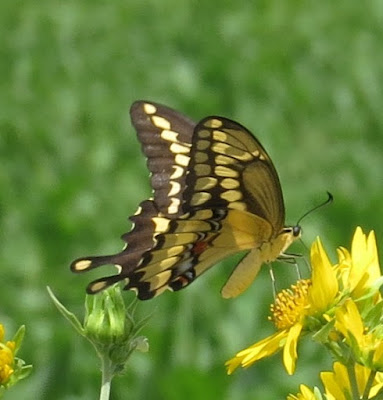 We had to get going after that, but not before enjoying a Harris’ Hawk being chased by a kingbird, and then on the way home passing a tremendous wetland that had all sorts of shorebirds, including stilts, avocets, both yellowlegs, Stilt Sandpipers, a dowitcher, and another Baird’s in with the Leasts!  My FOS Western Kingbird also landed on the wire while we were enjoying a couple of Bronzed Cowbirds making chests at each other…


Finally headed home after that with 84 species for the day!  Bird List: