A miracle happened in the midst of constant dry weather and south winds, and a cold front blew through Tuesday night and kept up the north winds through Wednesday, so John from Warwickshire, England timed his arrival perfectly!  It was cool and crisp in the morning (I caught the nesting Lesser Nighthawks batting overhead while getting the car ready pre-dawn), and the whole time we were at South Padre Island we had a cool breeze blowing!


We headed out, stopping at a Stripes for coffee and a snack, then went over to the Island by way of SR 100, bagging a pair of Chihuahuan Ravens flying across the road.  We stopped at the Blue Shack and initially saw only Black and Turkey Vultures, but just as I was getting ready to pull out, we saw this little guy buzzing after one of the vultures – the Aplomado!  He swung up and landed on one of the crossbars (in horrible light, naturally), so we pulled ahead and found a safe place to pull over where we could put the scope on him for better views!  Another Turkey Vulture came too close, and he and another falcon took chase!  That was fun!


Once on the Island we headed straight to the Convention Centre, where things seemed a little slow, but ran into Joe from Edinburg who had seen “a couple of warblers”, and when he showed me what he photographed, I nearly fainted – he had just seen a male Golden-winged Warbler!!  So he showed us where the bird was, joined by fellow Birder Patroller Betty, and before long the little guy came in and showed beautifully!  John and I went to sit on the “corner bench”, and stuff just started coming to us: in addition to the Goldenwing making several appearances, we had visits from a Magnolia and Black-throated Green Warbler, an American Redstart, and several Eastern Wood Pewees!  (We discovered later that the Goldenwing had an injured foot, hence why he probably hadn't headed north yet...)  After about ten minutes we poked around the back area where we didn’t see much (and even less out back as the water was very high, but one of the “pied-winged” Reddish Egrets put on a nice show by hanging in mid-air aided by the north wind), so we circled around when I thought I heard a waterthrush pink.  Couldn’t pull anything out, but what was showing up was dozens of Eastern Kingbirds!  Joe pointed out a single Cedar Waxwing, and Scarlet and George Colley showed up and pointed out a female Indigo Bunting!  John got a kick out of the Black-bellied Whistling Ducks camped out on the top of the Centre building! J 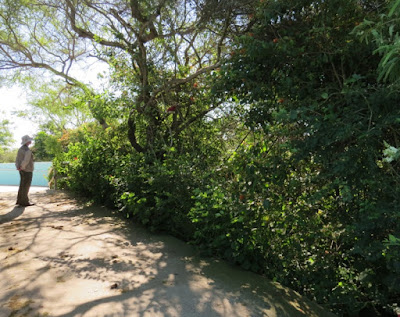 John willing something to come in to the water feature! 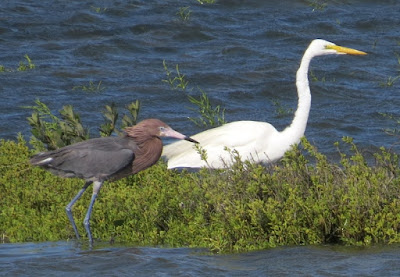 
We finally hit the boardwalk, enjoying the requisite spoonbills and stilts out in the east pond, along with some waders we hoped to get a better look at from the Birding Center boardwalk (a bobbing Spotted Sandpiper was about the only thing we could positively ID in that light).  Halfway down the boardwalk I spotted John’s coveted Least Bittern out in the open, but the bugger slinked into the reeds before John could get on him! L  Not to be deterred, we went to the end of the boardwalk, where thankfully another bird was halfway up the reeds and decided to pose beautifully for us!  A Caspian Tern weaved around and showed off every field mark, while several of the other extreme, the Least Terns, batted around.  The other boardwalk was rather birdless except for a female Yellow Warbler that darted in and a singing White-eyed Vireo that refused to come out, but we were hoping for the reported frigatebird!  Nada…  On the way back a White Ibis in full breeding color sailed by, and we spotted a few Scissor-tailed Flycatchers in with the kingbirds, but before heading for Sheepshead (where the report of a continuing Yellow-green Vireo had just come in) we checked the “roundabout bushes” for stuff, but just had a few pewees. 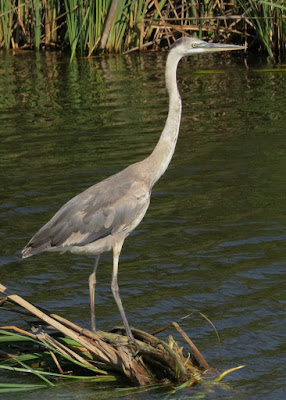 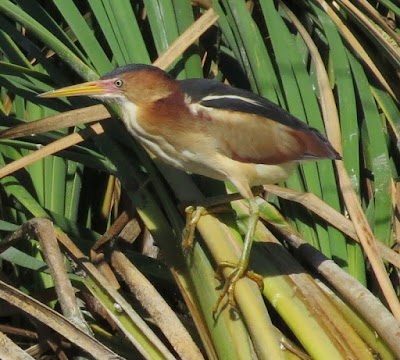 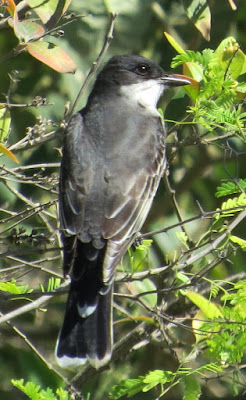 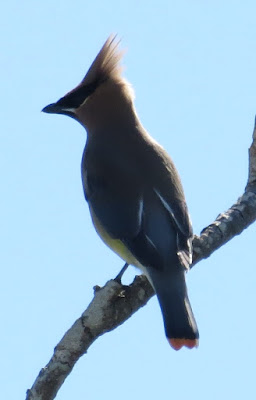 After stopping at “What-a-birder” we headed over to Sheepshead where Mary G. and Lizzie and several other ladies were already at the fence; Lizzy told us the vireo had been playing hide-and-seek, so we retrieved our burgers from the car and munched down, figuring that would make the bird come out (when our mouths and hands were full of food J)!  We made it through lunch with nothing more than a Red-eyed Vireo and female redstart interrupting us, and I had just pointed out a Chestnut-sided Warbler to John when one of the girls said, “I have it!”  The Yellow-green Vireo was at the back water feature!  Thankfully everyone was able to get onto him, so that was a real treat! 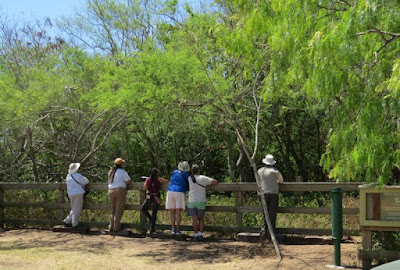 Waiting patiently for the Yellow-green Vireo to show up...

We meandered over to the other side after that where John found an empid that my gut feeling on was Willow (no eyering), but later I was hearing a pit, which would fit Alder, so I’m not sure what we had, as I’ve never seen a proven Alder that didn’t have at least somewhat of a thin eyering.  Betty refound us just as a strange little guy jumped from a palmetto into the grass, and when he finally came out it turned out to be a first-year Mourning Warbler (which made sense after the husky call note I heard)!  A Common Nighthawk put in a surprise appearance and then flew right over our heads – another lifer for John!


From there we decided to try The Flats, which were actually drivable (I wasn’t sure seeing all those whitecaps from the back of the Convention Centre)!  We only had one little larid flock to drive up to, but the quality couldn’t be beat:  besides the usual Royal and Sandwich Terns and skimmers (just a couple), we had several Black Terns (a couple in full breeding plumage), several Common Terns (one in breeding plumage but most were in basic), and a handful of Sanderlings.  A snoozing Marbled Godwit was our token “big shorebird”. 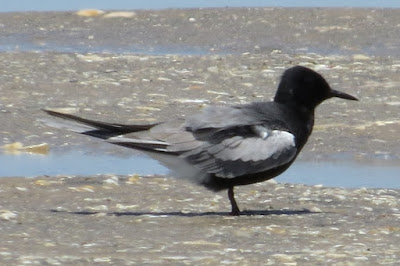 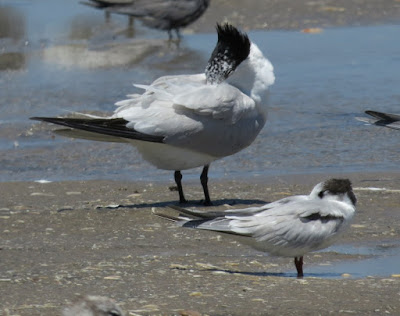 Royal (in back) and Common Terns 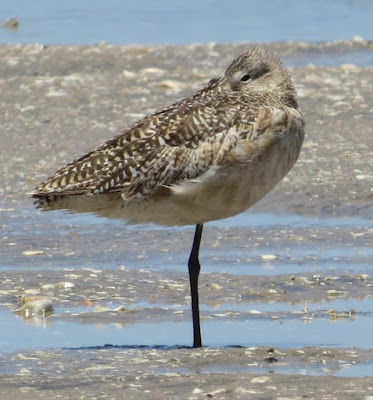 From there we decided to hit the Birding Center, where a walk around the butterfly garden hit pay dirt with a great look at a Yellow-billed Cuckoo!  Javi told us several empids were around, and we did indeed see several, but they either didn’t stay still long enough for a good look, or they kept shifting field marks on us (we thought we had a Yellow-bellied with the non-contrasting face, but then it would move to another branch and suddenly be pale below with a very contrasting face)!  Giving up on those we hit the boardwalk for the easier stuff, and got another life bird pretty easily:  Mottled Duck!  Javi pointed out a Wilson’s Plover to us that really blended in, and an Osprey was still hanging around perched on a very odd square-shaped branch!  Clapper Rails sounded off but never showed themselves, unlike the Common Gallinules!  The friendly Rock Pigeons escorted us for much of the way, and I didn’t even see the Collared Dove until I flushed it off the railing!  To the south were many Willets, but also some Ruddy Turnstones that came sailing in. 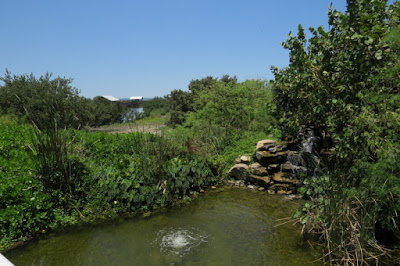 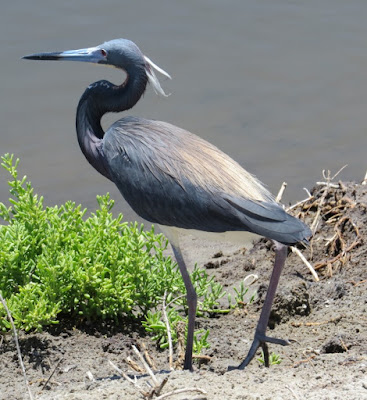 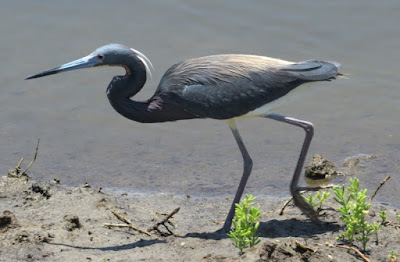 The final leg was more productive, with various herons (a nice look at a Green Heron showing off his “do”), more spoonbills, and a better look at some of the shorebirds in that east pond:  we positively added Greater Yellowlegs and Short-billed Dowitcher (along with a lingering Blue-winged Teal), and a chink-chink alerted me to the fact that a White-rumped Sandpiper was around!  Thankfully we both saw it wheel in (there were two, actually), so that made it an easy ID!  A little more challenging was a duller bird that I suspected was a Baird’s, but I had been fooled by those Whiterumps in basic plumage before, so we waited for this one to be bullied by a Coot into flying a little to reveal that he only had white on the sides, confirming (at the time) that he was indeed a Baird’s Sandpiper!  Alas, the pictures proved I was fooled again, but not by a White-rumped Sandpiper:  this guy was by himself, so size can be hard to judge, but my pictures showed a dumpy, short-billed, short-winged peep that much better fit a Semipalmated Sandpiper...  John was glassing a little bird and declaring, “That’s not a Barn Swallow!”  I got on it briefly enough before it disappeared behind some vegetation to tell it was a Chimney Swift!  A couple on the parallel boardwalk pointed out a big Blue Crab to us, so that was fun!  Surprisingly, we found no Alligators today! 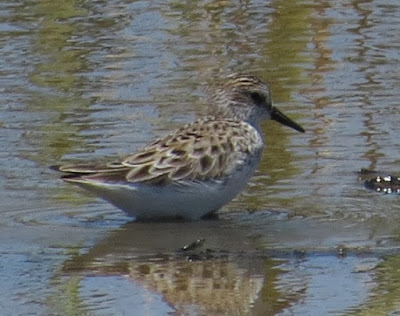 What I thought was a Baird's Sandpiper at a distance looks more like a Semipalmated when looking at the photos; feedback welcome! 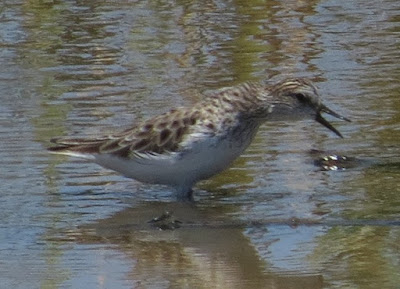 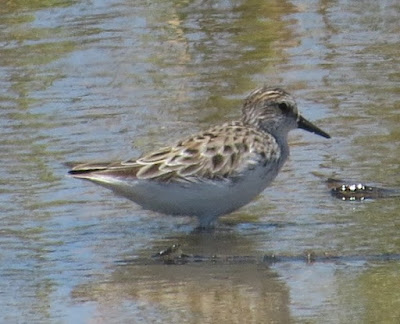 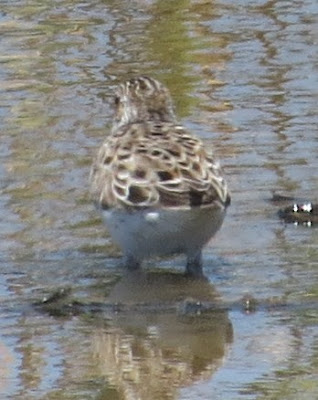 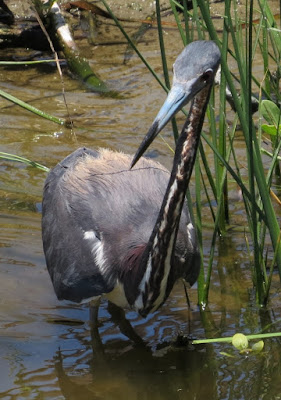 Yet another Tricolored Heron

John was very happy with the day and didn’t necessarily see the need to go back to the Convention Centre (the day before was apparently much better, but today you really needed patience for the birds to show up), so since he needed some open country birds we headed down Old Port Isabel Road.  Despite the recent rains, it still was in decent shape (except for some of those ruts that I think are permanent…), and we hadn’t gone far before his next life bird popped up – a nice Horned Lark!  Continuing on we heard a Cassin’s Sparrow singing and got a look at him skylarking, and down the road John spotted a distant raptor that turned out to be a nice White-tailed Hawk!  He spotted something running across the road way in the distance, and I couldn’t get onto it before it disappeared, but when we got to that point a Bobwhite was “covey calling” right next to the road (unseen, of course), so there’s no doubt in my mind that’s what it was (although John needs a better look to count it J)!  At the same stop both Cactus and Bewick’s Wrens sang, but neither would come out for a look.


We had to scoot after that in order to get home in time, but we were distracted at the Skeet Club entrance by what was probably a Tropical Kingbird but never said anything.  A Golden-fronted Woodpecker bounced across the road and landed in a bush where we could barely make out his zebra back!  After finally getting to the freeway and flying north, a flock of birds was flying to our right, and as he answered in the affirmative to my, “Do they have this; do they have that?” questions, we concluded we had his life White-faced Ibis flying by! J


After a stop at HEB we wheeled in with 92 species for the day!  Bird List: