It was a rather sparse day today with only 33 species, but that was because we were focused on only two spots for the morning, and that primarily for photography at the feeders!  Our first destination was the National Butterfly Center, one of the few nature parks in the Valley that feed year-round; we arrived around 8:30 (which is when they put the food out), checked in with Luciano, and headed on down.  Another couple was already there, the male half which had a digiscoping setup!  (Paul would later engage him in conversation about the subject…)  Besides the ubiquitous grackles and kin, both White-winged and White-tipped Doves were already there chowing down, but we didn’t have to wait long to enjoy Green Jays, Golden-fronted Woodpeckers, Long-billed Thrashers, and even a pair of Altamira Orioles!  A titmouse kept coming in, grabbing a seed, and shooting out before Paul could get a shot of his own, but eventually the bird came in and actually hung around for a few moments!  An Olive Sparrow made a brief appearance, and a little later the Chachalacas finally showed up.  A Groove-billed Ani was calling from the thick woodland, but never showed…  On the mammal end a cute pair of Hispid Cotton Rats came close! 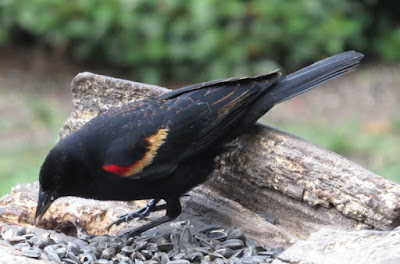 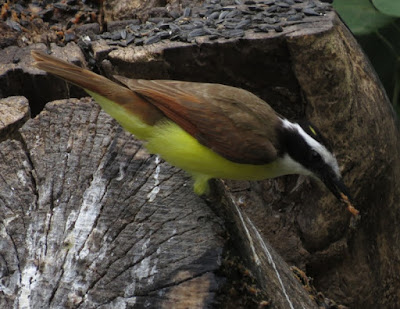 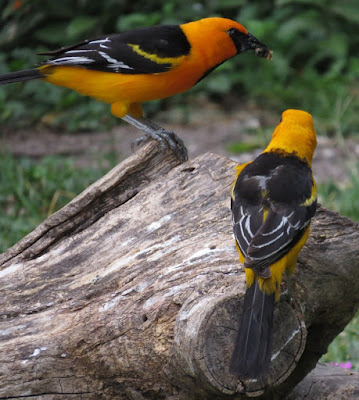 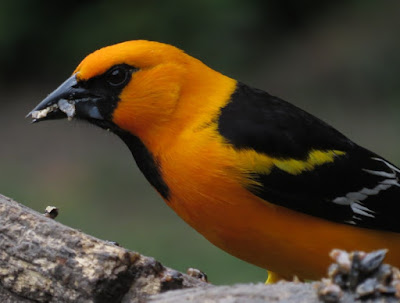 One feeder is almost within touching distance! 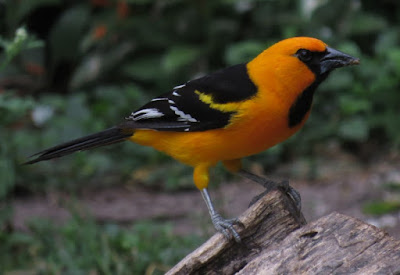 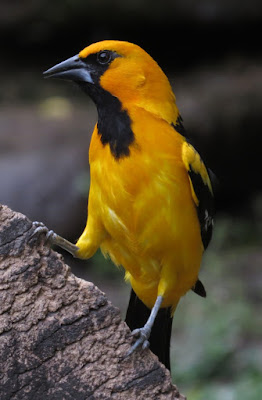 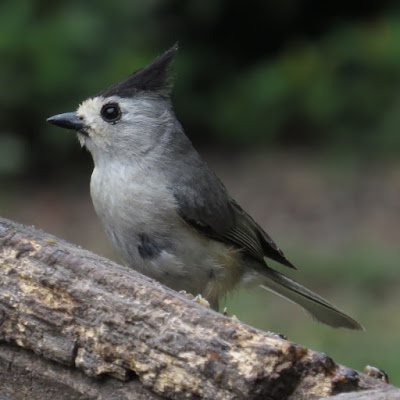 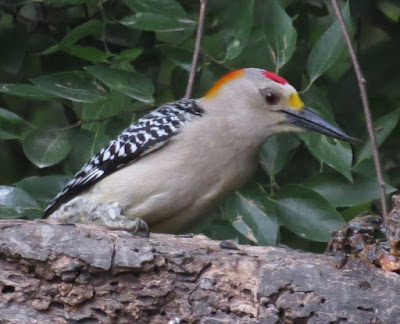 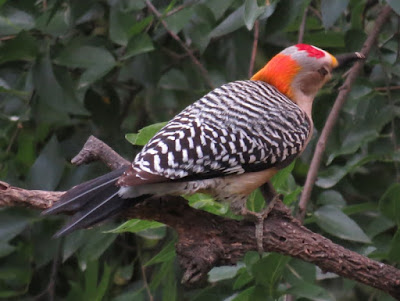 Check out those colors! 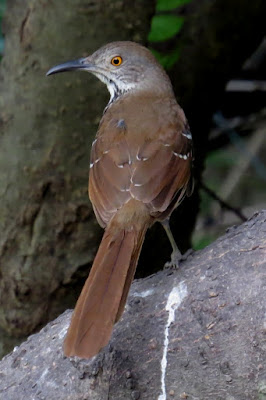 Long-billed Thrasher (above and below) 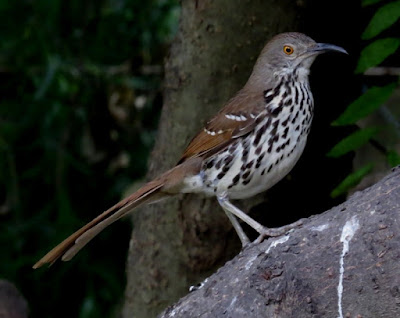 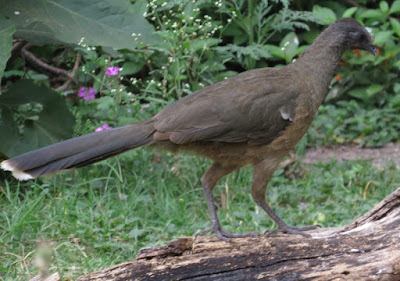 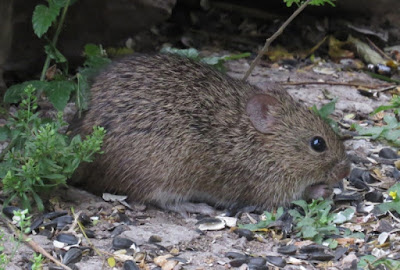 
After a potty break I caught Paul having a conversation with Spike the Tortoise J, and on the way back to the car I noticed that the feeder guy had put oranges out in the meantime, so we gave it another 15 minutes to see what would come in (I was hoping for the Clay-colored Thrush, but no banana…) before heading up to the water feature.  (On the way I was able to point out a singing Dickcissel, so Paul could hear how they got their name!)  Since nothing was immediately coming in there, Paul was anxious to move on, so we headed to Quinta Mazatlan after a taco stop. J


I turned the corner into the drive and declared, “FIELD TRIPS!!!” J  The parking area was literally jam packed with busses and cars, and we noticed kids of all ages (including high schoolers) standing around in groups doing whatever it was they were there for!  After checking in we went straight to the amphitheater (which at that point we had to ourselves except for another couple also with big guns), where we observed lots of Chachalacas, White-winged Doves, and House Sparrows, but that was pretty much the extent of the patrons.  Before long one of the happy kidlet groups descended upon the place (Paul noticed a wheelie box full of binoculars and I assumed they were for the kids), so we made way for them and moved on!  But I remembered that there was a Screech Owl hole somewhere near there, and thankfully two ladies were looking up into said hole and pointed it out to us, where one adult and a full-grown baby were both sitting in it!  That was definitely the highlight of the visit! 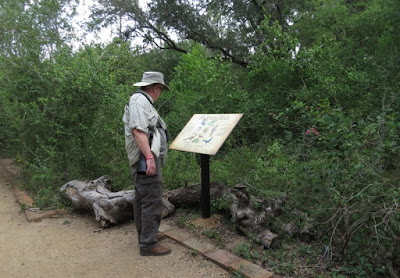 Paul studying up on his birds... 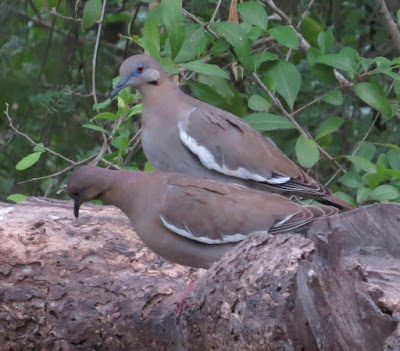 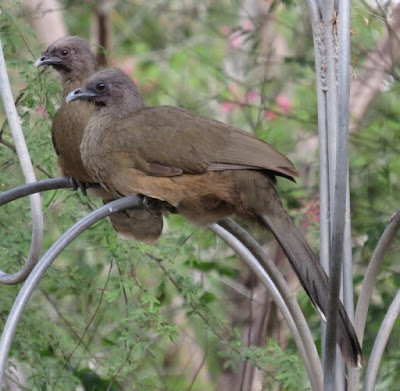 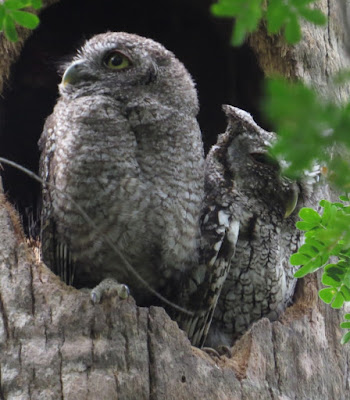 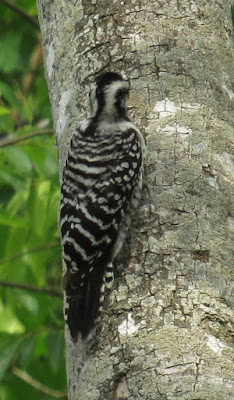 We strolled the trails a little with not much songbird action, so since Paul was anxious to have me help ID some of his pictures thus far, we called it a day and headed back, saying “hi” to park naturalist John Brush and shooting a cooperative Ladder-backed Woodpecker on the way out.  (And as an aside, Paul had spent a few days at Laguna Seca Ranch with Ruth Hoyt before visiting us at the Inn, and his pictures were stupendous; I’m tempted to book a day out there myself sometime!)