Technically cheated when the first bird of the day was churring outside my apartment (Lesser Nighthawk), but soon got on track within Cameron County while heading down New Carmen Road towards my first destination, Resaca de la Palma State Park an hour before dawn, with several Pauraques (2) jumping up from the side of the road!  With the window down I could hear the Common Nighthawks (3) beenting and Couch’s Kingbirds (4) tuning up with their sneezy dawn songs!  Once parked and settled in “Howard’s Chair”, added the dawn choristers one by one as I waited for sunrise:  Brown-crested Flycatcher (5), White-winged Dove (6), Cardinal (7), Mourning Dove (8), Carolina Wren (9), a Mockingbird (10) that gave me fits (almost added several things before realizing who was doing it L), White-tipped Dove (11), a flyover Dickcissel (12) giving its flatulent call, and a Clay-colored Thrush (13) singing softly and then giving its querulous call.  From the open area near the main road a Lark Sparrow (14) was singing loudly enough to be heard, and Green Jays (15) soon added their raucous calls to the cacophony.  An Olive Sparrow (16) started its bouncy song, followed by a Black-crested Titmouse (17), Kiskadee (18), and chorusing Chachalacas (19).  A Great-tailed Grackle (20) finally gave its grating call from somewhere in the park, and a White-eyed Vireo (21) and Common Yellowthroat (22) joined in.  A Brown-headed Cowbird (23) gurgled from behind, and a Golden-fronted Woodpecker (24) finally woke up!  A Chimney Swift (25) chittered overhead as sunrise hit, but while I was disappointed that no Chuck-will’s-widow sounded off this time, I was really shocked that neither Eastern Screech nor Great Horned Owls made a peep!


Headed north to the freeway, adding a singing Eastern Meadowlark (26) in the mesquite savannah, and was thrilled to nab the White-tailed Kite (27) sitting on the wire!  Spotted a Bronzed Cowbird (28) and heard House Sparrows (29) on the way to the frontage road, and logged Rock Pigeon (30), Laughing Gull (31), Black-bellied Whistling Duck (32), and Starling (33) heading down the I-69E towards Brownsville.  Once on the surface streets added Red-winged Blackbird (34) and Tropical Kingbird (35) on the way to Sabal Palm Sanctuary, and once on the entrance road added Ladder-backed Woodpecker (36) and Verdin (37).  A Buff-bellied Hummingbird (38) rattled in the butterfly garden after I checked in and hit the trails, and a Long-billed Thrasher (39) sat up singing.  The next several additions were pretty migrants along the trail:  a snazzy Rose-breasted Grosbeak (40), a gorgeous Painted Bunting (41), a beat-up Tennessee Warbler (42), and a Philadelphia Vireo (43) on the appropriately-named Vireo Trail (with an Indigo Bunting, 44, keeping him company)!  At the new blind a pair of Gray Hawks (45) circled and whistled, and a Green Heron (46) sat on the end of the dead snag.  The water level was pretty low, so nothing was visible, but a little clapping got the Least Grebes (47) to respond!  Continuing on the trail added more migrants:  an Orchard Oriole (48) “nyehed”, and two Baltimore Orioles (49) fed in the same tree with both a Red-eyed (50) and Warbling Vireo (51)! 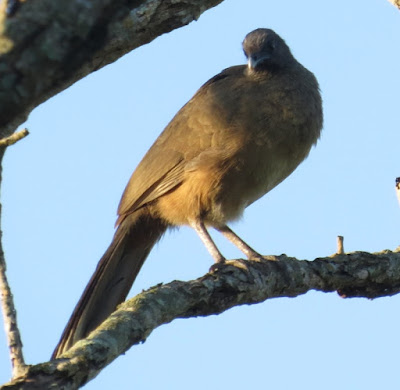 Chachalaca getting ready to chorus... 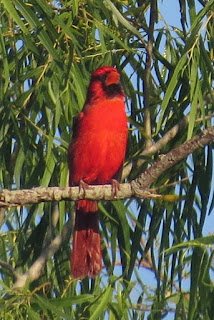 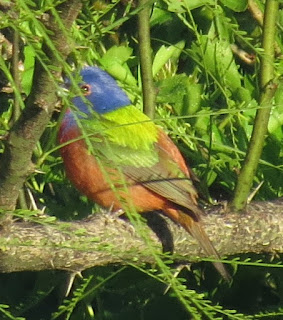 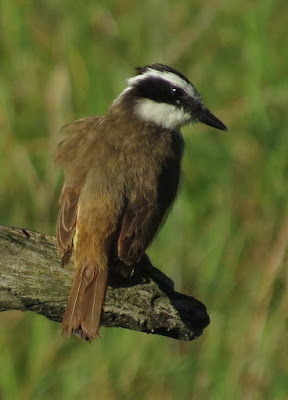 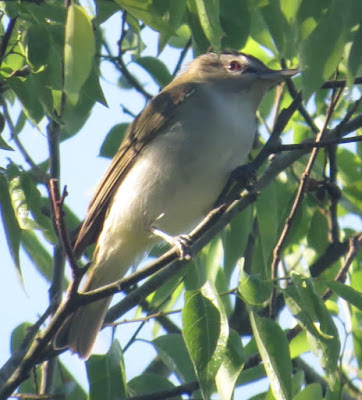 Red-eyed Vireo (and you can actually see the red eye!)

On to Old Port Isabel Road,  adding Harris’ Hawk (52) on the way.  At the first stop a Loggerhead Shrike (53) fed from the wire, and the White-tailed Hawk pair (54) circled in the distance.  A Long-billed Curlew (55) cried and flew, and heard Gull-billed Terns (56) on the way to the next stop.  A Caracara (57) flew in front of the car, and Loma Alta Lake was at such an angle that I could actually see a Shoveler (58) out there!  Heard a Bobwhite (59) in the distance, and Barn Swallows (60) zipped past.  No falcon on the platform, so after adding a singing Willet (61) I continued on, adding a Scissor-tailed Flycatcher (62) and Eastern Kingbird (63) side-by-side on the wire!  A Blue Grosbeak (64) eyed me from the fence, and a Mottled Duck (65) flew into one of the ponds while a Cassin’s Sparrow (66) sang in the distance.  (As an aside, I couldn’t believe I spotted a nighthawk roosting in a tree in the Chicken Coop Yard…)  Said ponds also had Coots (67), Black-necked Stilts (68), a lone White Pelican (69), and some Ruddy Ducks (70).  Continuing on a Bewick’s Wren (71) sang from the thornscrub, and my FOS Botteri’s Sparrow (72) sang right next to the car!  Thankfully the road from then on was dry, but had the proverbial “canyons”, so much so that I was inspired to take a “dash cam” video as Heppy carefully made his way down the road!  Even so we picked up a singing Sedge Wren (73), and while scanning at another stop added Turkey Vulture (74), Harrier (75), and thankfully the Aplomado Falcon (76) shooting across the road and up, up, and away!  At the canal added a Great Blue Heron (77), both Great (78) and Snowy Egrets (79), a Spotted Sandpiper (80), and a wing-drying Neotropic Cormorant (81).  Heard a Whimbrel (82) sound off, and near the end of the road a Savannah Sparrow (83) popped up. 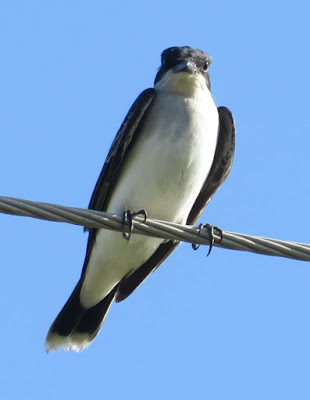 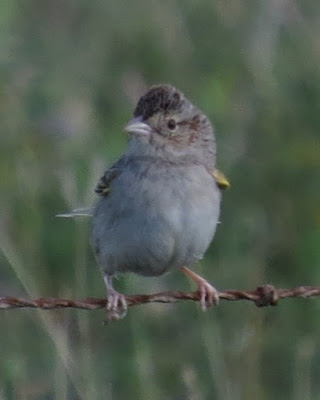 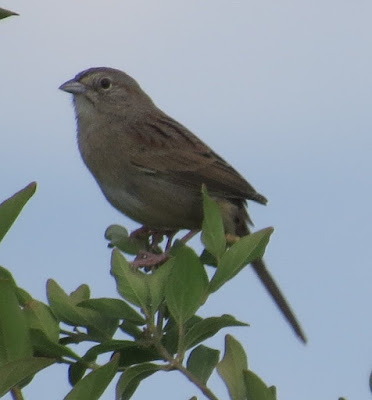 The similar Botteri's Sparrow, best told apart by its song 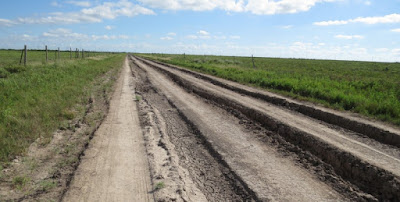 The infamous Old Port Isabel Road with its foot-deep ruts!


Now it was time for the Island!  Added Chihuahuan Raven (84) along SR 100, then headed straight to The Flats.  The tide was out, so was able to drive right up to Least Terns (85), Black-bellied Plovers (86), and Dunlin (87).  A single young Brown Pelican (88) flew by while logging Sanderling (89) and Ruddy Turnstone (90).  Sandwich Terns (91) were trying to impress their mates while Short-billed Dowitchers (92) snoozed.  Royal Terns (93) were also obeying their hormones, while the Black Skimmers (94) were really sacked out!  Was disappointed that the Franklin’s Gulls had “se fued” the joint, but at least picked up a second year Ring-billed Gull (95) before heading around the corner to the Convention Centre! 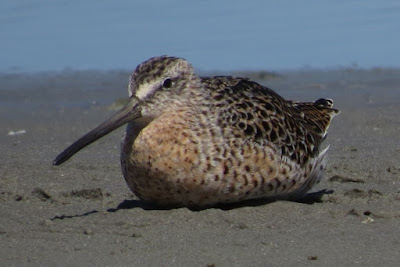 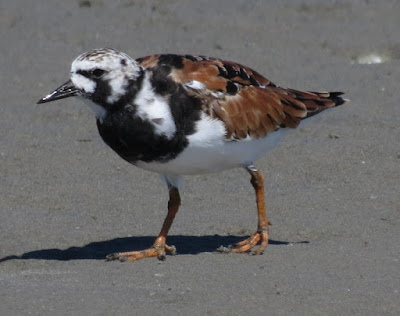 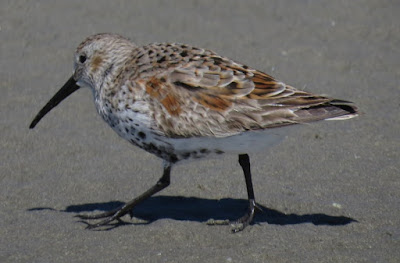 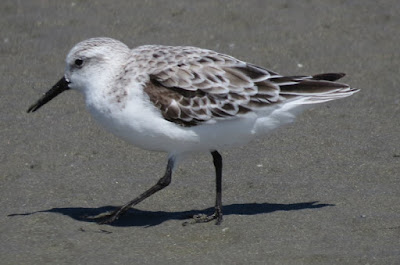 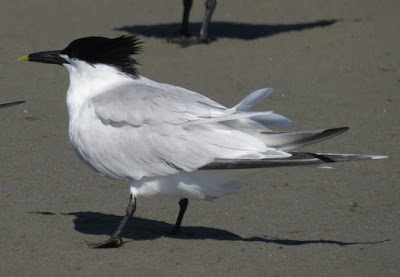 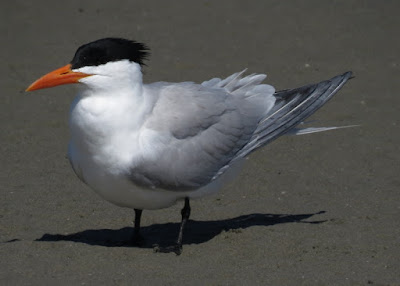 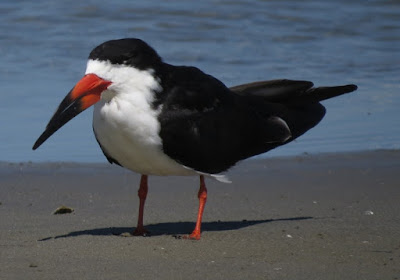 On a recent visit, my friend Pat and I were forced to park on the far side of the circular area due to the mob, but that turned out to be perfect as that circular area was filled with migrants!  So I did the same this time and parked on the far side, working my way towards the building.  Since the winds had shifted and were coming from the south, the migrant show wasn’t nearly as good as it was the last couple of days, but still managed to add the first of many Eastern Wood Pewees (96) while a Collared Dove (97) called incessantly from the building.  A Lincoln’s Sparrow (98) tried to be invisible against the wooden wall, and once on the sidewalk, a Ruby-throated Hummingbird (99) fed in the bottlebrush.  Simon K. was leading a group for the Spring Chirp, and got me on bird #100, a Swainson’s Thrush, plus a female Scarlet Tanager (101)!  (A gorgeous male showed up later and wowed the crowd, along with a stunning Rose-breasted Grosbeak and many Indigo Buntings…)  In the same area was a cute Black-and-white Warbler (102) and a Blue-headed Vireo (103).  A Common Gallinule (104) did its jungle cackle from the marsh, and in the “back yard” the same Black-throated Green Warbler (105), the vagrant Townsend’s Warbler (106), and a stunning Bay-breasted Warbler (107) were entertaining a whole mess of birders (including Norma and the Birder Patrol J)!  A quick look out back added a pair of Little Blue Herons (108) and the white morph Reddish Egret (109), and back in the “garden” a Yellow Warbler (110) showed up at the water feature.  I was getting ready to leave when I almost tuned out a female Summer Tanager (111)! 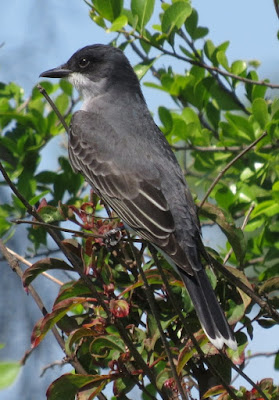 Eastern Kingbird (above and below) 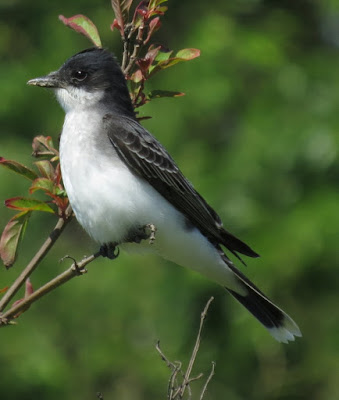 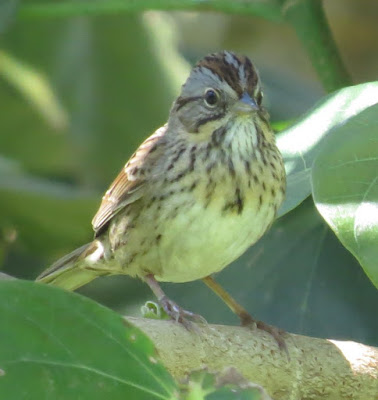 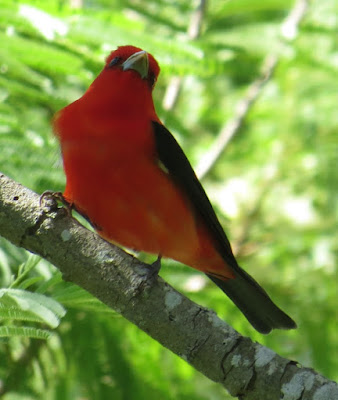 Scarlet Tanager (above and below) 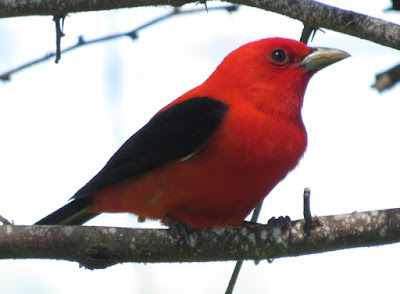 After devouring the rest of last night’s steak (the grackles appreciated the fat portions J) I headed over to the Birding and Nature Center where the Osprey (112) whistled while I checked out the garden area (I thought I had a Gray-cheeked Thrush but just didn’t get a good enough look).  In the “Secret Spot” that Baceliza had shown us during the last good fallout, a Magnolia Warbler (113) showed, but that was it.  Taking the hike around the boardwalk, no “Mangrove” Warbler sang this time, but did hear a crying Sora (114) and several Purple Martins (115) gurgled overhead.  The ubiquitous coots, gallinules, and Mottled Ducks were looking for handouts, and the whistling ducks were in their usual spot, but shorebirds were sparse; picked up a pretty Tricolored Heron (116) there, and miraculously a Least Bittern (117) popped up out of the reeds and tumbled back down again!  Over in the East Pond the Roseate Spoonbills (118) snoozed, and the Stilt Sandpipers (119) were still fighting.  Added a pair of Blue-winged Teal (120) and a Greater Yellowlegs (121) there, and was heading over to the parking lot when I almost wrote off this brown bird on the distant fence as a female grackle before taking that second look and realizing it was a Yellow-billed Cuckoo (122)! 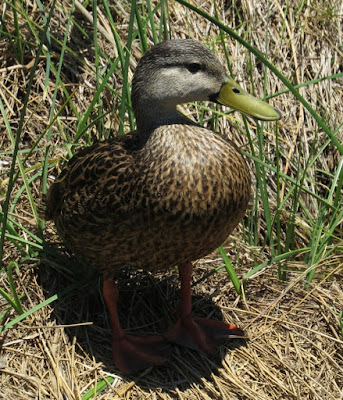 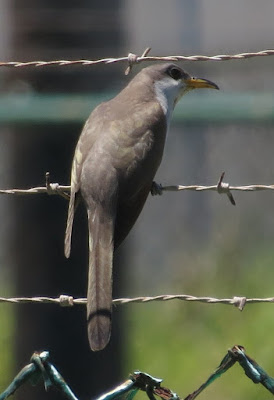 Yellow-billed Cuckoo (above and below) 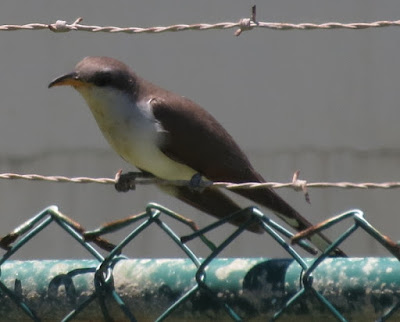 Sheepshead was next, where I ran into the Spring Chirp bunch again, this group led by Tony Henehan from Las Palomas WMA!  It was pretty quiet, and the normally reliable Northern Waterthrush didn’t show, but what was better than that was the Ovenbird (123) that popped up on a branch!  I needed help from others spotting additional stuff:  a Catbird (124) hiding behind the “dark side” drip, a Yellow-breasted Chat (125) showing only its tail in a small tree before darting across the road, and a Wood Thrush (126) really hiding behind the “sunny side” drip! 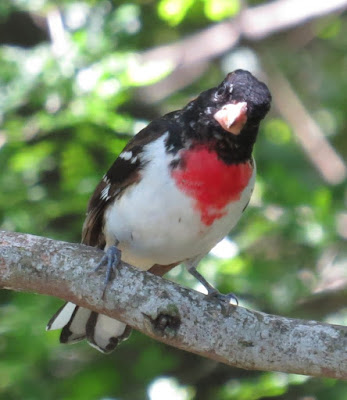 Headed to the “Cannon Road Loop” next, where the first stop (speaking of Las Palomas WMA) was the resaca at the Ebony Unit on Rangerville Road.  Only added a Pied-billed Grebe (127) here, but also had plenty of Ruddy Ducks and gallinules, plus the Least Grebes.  Heading down Jimenez to Weaver Road added a Cattle Egret (128) flying towards me, and at the sod farms a pair of Killdeer (129) had adorable babies feeding near the ditch!  Horned Larks (130) called and sang, and was beginning to sweat adding any grasspipers as most of them were way out there and impossible to ID even with the scope!  But no sooner had I thrown the scope back in the car and started off when up popped a Baird’s Sandpiper (131) right next to the road, joined by a Least Sandpiper (132)!  Now that’s how I wanna see these things!  It looked like there were lots more further down, and thankfully the Buff-breasted Sandpipers (133) were close enough to ID without the scope, but there were some out there that could have been Pectorals, but I just couldn’t tell.  Sadly no Golden Plovers this time, but one of the best sightings here wasn’t new for the day list, but a rare chance to see both Whimbrel and Long-billed Curlews side-by-side! 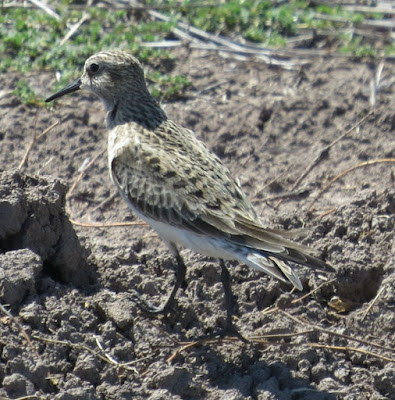 Baird's Sandpiper (above and below) 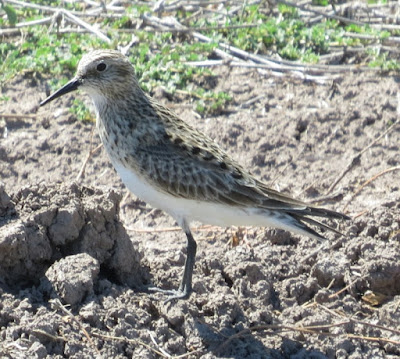 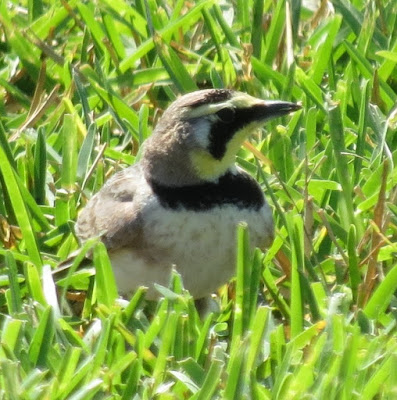 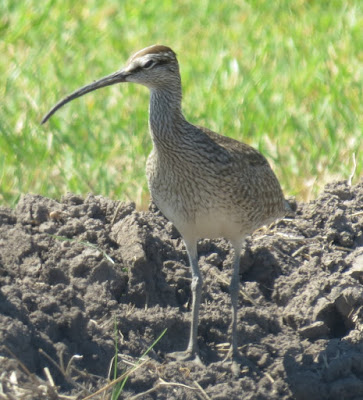 Whimbrel (above and below) 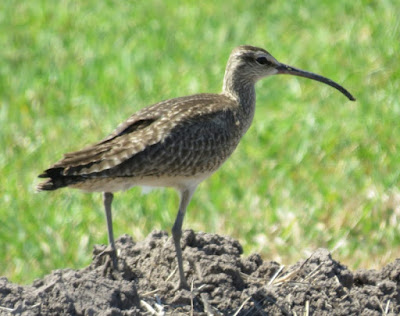 The last stop of the day was Tiocano Lake, adding a flyby Curve-billed Thrasher (134) in La Feria.  Again I was sweating as the wetlands looked rather birdless, and a guy was working on his car right where I usually park and survey the open marsh!  So I continued on down to the end of the wetland area and turned around, slowly checking out the west side, and thankfully our Fulvous Whistling Ducks (135) were still there!  By the time I crawled back to “my” spot the guy had left, so I settled in, adding Rough-winged Swallows (136) to the list.  I was despairing of hearing any rails when I couldn’t believe my eyes:  there was a King Rail (137) actually walking across the road!!  In all my visits here that was the first time I had actually seen one!  After 15 minutes I rolled out, adding a rickety-racking Marsh Wren (138) as the last bird of the day (couldn’t even sneak in an Inca Dove back at the apartments… L)!
Posted by Alamo Inn B and B Gear and Tours at 4:52 PM