The forecast called for heavy rain, but it was my last chance at spring migration, so I planned on heading to the Island regardless.  Deb was the only one brave enough to join me, so she picked me up and over we went!


We went straight to the Convention Centre, and it was almost like déjà vu: we found the exact same parking spot we had when she brought her friends along a few weeks ago, and as we headed for the bushes, not one, but two Chestnut-sided Warblers greeted us!  The rest of the bushes weren’t terribly birdy, so we headed straight to the main garden area; Cedar Waxwings were in the tall trees, and Black-bellied Whistling Ducks guarded the boardwalk railing!  There were a handful of potential year birds reported, and the first one, a lovely American Redstart, popped up and flashed his tail nicely!  The faithful Northern Waterthrush was bopping around, and a funky warbler (most of them were wet) hopped around in the foliage that we finally decided was a young/female Blackpoll Warbler (we saw a male later just to be safe J).  We shortly ran into my friend Alicia, and shortly after that the rest of the Arroyo Colorado Audubon (ACAS) crew as they also figured the conditions were good for migrants!  But before long it started to drip, then rain pretty good, so we all sought shelter under the south-facing awning!  Those who braved the drips found a couple of pewees they were ruminating over… 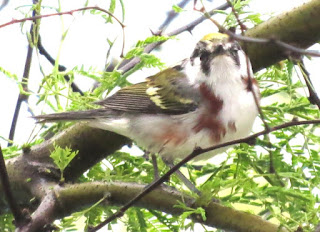 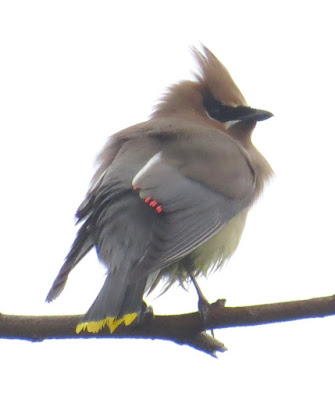 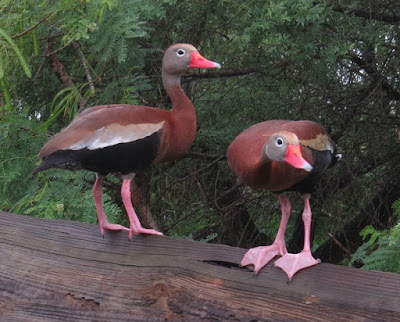 
When it finally let up we decided to hit the boardwalk, where we checked the East Pond first as, on a previous trip, Peggy had told us that White-rumped Sandpipers were hanging around.  Thankfully, we found one of them feeding very close to shore, so that Deb could even see the chestnut base to the lower mandible!  There were also a couple of Semipalmated Sandpipers bullying the Leasts, plus a single Stilt Sandpiper hanging around.  About that time a Rare Bird Alert (RBA) came over my phone that Dan Jones had found a Purple Gallinule at Sheepshead, so we dropped everything and headed over there!  On the way back to the car a Gray-cheeked Thrush popped up, another year target! 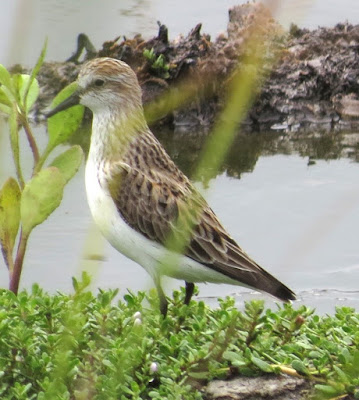 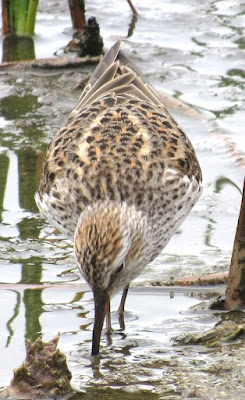 White-rumped Sandpiper (above and below) 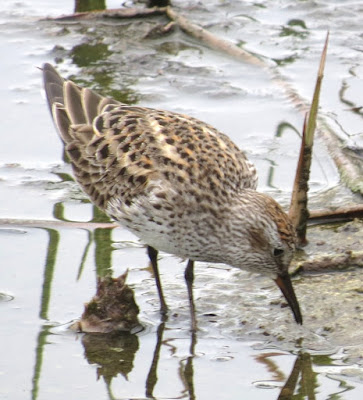 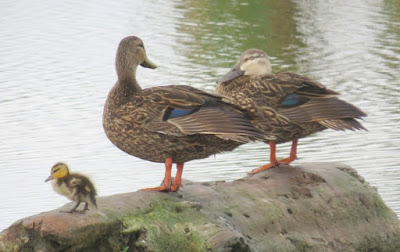 Somehow some of the ACAS folks beat us over there, and we were greeted with, “Well, it was right here, but I think we scared it into the grass!” L  Thankfully it was still around and poking its head up periodically, so that was yet another year bird in the bag (and a rather rare one at that)!  The migrant activity was starting to pick up, with a brilliant Blackburnian Warbler, a Philadelphia Vireo overhead, a Red-eyed Vireo (Deb said she even saw the red eye J), and even a Common Yellowthroat (Deb called him the Lone Ranger J)!  An Acadian Flycatcher (another year target) put on a nice show (thankfully Dan came to the rescue as this guy didn’t have much of an eyering but showed all the other pertinent field marks), and “around the corner” we were treated to a couple of stunning Magnolia Warblers feeding on the ground and a Chestnut-sided Warbler that came within touching distance!  We were just about ready to leave when Mark Esparza called us back as he had a Mourning Warbler, but of course the thing didn’t show for us… L 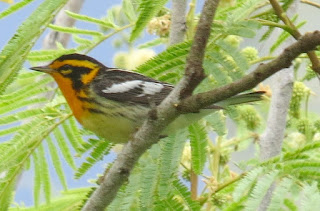 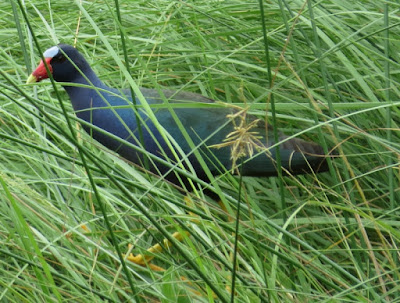 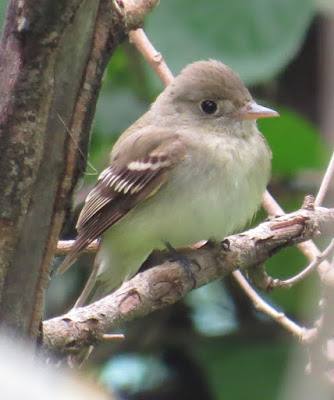 Acadian Flycatcher (above and below) 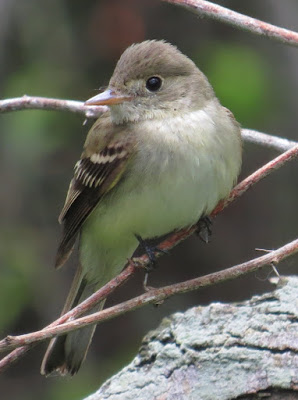 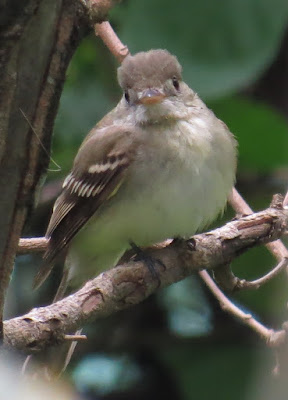 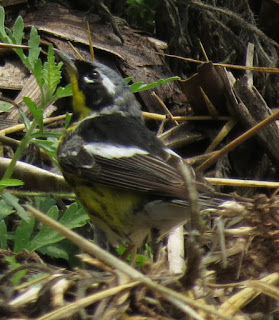 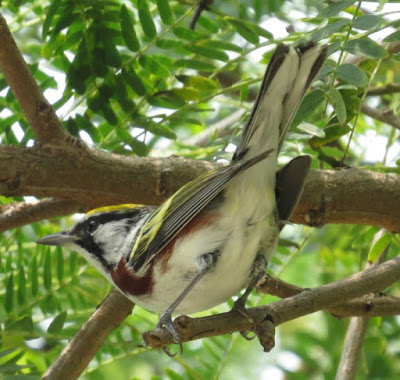 We decided to head back to the Convention Centre as more people were reporting that “migrants were dropping all over SPI” (and the Birding Center was packed with people attending the alligator release, so we avoided that)!  No less than three Red-eyed Vireos were feeding in the taller trees next to the sidewalk, and an Ovenbird showed up at the water feature.  In the “back yard” a couple of Bay-breasted Warblers were showing nicely, and another funky warbler overhead had us puzzling for a long while until it allowed a better look, and revealed herself to be a female Magnolia (as a male was also nearby).  A Yellow-billed Cuckoo flew in, a couple of female Summer Tanagers made a showing, and both Veeries and Swainson’s Thrushes hopped boldly close by!  A return trip to the boardwalk (as the previous trip had been pre-empted J) took us towards the pier where lots of Eastern Kingbirds were streaming past, a Black-crowned Night Heron flew by, and Deb spotted a stunning Yellow-crowned Night Heron hiding in the mangroves!  The Prairie Warbler made a return showing, and shortly after I posted the sighting on the RBA, here came Dan double-timing it down the boardwalk as he still needed it for the year! J 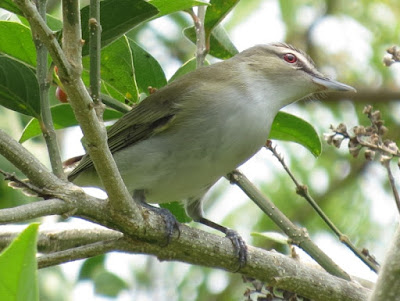 Red-eyed Vireo (above and below) 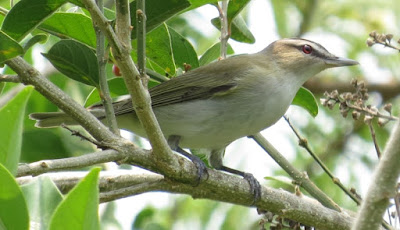 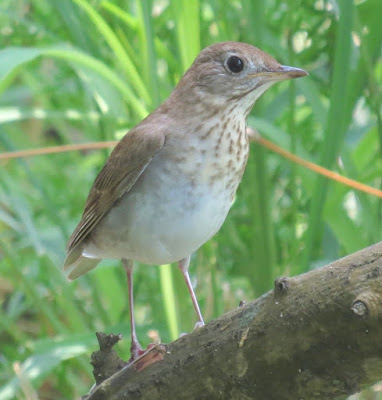 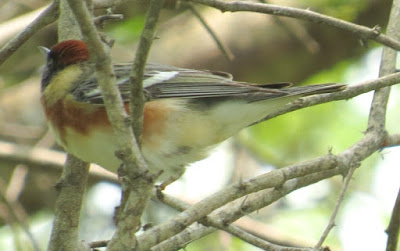 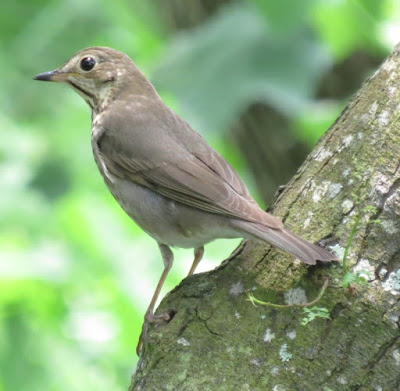 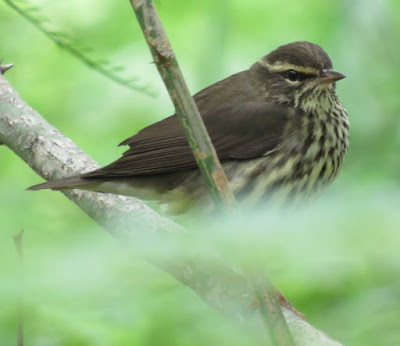 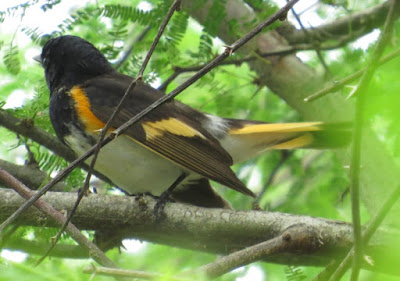 American Redstart (above and below) 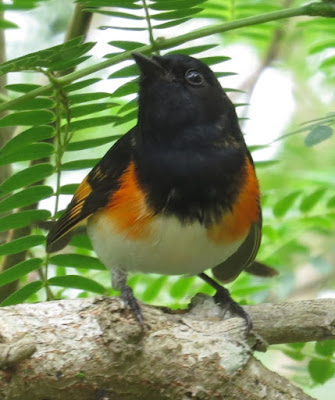 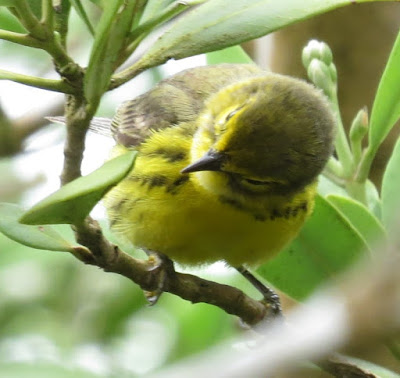 My beeper went off about that time, so we headed back to Alamo, logging a Caracara and a lovely Roseate Spoonbill flying over SR 100 on the way!  We ended up with 79 species for the day.  Bird list: