Jean from the Los Angeles area (a man – there’s a story behind the spelling J) had booked three days of guiding primarily to see songbirds, so the plan was to go to the Island on days with decent fallout conditions (i.e., a north wind at the very least), and local migrant traps when the conditions weren’t all that hot.  Today was one of the latter, so we hit Quinta Mazatlan first.  The trails were pretty quiet, although we did kick up a Swainson’s Thrush at one point.  We wandered into the amphitheater area, where I couldn’t believe my ears:  the Crimson-collared Grosbeak was still there, giving her very robust “Wheeeooo!” call!  Several other birders (including Ian and Julie again J) were also there trying to spot her in the thick foliage, but I was convinced we’d have a better chance if we simply waited for her to come into the feeder area.  Sadly, she never did L, but we at least got to enjoy the regulars, like the Chachalacas, Green Jays, Kiskadees, the hummingbirds, and all the doves, plus Chimney Swifts and Green Parakeets shooting over!  From there we wandered into the Ebony Grove just to see what we could kick up, and were entertained by the Black-bellied Whistling Ducks trying to defend the tops of the dead palms for nesting sites!  Aside from that it was pretty quiet, so we headed on to the National Butterfly Center. 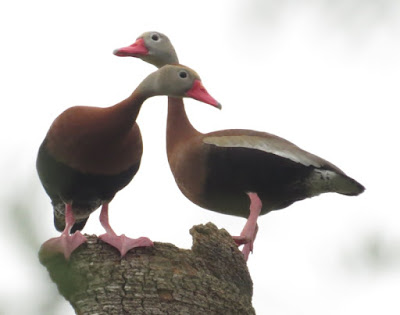 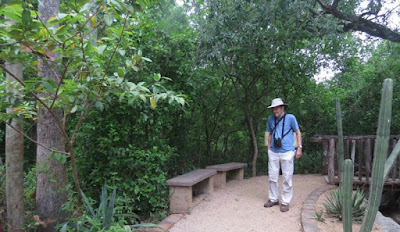 Jean on the trail

We took the back way along Old Military Highway, where we had great looks at displaying Scissor-tailed Flycatchers!  We made a brief stop at the bridge over the canal, where we got in-your-face looks at both Cliff and Cave Swallows, but they were too fast for Jean’s camera!  (We also got the Black Phoebe for the day, but that was a backyard bird for him… J)  At the center we were about an hour late for the feeding, but figured the birds wouldn’t have devoured everything in that time, so headed on down and enjoyed the show:  besides the icterids were Chachalacas, Green Jays, Long-billed Thrashers, and a very bold Clay-colored Thrush!  But the show-stopper is always the Altamira Oriole that comes in!  After getting our fill at the feeders, we wandered the garden area and had both an Altamira and Baltimore Oriole together, and a pair of Couch’s Kingbirds was being very noisy and flighty!  But the highlight was an Olive Sparrow “hidden in plain sight” in a bush, very close, and just singing away – what a cutie!  After paying our respects to Spike the Tortoise we continued on to Wallace Road. 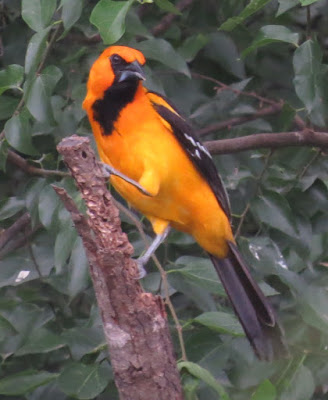 Altamira Oriole (above and below) 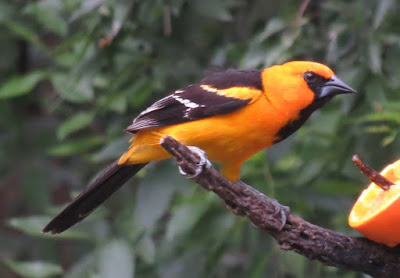 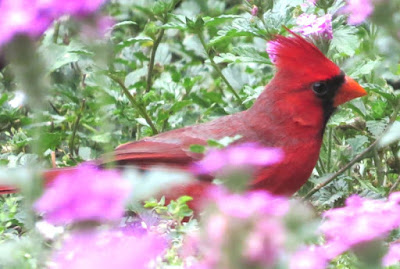 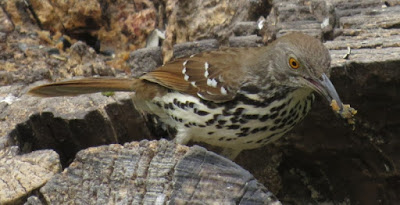 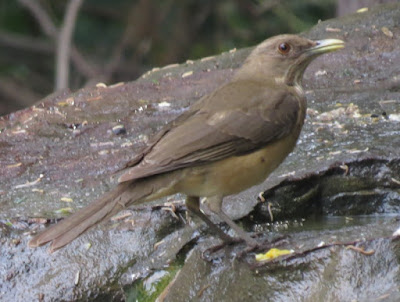 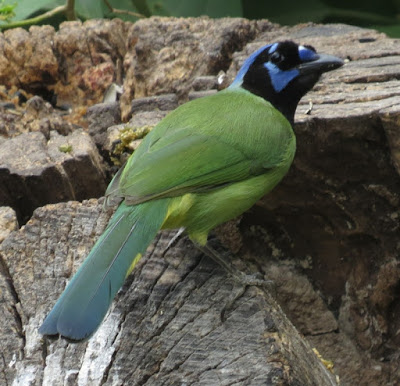 Green Jay (above and below) 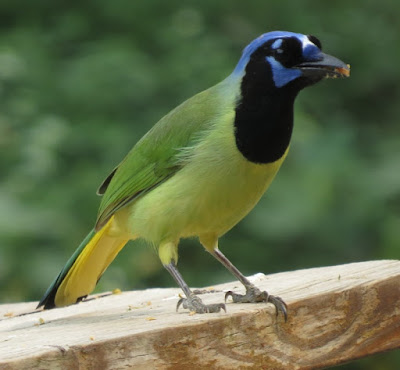 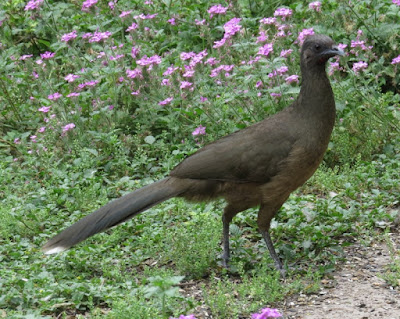 Plain Chachalaca (above and below) 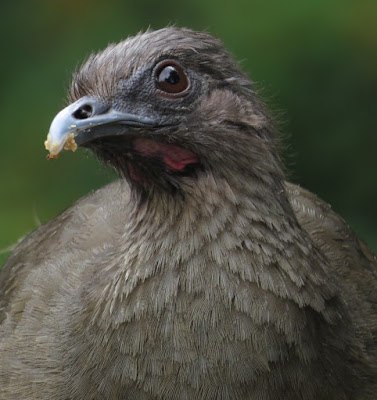 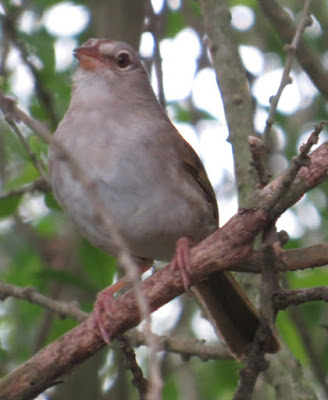 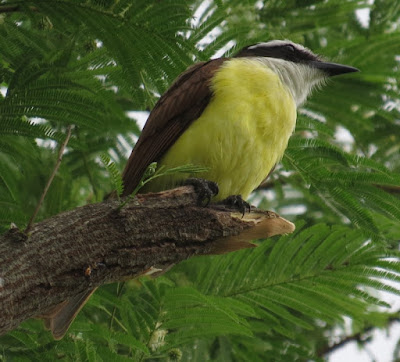 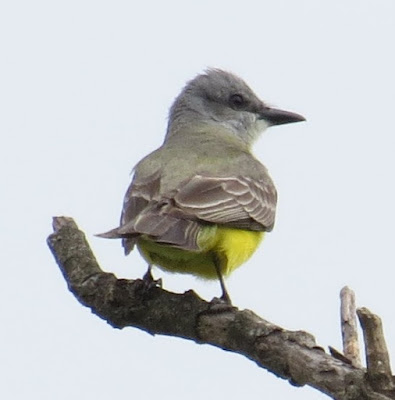 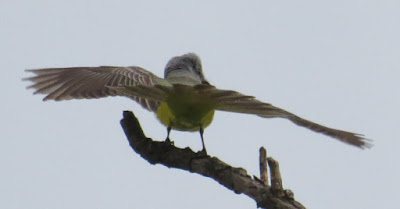 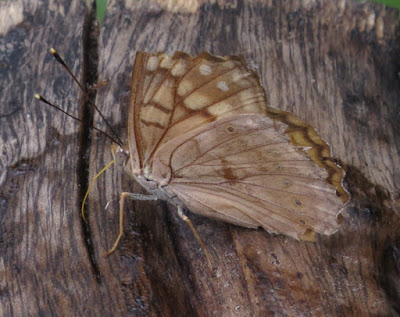 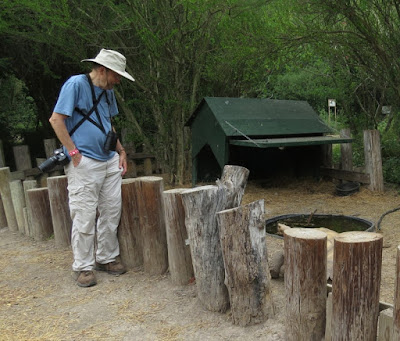 Jean enjoys a visit with Spike the Tortoise

You never know what you’ll find along this road, but we at least picked up the requisite Horned Larks and Lark Sparrows near the ag fields, plus a Blue Grosbeak on territory!  The wetlands were very productive with both grebe species and several Anhingas, plus the usual coots and gallinules and a Sora sounding off.  Caracaras were all over, and further along in more ag fields (and roadside sunflowers) we had a knockout male Lesser Goldfinch, and a Dickcissel came tearing in and perched close to the car!  One of the best birds, though, was in the thornscrub near the end of the road – a curious Groove-billed Ani! 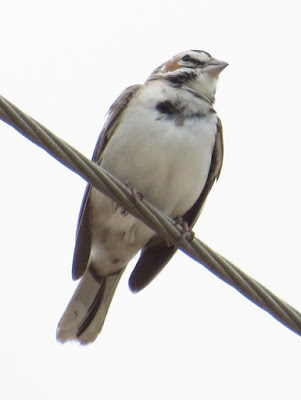 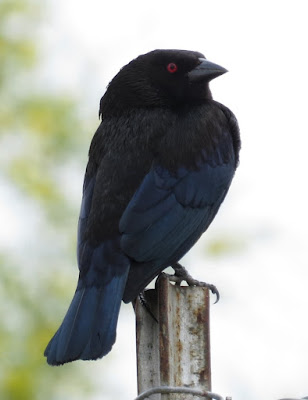 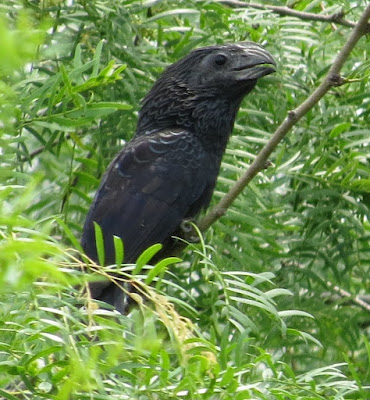 We still had time to kill so I continued onto Laguna Seca Road, which was lousy with Scissor-tailed Flycatchers!  We kept hearing Bobwhite, which was something Jean really wanted to see, and one finally made a brief appearance.  We had stopped for something else when a Roadrunner pair suddenly appeared, and I think Jean briefly saw a Cassin’s Sparrow skylark.  We had a nice look at a Swainson’s Hawk, a Black-crested Titmouse on a wire (!), several Pyrrhuloxias, and finally a Painted Bunting on territory!  A Loggerhead Shrike allowed Jean to get him on “film”, and heading to the freeway via Miller Road a Red-tailed Hawk took off in front of us, but I didn’t get a good enough look to tell if it was the resident “Fuertes’” race. 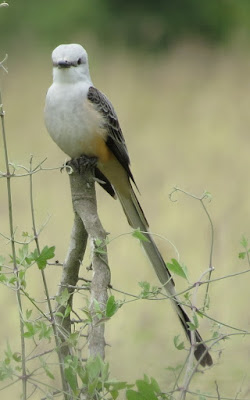 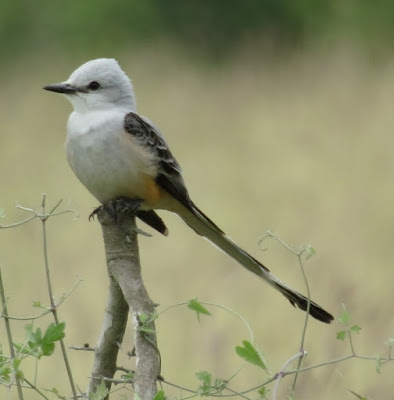 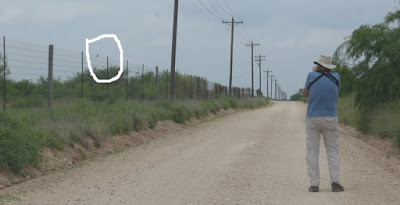 We still had a little time, so decided to quickly swing by Edinburg Wetlands.  We had a nice little selection of shorebirds on the South Pond with Least, Spotted, and Solitary all represented, plus the usual Black-necked Stilts and mob of Neotropic Cormorants.  The North Pond had the usual egrets, but it was nice adding the young Roseate Spoonbill (I’m assuming it was the same bird I had on my Birdathon) and a family of Mottled Ducks, complete with cute little ducklings!


Headed home after that with 87 species for the day!  Bird list: