Conditions still weren’t great for the migrant show, so I thought we’d head at least a little that way by focusing on the Weslaco parks, starting with Estero Llano Grande!  Things started off with a bang with an Altamira Oriole in the parking lot, and a Brown-crested Flycatcher giving a strained look along the WMA entrance road!  Heading back into the Tropical Zone, I was hoping that the Carolina Wren would show (since he had a nest), but Jean was more interested in the singing Blue-headed Vireo, so we focused on finding him.  But in the process of pishing at him, the Carolina wren came in right overhead, singing away!  A Baltimore Oriole chattered unseen on the way to the feeders, where we had lots of Cardinals and doves.  A 15 minute vigil at the Drip was fruitless, so we headed to the Indigo Blind, where there was a lot more action, especially as the doves were trying to intimidate one another; the Whitewings were even trying to shoo the squirrel off the cage feeder! J  The male Golden-fronted Woodpecker was a hit, and outside we heard Cedar Waxwings and the Red-crowned Parrots flying over. 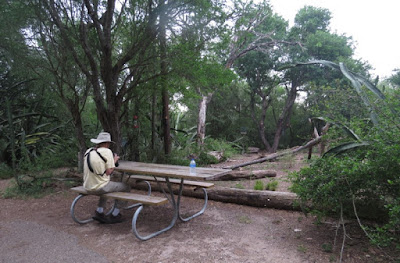 Jean at the open feeders 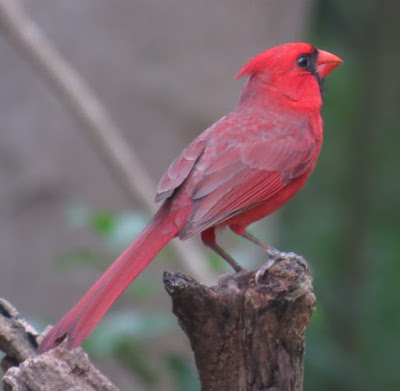 Several shots of the male Cardinal at the Indigo Blind 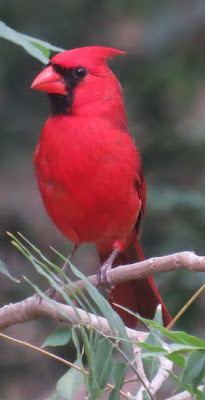 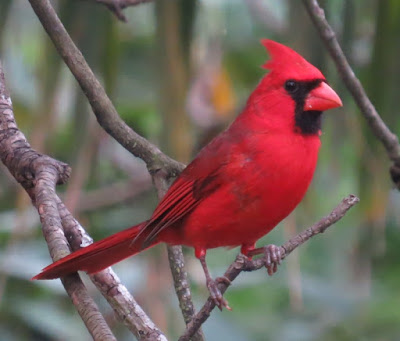 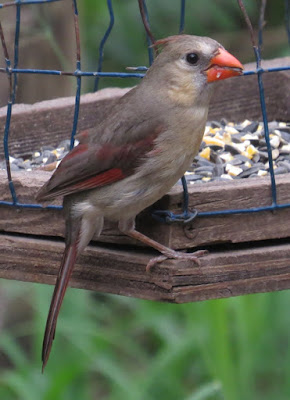 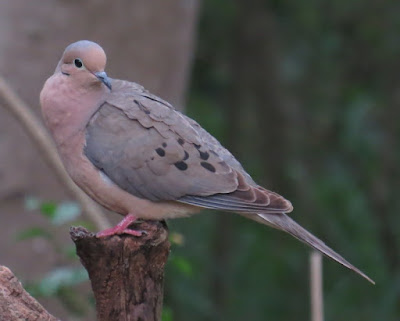 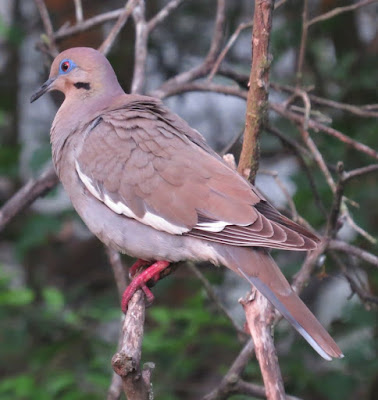 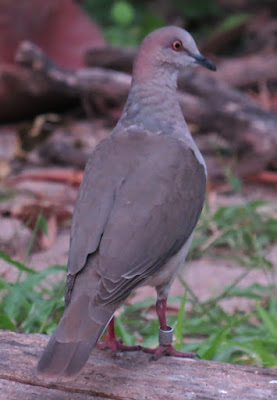 After that we checked in; nothing much was in Ibis Pond, so we headed over to Dowitcher Pond where a young ranger was leading the bird walk.  Here we added Black-necked Stilts and White-faced Ibis (until proven otherwise, I told Jean J).  Continuing on a Great Crested Flycatcher was calling along the Camino de las Aves, but since he was distant, we headed on to Alligator Lake.  I warned Jean that, since the Pauraque was nesting, she might not be as close to the trail as she usually is, and that proved to be the case as we looked and looked but just couldn’t find her.  The bird walk caught up with us where the ranger (and I even asked her name and promptly forgot it L) said that Huck had told her that the Pauraque was against the “big black log - difficult, but visible!”  Of course that started a good-natured debate about which big black log J when suddenly one of the participants exclaimed, “Oh!  Here it is!”  And there she was, right next to the trail, but very alert (the ranger figured she had just flown in…)!  So everyone tried to get their pictures without spooking the thing…  A Green Kingfisher made a racket coming from the direction of Grebe Marsh as we were leaving, but we couldn’t find it… L 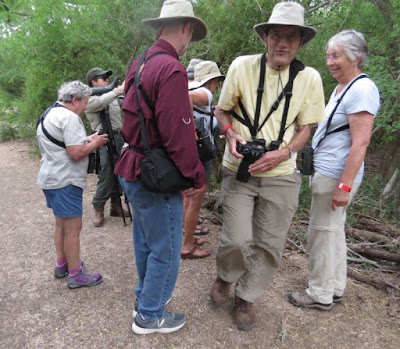 
Next stop was Frontera Audubon Thicket, as this little jewel of a place in the middle of urbana can often have some good migrants!  Ironically there was more butterfly action at the water feature with a Texan Crescent posing nicely for pictures, but the Buff-bellied Hummer at least came in to the feeder!  It was actually pretty slow in woods:  we heard a Yellow-breasted Chat, and Jean gave me a crash course on the Washingtonian Palms sharing the space with our native Sabal Palms (I had forgotten that Washingtonians were the native palms we had in Anza Borrego in San Diego)!  We found the White-tipped Dove nest (if you care to call it that) near the pond overlook, and a Beardless Tyrannulet sounded off near the cemetery, but he of course was impossible to spot.  A Red Admiral posed for pictures along the trail, and a brief sit at the feeders yielded a Black-crested Titmouse while we watched a Kiskadee making a nest practically overhead!  Heading across the boardwalk, both of us were too slow with the camera to catch the two Kiskadees flashing their yellow crowns at each other!  Back at the water feature we once again ran into Ian and Julie, who had been visited by a Nashville Warbler (he showed me the picture J)! 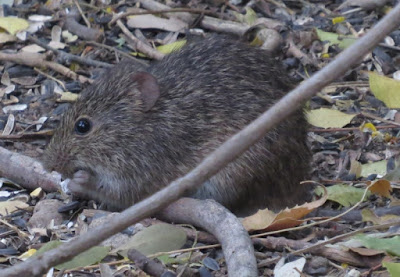 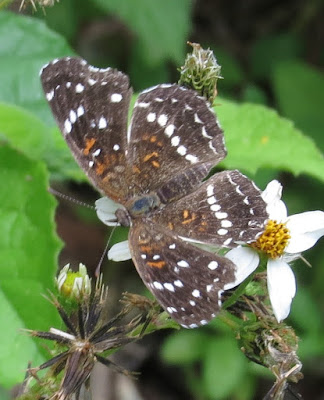 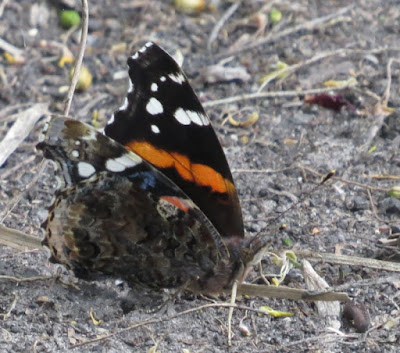 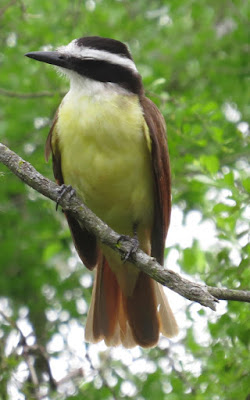 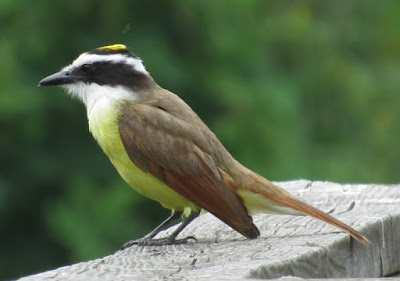 Showing a bit of his yellow crown

Since migrant shorebirds were on the wish list, I figured road birding the Cannon Road Loop would be a good way to end the day.  Of course the woods were rather quiet by then, but we did manage to bag both species of “yellow-bellied” kingbird along here, and some nice Lark Sparrows posed along the fence lines.  Adams Garden Reservoir was absolutely devoid of birds, so we continued north on the loop until I heard a Dickcissel singing from the nearly-barren field next to us, but try as I might I couldn’t spot the perp, and he sounded close, too!  He was – the silly thing was on the wire over the car! J 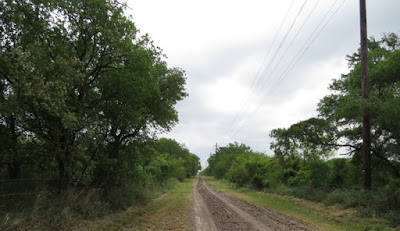 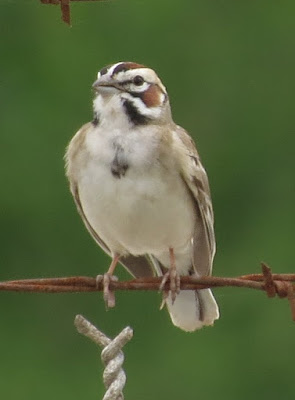 Lark Sparrow (above and below) 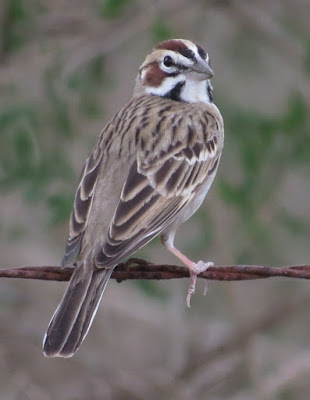 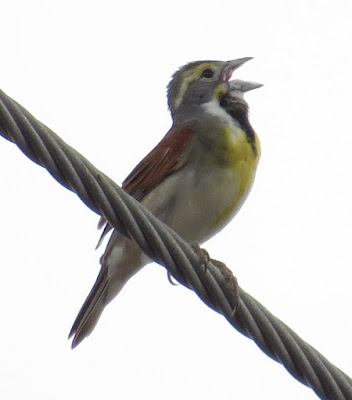 From there we headed up and over to Weaver Road, and that was the best stop of the day:  besides the Semipalmated Plover we had on the north side of the sod farms, the fields were just full of Swainson’s Hawks of all colors!  We crawled over to where another birder was also enjoying the show, and from that vantage point (although it was somewhat in the sun) we were able to pick up several grasspipers that included the always-a-hit Buff-breasted Sandpipers, bunches of Pectoral Sandpipers, several Lesser Yellowlegs, and my FOS Baird’s Sandpipers!  I was bemoaning the fact that apparently the Golden Plovers had vamoosed, when a flock of Pecs apparently heard me and said, “Follow us!  We’ll show you where they are!” and then promptly flew south and landed right where said Golden Plovers were hiding! J 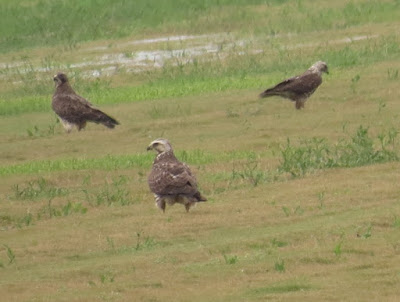 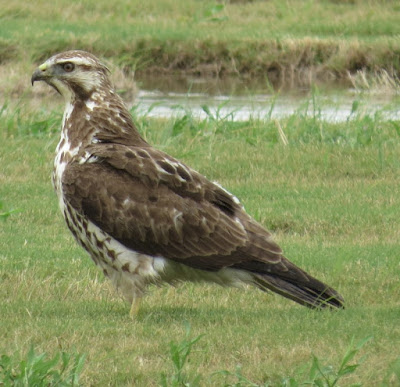 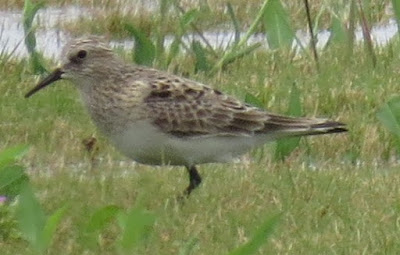 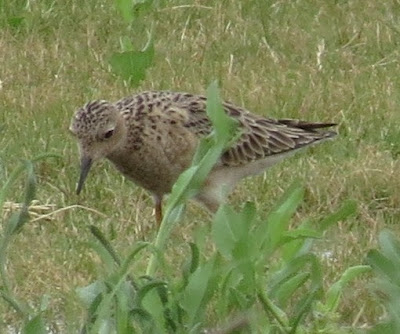 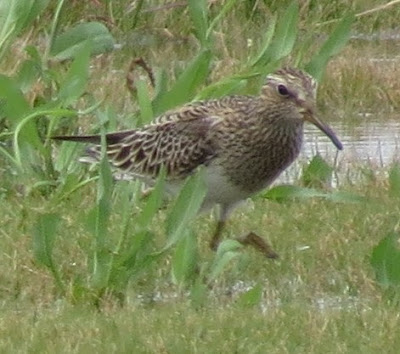 To finish the loop we checked out Rangerville Resaca (which had nothing) and then the Ebony Unit of the Las Palomas WMA, where a strange-looking female scaup had me wondering if it was a Greater, as she had the white smudge on the cheek and a somewhat blocky head, but I wasn’t 100% convinced.  Other than that we had the somewhat reliable Ruddy Ducks, Least Grebes, and Common Gallinules. 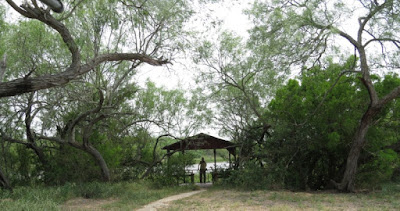 Jean at the overlook at the Ebony Unit 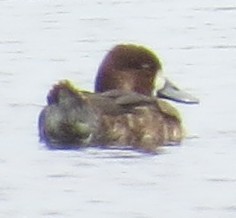 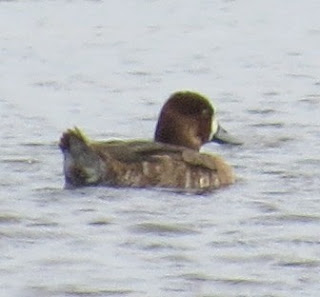 We still had time to kill, so since King Rail would be a life bird (although I warned him that seeing one was nearly impossible), we swung by Tiocano Lake on the way home.  Unfortunately we didn’t even hear one this time, and I was really despairing of seeing much of anything there until I went to the north end, turned around, and slowly rolled along the road – and suddenly there was a group of Fulvous Whistling Ducks!  A flyover Little Blue Heron was good for the day, but even then we still had a few minutes, so we made a quick stop at Donna Reservoir – nothing to add but Cattle Egrets on the way. 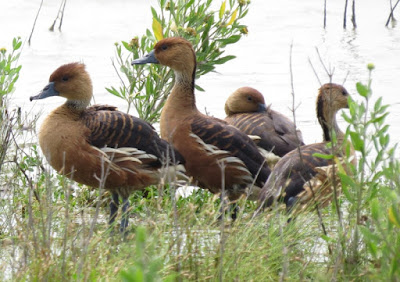 We find Fulvous Whistling Ducks instead!

Fell short of yesterday’s total by two birds with 85 species for the day!  Bird list: