For my last adventure with Mike, we headed out to explore the back roads of Willacy County.  Since he showed a liking for “bushy birding” (and he still needed that perfect Verdin photo), I opted to do the Santa Monica Wetlands route first thing.  The route I survey starts in Willamar on the corner of FM 490 and FM 1420 and heads south, but for guiding purposes the only profitable stop is the canal, and we hit pay dirt this time!  Lines of White Pelicans and cormorants of both flavors were constantly filing overhead, and we had a nice mix of water-related birds including Great Blue Heron, Mottled Ducks, Spotted Sandpiper, Common Yellowthroat, and even a pair of Green Kingfishers!  The pelicans were flying low enough that you could hear their wing whistle! 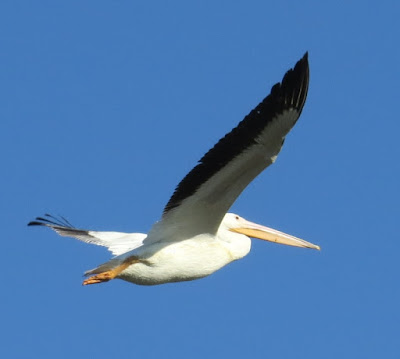 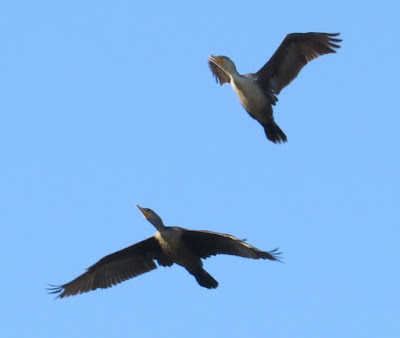 Once we got on dirt Flores Road we started the crawling bit, although I did stop in the general area where I had had Audubon’s Orioles in the past.  We just had a whistling Altamira this time, and as we crawled along we added the normal thornscrub fare.  When the road turned south and became Citation, we saw a string of geese in the distance, and as we got out to look, the more we looked, the more strings came into view, until we figured we had at least 200 Snow Geese flying by!  A couple of flocks came close enough that I could discern a smaller Ross’.


Making the turn onto unmarked Wildlife Drive (which accesses yet another tract of the Lower Rio Grande NWR), we stopped at every Verdin chink until finally one came right out in the open in perfect light, and Mike finally got his picture!  I was so relieved!  An Olive Sparrow made a brief appearance, and I also heard the WheeK! of a Beardless Tyrannulet; what surprised me was that eBird didn’t flag it (as it does for Cameron County), but after consulting the TOS Handbook I saw that it’s the coastal areas that it doesn’t inhabit; they occur all the way up into the King Ranch!  Harris’ Hawks were as cooperative as ever, watching us from the power poles, and at one stop a pale belly gliding by behind the trees turned out to be a Harrier scattering everything! 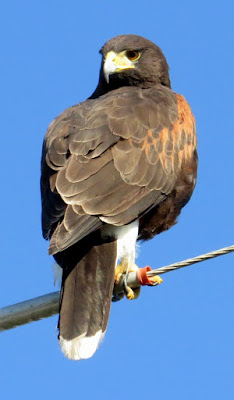 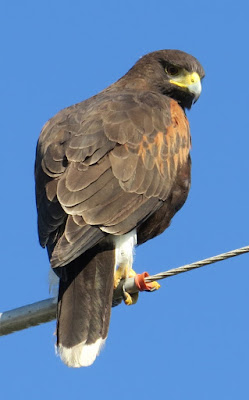 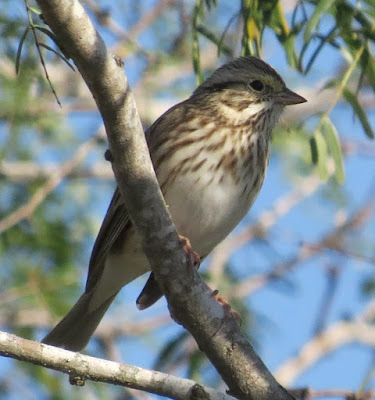 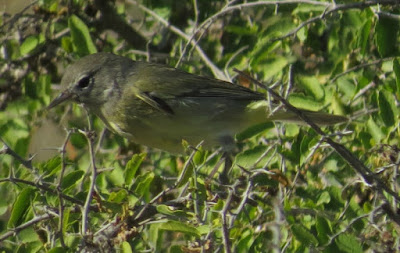 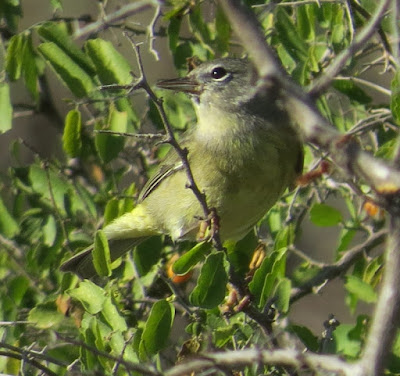 Mike looking for that elusive Verdin along Wildlife Drive 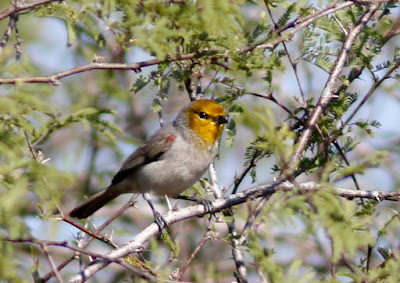 After turning back onto Citation, there’s an old open shed where we had found owls in the past, so as we slowly crawled up, sure enough, a Great Horned flew up into the rafters enough to see his “ears” going back and forth, but unfortunately Mike couldn’t get on him until he flew out the back and into the thornscrub. L  We continued on, enjoying a lovely White-tailed Kite flying around and finally landing on a wire.  We made the turn onto Old Alice, and as that road turned south we had a beautiful White-tailed Hawk on a pole!  After a bit I was shocked to see a sign for the “Grace Heritage Ranch Nature Trail” up ahead; that was totally new since I had last done the route!  So I talked Mike into trying it out:  there’s a shorter half mile loop and a longer mile loop (we took the former) and really didn’t see anything except a fussing flock that we were hoping was mobbing an owl, but we couldn’t find the perp.  Got some much-needed exercise in, anyway! 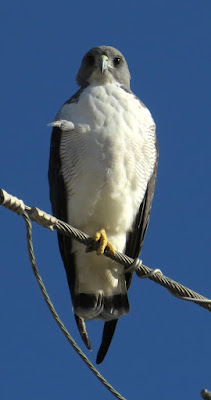 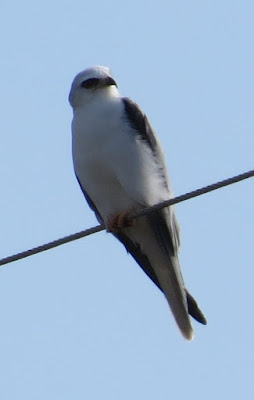 ...not to be confused with White-tailed Kite! 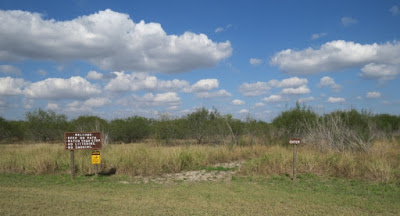 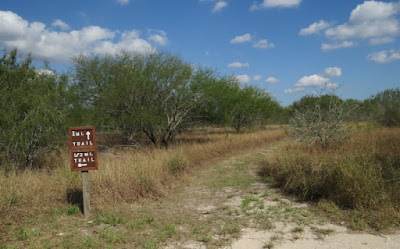 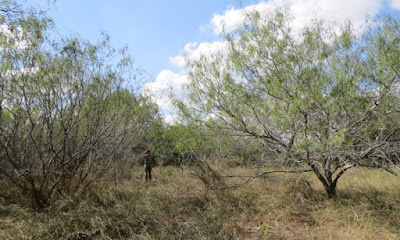 Mike tries to find out what the birds are fussing about...

Continuing up onto the levee we headed to the eastern end where a gate forces a turnaround, and then retraced our steps back past Old Alice Road, past the actual Santa Monica Wetlands (which were dry as a bone) and eventually on to FM 1420.  Along the way we picked up Horned Larks, a couple of Eastern Meadowlarks, a heard-only Sandhill Crane, and yet another Sprague’s Pipit!  Heading north from there and west on FM 1018, we checked out “Primrose Path” (CR 375 on Google Maps) where historically we’ve had Prairie Falcons and Mountain Plovers, but no luck this time – even the pond that can be very productive was bone dry!  So that road was a bust (and when you look at the satellite version of the area in Google Maps and realize how many fields those plovers have to choose from, you realize what kind of a miracle it would be to happen upon some)!


We had just enough time to check out Port Mansfield, so dumping out on FM 498 we returned to FM 1420 and headed north, but suddenly I spotted an Armadillo feeding along the road right out in the open!  I slowed and pulled over, asking Mike if he wanted to go back for it, and about the time he said, “yes,” we noticed a blob in the grass ahead of us which turned out to be an adult Cooper’s Hawk!  Thank God there was no traffic as I straddled the road so Mike could get a crippling photo of the thing!  And what was even more amazing was yet another Armadillo routing around in the grass just beyond the hawk!  After the hawk left the Armadillo scampered into the bushes before we could get a shot… 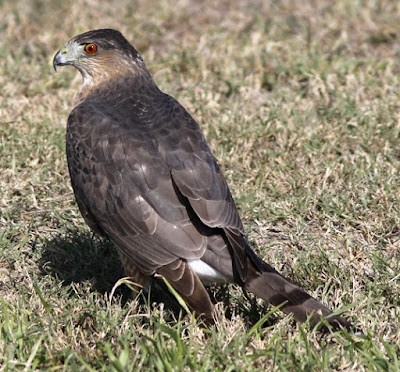 We headed up to SR 186 and blasted east (and pointed out Sacahuistale Flats on the fly) to Port Mansfield and the Laguna Madre Rec Area.  Padded the list with a few coastal birds, but nothing unusual (a white morph Reddish Egret was nice), before heading over to Fred Stone County Park (and enjoying all the White-tailed Deer; I warned Mike that he’d probably see more than he’d ever want to see in his life J)!  I had never been to the area in the afternoon, and the light was wonderful; we had quite a few nice things at the end of the road there, like lots of Caspian and Forster’s Terns, a Caracara fighting with two vultures over a meal, and some neon-legged Ruddy Turnstones.  But alas, it was shortly time to head back to Alamo, with the promise that I’d stop for geese, cranes, or Prairie Falcons!  (We didn’t see any…)  But we ended up with a nice list of 77 species for the day. 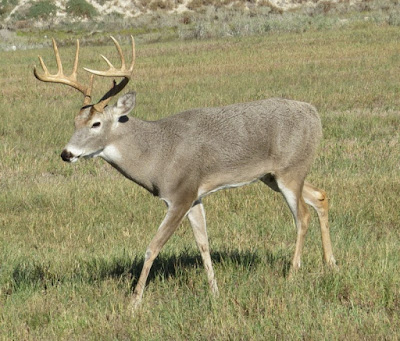 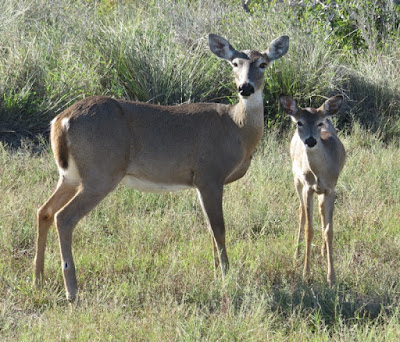 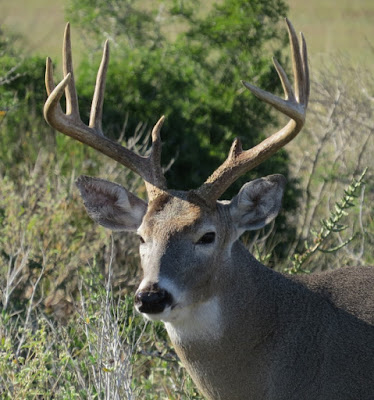 Close-up of the stag 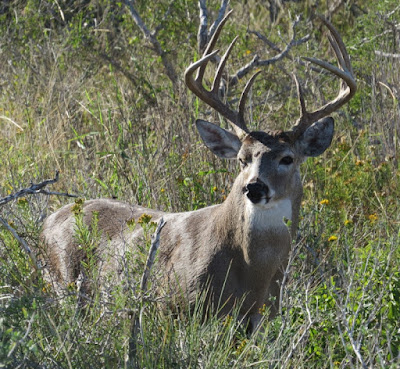 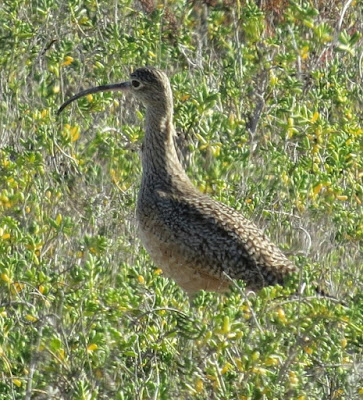