Keith very kindly took Mike to Bentsen while I waited for the Subaru guys to test Heppy and ultimately give him a new battery and update his computer (interesting how they theorized that that could have been causing a power drain), then I met them over there.  Once at Bentsen, however, I hadn’t gotten far before a group of butterfly-watchers announced that they had a Tropical Greenstreak!  After rushing back to the car for my camera (which I didn’t think I’d need since I was just picking Mike up – ha) I joined the group and enjoyed the little green guy as debates went on amongst the group as to whether it was really a Tropical or Clench’s Greenstreak (and the difference is in the color of the face - !!!)!  They eventually did settle on Tropical (although that face looks brown to me, which would lean towards Clench's...) 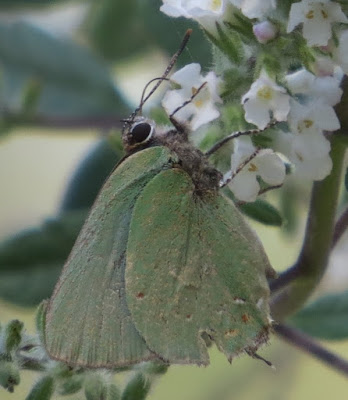 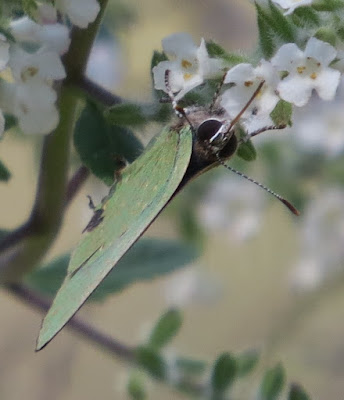 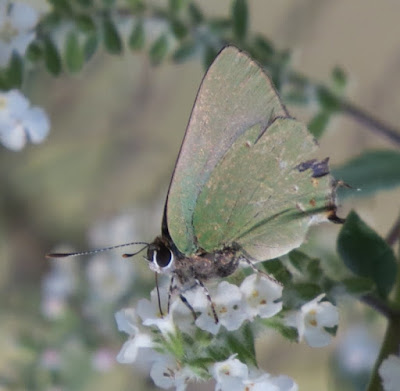 After eventually tearing myself away from that I checked in and met the guys as they were coming back from the primitive camping area; they had walked the entire loop and had spent considerable time on the Hawk Tower, getting lots of Turkey Vultures and a distant Gray Hawk, but no Hook-billed Kites L.  Mike was able to get additional photos of Green Jays and an Altamira Oriole at the feeders, but alas no Clay-colored Thrush joined the lunch crowd.  I think they said they had bagged the Black Phoebe at the canal going in; I know I got ‘im, but I’m afraid I was tuning out the other birds where my own day list was concerned… 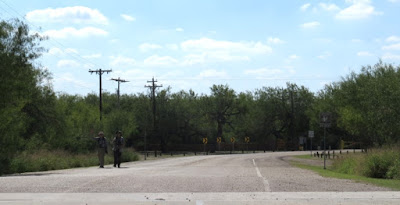 Mike and Keith come to meet me half way!

So once they got something cold to drink, we were off for Sparrow Road!  Mike had mentioned how much he enjoyed the road birding, so especially after that major hike he just did, I figured this would be a welcome diversion.  I opted to start at the north end, where historically all the rarities had shown up (Mountain Plover, Ferruginous Hawk, and Prairie Falcon to name a few), but try as we might, we couldn’t even kick up a Horned Lark for the first time in my life doing that route!  But Mike once again spotted the prize, as a nice Sprague’s Pipit was bopping along outside the car!  Later we had several singleton or doubleton meadowlarks that I wasn’t comfortable calling Western, even though they were in the barren fields (and they stayed stubbornly quiet), but later we did see one that had enough of a yellow malar to confidently call a Western.  The only other Barren Field Bird was a strutting Caracara. 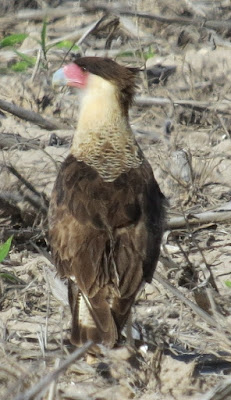 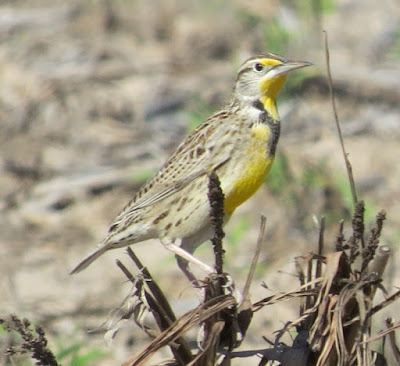 Silent meadowlarks in winter can be a tough call, as sometimes the amount of yellow on the malar isn't consistent.  The paler malar on this bird would suggest Eastern, but plowed fields are the preferred habitat of Western.

Further south we got into the thornscrub and grassy area on 14 Mile westbound where we had more action:  several Pyrrhuloxias bounced around, and this is where Sparrow Road lived up to its name:  Cassin’s, Lincoln’s, Savannah, Black-throated, and even a White-crowned Sparrow gave great views!  (We added Lark Sparrow further south…)  One of those huge new power poles proved to be a great perch for a Red-tailed Hawk; he sure looked tiny way up there!  Mike managed to get on an Orange-crowned Warbler and Blue-gray Gnatcatcher on his side of the car, but the calling Verdin was as obstinate as ever…  Nearing Jara Chinas a covey of Bobwhite ran across the road, but unfortunately were too fast for Mike’s camera…  One of the oddest sights was this elongated thing attached to one of the fence wires that initially looked either like an impaled shrike dinner or the aftermath, but upon closer inspection I think it was a cocoon of some sort!  It was pretty big – about two inches long…  [Update:  several Facebook friends suggested bagworms!] 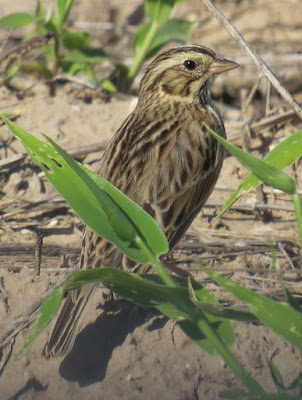 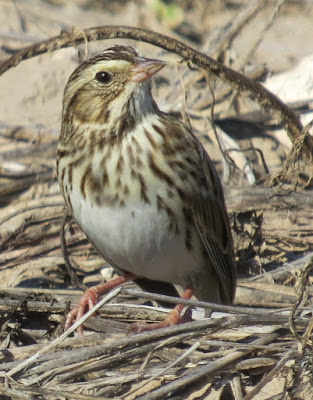 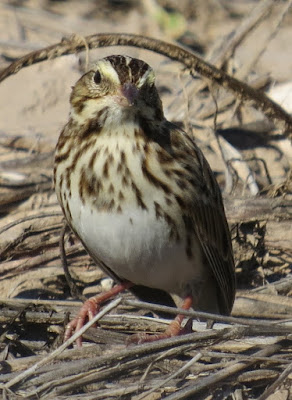 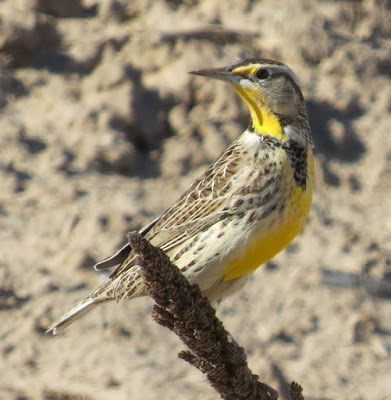 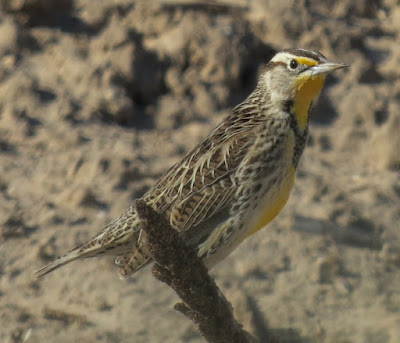 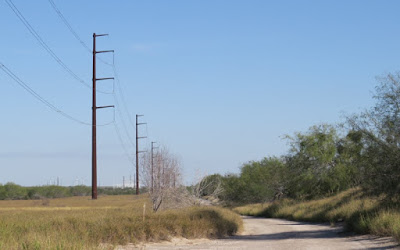 The end of 14 Mile with the giant power poles 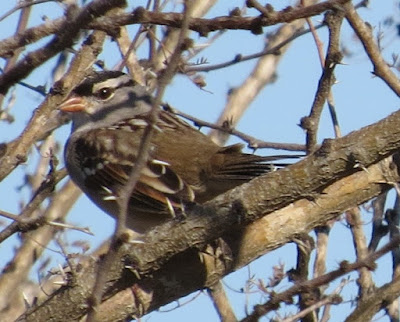 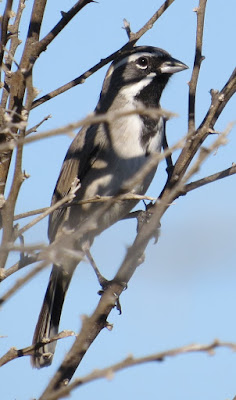 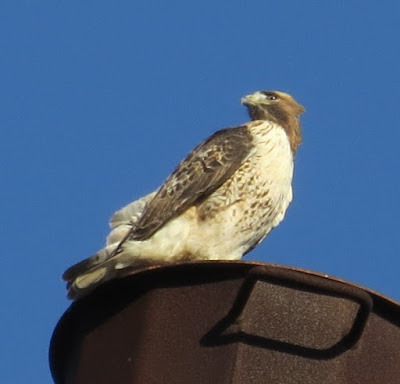 Red-tailed Hawk surveys his territory from on high...


We crawled slowly down Jara Chinas after that, which took us right up to sunset (I was hoping for a Great Horned Owl to materialize, but no banana).  At one point Mike spotted a Cooper’s Hawk sitting on the right ahead of us, and as I watched (you had to have a video to appreciate it), the bird seemed to hop up, suspended in mid-air for a brief moment, and then dove forward and across the road!  What a performance!


Things were very quiet except for shrikes and Mockingbirds; I scanned the fields for possible plovers and falcons, but the two false alarms that made me yank out the scope were both Kestrels (how can such a tiny bird look so huge at a distance??).  Somewhere along the line we had an adult and immature White-tailed Hawk involved in a dogfight, which led to a discussion about how Bill Clark (Mr. Hawk himself) enlightened me as to the difference in the shape between immature and adult Whitetails (youngsters look much more slender in the wings than the “fatter” looking adults)!  We trolled for Cactus Wren at a couple of hopeful-looking spots, but nothing responded.  We saw lots of Caracaras apparently heading to roost, and the last birds of the day as the sun went below the horizon were a pair of Harris’ Hawks right next to the road.


The bird list was meager (there would probably be many more if I added what Keith and Mike saw at Bentsen), but the close looks at sparrows and the Sprague’s made it worthwhile!  Bird List: