Todd only had a couple of Valley specialties to get under his belt (although a handful of other more widespread lifers would have been nice), so we made plans to hit all the regular Aplomado Falcon haunts the next day, followed by the only hotspot with a fairly recent sighting of Ringed Kingfisher that you could theoretically get from the car:  Delta Lake!  Reason for that being that the forecast called for highs in the mid 40s and drizzly rain with wind all day, and that’s exactly how it panned out – it was a miserable day!  But we made it safely to our first destination, Boca Chica Boulevard, and cruised the road slowly looking for falcons, checking the hacking platform and reasonable-looking perches.  We did find a Harris’ Hawk all hunkered down, along with a few Sandhill Cranes flying over the road!  Along Palmito Hill Road we at least heard a few things, best of which was a Long-billed Curlew, but about the only thing we actually saw were some flyover White Pelicans!  We tried calling up Cactus Wrens but they were smarter than we were… L 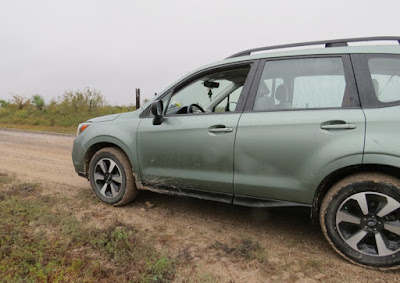 Heppy had a pretty good layer of mud on his "feet" after traversing Palmito Hill Road!

We didn’t go beyond that, but instead opted to head up to Old Port Isabel Road, where we knew that, with this weather, we weren’t gonna get beyond the pipeline work entrance (that’s when the “good” part of the road ends and the “crappy” part begins…).  That hacking platform was empty as well, and the birdlife was even more sparse:  we heard a couple of meadowlarks, spooked up a couple of Savannah Sparrows, and had a Tropical/Couch’s type kingbird near the chicken coops.  As it turned out, we wouldn’t have been able to go beyond the pipeline work entrance even if we wanted to, as the big rigs were lined up to get in and effectively blocking the road!  So we figured that was a good place to turn around…


Since we were going by it anyway and there had been historical reports of Aplomados, we swung by Palo Alto Battlefield for a brief look, picking up a lovely male harrier for the day, but also several Killdeer feeding in the grass.  We picked up SR 100 by way of Los Fresnos, and that stretch seemed empty of all raptors except for Kestrels!  Past the official falcon viewing area we did see a largish raptor hunkered next to one of the tall power poles, so we pulled over to look, and Todd’s camera (which was better than a scope when you were in a hurry J) revealed it to be a Peregrine, which was a new bird for his trip! 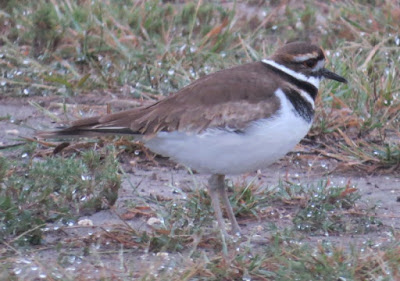 From there we went through Laguna Vista, picking up a mob of Black-bellied Whistling Ducks in Roloff Park!  We went up Buena Vista Road as far as we could, only picking up an Osprey in a field, so we backtracked to FM 510 and took FM 1847 up to the newly opened General Brant Road, and it was glorious (to drive – the birdlife still stunk)!  Along that stretch (and heading in to the Laguna Atascosa NWR visitor’s center) we had a grand total of six species, the best of which was another harrier!  It was too cold and windy to even watch the feeders for very long, so we checked in and then headed to Osprey Overlook just to pad the list.  We didn’t stay up there long, either – just long enough to ID a flock of peeps on the shore (Westerns) and run back to the warmth of the car!  After jumping in a mob of ducks flew by that were probably Redheads, as they looked “pochard-y” through the windshield…  A flock of Pintail flying over the car while we were heading out was a nice addition.  A White-tailed Deer crossing the road several times was the mammalian highlight. 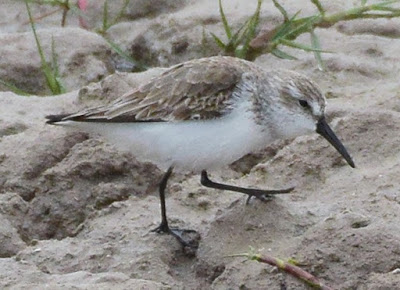 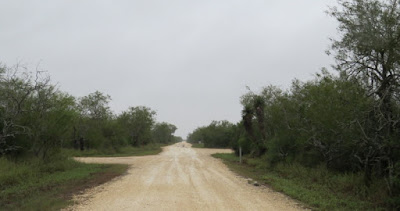 
We logged a grand total of three species going back out General Brant before heading over to Delta Lake, hoping to find some geese in a field somewhere, but again, they were smarter than we were…  Although we didn’t see any kingfishers of any kind, we were rewarded with somewhat of a decent bird list despite the wet and cold:  a stately Great Blue Heron greeted us along the canal, and a pair of Caspian Terns accompanied us along the road!  In the “back section” one tree was loaded with Yellowrumps and Orange-crowned Warblers, while Killdeer and Starlings fed side by side in the grass.  Back in the big picnic areas a Ladder-backed Woodpecker almost let Todd get a picture J, while a brilliant Vermilion Flycatcher allowed wonderful photos!  Finally, on the lake itself, we hit the jackpot with two different rafts of ducks:  on the west side were Coots, Pintail, Shovelers, and Blue-winged Teal, and on the other side were the pochards:  Canvasbacks, Redheads, Ring-necked Ducks, and scaup (with a Pied-billed Grebe thrown in)!  The Tree Swallows didn’t seem to mind the rain, either, as they were swooping around in force! 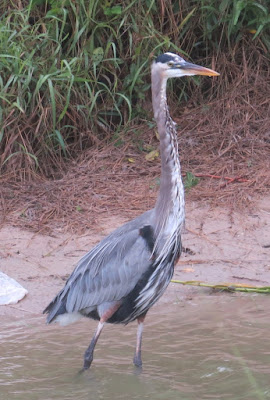 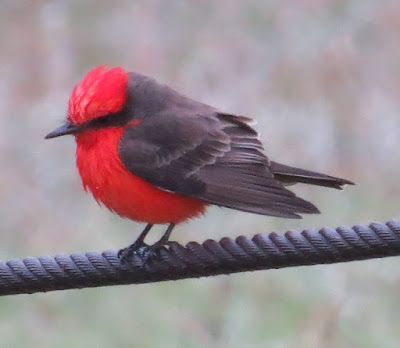 
We were ready to call it a day after that, but on the way home we passed some Snow Geese in a field (granted, only five birds, but we were happy to see them)!  We were shocked that we did as well as we did, with 50 species for a miserable, wet, cold, and windy day (and I got word that it was supposed to SNOW here the next day!!!)! 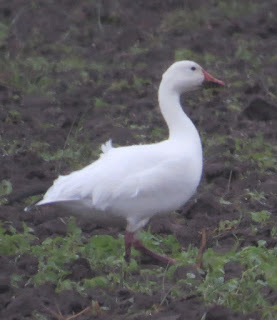